Sony is the company that created and once dominated the market for music on the move. However, it has had something of a torrid time recently in that regard having seen the word iPod take over from Walkman as the de-facto brand for portable audio in the 21st century. But now it wants its market back.


It’s problem stem from the fact that it simply hasn’t had the products that people wanted. Since Sony invented the Walkman the company has changed. It is no longer just a vendor of consumer electronics, but also a multi-faceted producer of content through its Sony Pictures and Sony Music divisions. But by trying to create a synergy between its products and its content, Sony missed the bigger picture. For years it has been obsessed by its own proprietary ATRAC codec and DRM while the rest of digital world was going with open formats such as MP3. Thus quicker, smarter and more savvy companies such as Apple have been able to sweep in and take large chunks of its mindshare and market share.


But like a sleeping giant awakening there are signs that Sony is rousing. Last year it finally got round to adding native MP3 support for its flash based MP3 players and also released a hard disk based player – only weeks after denying to us that it would ever do such a thing. This player was the NW-HD1 which Riyad reviewed here. This product had only a short shelf life, with this new player, the NW-HD3, following on only a couple of months later. This major difference was that the HD3 added native support for MP3 from the get-go without having to recode the tracks to its native ATRAC format. (A firmware update for the HD1 is also available). Other than that, the changes to the HD3 are subtle. The screen has been moved a little and it’s now available in four colours, silver, blue, red and a rather nifty looking black. Oh, and Sony has decided follow Apple and remove the dock from the box. This is a shame as it was quite cool looking and wrapped around the chassis nicely. It’s also been introduced at a slightly lower price than the HD1 and most online retailers have it on sale for about £220.


Fundamentally though, it’s still the same 20GB capacity player, and unfortunately you still need to use Sony’s infamous SonicStage software to get your music onto it. The unit does appear in Windows as a drive letter and you can drag and drop anything you want onto it but you can only play audio on HD3 if it’s been transferred by SonicStage. To hook up the player to a PC though you need to attach a USB adaptor. This means you have to have this with you if you want to use it as an external drive so there could be instances where you don’t have it with you, which could prove frustrating.

SonicStage has greatly improved since it was first introduced but Sony has only succeeded in uprating it from utterly and truly god-awful, to slightly bizarre, unintuitive and clunky. And while native MP3 support does make transferring tracks much easier, it still irritated by throwing its hands up and refused to transfer over two MP3 tracks from an album that it otherwise had no problems with. Perhaps it just didn’t like Duran Duran. Well hey; perhaps they slipped in a taste filter as well.


As Riyad pointed out in his review, a classic ‘bizarro’ feature is how it handles, or rather doesn’t handle Playlists. I managed to work out the rather convoluted way you put these together but when you actually transfer these over it actually transfers over the same tracks again. This means that if you set up 20 playlists with the same track it will copy it over twenty times, – madness! Way to go on the intelligent space saving Sony.


It also crashed while trying to encode a test CD. Closing and restarting SonicStage solved the issue but it was annoying. Then there was the fact that you can’t select a folder and drag and drop it into the SonicStage library – you have to go into the folder, select all the tracks and then transfer those over. What’s that all about?


Another unsettling feature of SonicStage is that its doesn’t actually synchronise the contents of its library with the HD3 automatically. It will transfer over new tracks but when I re-labelled an album with the correct genre in the library, this information wasn’t passed to the album on the player on next sync. Apparently, Sony has SonicStage 3.0 lined up with a number of enhancements, including drag and drop support for playlists, so let’s hope it’s a genuine improvement.


As well as MP3, it of course support Sony’s ATRAC3 codec at 66, 105 and132Kbps and ATRAC3plus at 48, 64 and 256Kpbs. ATRAC3plus is the 2004 update for ATRAC, originally introduced with the Minidisc format. As you can see from the diagram, (by the diagonal lines) Sony believes that 64Kpbs plus is as good as 132kbps ATRAC3. Meanwhile ATRAC3plus at 256kpbs is judged to be ‘near CD quality’ – and better than the 292kpbs bit-rate used in older Minidisc decks. 256kpbs ATRAC3plus does indeed sound fantastic but if you use this exclusively the file size is such that the amount of tracks you can store drops from 13,000 at 48kpbs to 2,500. The choice, as they say is yours. 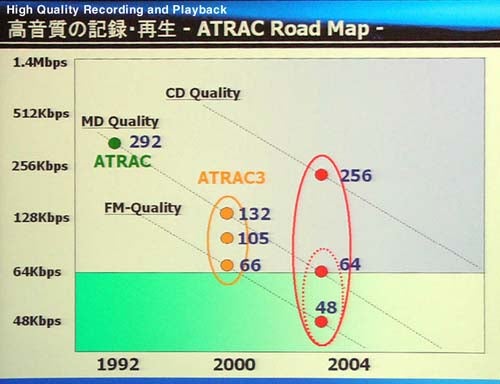 Battery life is still listed at a healthy 30 hours, but this is only for when all tracks are encoded at 48kbps. If you use higher bit-rates the processor will have to work harder so battery life will drop. It’s still a lot better though than the 12 hours offered by the current 20Gb iPod.

I won’t go into great detail about how to operate the player as not much has changed since Riyad covered the HD1. Generally speaking though, the interface is fine, though not as impressive as the arrangement on the iPod, or indeed the Creative Zen or iRiver H10. However, it’s not too bad, though scrolling though a long list of artists or albums could get tedious.


With its metal casing the NW-HD3 feels well built, though as with any player I’d recommend getting a protective case as soon as possible. At least Sony has ensured that the slot underneath where you attach the USB connector has a internal flap so that it’s not exposed as it is with many players such as the iPod and the iRiver H10, which instead rely on a piece easily losable plastic.


Sony also claims that the HD3 has some drop resistance thanks to its G-Sensor, which can detect the unit is being dropped and move the recording head away from the disc platter to protect it.


It fits snugly into the hand or pocket and at 130g is lighter and smaller than the 158g 20GB iPod. The screen is a nice high resolution display, is clear to read and usefully tells you what codec the track is playing and the bit-rate, which the iPod doesn’t do.


The supplied headphones aren’t too bad as bundled headphones go but we’d still recommend changing them for something better. To test sound quality we used set of superb Koss Porta Pros. Comparing closely with the iPod I found that the HD-3 had a warm bassy sound that was pleasant to listen too for extended periods. However, the iPod has a slightly more detailed, accurate sound. If sound quality is paramount it might be worth a trip to a store to compare the two and see which you prefer.


I discovered several reports online of users complaining of background noise from the unit, but I couldn’t detect any signs of this on my review sample. Additionally, some users have complained that the top-end volume level is too low but this is because it had been restricted to meet with EU requirements. If you want to circumvent this a Google search should help you find instructions on how to enter the service menu and increase the sound pressure level, though you’ll at risk of ruining your player if you aren’t careful.


As a long-time iPod user I have to admit to being impressed with the HD3 as a piece of hardware and the ability to play MP3 tracks natively is a huge boon for functionality. However, while SonicStage is making slow gradual improvements with each version, it still a long way from getting close to the ease of use of iTunes. Also if you’re interested in buying music online, choosing between SonicStage and iTunes also means choosing between Sony’s online Connect store and Apple’s iTunes store – again, not much of a contest.


As a piece of hardware, the HD-3 is a success, being smaller, lighter and generally sleeker than an iPod. However, as with the HD1 before it, the SonicStage PC software holds it back from being a serious competitor to the iPod. Thanks to the addition of native MP3 playback the HD3 is worthy of consideration but only for those prepared to put up with SonicStage’s idiosyncrasies. For the masses though, the iPod is still the way to go.