According to Thomas Edison “genius is one per cent inspiration, ninety-nine per cent perspiration”. It is a phrase that nicely sums-up the slow and somewhat painful evolution of Sony’s Music Unlimited audio service, and while it still remains a long way from genius, there is no doubt its IQ is on the rise.

What is Music Unlimited?
First announced way back in September 2010, Sony initially took the baffling decision to focus ‘Qriocity Music Unlimited’ on its smart TVs and PS3 games console. It launched an Android app in June 2011 and dropped the messy Qriocity (pronounced ‘Curiosity’) branding, but only with this month’s long awaited launch of an iOS app do we finally have a multiplatform service to potentially rival Spotify and Rdio. So does it measure up? 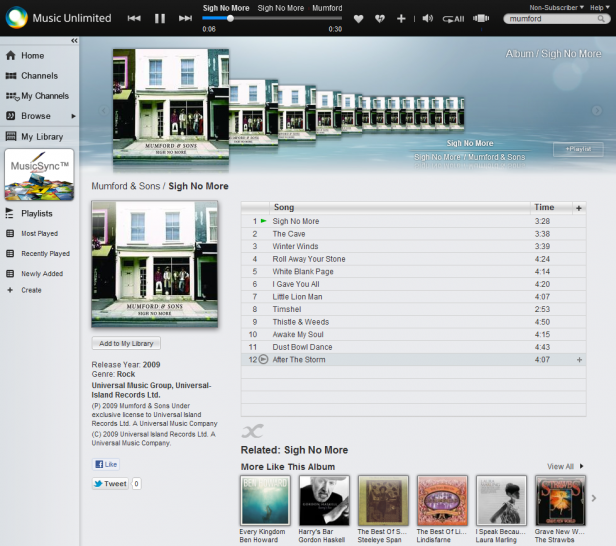 Concept
In many ways Music Unlimited is both more ambitious and more limiting than its rivals. In the plus column is the fact it is built into the wider hub of the Sony Entertainment Network, which includes Video Unlimited and the PlayStation Network (separate subscriptions). In addition it is plugged into Sony’s existing ecosystem of PS3, PlayStation Vita and Bravia smart TVs as well as its (and all third-party) Android smartphones and tablets. In this sense no other service is as comprehensive for Sony aficionados.

Where things take a more familiar turn is the primary functionality of Music Unlimited itself. Users can create playlists, share their listening on social media and download music for offline listening. Like Rdio (but not Spotify) it also can add searched-for content to a library of music sorted by artist, album and song and will scan and match your PC’s existing digital music collection. Furthermore Sony claims to offer industry leading streaming performance thanks to its own highly efficient codecs (more of which later). 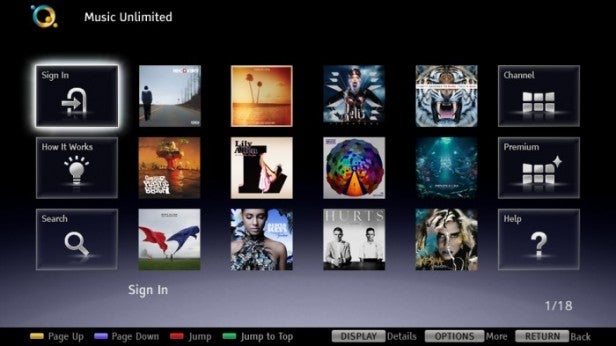 Apps
As we mentioned in the intro, what marks Music Unlimited’s true arrival on the streaming music scene is its support for the biggest platforms. It gets around the usual Windows/Mac issues by basing its computer client in the browser and for the most part this works well. The client is a little sparse, but a side column of playlist and collection links with pinned playback controls and a search bar along the top make navigation simple. The flaw is a consistent one throughout Music Unlimited platforms: the lack of settings, with only the toggling of explicit content offered.

When it comes to Bravia TVs and its consoles, little has changed from the original Qriocity service we reviewed in January last year with Sony switching to a grid layout for viewing search results while playback moves to a hybrid Xbox/iTunes Cover Flow UI with tiled cover art. It is simplistic to say “if it isn’t broke don’t fix it”, but Sony can get away with it on this occasion.

As for mobile devices Android and iOS users will discover a wildly different experience. For all the hype Sony’s iOS app is currently extremely limited. The interface is similar to its Android counterpart, but it so far lacks offline playback, social media integration and even the ability to sign up for the service using the app. There is also no dedicated iPad app yet. Music Unlimited has arrived on Apple devices, but it is very box ticking and not much more than a beta release. As it stands BlackBerry and Windows Phone users also remain out in the cold.

Catalogue and Performance
Of course, apps will evolve over time, so the key to any successful streaming music service like Sony Music Unlimited is the quality and quantity of its content. Perhaps surprisingly Sony has deals with all three other big record labels (Universal, EMI and Warner) and offers a Spotify/Rdio-equalling 15 million tracks.

It is impossible to say which service has more of any one particular type of music without an army of testers spending weeks performing searches, but we were pleasantly surprised to find it feels just as comprehensive as both its big rivals across a wide range of music and independent artists are well represented.

More controversial, however, is Sony’s approach to streaming this content. The company uses the high efficiency advanced audio coding format HE-AAC v2, which retains fidelity at much higher compression than MP3. The problem is Sony takes this to extremes and Music Unlimited streams audio at bitrates of just 48Kbit per second – well below the ‘up to’ 360Kbit encoding of its rivals. The upside is content buffers very quickly, particularly on mobile devices, and is highly reliable on the move. For those on limited tariffs it is also worth mentioning this will consume far less data.

In practice sound quality is pretty good and most casual listeners will be perfectly happy. Where problems arise is for audiophiles as playback on premium speaker systems and ear/headphones where the audio is revealed to be slightly flat and rounded with narrow range. There is great potential for high efficiency coding in this sector, but Sony does need to up the bit-rate or at least offer higher quality streaming over Wi-Fi and for downloading offline. 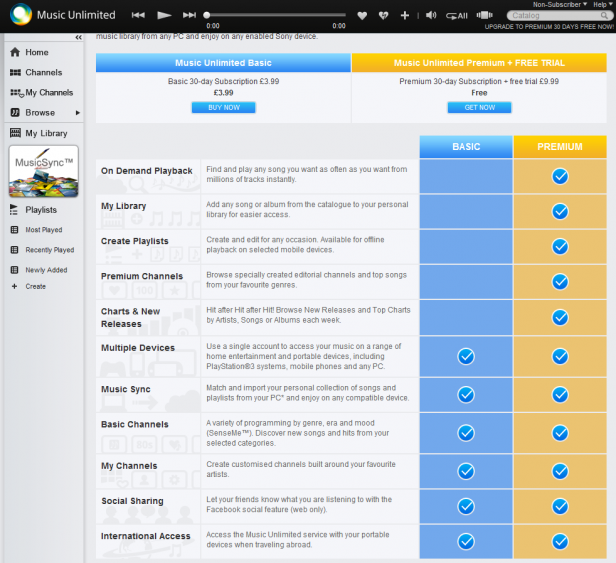 Value
On the surface Sony offers the cheapest streaming service in the UK with the ‘Basic’ subscription just £3.99 per month. The trouble is this is heavily cut down and works purely as a music locker letting you sync your existing music collection, there is no access to Sony’s content, playlists, charts or new releases. To get the full experience therefore requires a ‘Premium’ subscription at a more familiar £9.99 per month making it no cheaper than any other service. Furthermore while Sony offers a 30 day free trial to new users it requires credit card information which will begin charging automatically if you do not cancel.

As such the me-too nature of Music Unlimited means it is currently only for the most ardent users of Sony hardware.

Verdict
Music Unlimited’s widened platform support has seen it finally emerge as a rival to the all conquering Spotify and exciting UK newbie Rdio. The trouble is iOS support is basic at best and it still lacks both BlackBerry and Windows Phone apps. Furthermore while the use of high efficiency audio coding makes streaming on the move reliable, audiophiles will be dissatisfied with the rather flat performance and lack of a ‘high quality’ option. Sony has the financial might to make Music Unlimited a huge success, but as it stands the service remains a work in progress.