Headphones are trendy, but that doesn’t mean everyone wants to spend £200 on them. The Sony MDR-ZX310 are some of the cheapest on-ear headphones you can get from a well-known brand – names don’t get much bigger than Sony.

For under £20 they make a good emergency backup pair, or one to use guilt-free down the gym. But there are a few design and sound compromises you’ll have to live with. 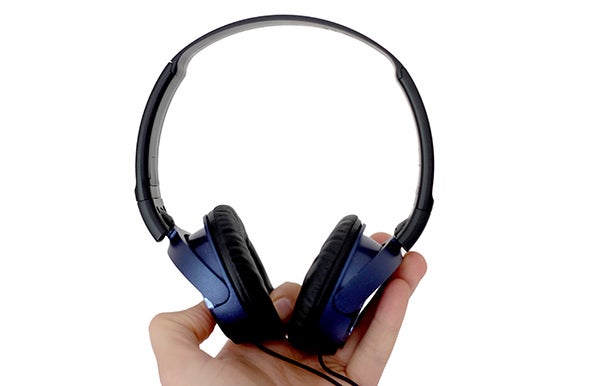 The Sony MDR-ZX310 are on-ear headphones, the same style as the Beats Solo 2. This is often the best kind to go for if you want portable headphones, but don’t want in-ear ones that dig into your ear canal.

They’re relatively petite, and will attract a good deal less attention than giant over-ear headphones. We think as far as on-ear headphones go, the Sony MDR-ZX310 look pretty good too.

While all-plastic, the back of the ear cups are finished with a shiny (but low-key) concentric circles design, and they have a dose of classic Sony style. Upon more critical inspection the dark blue on black two-tone design of our review pair doesn’t entirely work, but you wouldn’t instantly assume the MDR-ZX310 are as cheap as they actually are. 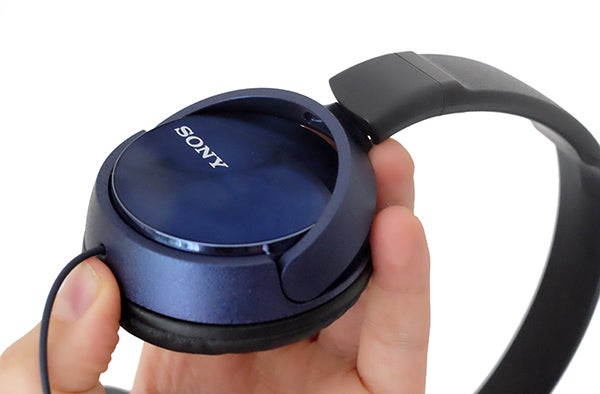 Get a bit closer still and the compromises become a bit more obvious, though. The Sony MDR-ZX310 headband is made of plastic where slightly pricier headphones have a skeleton of steel to give them a bit more strength. While they’re not a creaky embarrassment – far from it – they’ll fall apart a bit more readily than tougher, more expensive pairs if you’re exceedingly nasty to them.

The fake leather-topped pads are also slightly cheap-feeling. ‘Pleather’ is often criticised, but high-grade examples of it can feel just like the real thing. The Sony MDR-ZX310 pads are a bit plasticky, and the pads themselves quite thin. 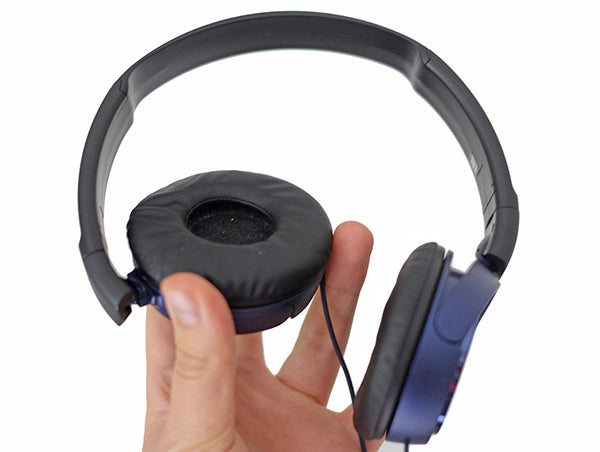 However, we don’t find them particularly uncomfortable, largely because of one factor – the MDR-ZX310 are extremely light. This is how they get away without using any headband padding at all (it’s bare plastic), and can be used for jogging without a tremendously tight headband. It’s no triumph of engineering, but there’s definitely a basic appliance of science here.

Let’s be clear, though – the MDR-ZX310 do not feel hugely comfortable. They merely do the job without discomfort. There’s a difference.

The headphone cable is non-removable and it feels a little thin and cheap, but you do get a one-button remote. As it has a single button rather than three, it’ll work across iPhones and Android phones. 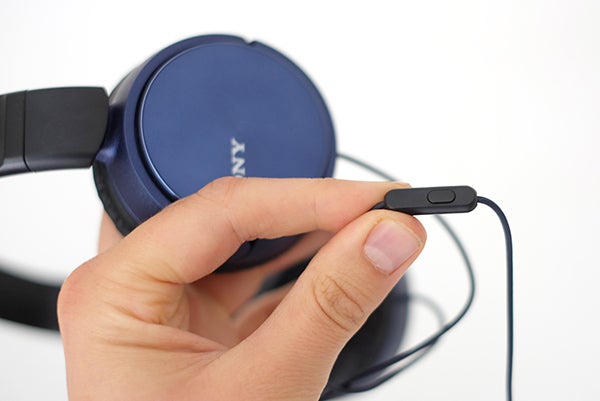 The Sony MDR-ZX310 take over from the long-standing ZX300 model, which has proved extremely popular. Mostly because of the price.

The difference between the old ZX300 and new ZX310 is that this pair has a fold-up design. The cups fold up with a hinge that sits right by where the cups meet the headband. It makes them a fair bit smaller to store – perfect for stashing in a bag. It’s a great feature to have in on-ear headphones like this, though if you consider headphones to be a form of neck jewellery when not in use this may not be a concern. 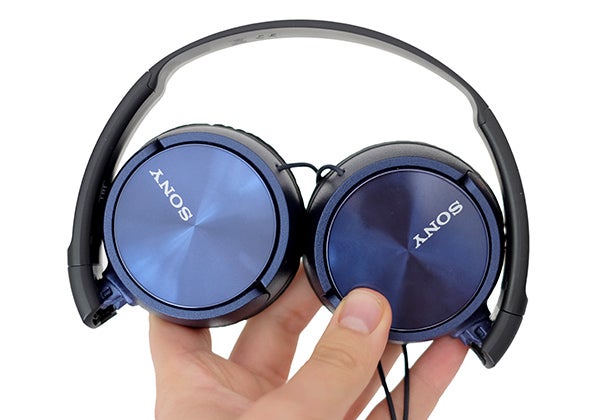 Other than this design change, we wouldn’t be surprised if Sony hasn’t significantly changed the sound signature since the MDR-ZX300. There’s still a meaty bass skew, but the sound is thankfully not completely murky as it is in some real entry-level headphones.

Sony really had to put some bass emphasis in the Sony MDR-ZX310, because it’s simply what most people are after.

Unfortunately, while not absolutely huge, the bass is not well controlled. It may not cause nasty low-frequency resonance when simply dealing with voices, but give the Sony MDR-ZX310 a bass drum and it will dominate – the bass is quite muddy. You’ll notice this much more if you’re sitting in a quiet room listening, rather than out in town or at the gym, though. A bit of unruly bass is much less of an issue if you’re looking for a full out-and-about pair. 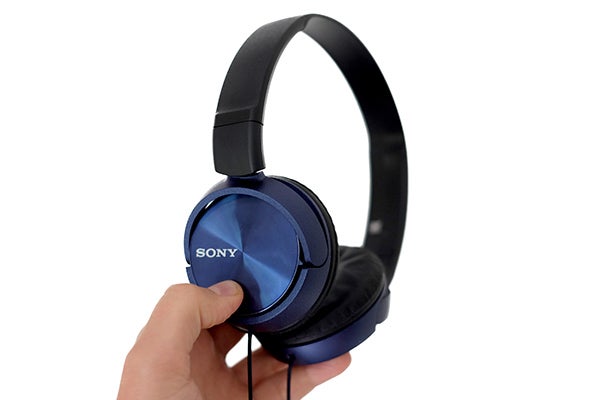 The mid-range is also quite dead-eyed and flat-sounding, though, making vocals lack the excitement and vivacity they might have through a more accomplished pair. Where the Sony MDR-ZX310 succeed, though, is that they don’t have a harsh or particularly tiring sound. They may not inspire awe, but they’re not going to cause you pain either.

Just as people say it’s mad to spend hundreds of pounds on headphones when the difference in sound quality might be measured in a fairly small ‘percentage number’ (something we don’t generally agree with), It’s probably worth spending a bit more if you can. Or, if your ears can handle it, IEM earphones tend to offer better sound at this entry-level price. 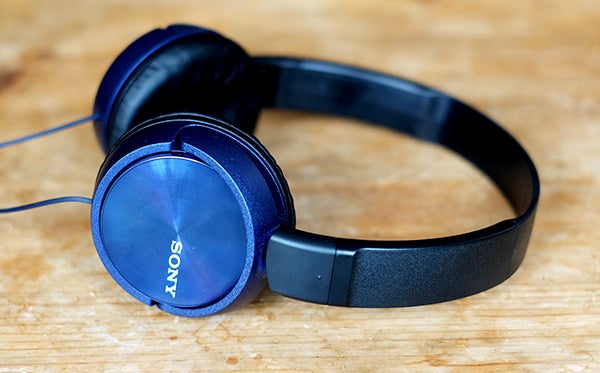 The Sony MDR-ZX310 do not set a new standard at the price. However, we still think these headphones are a good solution for those who want a second pair to use for less demanding listening, or to accompany a set you really don’t want to damage. While not the last word in sound quality, they’re cheap, fairly good-looking and practical

What else can you get at the price? If you don’t want to go in-ear, the Koss Porta-Pro are class on-ear headphones, but they do cost around £10 more. While we’ve not had a chance to A/B compare the two yet, the Sennheiser HD201 offer a less bassy sound, although we think the look of the Sonys is a bit better.

The Sony MDR-ZX310 are entry-level headphones that are perfect as a second back-up pair. They’re not the last word in sound or comfort, but for the price they’re decent.

Next, check out our list of the best headphones