What are the Sony MDR-Z7?

The Sony MDR-Z7 are big,
super-comfortable headphones: what you should be looking for if you want
something for late-night movie-watching and game-playing. They’ll let
you listen away in style without keeping anyone else in the house awake.

They have a big, bold sound that doesn’t demand a perfectly
silent room to get the most out of. At a push you can even wear them
outside. Add in top-notch comfort and we’re onto a winner.

If
you’re out for the most revealing, searching sound possible, the soft,
caramel-coated mid-range of the Sony MDR-Z7 may not be quite what you’re
after, though. 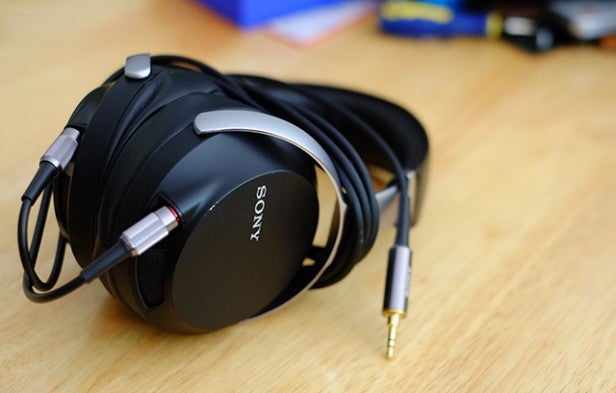 The
Sony MDR-Z7 have the style to pass off as the sort of headphones you
might wear out on the street at a glance. Sony sure knows how to make a
good-looking headphone. However, this set is really much too large to
seem made for the purpose.

They’re even larger than the Beats
Studio. This is not a criticism, we just want you to know: the Sony
MDR-Z7 are really intended as indoors headphones. That said, they didn’t
fare terribly during the supermarket trip we treated them to in order
to test their isolation.

The real question is whether you can wear headphones the size outdoors without feeling like a twit. 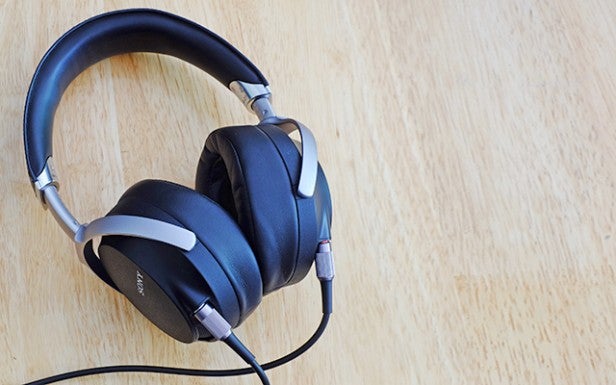 Think
you can? Bear in mind the Sony MDR-Z7 are also not designed for top
sound isolation. While closed-backed they have big open vents at the
bottom of each cup, designed to improve the bass response and help get
you a bigger, airier sound than you normally get with closed headphones.

These don’t make the Sony MDR-Z7 leak so much you can’t use
them in the office, but mean they won’t do so well on the London
Underground. The isolation isn’t up to that. 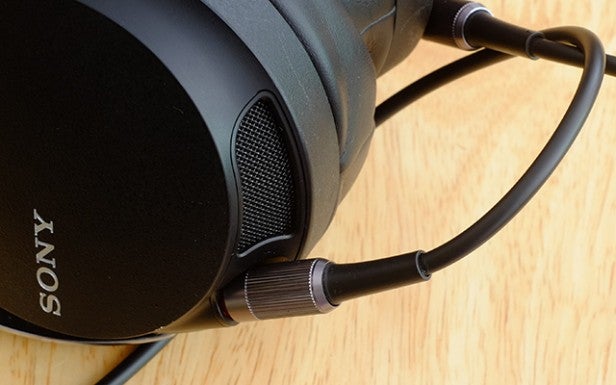 Comfort
is quite terrific, though. Part of the benefit of not needing to be too
small and slim is that the Sony MDR-Z7 can use giant, thick-padded
cups, and generous headband padding. They are luxuriously comfortable,
helping to make the not-insubstantial 335g weight a non-issue.

As
you might guess, though, they’re not perfect for exercise. Have an
indoor gym you’ll want to use them in? Thanks to the depth of the pads
they handle the up-down motion of jogging pretty well. But any
side-to-side motion will soon see them give up their grip. 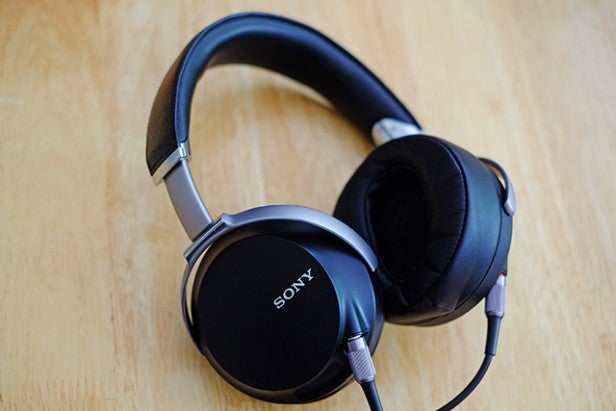 The
Sony MDR-Z7 are also very well-made, more so than they may at first
appear. Despite having the roughened texture often used for plastic, the
rear of the cups is metal,  as is almost every part of the headphone
not covered by leather. The few plastic bits are found right at the
bottom of the headband’s leathery covering.

They use synthetic leather rather than animal hide stuff, but it’s very soft and tough-feeling regardless.

If
you’re expecting loads of fancy features for your £500, you’re looking
in the wrong place here. The Sony MDR-Z7 don’t have wireless or active
noise cancellation. While they’re being launched with plenty of Hi-Res
audio fanfare, they’re actually just good old fashioned headphones you
plug in and that’s it, they work.

The one feature you do get is a
removable cable. They use standard or balanced cables, screwing into
each ear cup nice and securely. You get 2m and 3m cables, as well as a
light, fabric carry case. 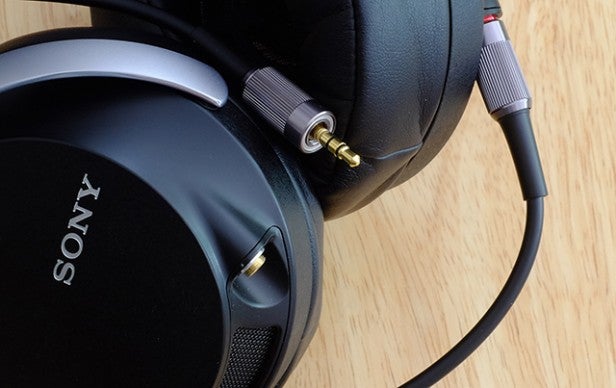 Where
the Sony MDR-Z7 do start doing things is bit different is with their
drivers. They use gigantic 70mm drivers, where most headphones stop at
around 50mm, even the big ones. Sony claims these drivers offer
incredible frequency response of 3Hz – 100KHz. That’s not just beyond
human hearing, but dog hearing too.

In short, let’s not pay too much attention to that spec.

What
the Sony MDR-Z7 do get you is big, expansive and powerful sound. As
hoped, they have the sort of soundstage width you get with a fully open
headphone, without leaking sound all over the room. 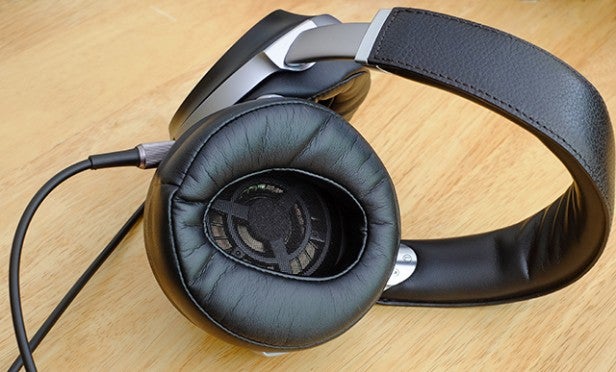 Bass
and sub-bass is also very rich and fat, which you don’t get too often
with fully open headphones. These are headphones with muscle.

As
you’d hope of a pair costing £500, they are also detailed and don’t let
the chunky bass trample over the rest of the sound. Still, we do find
that the signature will not be for everyone, at least not at this price.

There’s a rich thickness to the area where the bass collides
with the mid-range, and it leaves the Sony MDR-Z7 sounding a little soft
in parts compared with some of the best out there. Putting the Z7s next
to the Oppo PM-3 and the classic AKG Q701,
while the Sonys sound quite epic in scale and have a smooth,
ear-pleasing tone, they can’t deliver vocals with the same kind of clear
contours as the best. They are that bit too warm and smooth.

Do you want your music to sound big and exciting or pristine? The Sony MDR-Z7 are better at the former. 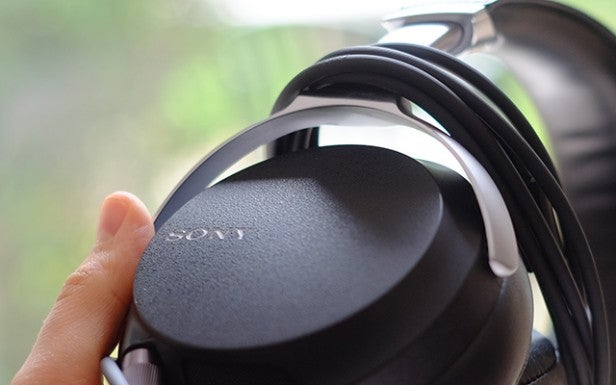 It’s
only really music that is negatively affected, though. If you want
something for movies and games, as well as music, there really are few
better sets out there. The force with which they can deliver explosions
and the like is impressive.

We normally focus on music when
reviewing headphones, but the Sony MDR-Z7 do deserve a bit of special
attention in this area. They are just so ‘at home’ sitting on top of an
AV receiver for those times when using a 5.1 system just isn’t going to
work, and we’ve spent a good few evenings using them at that 10:30pm cut
off when it’s usually “turn it down or turn it off” time.

They
are also very sensitive, meaning you don’t need to use them with a
separate headphone amp to get a good level of volume out. Despite having
70mm drivers, the Sony MDR-Z7 can be driven pretty well off a mere
mobile phone. 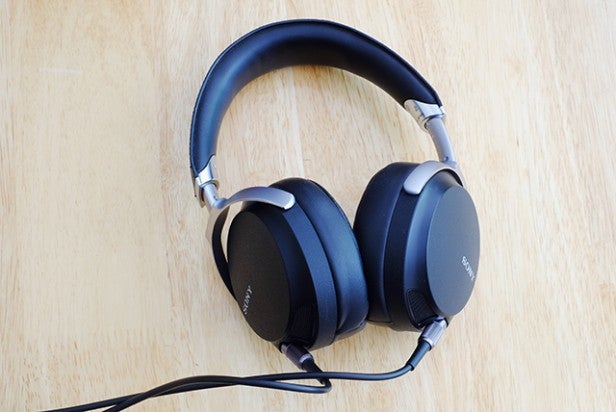 Should I buy the Sony MDR-Z7?

Despite
costing half a grand, the Sony MDR-Z7 are headphones made for real
people. They’re not just about sound, they also consider the context in
which they’ll be used.

After all, not everyone with £500 to spend on headphones has a detached house in the country in which to listen to the things.

Thanks
to a combo of near-perfect comfort, powerful sound and hard-wearing
design, they’re a great addition to a home cinema setup. They are
particularly good if you’re going to skip between games, movies and
music.

If music appreciation is all you’re about, though, you
might also want to consider something like the AKG Q701. They’re not as
beefy sounding, but the more delicate, open sound comes across as more
accurate and a bit less ear-candy-sweet. And these days they’re significantly cheaper, too.

Incredibly comfortable headphones that are the perfect late-night accompaniment to a home cinema system.