What are the Sony MDR-XB80BS?

The Sony MDR-XB80BS are wireless sports earphones, currently available for around £85 – a rather more attractive price than the original £110.

Tech-wise they’re spot on, and the fit is perfect for runners or for use in the gym. With the “XB” in the name denoting extra bass, I’m pleased to say that they live up to that claim. However, these aren’t the best-sounding wireless earphones at the price.

Think carefully about buying these unless being gym-ready is your top priority. 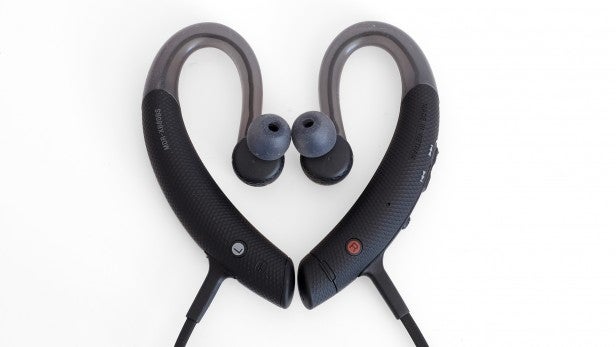 Making audio gear exercise-ready isn’t easy. You have to think about cables getting in the way, sweat destroying the electronics, and movement of parts as you run.

The Sony MDR-XB80BS have an unmistakably sporty design, because taken out of that context, they don’t look all that hot. Sony has taken the classic ‘hearing aid’ shape, jazzing it up with some typically moody Sony styling.

The earpieces and the lobe that sits behind your ear are made of a solid, lightly rubberised plastic; it features a diamond-embossed pattern. In between those bits is a flexible rubbery arm that loops over your ear. 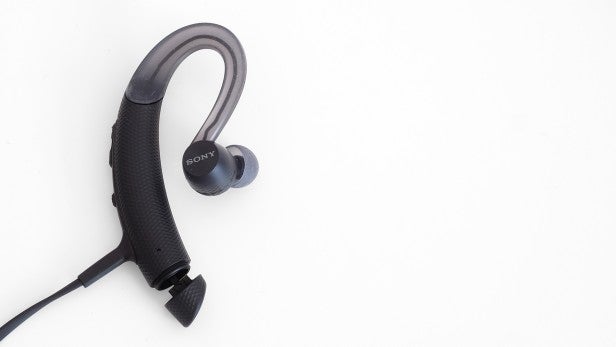 There’s a cable that joins the two earpieces, but this design results in everything of significant weight anchored in place by your ear. When you first put on the Sony MDR-XB80BSs, they feel odd and bulky – particularly if you wear glasses. However, they sit firmly in place.

These earphones also offer better water-resistance than most. IPX4 is the standard for a good sport earphone, but the Sony MDR-XB80BS offers IPX5. IPX4 means a gadget can handle water splashes; IPX5 can handle water jets. So a bit of sweat isn’t likely to be an issue here.

The two bits that make this possible are the rubbery bung at the end of the right earpiece, beneath which you’ll find the Micro USB charging socket, and the seam-free design of the buttons. A series of little raised controls in the rubber of the right earpiece let you take calls, play/pause music, change volume and switch tracks. 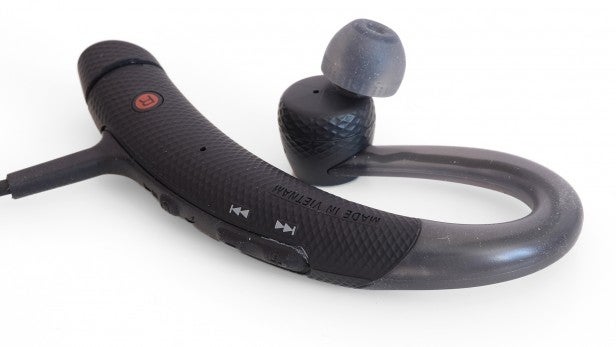 There are just three buttons, so some long-press features are required. I also find the buttons a tad fiddly. It’s a consequence of the design: the buttons need to be a little stiff to avoid accidental presses, but since the back part sort of floats behind your ear, you need to press the stem into your head or support it while pressing.

I’d suggest not worrying about this too much. You get used to it – and short of putting a single button on the back of the bud itself, there isn’t much else that Sony could have done. I’d rather these buttons than having to stroke up and down the back of the earphone. 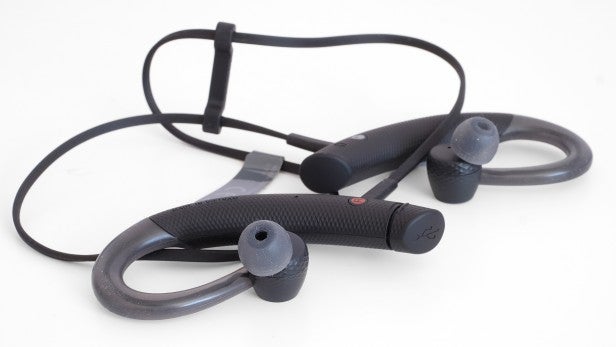 Typical of Sony, the MDR-XB80BS have wireless features more advanced than many rivals offer at the price. They have NFC, letting you pair a phone just by waving it over your ear, aptX support and LDAC.

You may not have heard of LDAC before. It’s a Sony wireless format that transmits three times the data of normal Bluetooth (SBC), maxing out the possible bandwidth. However, you need an LDAC-compatible phone to use it, such as the Sony Xperia X or Xperia Z5.

If you use another brand of phone then the earphones will transmit using aptX or trusty old SBC, the standard Bluetooth audio format. 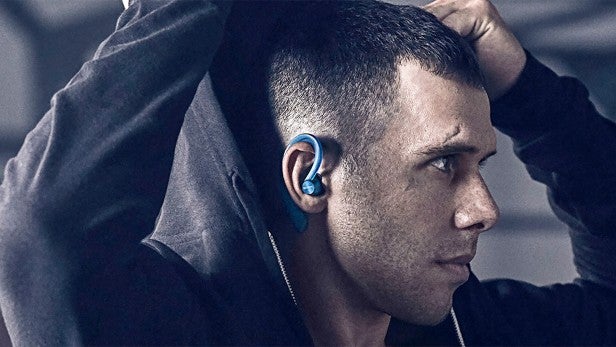 Stamina-wise, the earphones are far more ordinary. The Sony MDR-XB80BS last 7 hours 30 minutes between charges, which isn’t that impressive when the much smaller Beyerdynamic Byron BT last longer – with, seemingly, less space in which to fit a battery. The Sony’s battery life will easily be long enough for a week’s worth of exercise use for most people, however.

The Sony MDR-XB80BS also come with a little fabric bag, which you can sling in a large pocket or a rucksack. 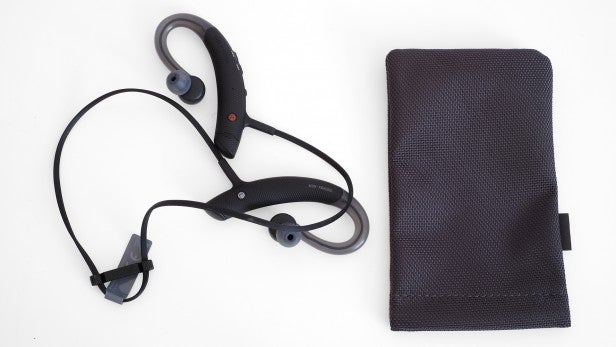 I’ve found the Sony MDR-XB80BS’s design a bit of slow burner. First, I wasn’t a huge fan of the fit, but using them alongside a bunch of other sporty headphones, it actually works better than most.

I still find it hard to get excited by the Sony MDR-XB80BS’s sound, though. It isn’t bad; it will do the job of making treadmill runs less boring. But it’s also quite ordinary, in a manner that makes it hard to see what Sony was aiming for. Aside from adding the extra bass this series of headphones always promises anyway. 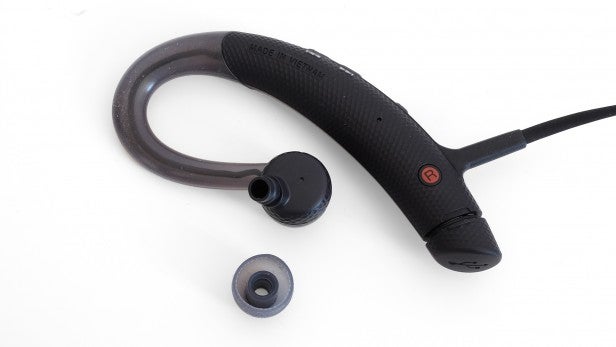 There’s an bonus chunk of bass that makes the bottom-end sound a bit bigger than that of the SoundMagic E10BT and the Beyerdynamic Byron BT. It sits in what I like to think of as ‘normal’ bass; not the sort of sub-bass that comes into play in dance bass drops and other electronic music.

Such a bass boost can work well in a sports earphone that’s either going to have to compete with a decent amount of ambient noise, or at least the kinetic distraction of your footfalls. However, it’s powerful sub-bass that I find the most exhilarating, and here it’s simply okay.

The Sony MDR-XB80BS sound seems oddly modular, where great earphones do their best to make sound appear a coherent whole, a single image – rather than a collection of bits. For example, there seems to be a secondary focus on the upper mids. This helps vocals stand out well against the bass boost, but it’s a little coarse rather than smooth, leaving the sound with a finish that’s less pleasing than rivals, including the SoundMagic E10BT.

There’s nothing ear-serrating here, and the Xtra Bass isn’t so aggressive that it ends up ruining the sound. But the Sony MDR-XB80BS’s audio doesn’t hang together as well as I’d like in an earphone pushing £100. 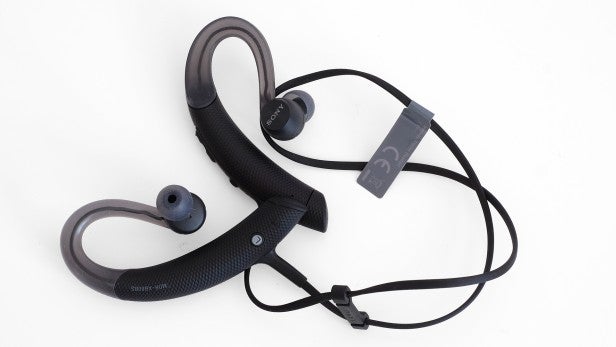 Should I buy the Sony MDR-XB80BS?

If you’re buying the Sony MDR-XB80BS purely for sports, then the secure fit and water-resistance make them a decent buy. Not everyone will love the feel of these earphones to start with, but I’d reassure that it’s odd rather and uncomfortable; you’ll get used to them.

The sound is less worthy of praise, however. Much as I think the bass lift works well in an earphones such as this, I’m disappointed by the MDR-XB80BS’s ‘bitty’ tonal make-up, which in certain parts sounds a little basic.

They do compete with ambient noise well, but if you’re looking for an everyday pair that will also do the job for the gym, I’d suggest looking at the SoundMagic E10BT, or a reasonably secure on-ear set such as the Urbanista Seattle.

Sporty to the core, but you can get more refined sound at the price.