What are the Sony MDR-XB450BV?

The Sony MDR-XB450BV are £70 headphones out to blast your eardrums into oblivion with seriously powerful bass. But they are not just ordinary headphones, hardware-wise.

They can function as a normal pair with a bit of a bass emphasis but nothing too out of the ordinary. Plug in a couple of AAA batteries and flick a switch, though, and the Sony MDR-XB450BV bass resonance chamber kicks in, givingh you the sort of bass weight you just can’t get with ordinary headphones.

There’s a certain thrill to the experience in some conditions, but unfortunately the low-fi nature of that bass boost means it’s not really worth the extra money you pay over the ordinary Sony MDR-XB450 version. 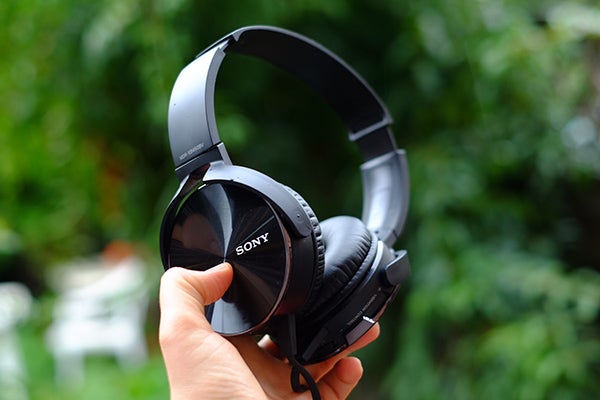 The Sony MDR-XB450BV are large headphones, but they are not the over-the-ears kind you normally get with pairs of this size. Instead, they are actually just very, very large on-ear headphones.

Sony has classed-up the look of the XB range since the models of a couple of years ago, but thanks to their sheer size, the Sony MDR-XB450BV are still pretty eye-catching. The back plate of each ear cup has a metallic finish of concentric circles widely used in Sony’s current headphones.

It’s a pretty good-looking design trait, with a slightly classier, more inclusive look than the more overtly styled Beats headphones. Still, they do stick out from your head a way – something we like to see makers avoid in on-ear portable headphones like these. This pair also appears to be slightly bulkier than the normal Sony MDR-XB450, the cheaper version without the bass resonance feature – because it doesn’t need to fit in the extra hardware, or batteries. 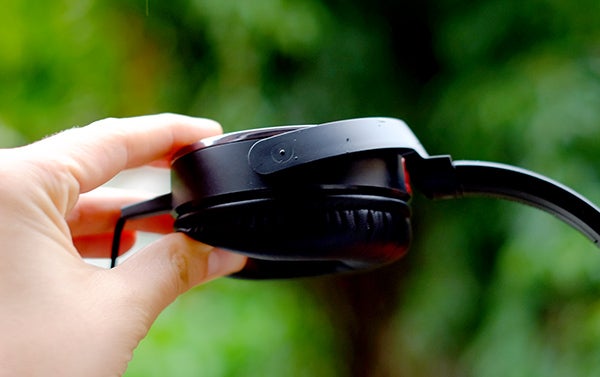 They do still feel like £40 headphones rather than £70 ones, though. They’re all-plastic (although there’s nothing really wrong with that) and there’s no padding on the headband. We think the look is sharp, but the build is nothing to get too excited about at the price.

A lack of headband padding is not a big problem, though, as the fairly firm headband tension means much of the Sony MDR-XB450BV weight is supported by the pads, not the headband. This has been the approach of previous larger XB-series headphones, and while it means they don’t have the obvious ‘soft touch’ comfort of the Bose AE2, it does work well in a number of respects. 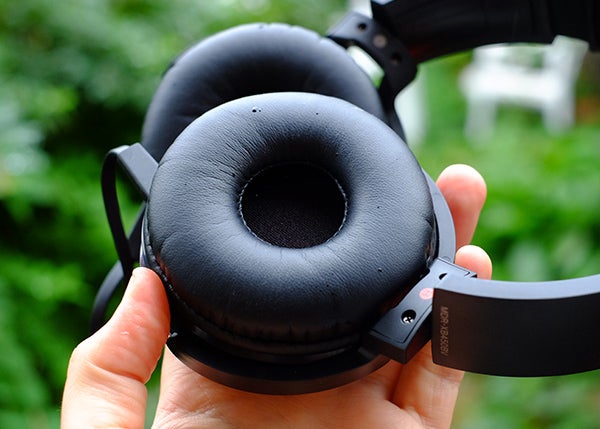 The Sony MDR-XB450BV pads are big and soft, with soft synthetic leather that’s several leagues above what we saw recently in the ultra-budget Sony MDR-ZX310 in our recent best headphones under £20 test. While there’s a definite pressure on your ears, this keeps the headphones in place fairly firmly while the padding is thick and soft enough to be comfortable to wear for several hours.

There’s a little too much motion for running with them on, but slower joggers will be able to get away with it.

The padding style also affords the Sony MDR-XB450BV very good noise isolation for an on-ears pair. We took the headphones out on the underground, and they coped pretty well. We’d ideally like to see a bit of the rubbery padding used  used in the headband like the Beats Solo 2, but let’s not forget – these are really £40-45 in design (the price of the ordinary XB450), not £70 ones.

There are obvious a few hardware bits that separate these ‘bass resonance’ Sony MDR-XB450BV headphones from the basic Sony MDR-XB450 model, though. The cap on the end of the left ear cup can be twisted off to reveal where the two AAA batteries live. These are not included, which seems pretty stingy when you’re paying an extra £25 for this extra feature. 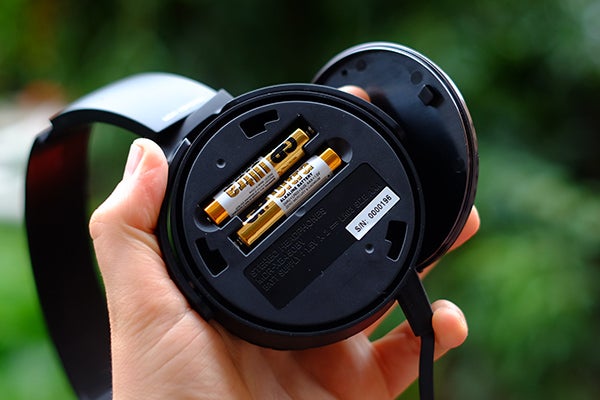 You control the bass resonance on the other earcup, where there’s an on/off switch and an effect slider, which controls whether it’ll just jiggle your cochlea or turn it into dust.

In terms of other features, the Sony MDR-XB450BV are pretty weak. There’s no remote or handsfree housing, the 1.8m cable is non-removable and these headphones don’t fold up for extra portability. The cable also plugs into both ear cups, where single-sided cables are generally a bit more convenient. 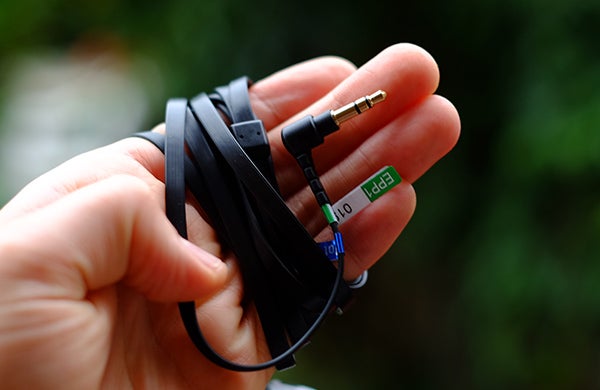 Before looking at what the bass-booster feature is like, we’re going to deal with what the Sony MDR-XB450BV sound like normally, because it’s probably how these headphones will be used a good deal of the time.

The good news is that unlike some other XB-series Sony headphones, the bass is not a real trampling, dominating force. There’s a nice bass kick, but it’s fairly well-handled. It’s not hugely boomy.

The Sony MDR-XB450BV are very much ‘top and bottom’ headphones, though. They are out to trick your ears they offer everything by offering bass punch and a bit of treble zing, without supply a great deal in-between. The mid-range is flat, recessed and offers limited detail. It’s a particular problem with male vocals, which are often pushed into the background – even when they’re meant to dominate the central stereo channel. 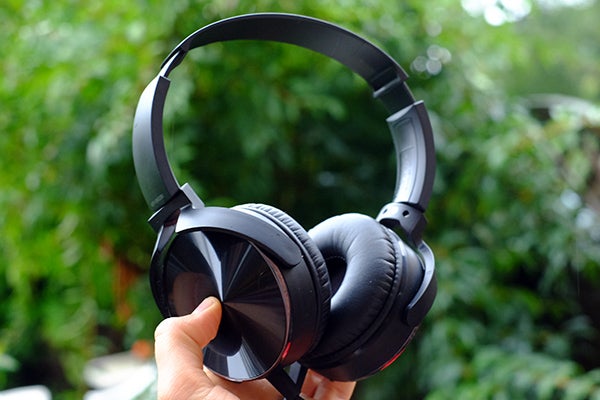 As there is a decent treble presence here, the Sony MDR-XB450BV don’t sound foggy or veiled, but the pickier ear will be able to clearly hear how little mid-range texturing there is here. One set in the same class that manages to same sort of easy-going warmth and clarity the Sony MDR-XB450 are after is the Griffin WoodTones (better sound, less sturdy build).

Up top, the Sony MDR-XB450BV offer reasonable treble detail, although you can get better at the price for detailing, smoothness and fidelity. Again we come up to the issue that the Sony MDR-XB450BV are really £45 core headphones with an extra feature that bumps them up to £70 – th next league in headphone terms.

The soundstage width and dynamic range are nothing to get too excited about either. In summary – they’re not ‘hifi’ headphones but offer a pleasant listen with some extra bass, but not a ridiculous amount.

Switch the Sony MDR-XB450BV’s bass booster on and the sound changes quite markedly. The treble remains largely the same, but everything below takes on a completely different character.

The upper and lower bass registers get much thicker. The bass resonance feature seems to work in a similar fashion to the bass radiators used in smaller speakers – to increase bass power without needing more speaker ‘cabinet’ space.

We’ve encountered the same sort of hardware in the Skullcandy Crusher, which now sell at around the same price. 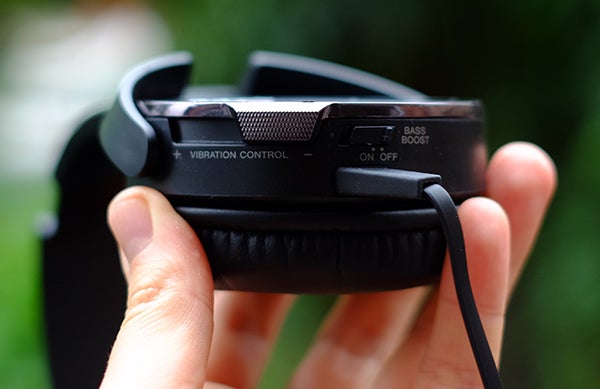 Turn the bass dial up to max and you get the sort of low-end thump you can really feel on your ears, like standing next to a speaker bass bin at a gig. The bass ‘driver’ is not a normal speaker driver, and clearly moves back and forth with a lot more aggression than the Sony MDR-XB450BV’s normal speaker.

However, sound quality-wise it’s a bust. It introduces the sort of bass fug we were so glad not to hear in the normal mode. It’s thick, and clogs the sound. And while it also adds some weight to the mid-range, it’s marshmallow-y, not the sort of toned mids we’re after.

Conscious that the real aim of the Sony MDR-XB450BV bass booster is to offer a subwoofer-like experience, we tried the headphones with some games and movies – where subwoofer bass really matters. However, the effect just doesn’t have the control and finesse to be remotely useful in our opinion. Its effects aren’t limited to the lowest registers, and the way it blows bass up is very lo-fi. It’s very one-note, bordering on atonal at times. 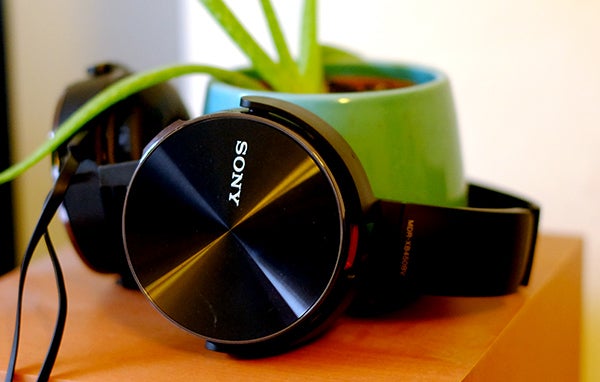 Should I buy the Sony MDR-XB450BV?

The Sony MDR-XB450BV are portable headphones out to provide bone-shaking bass. They do this with a special bit of hardware not seen in 99 per cent of headphones.

At the top bass boost level, they provide the kind of low-end you can truly feel. However, the actual sonic quality of this bass is poor. And it doesn’t really have the control to provide the sort of impact we’re after, whether in movies, games or music.

Without the bass feature engaged the Sony MDR-XB450BV’s sound quality is reasonable, but you can get this set minus the extra bass gimmick for just £40-45: significantly less.

Reasonable comfort, decent isolation and a hint of Sony style mean the cheaper model is worth investigating for some of you. However, we still think the Sony MDR-V55 may be the better set for the bass heads out there – as long as you can handle their slightly creaky build.

The Sony MDR-XB450BV offer larger-than-life bass, but its lower-than-average quality means the extra you pay just isn’t worth it.

Next, check out our best headphones round-up