If you care about your ears, one of the best ways to keep them in shape is to avoid thrashing them with loud noise 24/7. Ever get annoyed by that person on the train blaring bad music through bad headphones? They’re going their ears no favours, as well being an annoyance. Noise cancelling and sound isolation are the best ways to avoid having to crank up the volume, and the Sony MDR-NC100D earphones use the more involved cancellation type.

Design
Noise cancellation actively monitors ambient noise using microphones, extracting it from the sound that reaches your ears by altering the waveform the earphones pump out. We could explain it further, but that would require graphs, and this isn’t a science lesson. 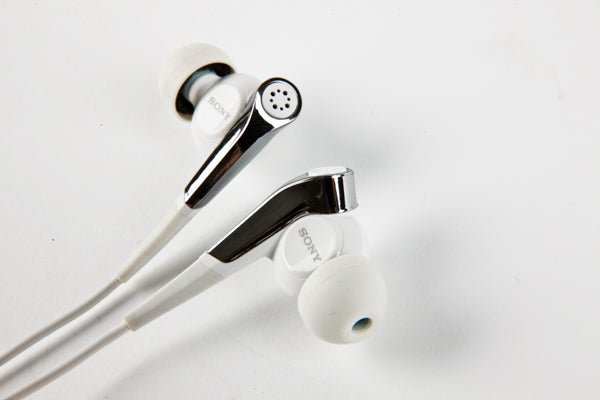 What you do need to know, though, is that ANC (active noise cancellation) requires extra internal components and power. In a pair of over-ears headphones like the Bose QuietComfort 15, these parts can fit into the earcup, with the aid of clever engineering. But in the Sony MDR-NC100D, there just isn’t the room.

The ANC Box
Instead, these earphones just a special housing that sits around half-way down the cable. Some similar pairs choose to bring this box much closer to your ears, but the extra length you’re granted here means you can clip it to a trouser pocket or shirt pocket easily enough. As long as you’re not 7.5ft tall. 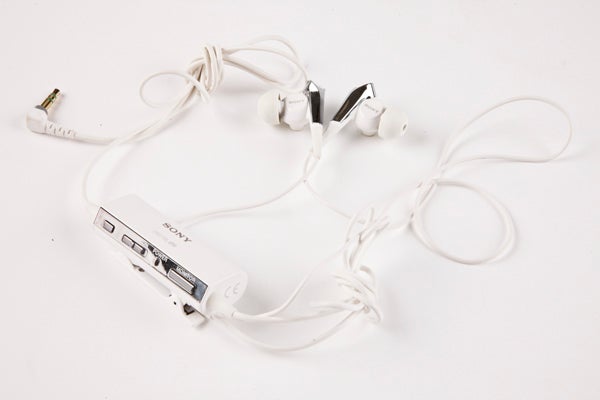 There’s a plastic belt clip on the back of the box for this purpose. It’s not enough to stop the housing from becoming a bit of a pain though. Needing to fit in an AAA battery, it’s chunky and too heavy to leave dangling from your ears comfortably. If you’re used to plain old earphones you’ll probably find it quite a nuisance.

The housing doesn’t double-up as a remote control either. There’s no control over music playback or volume, but there are some controls on its bod. The mysterious AI NC button recalibrates the Sony MDR-NC100D’s noise cancellation – although it seemed to do just fine without it during testing – and the Monitor button plays the sound of the outside world through your headphones instead of eliminating it. 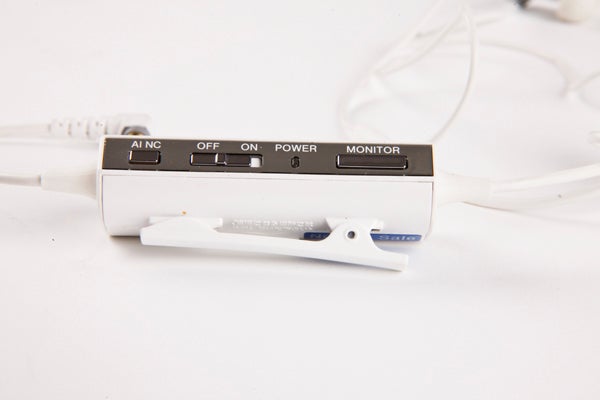 In-between, there’s a power switch. There’s no auto power off here, but battery life is reasonably good. Sony claims 22 hours from a single AA battery, and if anything it seemed as though we got even longer out of our Panasonic Infinium rechargeable.

The Earphones
The Sony MDR-NC100D earphones themselves look reasonably similar to other models in the MDR range though, with the addition of little grilles on the back of each earpiece. Behind these is where the ANC microphones live.

With the battery box happily clipped to clothing, these are comfortable earphones. Although largely plastic, there’s a little nubbin of rubber on the part that rests against the cartilage in your ear, reducing the chance of them falling out, and offering a softer part to make contact with your ear. Unlike the battery box, they’re not at all heavy, either. 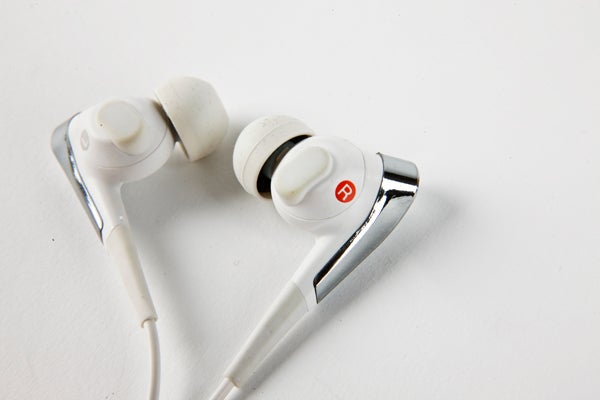 Three pairs of rubber tips are included in the box, and feature foam inner buffeting to further help them get a seal in your ears. An airplane adapter and leather effect carry case are thrown in too.

So far? A mixed bag. The ANC housing is a not-unexpected pain in the rear, but the earphones themselves are perfectly comfortable. But how do they actually perform?

It’s a way off the performance offered by the genuinely vacuum-like Bose models, but in practice these earphones do the job well. They take all the bulk out of the sound of engine noise, noisy air conditioning systems and other low-end noise, turning roaring cars into ineffectual-sounding Jetsons-like whooshes. 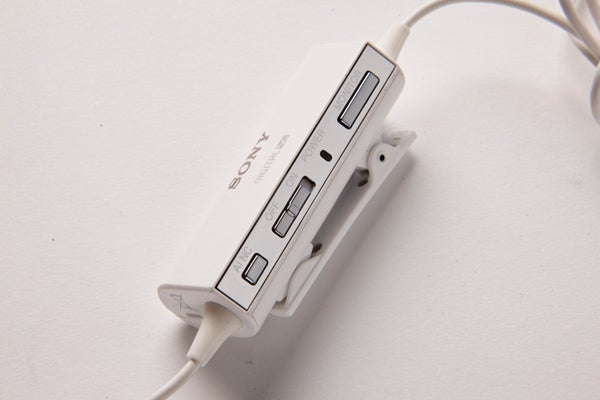 The Sony MDR-NC100D don’t zap outside noise entirely – higher-frequency noise such as nearby conversations of people with less-than gruff voices will still be audible – but they do stop you having to crank up the volume when on public transport. Or, perhaps, a plane.

In the trade-off, some noise is introduced. There’s a light upper-mid range hiss, which you will still notice in quiet sections or spoken word recordings. However, most ANC models suffer from this to some extent. The only models that produce a lot less noise are, you guessed it, Bose. However, Bose’s ANC headphones are so aggressive that it can feel as though they’re in danger of sucking out your eardums – ANC increases inner-ear pressure, which can feel a bit… weird. The more laid-back approach used here avoids such odd sensations.

Sound Quality
We’re yet to come across a pair of noise cancelling earphones that we can recommend without warning that you can get better sound quality at the price by going down the simpler isolation route. The Sony MDR-NC100D are no different. However, they’re by no means bad. 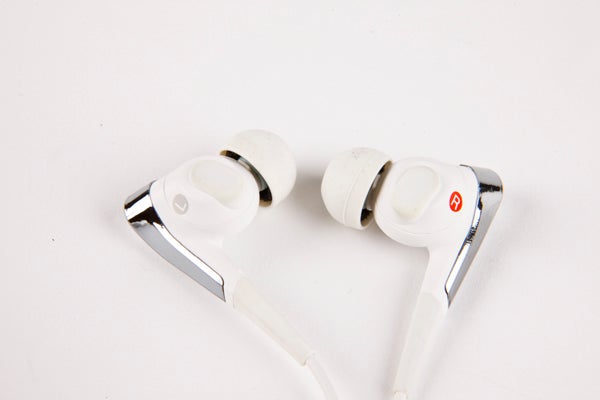 As usual, there’s a marked sonic difference depending on whether noise cancellation is turned off or not. When turned off, the balance is pretty good, with lean bass and even presentation. However, the treble lacks fidelity, leading to a slightly brittle sound.

It’s a good job, then, that turning ANC on whacks ups the warmth and bass presence, providing a much more lush-sounding, forgiving listen that maintains a good level of detail. And the extra mid-range presence helps smooth-over any previously-heard cracks in the top-end. Technically speaking, the MDR-NC100D’s sound here is overly bassy, and it does lead to congestion at times, but overall it’s warm and easy-going, and there’s significantly greater separation and detail than the cheaper Digital Silence DS101. Challenging? No. Enjoyable? Yes. 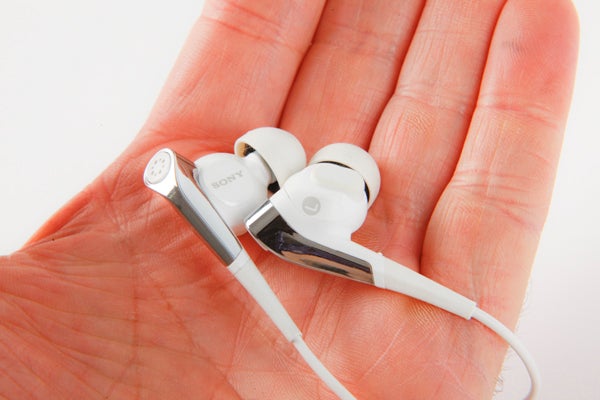 In either state, these aren’t quite audio enthusiast-grade £80 earphones. They’re comfortably outperformed in the pure audio stakes by the SoundMagic E30, which are half the price. But, crucially, those earphones don’t offer noise cancellation.

For frequent fliers, we can understand the allure of ANC. It works much more efficiently than pure rubber tip-based isolation in removing low-frequency noise. However, make sure you really need it. That said, they feel far less out of their depth than some noise cancelling headphones, competing reasonably well with mid-rank standard earphones at the £50 mark.

Verdict
With decent noise cancelling and decent sound quality, the Sony MDR-NC100D earphones are some of the better ANC pairs you’ll find, especially now they’re available for around £80. The battery box is a pain and you’ll naturally find better sound from a non-cancelling set at the same price, but they offer the necessary step-up in fidelity from entry-level earphones.