The HW700s are wireless headphones from Sony which, remarkably, claim to deliver a 9.1-channel surround sound effect without all the speakers. These aren’t really the kind of headphones you would pair with your smartphone on a morning commute, then, but the kind you’d use at home to enjoy films in ‘surround sound’ without waking up the wife, the kids, the neighbours, the dog and generally making yourself deeply unpopular. 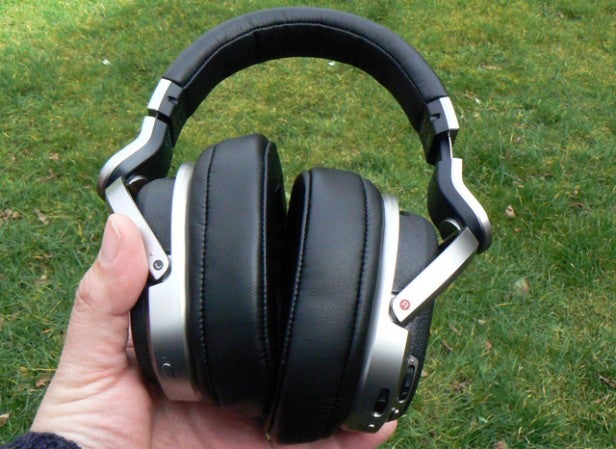 It’s obvious as soon as you look at the HW700s that they’ve been designed with comfort in mind. There’s a nice chunky ‘wrap’ of cushioned leather running the full length of the head band, while the plush leather padding for the ear cans is well over an inch thick.

Focussing on comfort makes sense, of course, given the HW700’s home cinema focus, for you’ll likely be wearing them for a couple of hours at a time. Or much longer if you’re a massive Titanic fan…

The build quality for the can fittings and backs is attractive enough from a distance – especially the textured finish to the closed can rears. But it looks perhaps a touch plasticky if you look closely – albeit very robust, thick plastic! 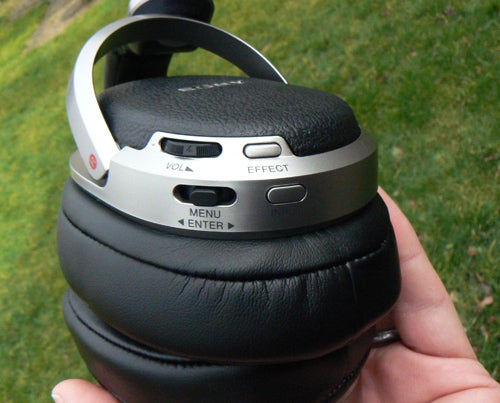 On the left ear can is the main Power On button, as well as a USB port for attaching to a USB charging device such as a laptop (the headphones are fully rechargeable, as you would expect these days).

On the bottom edge of the right can, meanwhile, is a quartet of further control buttons. One is a simple volume control wheel, but the others point to the full extent of the HW700’s sophistication/ambition. First there’s a menu button, which calls up an onscreen menu if you’re using the HDMI loopthrough feature of the HW700’s external transmission unit (more on this soon).

Plus there’s an input button – also connected to the functionality of the transmission unit – and an effect button for toggling through a trio of sound processing options.

The transmission unit is vastly more sophisticated than the usual transmission units you get with wireless headphones. Its main point of difference is the presence on its rear of not only an HDMI loopthrough system but a multi-input HDMI loopthrough system. In other words, as well as being able to strip out the digital multichannel audio from an HDMI source the transmitter box can be used as an HDMI switchbox for up to three sources.

Even more startlingly, it can be used as a 4K switchbox! We were at first pretty incredulous at the appearance of Sony’s 4K logo on the HW700’s box, wondering what the hell this ultra high-resolution video platform might have to do with a set of headphones. But feed a 4K source into one of the HDMIs on the HW700 transmitter unit and a 4K source emerges from its output. This is pretty impressive considering that the dedicated HDMI switchbox business is still struggling to handle 4K signal switching.

The HW700’s transmission box also carries an optical digital audio throughput and a stereo audio line input if you don’t want to go the HDMI loopthrough route (though bear in mind if you have that you won’t be able to enjoy the full 7.1 and even 9.1-channel audio potential the headphones claim to deliver), while its front shows you by illuminating different parts of its fascia what input and what sound format you’re using.

This information text is pretty small, though, which makes it pretty hard to read from a typical TV viewing distance if, as we suspect, you’ve got the transmitter sat somewhere near your TV kit rack. This is where the onscreen menus come in. If you’re using the HDMI loopthrough capability pressing the menu button on the headphones calls up a simple but effective onscreen interface providing such information as what options you currently have selected (number of audio channels, audio format etc) and the remaining battery power in the headsets, while also allowing to you to fine tune such things as centre channel level, low-frequency level, audio delay (if you’re experiencing lip-synch problems), and whether you want the TV audio to play as well as the headphone audio.

In terms of the audio formats the HW700s support, as well as the usual DTS and Dolby Digital multi-channel options (including the HD incarnations) you’d expect of any surround sound equipment, there’s also the key 7.1- and 9.1-channel LPCM support.

Plus, of course, the HW700s can be used as standard music headphones, with the high-end cans forming part of Sony’s new High-Res Audio drive, meaning they’re capable of parsing – and, hopefully, doing justice to – high-res audio formats like FLAC and DSD. If that interests you then read our review of the High-Res Audio Sony NWZ-F886 MP3 player.

The frequency response range of the HW700s is suitably extreme at any rate, apparently taking in everything from 5Hz-25000kHz.

One final rather neat little feature of the HW700s is the way they automatically turn themselves off to save battery if they detect you’ve taken them off – and then turn back on when they detect you’re wearing them again. 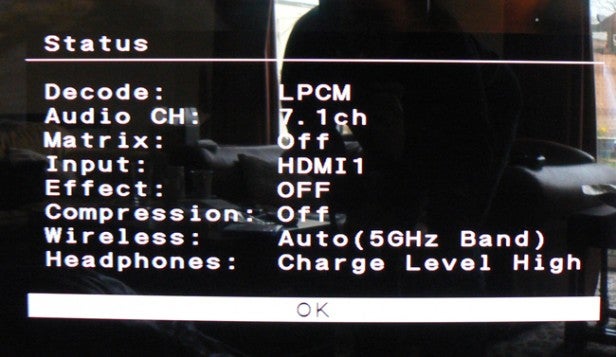 The HW700 is more difficult to set up than most wireless headphones because of the need to wire your HDMI sources through it if you want to maximise its capabilities. Though the pay off in terms of having access to HDMI switching and the HW700’s onscreen menus is considerable.

Without using the HDMIs, set up is hindered by the small readouts on the transmission unit and having to control the system by ‘blindly’ using the buttons on the headphones themselves – especially as the headset turns off if you attempt to remove them for easier access to the buttons.