The Sony MDR-EX750BT h.ear in Wireless are wireless earphones costing £130. The design incorporates a neckband, which will be a good fit for runners, gym fans, or commuters who don’t want to worry about cables.

Flawless wireless performance makes them a joy to use day-to-day. However, with sound quality that can only keep up with much cheaper wired headphones, the Sony MDR-EX750BT will be a less-than-perfect fit for those after audio perfection as well as practicality. 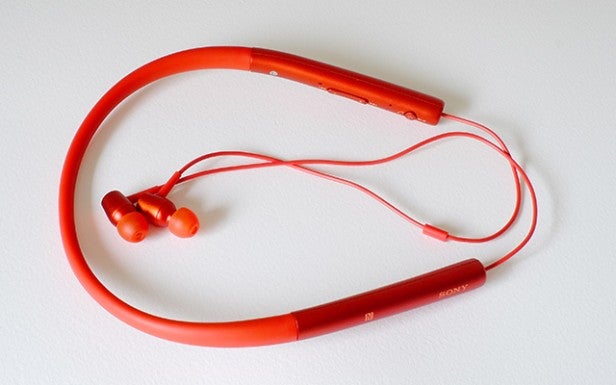 Many headphones of this style try to make their neckbands look inconspicuous. The Sony MDR-EX750BT don’t.

With colourful plastic stems designed to look like anodised aluminium, they’re almost jewellery-like. The Sony MDR-EX750BT are available in a variety of colours, including a pinky-red, orange, lime green and turquoise – as well as black if you’re after something less showy.

I’m not a huge fan – they’re not exactly elegant. However, Sony has provided plenty of decent lifestyle shots of these headphones, so you can make up your own mind. 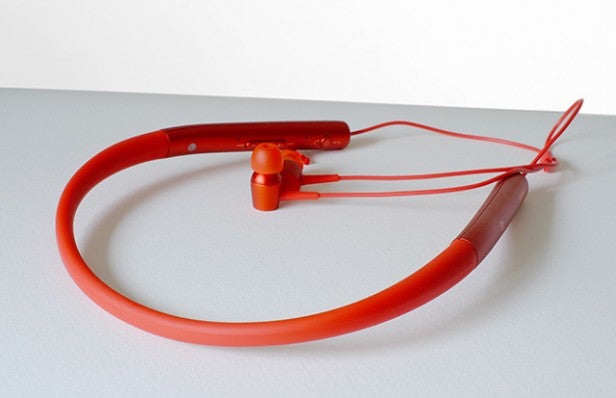 The rear-most part of the Sony MDR-EX750BT’s neckband is flexible, but three-quarters of it is actually quite stiff. Next to the rival Audio-Technica ATH-ANC40BT, these are more showy, tending to stick up from your neck far more.

The MDR-EX750BT’s are comfortable, though. A wider band means they don’t hug your neck, and the front-loaded weighting keeps them in place as you run.

While they’re made mostly of rubber and plastic, the rear parts of each earpiece are aluminium. It’s just there for the feel, a veneer, since the front parts of the earpieces are plastic. It adds a touch of class, nonetheless. 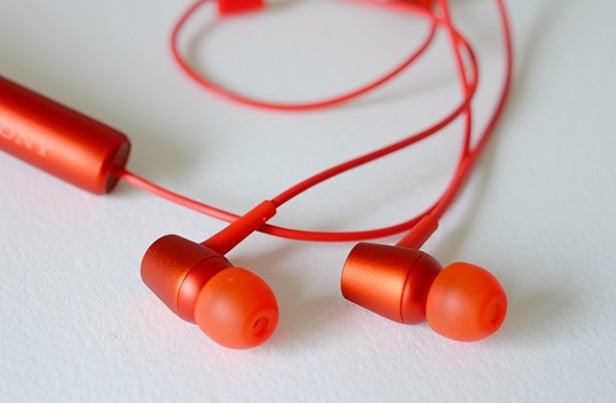 The Sony MDR-EX750BT are Bluetooth wireless headphones, and such will allow you to take calls. However, they lack active noise cancellation to tackle ambient noise.

As a result, they’re less commute-ready than the Audio-Technica ATH-ANC40BT, which feature QuietPoint cancellation.

In keeping with the rest of the MDR-EX750BT’s look, the controls on the earphones are on the inside, out of sight. A rocker lets you alter volume and change tracks, while a quick tap on the power button enables the play/pause functions and enables you to take calls. 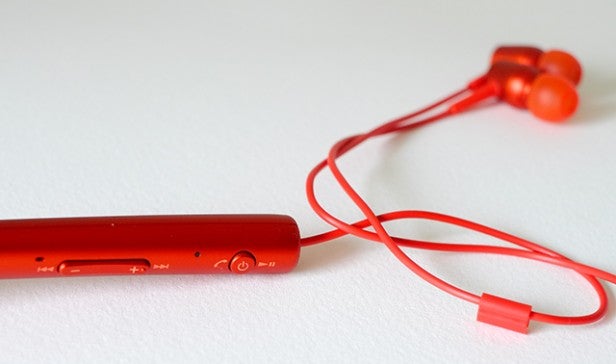 The Sony MDR-EX750BT benefit from having NFC; there’s a chip on the right stem. Just put an NFC phone up to this spot and the two will attempt to pair.

According to Sony, you’ll get up to 7.5 hours of use between charges, but slightly less if you max out the volume. This is relatively standard as far as stamina is concerned. A little flap on the underside of one of the stems hides the micro-USB charge socket. 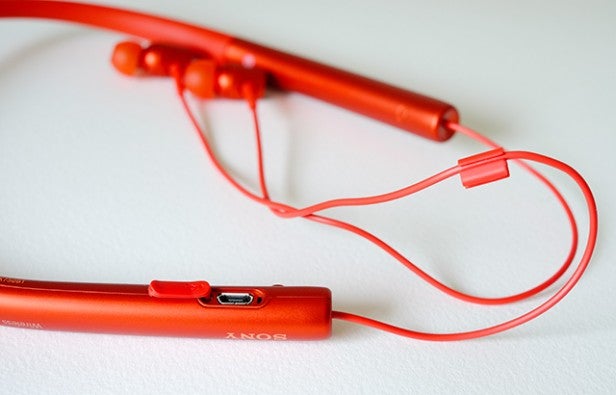 The huge sound quality claim of the Sony MDR-EX750BT is that they support LDAC. This is why you might see these called hi-res earphones, not generally a term that applies to Bluetooth sets.

Sony says LDAC streams at three times the usual rate of Bluetooth. However, you’ll achieve that with only limited sources – namely the latest Sony Xperia phones and the more expensive Walkman players. 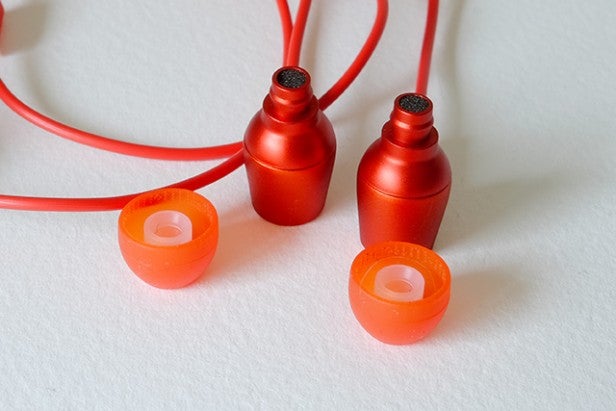 The MDR-EX750BT sound is designed to compete with a decent amount of ambient noise rather than for pure audio quality. A thicker, more bassy sound can benefit earphones such as this; a leaner, more balanced one can end up sounding thin when made to deal with road noise, for example.

These earphones have similar-sounding 9mm dynamic drivers to the MDR-EX750, but since they don’t feature active noise cancellation, the resulting character of the sounds is a little different.

These earphones have bonus bass and mid-bass, which thickens out the lower third of the soundstage. It’s more robust, but the separation of the bass isn’t great.

This becomes fairly apparent when your listening is active rather than a coincidental accompaniment to a run or the morning commute. 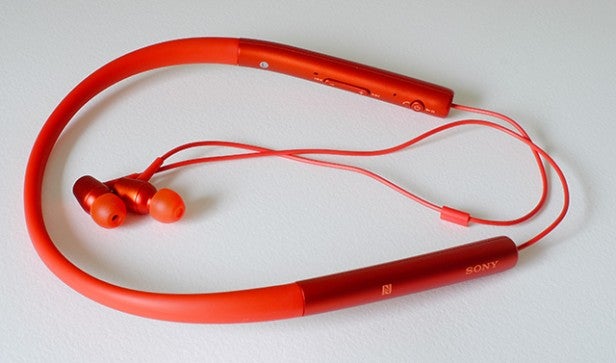 In context the sound works, but ultimately, it struggles to compete with the best sub-£60 standard earphones. I find the SoundMagic E50 more satisfying, for example. The bass on the Sony earphones is a little boomy and flabby, and as such low-register instruments such as bass guitars tend to tread on the subtleties of a mix.

It’s an undisciplined sound, and the tone of the mids isn’t entirely natural, which is essential if you’re to make vocals appear “real”.

The Sony MDR-EX750BT don’t appear to have as high-end a sound as you might expect in a £130 earphone. However, they are easy to listen to; they’re not harsh even at high volumes. The sound is chunky and bass-heavy, but not murky or particularly veiled. 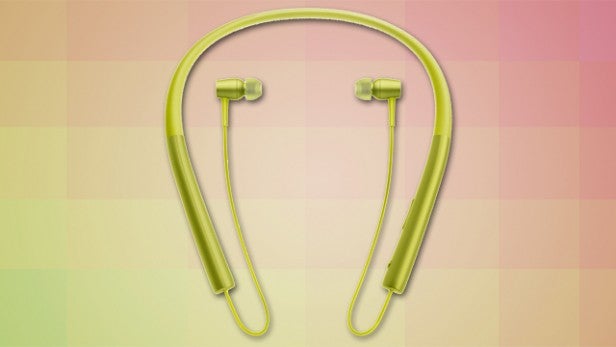 The Sony MDR-EX750BT h.ear in Wireless aren’t subtle earphones. Their looks will certainly turn heads, and their sound will easily be able to cope with less-than-perfect conditions.

They’ll be fine for sports use, especially as a result of their excellent wireless performance. However, if you’re expecting jaw-dropping sound at the price then you may be disappointed. The Audio-Technica ATH-ANC40BT have a high-fidelity sound and active noise cancellation for just a little more money, but their sound isn’t perfect either.

Eye-catching wireless headphones whose sound doesn’t leave quite as strong an impression as the look.