What are the Sony MDR-1A?

The Sony MDR-1A are the updated version of the MDR-1R we reviewed a couple of years ago. They’re over-ear, full-size headphones with more than a hint of sophisticated Sony design.

While claims they’re made for Hi-Res Audio are potentially misleading – these are fun, rather than totally accurate, headphones – they offer top-notch comfort and highly enjoyable sound. And given they’re available for a similar price as the Beats Solo 2 at £160-170, they’re good value too.

However, if you don’t care too much the Sony style or the super-soft fit, the Audio-Technica ATH-50X still trump them in some respects for less money. 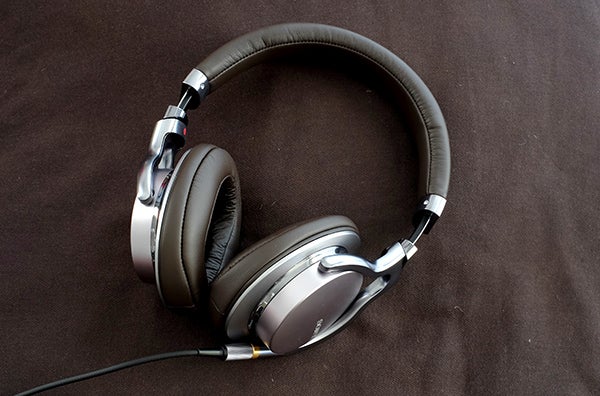 Sony produces bucketfuls of headphones, and the Sony MDR-1A are among the most stylish. Full-size headphones can often come across as too large, comically so in some cases, but the relatively slimline profile of this pair and its very deliberate styling mean it pulls off its design.

They are also age-agnostic. Style headphones often skew towards a younger crowd, but the Sony MDR-1A are low-key enough to avoid such associations, especially in their silver and brown version, which we’re looking at here.

While the outer design hasn’t changed much in the two years since we reviewed the Sony MDR-1R, there was no reason for it to. For those after a slightly more aggressive look, the black version with red trim is stylistically a bit closer to the look you get with sets like the Beats Studio. 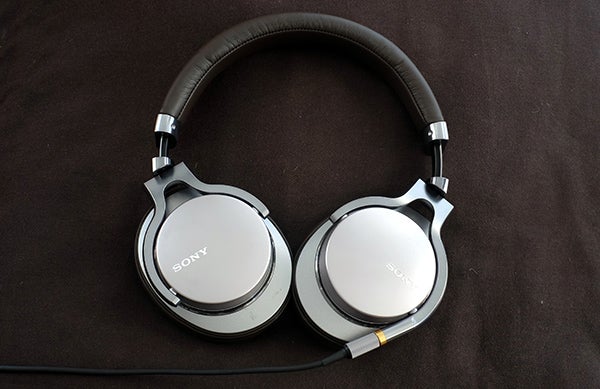 The sophisticated look has a lot to do with convincing you the Sony MDR-1A are high-end too, because the materials used are largely concerned with keeping the headset light. The outer parts of the cups are covered with cast aluminium, as the parts you’re likely to touch most often, but the rest of the set’s seemingly metallic outer parts are plastic.

In our review set there was a tiny bit of creakiness when stretching and twisting the arms, but our pair had already been put through the wringer by a previous wearer. You don’t get the all-out luxury feel of, say, the Bowers & Wilkins P7 here, but it only becomes apparent when you get your hands involved — they are certainly eye-pleasers. 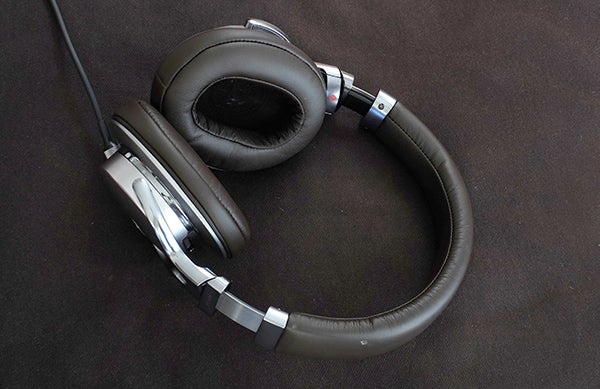 The light construction also helps make the Sony MDR-1A among the very most comfortable headphones in this class: they are extremely comfortable.

Very soft protein (ie synthetic) leather pads large enough to encompass most ears and a fairly low-tension headband make the Sony MDR-1A fit quite sumptuous. These are headphones you can wear for an 8-hour stretch without feeling any discomfort. In the trade-off, they are not perfect for exercise.

While they should stay in place for joggers, we just don’t think the
headband has quite enough tension to keep them in place during vigorous
exercise. 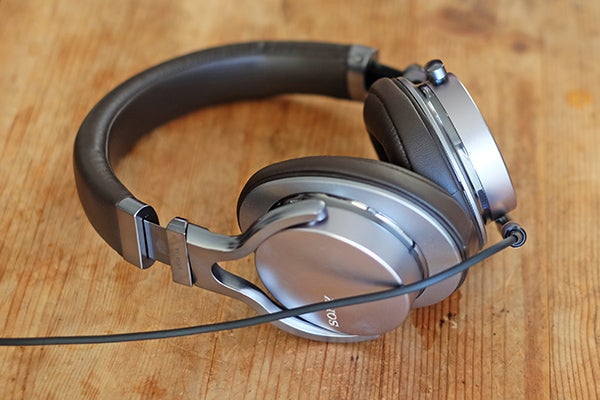 The Sony MDR-1A are not the most portable set in their class, though. While the ear cups swivel by 90 degrees to make the headphones ‘flat’, the cups do not fold inward (into the headband) to save space. There’s also no case supplied.

The cable is removable, however. It snakes out of the left ear cup and uses a common 3.5mm jack rather than something proprietary. The bundled cable is the classic 1.2m portable length, and doesn’t offer any kind of remote or handsfree housing. 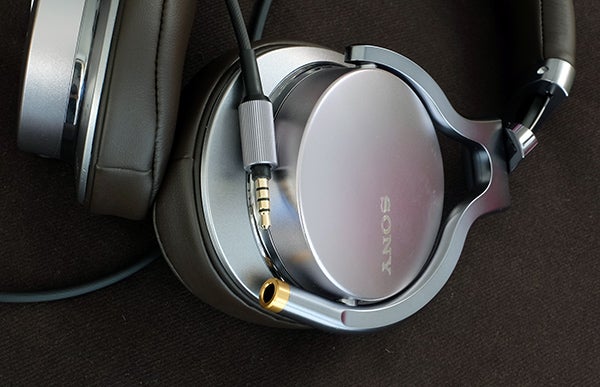 These are pure, plain headphones – no wireless, no noise cancelling, no extras. However, there are some more advanced, and expensive, models in the series too. The MDR-1ADAC have an inbuilt DAC to let you get the digital feed from a computer or USB audio-enabled phone (like an iPhone 6), and the MDR-1ABT offer Bluetooth.

No flashy features here, then, but the Sony MDR-1A cable is pretty thick – more so than smaller portable headphones. Sony also says the lead is balanced, giving each channel its own ‘sub’ cable and ground cable. 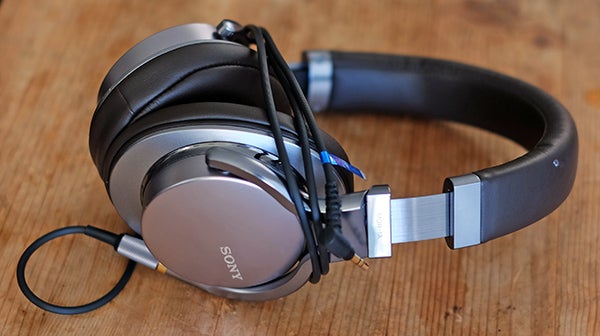 Sony talks pretty confidently about the MDR-1A sound, positioning it as a good complement for Hi-Res Audio – digital audio rendered at a quality higher than that provided by good old CDs.

The Sony MDR-1A are headphones that marry an overemphasised bass with otherwise refined sound. There is some resonance to the bottom-end that stops it from sounding entirely balanced. It is quite obviously ‘larger’ than intended, especially when doling out dance beats. 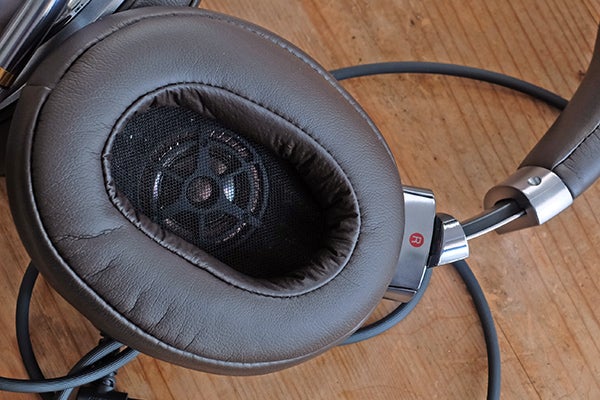 This kind of bass emphasis is of course the norm among style headphones, but is a sign that the ‘Hi-Res’ tag is there for the most part because these are supposedly ‘high-end’ headphones and that Hi-Res Audio is the current buzzword in hi-fi. The Audio-Technica ATH-M50x offer greater bass control and a ‘higher-resolution’ sound for slightly less money, for example.

However, Sony has clearly made some improvements in the two years since the old MDR-1R.

Two years ago we complained of too-easy-going treble, but the MDR-1A provide detailed but smooth treble that offers plenty of higher-frequency information while sticking within a harshness-fee signature. Once again, though, if you like your treble with a bit of bite the Audio-Technica ATH-M50X offer more of it, as well as somewhat superior treble detail.

Are we trying to point you towards the ATH-M50X instead of this pair? To an extent, yes. They offer a slightly higher-fidelity sound at a lower price.

The Sony MDR-1A have one important win, though. They offer a wide and expansive soundstage that is not only involving and, well, big-sounding, it also helps to stop the chunky bass from sounding like it’s drowning everything else.

The tone of the mid-range is great too. They are pretty-sounding headphones that are able to make voices – both the spoken and sung king – sound natural.

As long as you’re not after lean, accurate bass we think most people will sink into the Sony MDR-1A very happily. In balancing a warm, fairly easy sound with a nice mid-range tone and sophisticated-sounding treble, it offers sound that reflects the characteristics of the set’s look and ear-hugging comfort. 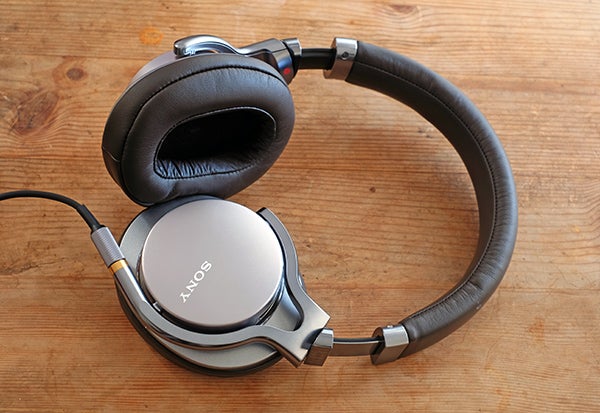 Should I buy the Sony MDR-1A?

The Sony MDR-1A are very enjoyable headphones from a number of perspectives. Good-looking, extremely comfortable and a price that’s a good £100 less than the over-ear competition from names like Beats and Bowers & Wilkins, they are easy to recommend.

If you’re lured-in by the promise of high-resolution sound, we recommend considering the Audio Technica ATH-M50X instead. They offer better bass control and greater treble definition.

The ear candy factor is its own lure, though, and the smooth, expansive-sounding Sony MDR-1A are a great choice if enjoyment is a greater concern than pure accuracy.