The more high dynamic range (HDR) TVs I see, the more I value direct LED lighting. It seems to me that TVs illuminated by lights sitting directly behind the screen consistently handle the more extreme light range associated with HDR better than TVs that place their lights around their edges.

Sony, it seems, agrees with me. Having only offered direct LED lighting TVs on very high-end models in 2016, it’s now adding a completely new XE90 TV series to its 2017 range that’s expressly designed to give savvy TV buyers a direct LED HDR solution they might actually be able to afford.

I got the chance to spend some one-on-one time with a 65XE90 at a product launch event at Sony’s UK headquarters last week, and the results were… interesting. 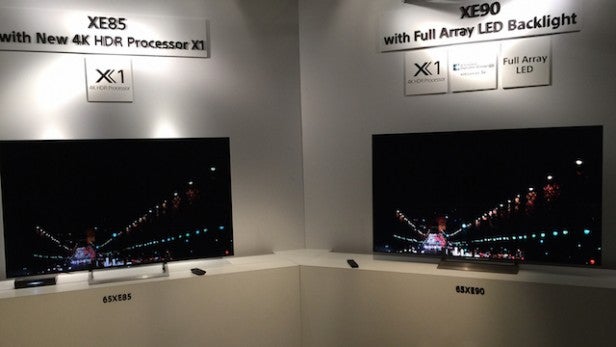 The 65-inch KD-65XE90 (75-inch, 55-inch and even 49-inch options will also be available) was on show in a fairly dark room, running stock Sony 4K HDR demo footage from a hard drive server.

While this footage didn’t include any actual movie sequences, it did include some footage of neon lights against a night sky that provided an unusually extreme test of the screen’s contrast performance. And the first thing that struck me while watching this tricky scene was how much brighter and more intense its neon highlights look compared with the edge-lit XE85 screen sitting alongside the XE90.

The reds, blues and whites of the neon lights exploded off the 65XE90’s screen and stood out against the blackness around them with much more intensity than they did on a new edge-lit XE85 model sitting next to it. This immediately created a more intense and ‘HDR’ effect.

There was more brightness-induced volume to the colours on show too, making them look more natural and dynamic.

Close inspection of some of the more uniformly bright and detailed demo footage available on Sony’s hard drive revealed that the XE90’s higher brightness versus the XE85 isn’t just palpable over relatively small areas of the screen, either. The whole screen can hit a higher overall brightness level than the XE85 too. 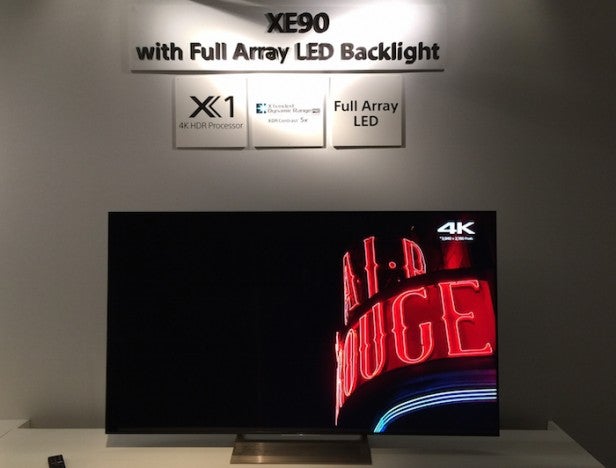 Sony continues to be secretive about the peak brightness of its TVs. It also continues to feel no need to seek the Ultra HD Alliance’s Ultra HD Premium badge that would at least give us some reassurance that it’s hitting a minimum HDR-friendly level of brightness, colour and contrast. However, from this demo there’s no question that the XE90 is capable of delivering a punchy and convincing HDR contrast performance.

Sony’s usually effective Triluminos technology joins the screen’s brightness in delivering a strong sense of the wider colour gamuts associated with the majority of HDR content. The intensity of the colours on show was backed up by impressive tonal subtlety, which even seemed to hold up well in dark parts of the picture – something that’s traditionally difficult for LCD TVs.

The XE90 does not get the ‘Extreme’ version of Sony’s X1 processing chipset found on the ZD9, A1 OLEDs and XE93/XE94 TVs. This means it will not be upgradable for Dolby Vision, and doesn’t sport the Extreme’s Dual Database system for more advanced upscaling and noise reduction. However, the 4K HDR X1 chipset has previously proved itself more than good enough to keep viewers happy – provided Sony gets the XE90’s pricing right.

As well as not talking about the maximum brightness its TVs can achieve, Sony isn’t a fan of discussing how many zones of local dimming its TVs might have. But my suspicion, from both the range positioning of the XE90 and what I saw at the trade show, is that it’s using fewer zones than last year’s XD94 series, and far fewer than the 600-plus zones found on the ZD9. 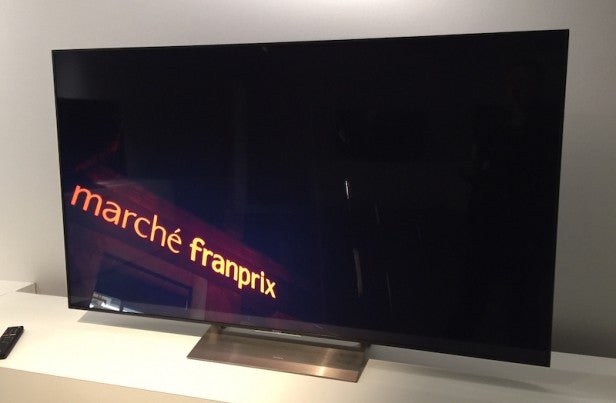 I say this because during the neon-lights-at-night sequence, it really was pretty easy to see a few inches of light blooming around the stand-out bright areas. Especially – though not exclusively – when you’re watching from an angle of 20-30 degrees.

During these scenes, it even seemed as if the XE90 was actually struggling to deliver black levels as deep with extreme content as those visible on the edge-lit XE85 beside it! Though, the highlights of these scenes looked far less bright and dynamic on the XE85 than they did on the XE90.

The extent of the XE90’s blooming is, of course, concerning. However, it’s important to stress that the demo content was very extreme, and that I couldn’t play with the XE90’s settings at the trade show. So, I hold out more than a little hope that the XE90’s blooming might be successfully tamed via careful handling of its backlight and dimming options. That is, once I can get my hands on one in a proper test situation – something I hope to do in mid to late spring.