Having dropped the ball with its key XD85 range in 2016 by building the models around low-contrast IPS panels, Sony looks to be on much firmer ground with 2017’s XE85.

Sony even went as far as illustrating the black-level advantages of this move by running one of last year’s XD85 models alongside a demonstration 65XE85. It was instantly obvious that the 65XE85 is leagues ahead of its IPS rival when it came to black level response and backlight uniformity – both key issues in today’s HDR age. 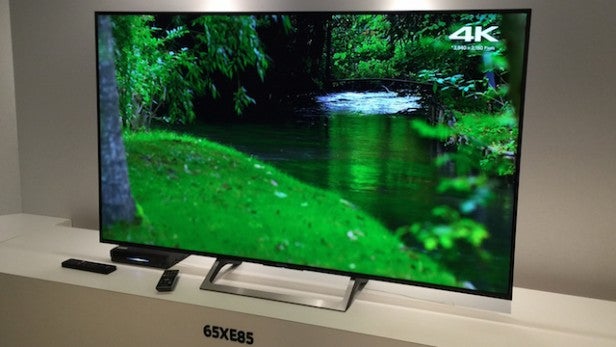 The 65XE85’s handling of dark scenes didn’t just impress against the XD85; its edge lighting also stood up well against the edge-lit LCD TV world in general, in what was a surprisingly dark room.

Sony was bold enough during its demos to use some extreme HDR content, featuring bright neon lighting against a near-pitch-black night sky. Yet even here, the XE85 maintained strikingly deep black levels. Better still, there was pretty much no evidence of backlight clouding, striping or bleeding.

It’s worth stressing that I’m describing HDR pictures here, so the brightest image parts are more intense, and thus more likely to cause backlight flaws than you’d expect with standard dynamic range images.

I was further impressed by how well the 65XE85’s matte screen finish soaked up reflections and ambient light, and also how its black level held up when the TV was viewed from an angle. 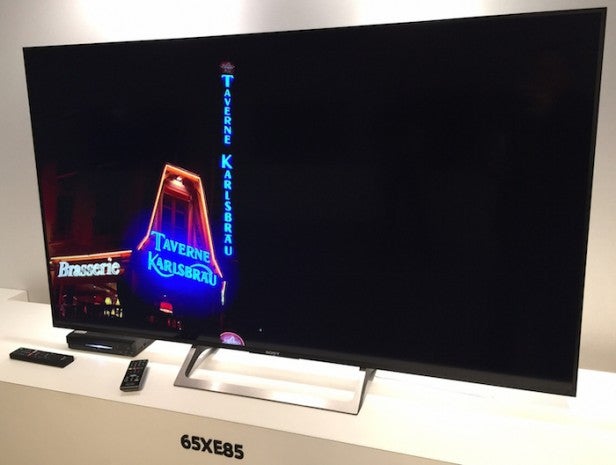 Predictably, given its mid-range status, the XE85 carries one of Sony’s 4K HDR X1 chipsets rather than the brand’s flagship X1 Extreme system. This means it won’t be Dolby Vision capable, and won’t benefit from the extra 4K upscaling and noise-reduction talents of the Extreme chipset.

However, from what I saw in the demos, even the 4K HDR X1 chipset is capable of producing some seriously detailed 4K images. This is alongside degrees of colour subtlety as a result of Sony’s Triluminos colour system, which again outgun what was possible on the XD85’s IPS panel.

Bright scenes look punchy and dynamic on the 65XE85. Sony doesn’t reveal light output figures for its TVs – and it has to be said that the 65XE85 certainly looked second best for brightness beside a direct LED 65XE90. Nevertheless, with bright scenes I never felt as if the 65XE85 wasn’t giving me an HDR experience.

This wasn’t the case with dark HDR scenes. While I was impressed by the depth of the XE85’s black level and backlight uniformity, the bright elements of mostly dark HDR shots undeniably looked far less bold and dynamic than they did on Sony’s new XE90 TVs.

This has to be because the XE85 only applies “frame dimming”, rather than local dimming, to its edge LED lighting system. This means that all of its lights have to be dimmed or brightened together, rather than sections of them being able to output different light levels. 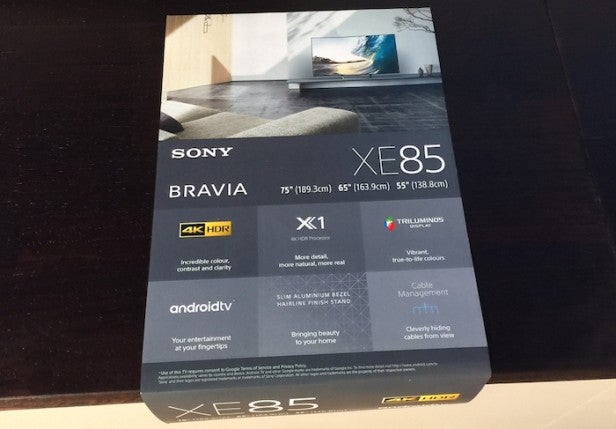 Predictably, it also appeared that the XE85’s frame dimming approach was leading to a degree of subtle detailing being lost in dark areas.

While this could be a deal-breaker for some, it’s important to wrap up this first look by putting the 65XE85 into context. While it might not be the brightest TV in the HDR world, it’s certainly streets ahead of its equivalent Sony predecessor.

It has the potential to deliver deeper and more consistent black levels than most, if not all, of its edge-lit rivals. This makes it much more likely – price willing – to make a splash in the affordable 4K HDR marketplace than any TV we’ve seen from Sony in the past.

We’ll be bringing you a full review as soon as we can get a finished sample.