While all the Ultra HD/4K LCD screens at CES 2013 have
blown us away with their picture quality, none have managed to get us
quite as enthused about the prospect of a 4K future as Sony’s 65in LED
4K model, the KDL-65X9000A.

There are many reasons we say this.
The first, of course, relates to the TV’s picture quality. Sony had a
large number of 65X9000As up and running on its CES stand, showing
native 4k (3,840 x 2,160 resolution) content ranging from coverage of a
football match to nature footage, movies (The Amazing Spiderman), and
digital stills photography (rendered through the now 4K-capable version
of the PS3’s PlayMemories software). And in all cases, the resulting
pictures looked not just stunning, but perhaps slightly more stunning
than they have on the other non-OLED 4k displays in town.

The
main reason we make this call in Sony’s favour is the remarkably
vibrant colours delivered by Sony’s new (to edge LED backlighting, at
any rate) TriLuminos technology, which introduces new RGB filters to the
edge LED system.

Also, of course, there’s the heart-melting fine
detailing in both ‘near’ and ‘far’ objects in scenes, endlessly subtle
colour tones, and stunning texturing associated with 4k screens. Sony
has additionally improved its X-Reality Pro 4K upscaling engine since we
tested the 84X9005, and wasn’t afraid to show off the seriously
impressive results in a special section of its stand.

In fact,
Sony was keen to claim that Blu-rays created using 4k masters can be
upscaled on the 65X9000A with particularly accurate results, thanks to
the processing simply being able to ‘put back in’ the resolution that
had to be removed to get the film onto a Blu-ray.
This claim sounds
hard to swallow, we’ll grant you – but we’ve seen demos that suggest
there is at least an [upscaled? – Ed.] grain of truth in what Sony is
saying. At any rate, Sony feels sufficiently confident about its claim
to have introduced a new ‘Mastered in 4K’ label to go on the boxes of
relevant Blu-ray films. 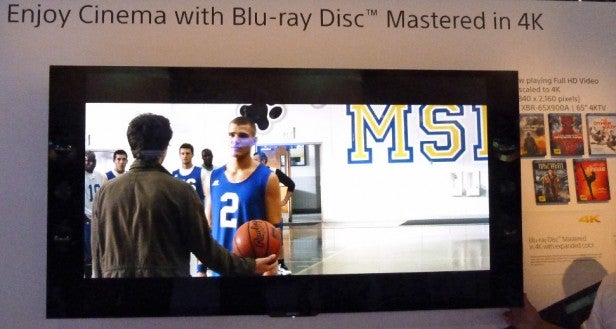 Sony
was also showing the startlingly attractive 4K server box it ships with
the 84X9005 in the US, giving us another reminder – along with Sony’s
promise to deliver 4k downloads as soon as it possibly can – that Sony,
more than any other brand right now, is trying to deliver genuine 4K
content already, rather than in some distant dream future. It’s just a
shame there still aren’t any plans to bring this 4k server/downloader to
the UK.

Rounding out the sense Sony is presenting of just how
imminent a truly 4k world could be, is the extent to which the 65X9000A
feels like a fully finished and extraordinarily well-rounded product. 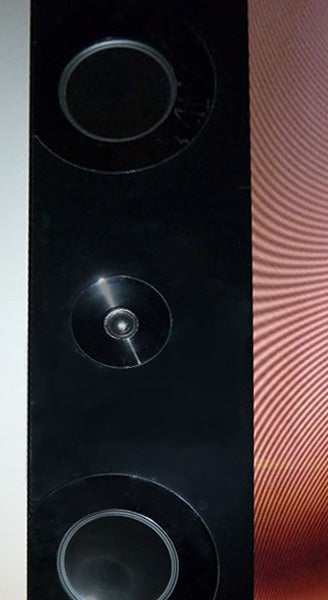 For
starters, it looks a million dollars thanks to the way its luscious
high gloss black finish extends out far enough from the screen’s left
and right edges to incorporate a set of Sony’s extraordinary new
‘magnetic fluid’ speakers. These are designed to deliver levels of
power, clarity and bass without needing the sort of deep rears normal
speakers do.

Run in conjunction with a couple of woofers on the
TV’s rear in a dedicated CES demo room, these magnetic fluid speakers
delivered quite simply the finest sound-quality we’ve ever heard from a
TV. Honestly.

Bass
levels were extreme, the mid-range was stunningly open and expansive,
and treble detailing was reproduced with total, harshness-free
precision. The result is movie soundtracks that sounded like they were
coming out of some decently high-end separates system, and music that
can only be described as genuine hi-fi.

The icing on the cake
comes from swanky-looking – and long overdue – new operating menus and a
redesigned Smart TV engine that now includes extensive ‘SideView’
technology for enhanced communication (including NFC) and content
sharing with external tablets and mobile phones.

In
short, the overall impression we took away from our time with Sony’s
65X9000A was of not just a remarkably well-rounded and high-performance
TV, but also a genuine Sony 4K eco-system that’s much closer to becoming
a reality than we’d previously thought possible.