The Sony 55X9005A’s bigger sibling, the 65X9005A, was actually the very first ‘proper’ (as in, not just 4K to serve glasses-free 3D tech as was the case with last year’s Toshiba 55ZL2) 4K TV we tested. So while we were utterly mesmerised by the picture quality it offered, we didn’t have much of a frame of reference to draw on when trying to understand how its pictures might stand up against rival 4K TVs. Now that we’ve seen 4K TVs from all the main brands, though, we’re in a better position to appreciate just how excellent the picture quality of Sony’s 4K debutantes really is. 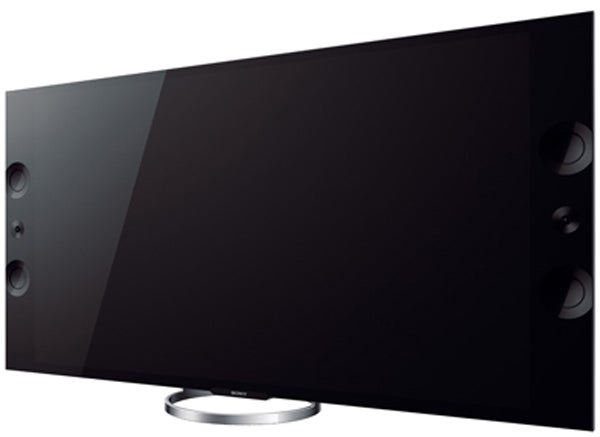 Detail
Starting with native 4K content, the results are truly lovely. Pictures
look clearer and more ‘real’ than HD ones, with zero noise and an
astonishing sense of depth (as the extra resolution enables pictures to
stay crisp and detailed further into the distance) that’s manna from
heaven during views across landscapes and cities.

There’s clearly more detail in pictures too when it comes to seeing individual leaves on trees, blades of grass, writing on newspapers and the like. The impact of this extra detail is a little less spectacular than it is on Sony’s 65-inch X9005A unless you sit closer to the screen than you will probably want to under normal circumstances. But this is not to say that native 4K fails to deliver a noticeable and desirable advantage on the 55X9005A’s 55-inch screen over even the best HD pictures.

Colour
The 55X9005A’s ‘killer app’ with 4K, though, has to be its colour reproduction. As hoped, Triluminos does a sensational job of helping the screen render 4K’s extra colour precision thanks to the extreme range and subtlety of the colour palette the quantum dot system can reproduce. We were able to run the Sony 55X9005A head-to-head against a number of other 4K TVs, and it beat the competition hands down in the colour resolution department.

One or two rival sets – those from Samsung and LG in particular – render native 4K footage with a touch more sharpness, but the precision of Sony’s colour reproduction compensates for this, resulting in a 4K image that looks truly next-gen. With this in mind it’s perhaps pity that the HDMIs on the Sony 55X9005A can’t accept 4K signals at any higher frame rate than 30FPS without compromising their colour subsampling. But from what we’re able to watch so far, at least, Triluminos ensures that the 55X9005A’s colours are a level above anything currently delivered by rival brands.

Upscaling
Shifting to the upscaled pictures that will for now unfortunately be your only content for the Sony 55X9005A, Sony’s processing comes up trumps just as successfully as we’d hoped. HD sources – especially Blu-rays, but broadcasts too – are gently sharpened while also, crucially, having the majority of any noise a source might contain removed before the upscaling takes place. This means there’s no possibility for the upscaling to exaggerate source noise.

There’s some deft work when it comes to adding more subtlety to colour blends too, and edges look crisp rather than over-stressed as they would if Sony was too obsessed with just focussing too much on sharpness with its upscaling work.

Motion looks a touch smeary with upscaled footage at times, as the processing occasionally struggles to keep up fully with the speed of image change. For this reason you can try Sony’s motion processing options with upscaled footage, as this kicks in a processing power boost that can restore at least some of the motion clarity you ideally want with images as pure as native 4K.

If you don’t like the effects of any of the motion processing options, however, don’t be too upset, as the smearing we mentioned is actually very low-level and rare even if you leave Sony’s motion processing deactivated.

Remarkably the 55X9005A even manages to upscale standard definition sources quite well. Sure, the image is much softer and enjoys less subtle colour handling, making it very much something to avoid if you can possibly stick with HD. But noise is again removed from the upscaled pictures astutely, and there remain surprisingly few unwanted processing side effects to upset the show despite the vast number of pixels the set is having to ‘conjure up’ in getting pictures from standard definition levels up to 4K.

Contrast
The only part of the 55X9005A’s picture make up that troubled us initially was its contrast performance. The set uses a passive 3D IPS panel – panels that have consistently struggled to produce strong contrast this year. And sure enough, if you turn off this Sony’s dynamic contrast and local dimming features its black level response isn’t great. Turning on dynamic contrast and local dimming immediately has a dramatically positive effect – yet if you’re not careful with them you can make dark scenes look quite unstable due to excessive brightness shifting and areas of backlight blocking around bright parts of predominantly dark images.

Fortunately, after a little experimentation, we managed to arrive at a combination of contrast settings (detailed in the set up section) that left us feeling more than satisfied. In fact, at this point the 55X9005A’s contrast performance can be considered excellent.

Used as the main TV for the review period
Tested for more than a week
Tested using industry calibrated tools, discs and with real world use
Tested with broadcast content (HD/SD), video streams and demo discs
Previous
Sony KDL-55X9005A Review Next
3D, Sound and Verdict Review