The idea that the picture quality on the 55W955B might actually be even better than that witnessed on Sony’s recent 40W605B and 50W829 sets is truly mouthwatering. And if all this wasn’t already interesting enough, there’s also the new set’s ‘wedge’ design to consider… 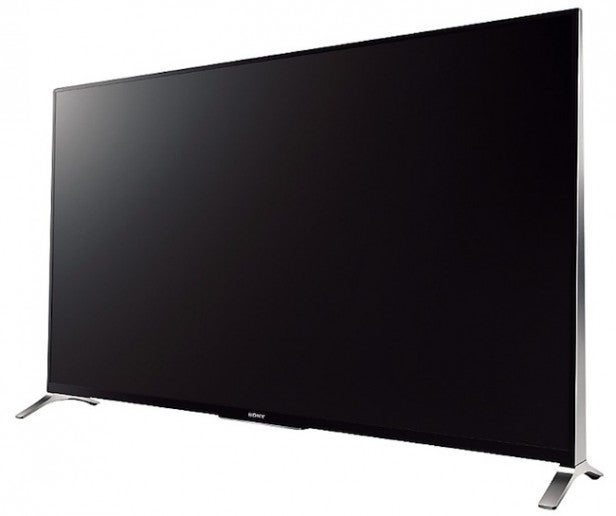 While Samsung’s got curves, Sony’s got the wedge. Most of Sony’s highest-end TVs for 2014 eschew the long-lived fascination with super-slim screens in favour of a design which sees the TV’s rear get progressively wider the further down towards the bottom you go, resulting in a highly distinctive elongated triangular side profile emphasised by a shiny silver side-panel finish.

While this certainly gives the 55W955B a unique style, though, it seems to us that its chunky approach could be at least as divisive as the curve Samsung is applying to its high-end TVs this year. As with the curve, though, Sony claims to have developed the wedge design on the back of hard science rather than a whim.

Such a ducted system worked well on Sony’s W9 HD series last year, so if the Wedge design makes the 55W955B’s sound better still, we’ll be on board with it. One other consideration is that the wedge joins the Samsung curve in creating a somewhat messy-looking situation for people wanting to wall-hang their new TVs – realistically it’s not an option.

Fortunately, while the wedge makes the rear deeper than usual, the frame around the screen is actually impressively narrow – and looks quite tasteful in a minimalist, non-showy kind of way.

The set isn’t quite as robustly built as we’d hoped – but then we won’t worry about this too much given that an ultra flimsy build didn’t stop the 40W605B from kicking picture quality butt.

The TV sits on two little legs that hold the screen no more than a couple of inches up from your stand, and these legs can handily be positioned either at the TV’s extreme edges – which delivers the most stylish finish – or nearer the TV’s centre if you’ve got limited cabinet-top space.

Connections on the 55W955B are up to flagship speed, with highlights of four HDMIs, three USBs, and the necessary built-in Wi-fi and LAN ports for joining the TV to your network for either DLNA streaming from suitable PCs or taking the TV online with Sony’s latest SEN platform. 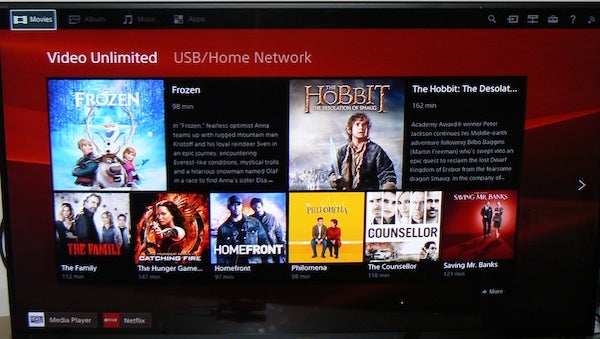 The 55W955B also lets you add one of Sony’s new wireless subwoofers to boost bass response, has a built-in camera for Skyping, and provides NFC (via an included ‘Smart’ remote), screen mirroring and MHL support to cater for all these new-fangled smartphones and tablets everyone’s into these days.

The smart device support extends to some nice features, including a gorgeous ‘app’ for whizzing through lists of recommended content on the upcoming TV schedules. Curiously, though, Sony still doesn’t support second-screen viewing, whereby you could pipe what’s showing on the TV’s tuners to your phone or tablet.

Sony has introduced some considerable improvements to its SEN online service this year, many of which are sensibly focussed on highlighting content you might be interested in and helping you find content you already know you want to watch. There’s a decent quantity of content to be explored too, including Netflix (which gets a dedicated button on the remote), Sony’s own Video Unlimited system, Amazon Instant, the BBC iPlayer and Demand 5 – though it’s a pity Sony still hasn’t managed to sign the necessary paperwork to get the ITV player and 4OD catch up services.

For a much more detailed look at our dedicated feature on the latest Sony smart TV system.

The 55W955B’s picture specifications are intriguing. Particularly the fact that unlike last year’s W9 series – and unlike Sony’s cheaper 2014 W829 series – this flagship model uses passive rather than active 3D technology. The significance of this goes further than just 3D performance, since it means Sony has turned to a different panel manufacturer – LG Display – for the 55W955B than it used for the 50W829.

This is a bit surprising and actually a bit worrying given that when Sony has turned to this panel source in the past – as with last year’s W805 series – the results have not been great.

Doing their best to assuage these concerns, though, are a wealth of high-end picture features. For starters the set carries edge LED local dimming, courtesy of Sony’s Advanced LED Control system. It also gets Sony’s groovily named X-Tended Dynamic Range tech, which uses new light control algorithms to boost the intensity of bright parts of dark images without compromising black levels. Sony claims X-Tended Dynamic Range can deliver double the brightness of sets that don’t have the feature, and we’ve seen some pretty convincing demos of this feature in action over recent months. 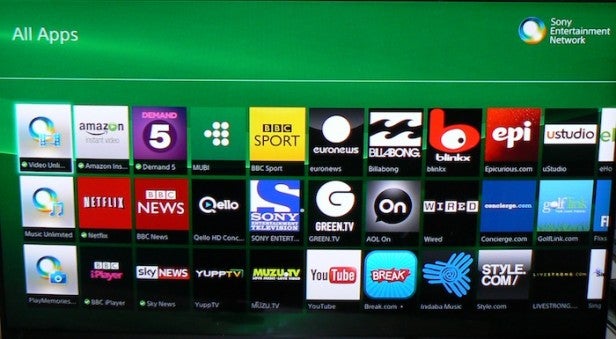 Plus you get the top 2K version of Sony’s X-Reality Pro system, which uses a huge database of content analysis to streamline the video analysis process to deliver cleaner, more effective results with all sources – even low-quality streamed content.

Then there’s Sony’s Triluminos system, which uses wide gamut colour technology (rather than last year’s quantum dot technology, weirdly) to deliver a wider colour spectrum than you get with the normal white LED/colour filter technology. Triluminos delivered some spectacular result on 2013’s Sony TV range, especially when it came to picking out more subtle shading in reds and blues, so hopefully the change in Triluminos technology won’t find colours looking any less brilliant this time round.

The 55W955B holds your hand through its initial set up procedures quite nicely, and its menus are for the most part an improvement in presentation and navigational ease terms over previous generations. The only thing that didn’t sit right with us is the way you can only access the TV’s set up menus via tiny little icons to the top right of the SEN content hub. While we appreciate Sony’s efforts to focus on content with its menus rather than ‘boring’ stuff like picture and sound adjustments, surely it wouldn’t have been too hard to provide a more direct access to the set up tools? Especially as at the moment the SEN and Home buttons on the remote control both pointlessly take you to the same SEN Hub menu.

The 55W955B is in some ways easy to set up for pictures. This is because as noted in our recent review of the 40W605B Sony is uniquely clever these days when it comes to automatically selecting the best picture settings for different types of content. Particularly appreciated is the way Sony is confident enough to turn off many of its picture processing tools when it detects that it’s receiving a high-grade source like a Blu-ray.

The 55W955B doesn’t have a full colour management system of the sort we’d normally expect to find on a high-end TV, but so long as you treat the set’s Live Colour option with care its Triluminos technology helps it deliver a strikingly natural and immensely subtle colour palette without too much intervention from you.

However, without giving too much away about the upcoming picture quality section of this review, the 55W955B has a problem in the black level department. And trying to solve this had us faffing around with tools like Black Level correction, an Advanced Contrast Enhancer, a sliding gamma bar and LED Dynamic Control for what felt like hours trying to get things balanced to our satisfaction.

For the record we found we ended up setting the black corrector to medium, the advanced contrast enhancer to medium, gamma to -1 and the LED Dynamic Control system to Standard – even though this latter setting causes some problems we’ll get into in a moment…