For some reason, every Sony TV we’ve seen from this year’s range to date has used the brand’s second-tier design rather than the eye-catching, sheer-fronted, black-surrounded, gorgeously-built ‘Monolithic’ design the brand introduced to such strong effect last year.

But today we’re putting this accidental oversight right with the 40NX723: a 40in TV that features the latest, narrow-bezelled refinement of the Monolithic design, as well as lots of Sony’s key TV technologies for 2011.

The 40NX723‘s design really is nice. The Monolithic approach is not the showiest look in town by any means, but its understated elegance will likely be right up the street of your average household. What’s more, if you DO fancy upping the screen’s style factor a bit, you can easily do so by purchasing one of the rather cool silver ‘bar’ stand options Sony makes for all of its Monolithic sets. 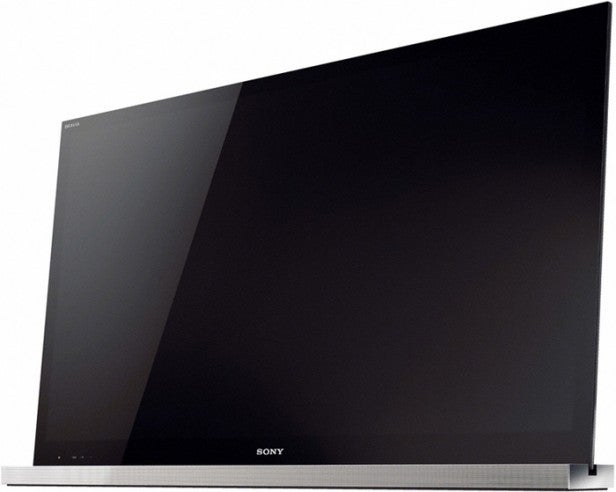 The NX723 range may be Sony’s most affordable Monolithic models, but that doesn’t mean the 40NX723 isn’t very well stocked with features. Its connections, for instance, are pretty much beyond reproach, including as they do four HDMIs (two on the rear, two on the side), a pair of USBs, a D-Sub PC port, and best of all, built-in wi-fi.

The USBs can play Sony’s usual solid if not quite exhaustive mix of video, photo and music file formats, plus they can be used for recording from the 40NX723’s built-in digital tuner to correctly formatted USB hard drives. This digital tuner, incidentally, is a Freeview HD one, as you would expect these days of any TV costing over a grand.

The wi-fi – or a LAN if you prefer – enables you to stream in multimedia files from networked DLNA-capable TVs, or go online with Sony’s excellent Bravia Internet Video (BIV) service. Uniquely focussed on providing video content rather than the piles of mostly pointless ‘apps’ favoured by some other TV brands, BIV remains for us – in content terms, at least – the leading online platform currently available.

Among the reams of services on offer are the BBC iPlayer, the Channel 5 Demand 5 catch up service, Sony’s own library of TV series, LoveFilm, a 3D experience channel, and Sony’s Qriocity film library. It must be said, though, that other brands – most notably Samsung and LG – are now fast closing the video content gap, so although Sony also now offers Twitter, Facebook and Skype support, it will almost certainly need to up its online game for 2012 if it wants to stay ahead of the chasing pack.

We should also explain why we qualified our earlier admiration for BIV with the phrase ‘in content terms at least’. For Sony is most definitely off the pace being set by its Korean TV rivals in terms of the interface used to access all the online content. Things have improved a little from last year, but the system remains pretty fiddly and will struggle to cope if/when Sony adds lots more content to its online offering in the months and years to come.

Actually, the entire onscreen menu system driving the 40NX723 needs a wholesale revamp, as it’s unwieldy in its structure and over-cluttered in its presentation.

If you can be bothered to find them, the 40NX723 carries a quite extensive suite of picture adjustment tools. Examples are a black corrector system; an advanced contrast enhancer; a ‘Clear White’ tool; separate detail and edge enhancement facilities; various settings for Sony’s MotionFlow system for improving motion resolution and reducing judder; Sony’s Live Colour engine; and separate ‘standard’, MPEG and dot noise reduction systems. 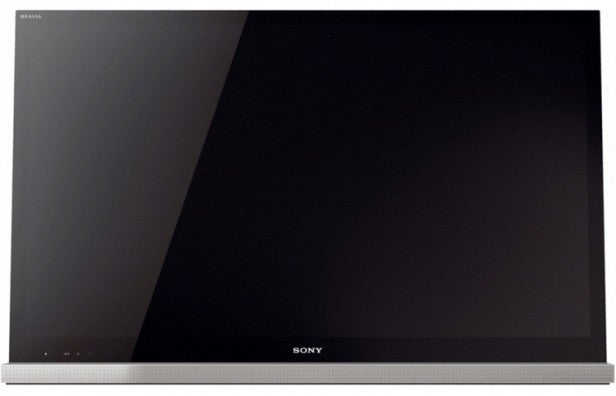 Ironically, though, for the most part you’ll probably want to leave the majority of these tools alone – particularly if you’re watching HD. For as always with processing systems, they each carry the potential to introduce unwanted side as well as beneficial main effects. The Motionflow system, in particular, has a truly horrible effect on 3D Blu-ray pictures, as if it’s not nearly powerful enough to handle the amount of data coming into the screen.

The good news is that you don’t really need to use any of the 40NX723’s processing tools to enjoy very satisfying 2D picture quality from this Monolithic set. It’s obvious right away, for instance, that its black level response is unusually good for an edge LED TV, managing to deliver a deeper, less grey-tinged black colour than usual, while also retaining in dark scenes an impressive amount of shadow detail.

It’s also pleasing to see how little the 40NX723 suffers with our pet edge LED hate of inconsistent backlighting. Provided you’re sensible with its settings – leaving the backlight no higher than its ‘five’ setting for most 2D viewing – dark scenes look mostly even, aside from a slight little ‘arrow’ of extra light in the bottom right corner that’s hardly ever noticeable enough to be distracting. 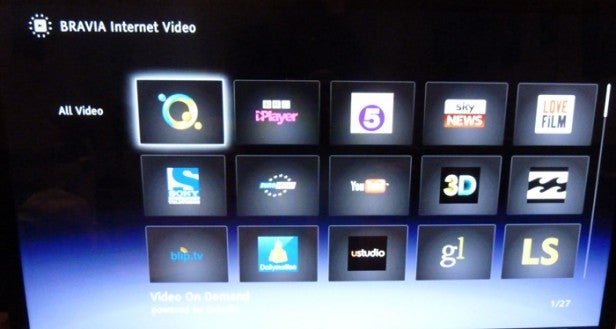 HD pictures look crisp and pretty much devoid of noise (so long as you avoid the provided sharpness and edge enhancement systems), and the sense of sharpness only breaks down a little when a picture has lots of motion to handle. So long as the TV has warmed up a bit, at least.

There’s a touch of judder with the MotionFlow circuitry completely deactivated, but it’s minor and even looks quite natural with films. And anyway, if you don’t like it, you can reduce its impact by setting the MotionFlow system to its ‘Clear’ mode without introducing serious unwanted side effects.

If you’re a gamer, meanwhile, you’ll probably feel very encouraged by the 34ms of input lag we measured on the 40NX723, as this shouldn’t be enough to seriously affect anyone’s gaming performance. 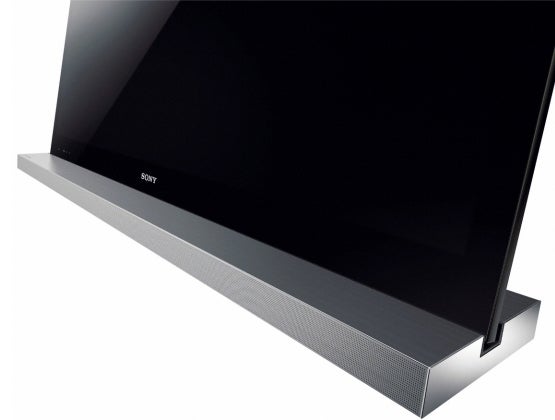 While there’s much to admire in the 40NX723’s 2D pictures, though, its 3D images – once we’d donned a pair of Sony’s very heavy and sadly only optional extra active shutter glasses – are markedly less appealing. Why? That old active 3D chestnut of crosstalk. For while bright scenes don’t suffer too badly with the telltale double ghosting noise, dark pictures are routinely badly affected. So much so that sometimes supposedly detailed dark backgrounds look like they’re out of focus.

Couple this with more flicker than we usually experience with active 3D, and you’re got a 3D experience that’s really quite tiring to watch for more than half an hour at a time.

Oddly we have seen reviews of the same Sony TV posted elsewhere on the Internet that suggest it doesn’t suffer with crosstalk much at all. But barring performance differences between individual samples of the same TV (unlikely), we can only imagine that these more positive reviews haven’t watched much dark 3D content on the 40NX723.

Other more minor general 2D and 3D picture concerns are a slight lack of brightness to calibrated images that make the TV not the best option for a bright room, and finally we spotted a curious little vertical ‘seam’ of either darkness or brightness (depending on the image content) at the screen’s left and right edges. 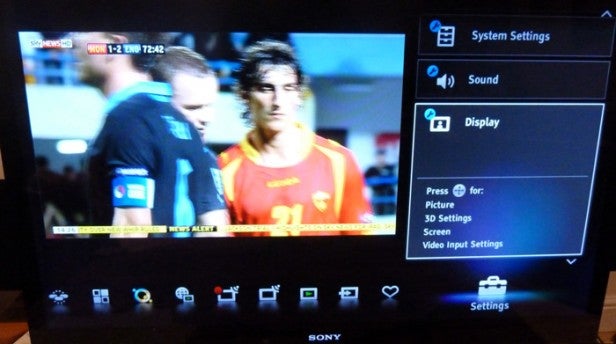 We don’t know why this ‘seaming’ happens, and to be fair it’s only visible when you’re watching something with a large expanse of mostly monotone colour. Also, because it’s right at the edges of the screen, you don’t really feel its presence too heavily. But nonetheless, the bottom line is that such seams shouldn’t be there at all.

The 40NX723’s audio performance allows us to finish on a more positive note. For while there’s a little shrillness at the treble end of the spectrum and a fairly limited bass response, the mid-range is open and powerful enough to sound clearer and bolder than average, even when watching action films.

Verdict
Sony’s 40NX723 sure looks the part with its Monolithic design, and its 2D pictures are very good by edge LED standards. It’s well featured too, with its online functionality deserving special credit.
If you’re seriously interested in 3D, though, the 40NX723 is a deeply flawed proposition. Not exactly what you want to be hearing about a 40in TV that costs comfortably north of £1,000.