Sony’s 2011 TV range hasn’t exactly got off to
the best of starts. For a couple of weeks ago we were startled by the extremely
disappointing 3D performance of the brand’s 2011 debut set, the 32EX723.

Hopefully time will prove this set to be just an
anomaly rather than something that’s going to be symptomatic of Sony’s 3D range
as a whole. But while we await Sony’s higher-end 3D TVs with interest, in the
meantime we’ve got something potentially much ‘safer’ to tide us over: Sony’s
KDL-40CX523.

This is Sony’s entry-level 40in TV, and as such
doesn’t have any 3D capabilities. But as we’ll discover, it’s certainly not the
totally stripped down model you might expect of a 40in TV we’ve found selling
for just £619. 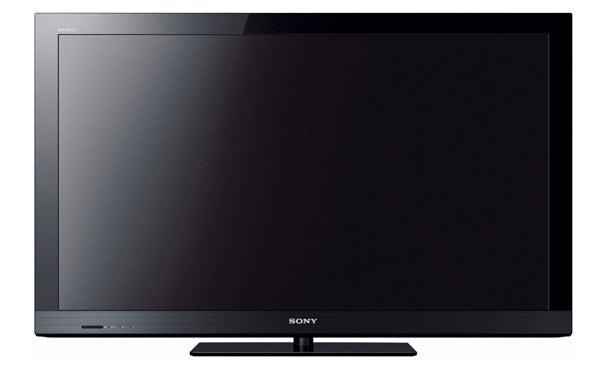 Sony has clearly had to compromise its aesthetic
standards to hit the 40CX523’s price point, though. For while its fascia isn’t
entirely ugly, the chunky size of its bezel is striking after the amount of
narrow-framed models we’ve seen recently, and the extent to which its rear end
protrudes is almost shocking. The build quality is disappointingly flimsy as
well – just a mountain of lightweight plastic.


The unusual size of the rear end initially makes
it look like there aren’t that many connections on the 40CX523 either. But
closer examination reveals a decent set of jacks, headlined by four v1.3 HDMIs
(rather than the three we might have expected for this point in the market),
two USB 2.0 inputs, a component video input, a D-Sub PC input, and even an
Ethernet port.

This latter jack is particularly interesting
because it turns out that it’s not just there to provide mandatory support for
the set’s built-in Freeview HD tuner. It also supports playback of video, music
and photo files stored on a networked DLNA computer, and lets you jack in to
Sony’s Bravia Internet Video (BIV) service. We’re not talking about a stripped
down BIV, either: you can access exactly the same welter of video streaming
services noted when reviewing the mid-range 32EX723. Furthermore, add an
optional USB wi-fi dongle and you can even enjoy these services wirelessly.

The highlights of BIV network are the BBC
iPlayer, the Demand 5 Channel 5 catch up service, a Sky News headlines video
service, YouTube, LoveFilm, and The World of Sony, which provides access to all
sorts of Sony archive material, including music videos, film trailers and, best
of all, full episodes from some of Sony’s TV series, including Rescue Me and -
YES! – the first season of Diff’rent Strokes. 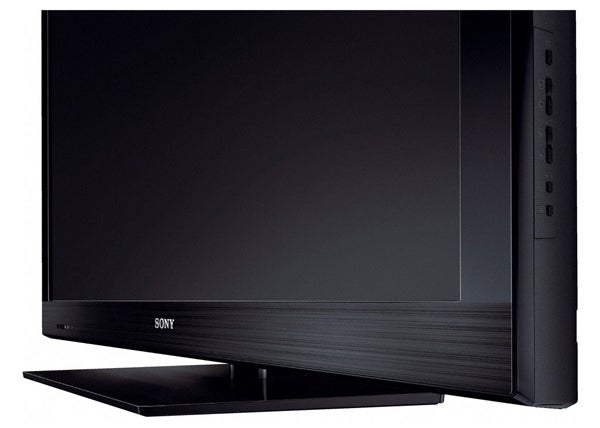 There are also countless other video sources
besides, taking in everything from ‘How To’ guides to HD video showcases and
golf tips. The set even supports Skype, something that’s reserved for premium
sets only with some other brands (Samsung!).

The bottom line is that while Bravia Internet
Video (currently, at least) doesn’t currently have much at all going on where
gaming and infotainment apps are concerned, it’s streets ahead of its rivals in
terms of video content. And so far as we’re concerned, video content is king
with this whole ‘Smart TV’ malarkey.

The 40CX523 even carries an Internet browser,
even though this isn’t particularly easy to use due to its text being rather
small, and predictable issues with navigating web pages and inputting web
addresses using a TV remote control.

It’s good to see, too, that the 40CX523 employs
the same improved onscreen menu system as the 32EX723. This finds the twin-axis
menu system appearing along the right and bottom edges of the screen while a
reduced-size version of the TV programme you were watching appears unblemished
in the top left portion of the screen.

The new menus organise the Bravia Internet Video
content much more succinctly, though there’s still room for improvement as the
amount of icons strewn across the bottom of the screen still feels intimidating
and requires a while to learn your way fully around.

Finding the full Bravia Internet Video system
and Skype on the 40CX523 is a real boon considering its entry level status. 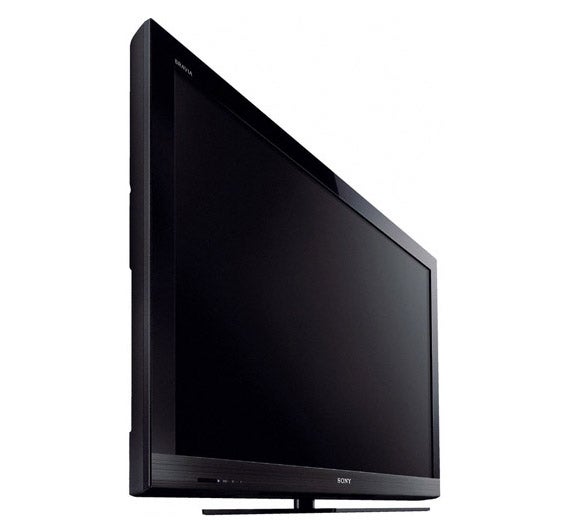 The 40CX523 perhaps lives down to its price
rather by only having 50Hz scanning, but it isn’t entirely without its
processing attractions, since it sports Sony’s new X-Reality engine, designed
to add detail to standard definition pictures while also suppressing noise. And
it works rather well, actually. Certainly standard definition upscaling isn’t
the very best we’ve seen, but it does look decently sharp and noise levels are
definitely kept in check.

Or at least that’s the case when there isn’t
much motion going on. For there’s no doubt that motion is affected by
noticeable blurring, especially when watching standard definition pictures.

Having set off down a negative trail with this
talk of motion blur, we might as well add that the 40CX523 has another slight
problem in the shape of a rather hollow look to very dark parts of the picture.
The screen is obviously having to take quite a bit of brightness out of the
picture to achieve a credible black colour during dark scenes, and it’s this
that results in shadow detail getting squeezed out of the picture.

Perhaps the most irritating flaw with the
40CX523’s pictures, though, is the appearance in the screen’s corners,
especially the upper corners, of some noticeable backlight bleeding. To be
fair, this is subtle enough to only be visible during predominantly dark scenes
that have some bright elements in them, or over the black bars if you’re
watching a 2.35:1-ratio film. But the bleeding light does occasionally
momentarily distract you from what you’re watching. 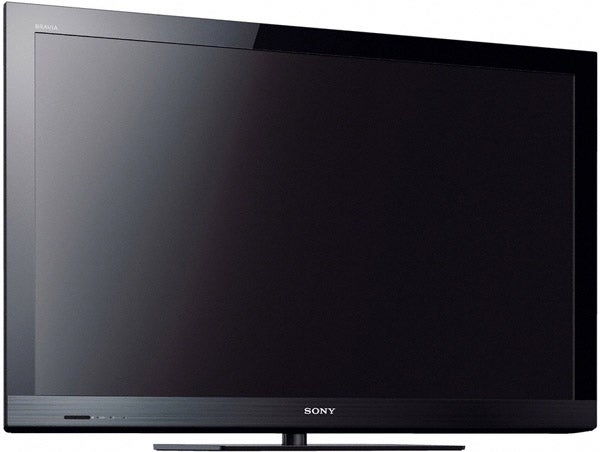 Before all this negativity starts to make you
feel too despondent, though, the 40CX523 has plenty of good things to counter
the problems. For a start, while there are issues with the 40CX523’s black
level response, the set is actually capable of getting pretty dark when it
needs to. In fact, the level of blackness the TV can achieve post calibration
rivals some of the best edge LED TVs, despite the fact that the 40CX523 is
illuminated by standard CCFL lighting.

Also notable about the 40CX523’s pictures is how
rich and bold their colours are. This helps images look dynamic and punchy, and
although some red and orange tones can look a bit ‘shouty’ in the TV’s
out-of-the-box state, most imbalances can be smoothed out by some
fairly minor adjustment of the TV’s basic colour tools.

HD sources look impressively sharp for such a
cheap TV, aside from when there’s a lot of motion going on, and perhaps most
pleasingly of all, the image looks engagingly direct, avoiding the processed
look we sometimes see with more expensive TVs that pack heavy duty video
processing systems. 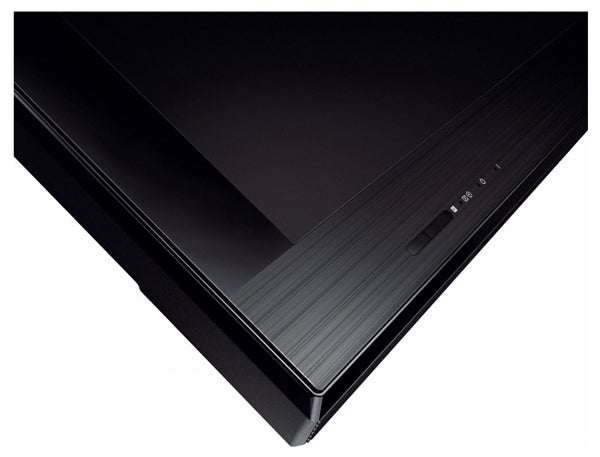 The relatively straightforward route the pictures take from source to screen, especially using the TV’s Game preset, is probably responsible for the 40CX523’s good input lag performance, which we measured at a very respectable 35ms.

Keeping the good times rolling is the 40CX523’s
audio. For this is much more potent than we usually hear with entry level TVs,
with a pleasantly open tone, a modicum of bass, and amounts of treble detail
that are usually only heard on premium TVs. Push volume levels too high and the
TV’s plasticky bodywork starts to infect the audio with a slightly brittle
tone. But the fact that this is all we’ve got to complain about on a sub £650
40in TV speaks for itself.

There are things about the 40CX523 that do their
best to irritate us – most notably its motion blur and slightly inconsistent
backlight. But overall, given its price, it’s the TV’s AV strengths and,
especially, its superb multimedia and online talents that linger most in the
mind.


How we test televisions