While Sony had a number of new TVs to show off at this year’s IFA show, by far the most exciting new model was the 75X9105C.

The most instantly striking thing about the 75X9105C is the size of its screen. Even on a show floor where big TVs were 10 a penny, the 75 inches of this Sony model stood out from the crowd. Especially when, as in this case, all those screen inches are somehow stuck on the front of an ultra-thin rear that’s just 15mm deep at its slimmest point.

This doesn’t quite compare with the extraordinary 4.8mm depth of Sony’s smaller-screened X9005 models, but when push comes to shove 75 inches of screen does have to be supported on something. And the design ensures you don’t feel aware of either the screen’s depth or its frame while you’re watching it, leaving you free to focus completely on the gargantuan pictures.

I’d initially had concerns about the 75X9105C’s potential picture quality when I first heard about it during Sony’s IFA press conference. After all, the two ultra-slim X90 models in Sony’s current range use IPS panels, which we’ve found struggle to deliver a convincing contrast performance.

However, as soon as I managed to get ‘eyes-on’ with the 75X9105C, my concerns started to dissipate. While the demo footage Sony was showing on the TV didn’t feature any really deep content with which I might have accurately gauged its contrast performance, shaded parts of the image certainly looked more convincing than I’d expect if this was an IPS panel. 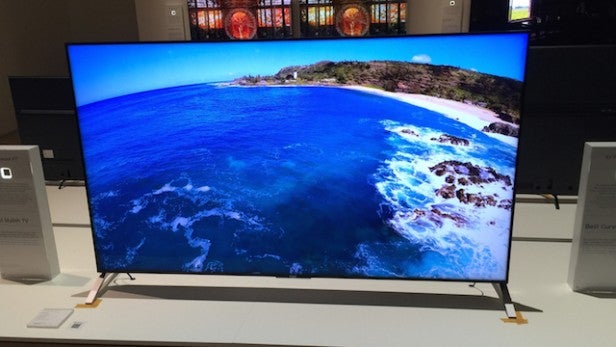 Even more promisingly, dark colour tones looked realistic and as rich as bright ones. The screen’s extremely impressive brightness didn’t seem to be dragging all the colours and shaded areas ‘upwards’ in the colour scale, as tends to happen if a TV doesn’t have decent black-level response to counterpoint its brightness.

All these good first impressions prompted us to ask Sony whether its new TV was using an IPS panel. And while industry politics prevented them from confirming this outright, they were prepared to tell me that the screen uses an active rather than passive 3D system – as sure a sign as there is that the 75X9105C isn’t using IPS.

Getting back to watching the 75X9105C strut its stuff, I was also hugely impressed by the amount of sharpness and detail it reproduced from native 4K footage. It’s no surprise to find that this set uses Sony’s latest 4K-optimised X1 video processing. This processing engine’s combination of extended colour resolution, noise reduction and contrast optimisation circuitry has already worked well on TVs such as the 75X9105C’s 75-inch sibling, the 75X9405C.

The 75X9105C also benefits from Sony’s Triluminos technology for producing a wider colour gamut, and this too is given full rein by the screen’s brightness and resolution charms.

Actually, mentioning the 75X9405C a moment ago brings us back full circle to the newer 75X9105C’s design. Much as I might adore Sony’s 75X9405C, the huge speaker-bearing wings make it a TV that few households will physically be able to accommodate. While the new 75X9105C certainly doesn’t give you the peerless built-in TV sonics of its sibling, it does at least increase your chances of actually being able to fit a 75-inch Sony TV through your door.

The 75X9105C is due to launch by the middle of September with a price that’s anticipated to be around the £6,000 mark.