Sony’s first foray into 4K curved TV territory – at least where the UK marketplace is concerned – isn’t shy about coming forward. The 75-inch set from the S9005B curved range (a 65-inch model is also available) was practically hitting passersby in the face from its position at the corner of a central section of Sony’s stand at the IFA 2014 technology show.

Obviously the fact that its screen is 75 inches across contributes significantly to the 75S9005’s visceral, monolithic impact. But its curved screen enhances its aesthetic impact too, adding that touch of glamour that always seems to accompany curved TVs (at least for now, while they’re relatively uncommon!).

If you’re a fan of tech for tech’s sake we guess you might feel a little disappointed about the relative shallowness of the 75S9005B’s curve versus other curved TVs. But Sony has gone for this gentler approach in response to independent research suggesting that steeper curves have too negative an impact on image geometry. 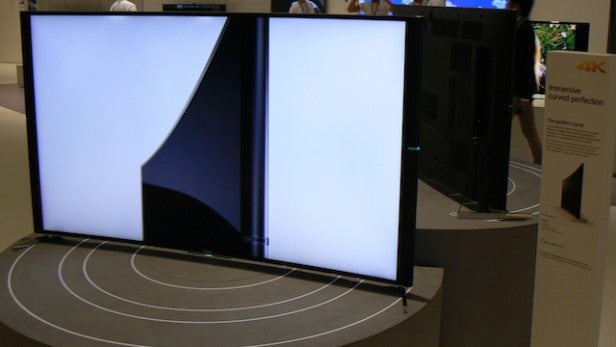 Yet another reason the 75S9005 makes such a visual impact is the width of the left and right sides of its frame. It doesn’t stretch quite as far as the massive wings attached to the Sony X9005B 4K TVs, but its rounded edges certainly extend a couple of inches beyond the outer edges of the screen.

As with the X9005B’s massive wings, though, there are very good practical reason for the 75S9005B’s largeness. First, two bright lights in the centre of each side bar are colour coded to tell you at a glance which source you’re watching. Second, within those rounded left and right edges lies an innovative new speaker system which combines speakers firing at different angles, audio processing and deflection technology to expand the soundstage well beyond the TV’s physical boundaries.

In fact, as was proven in a special audio demo booth at IFA, the 75S9005B’s audio system is even capable of creating a reasonable sense of surround sound, where accurately placed effects genuinely appear to be coming from behind you.

Many, many TVs have attempted this ‘pseudo surround’ effect, but we’re struggling to think of any that have actually pulled it off as successfully as the 75S9005.

The IFA audio demo did expose a bit more harshness in the soundfield than we’ve noticed in previous demos of the S series sets, as well as revealing that dialogue can sound a bit overwhelmed during action scenes. However, we’re not actually too alarmed by any of this, as we suspect the issues are down to the speakers needing to compete with the general IFA hubbub and fill a huge physical space. In a more typical domestic environment running at a more reasonable volume we suspect the harshness would greatly reduce or even dissipate entirely.

While the breadth of footage Sony was feeding the 75S9005 on its stand was disappointingly limited, you could still tell that it’s shaping up to be a quality picture performer. Colours enjoyed that combination of richness and shade subtlety you get with Sony’s Triluminos technology, and detail levels were extremely high with the native 4K content Sony was using – especially when you’ve added the Triluminos colour subtlety to the 4K resolution equation. 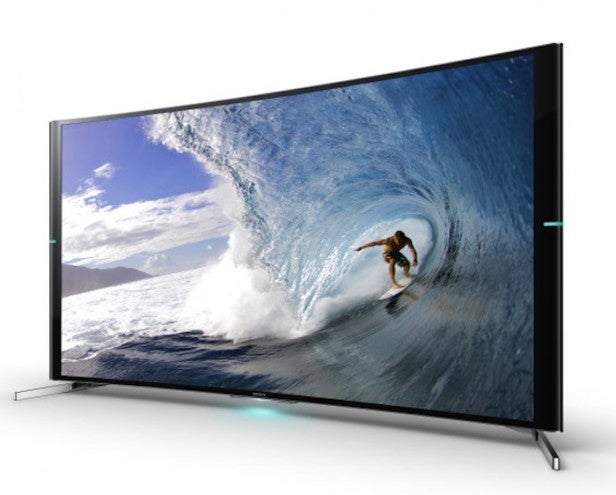 We’ve long maintained that curved TVs make more sense the bigger your screen gets, and the huge 75-inch screen on Sony’s new set reinforces this impression, giving you a slightly enhanced sense of immersion versus flat TVs that persists from a wider range of viewing ‘sweetspots’ than you get with smaller curved screens. The gentler curvature of Sony’s screen does not deliver quite such an extra sense of immersion or image depth as the steeper curve of Samsung’s curved TVs, but it also doesn’t have such a troubling effect on geometry – especially when viewing off axis.

The combination of the type of content Sony was showing on the 75S9005 and the unforgiving glare of the section of the stand the TV was placed in made it impossible to formulate any sensible early opinion on the set’s contrast performance. But one thing the bright lighting did help us feel pretty good about was how hard Sony’s set seemed to be fighting the distorted reflection problem curved TVs suffer with. Reflections seemed less bright and clear than they’ve tended to be on most other curved TVs, and the gentler curve also perhaps slightly reduces the extent to which reflections are spread across the screen.

The bottom line is that the 75S9005B is looking set to be another seriously fine addition to Sony’s 4K TV range, leaving us counting down the days until an S9005B turns up for a proper test.

Next, check out more Sony TVs