As with the flat-screened Sony 65X9005B, the 65S9005B’s 3D performance falls well short of its 2D efforts – for the same reason, too: crosstalk. Any shot containing either a lot of depth or extreme foregrounding suffers quite heavily with crosstalk’s double-ghosting noise, which can make some shots look out of focus and cause pretty rapid eye fatigue as your brain keeps trying to pull the ghosting areas into focus.

On the upside, the 65S9005B’s 3D pictures look slightly more rich in definition than those of the X9005B – when the crosstalk isn’t excessive, anyway – with genuinely 4K levels of detail appearing at times via the upscaling engine. Colours also hold up brilliantly, as the Triluminos ‘punch’ helps counter the brightness reduction introduced by the active-shutter 3D glasses.

The screen’s contrast performance continues to impress, helping the TV deliver a well-defined sense of 3D space and retaining the sort of subtle shadow details that are always key to reproducing depth with dark images. 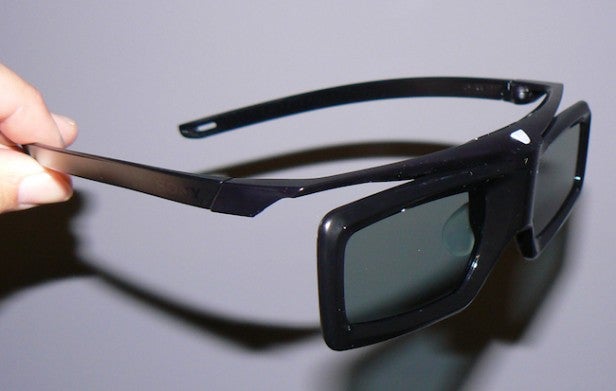 Nor is there significant flicker – so long, at any rate, as you’re watching in a reasonably dark room. Finally, Sony’s motion processing is arguably even more impressive in 3D mode than it is with 2D, doing a superlative job of removing the judder that’s so commonly witnessed during 3D viewing, but without causing the image to look heavily processed.

The backlight clouding issues are a little harder to remove with 3D, though, given that 3D usually needs to be watched using brighter settings than you need for 2D.

But, ultimately, the most defining thing about the 65S9005B’s 3D performance is the amount of crosstalk it suffers from.

The 65S9005B’s Multi-Angle speaker system works brilliantly, producing a phenomenally wide soundstage that extends well beyond the confines of the TV’s bodywork both in front of you and behind you. Yes, that’s right – the 65S9005B’s speaker configuration really does produce a sense of surround sound.

It has to be said that the appearances of these ‘rear channel’ effects can feel a little random, but hearing any rear audio at all from a TV’s built-in speakers is remarkable enough.

The soundstage can deliver massive distortion-free volumes to go with its width and scale, and the mid-range sounds open, clean, and able to expand to meet the demands of action scenes.

There isn’t as much bass in the mix as you get with the X9005B series, but you certainly never feel as if the soundstage is flat or harsh. Plus you could always add one of Sony’s excellent wireless subwoofers to the TV if you really feel the need to ramp up the bass.

The 65S9005B is a pretty spectacular gaming monitor. As well as having beautiful, immersive images, it proved to  have just a 34ms input lag when using its Game picture preset. This is one of the lowest figures we’ve measured from a 4K TV, and should keep pace with your gaming reflexes.

Judged purely on its all-important 2D performance the 65S9005B is a superb TV, boasting class-leading colour response, lovely contrast, and stellar clarity with HD and native 4K content. The only issue is that it’s debatable how much the gentle curvature brings to the table, making the 65S9005B’s £550 price premium over the flat 65X9005B look a bit hefty.

The 65S9005B is awesome with 2D but not so great with 3D, and it’s debatable whether the marginal benefits of its gently curved screen are worth the extra cost. But if it’s curves you want, this is a terrific, subtler alternative to the more aggressively curved Samsungs.