The 55-inch version of the XH95 follows in the same vein as the 65-inch model with its impressive HDR images. The sound system is also impressive, as is its motion and upscaling skills. Issues with blooming and a lack of 4K/120fps may make it less attractive for some, but the 55XH9505 demands the attention of anyone who enjoys vibrant and colourful picture quality.

Fitted with Sony’s best in class X1 Ultimate picture processor and Acoustic-Multi Audio technology, the XH95 aims to give your TV shows and films a colourful boost.

Related: All the Sony 8K, 4K, OLED and Bravia TVs

Sony has gone down the minimalist route for its 2020 TVs, its One Slate aesthetic intends for the TV to ‘disappear’ into a living room. It looks slick when viewed head-on, the materials used give the XH95 a premium feel. 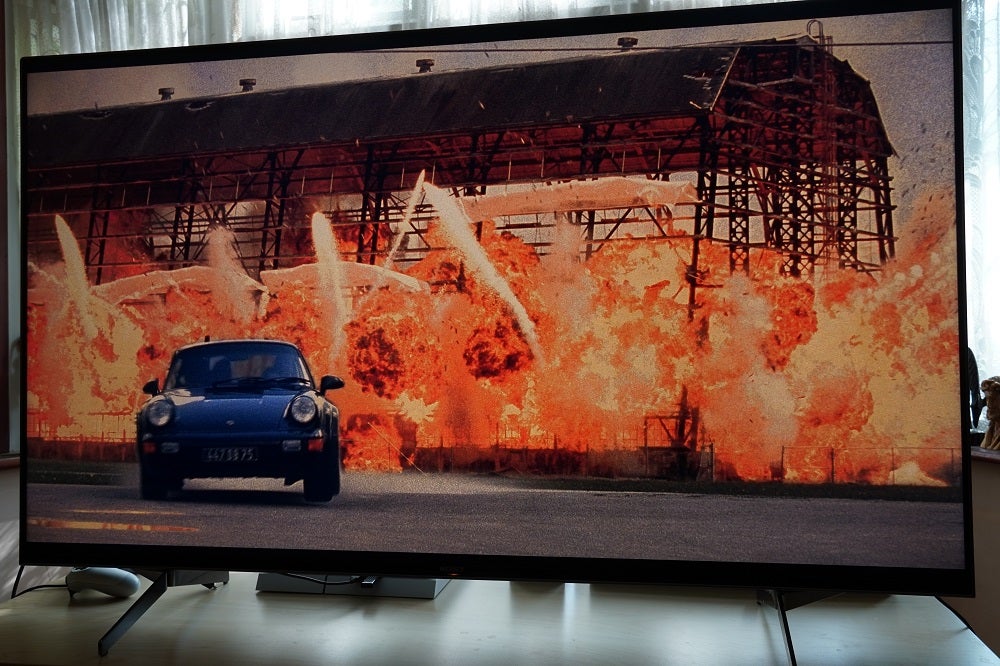 The XH95 can be set up in three configurations. One option is wall-mounting and you’ll need Sony’s SU-WL850/SU-WL480 wall brackets, which are sold separately. The other two see the feet placed in central or wide positions. This is useful in that not everyone has a stand or rack wide enough to accommodate a set with feet towards the end.

Assembly is initially confusing given the two configurations, but once the pieces have been screwed together it’s fairly straightforward – slot the feet into the bottom of the TV and you’re done. 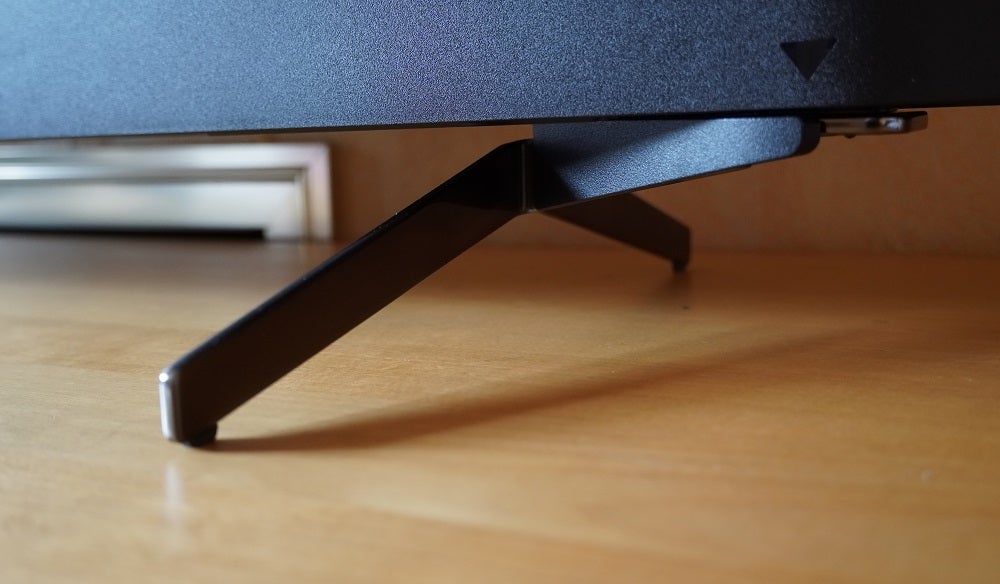 The TV bulks out at its rear (it weighs 18.1kg) to fit in the XH95’s local dimming system. The connections are side-facing, and the TV has a cable cutter feature with a Velcro holder to keep cables in place. That only seems to be a benefit when the feet are placed out wide, though.

The XH95 is issued with a very good remote. It exudes a minimalist feel with its (presumably) aluminium finish and features backlit buttons so you can see what you’re pressing in the dark. It also comes with quick access buttons for Google Play and Netflix. 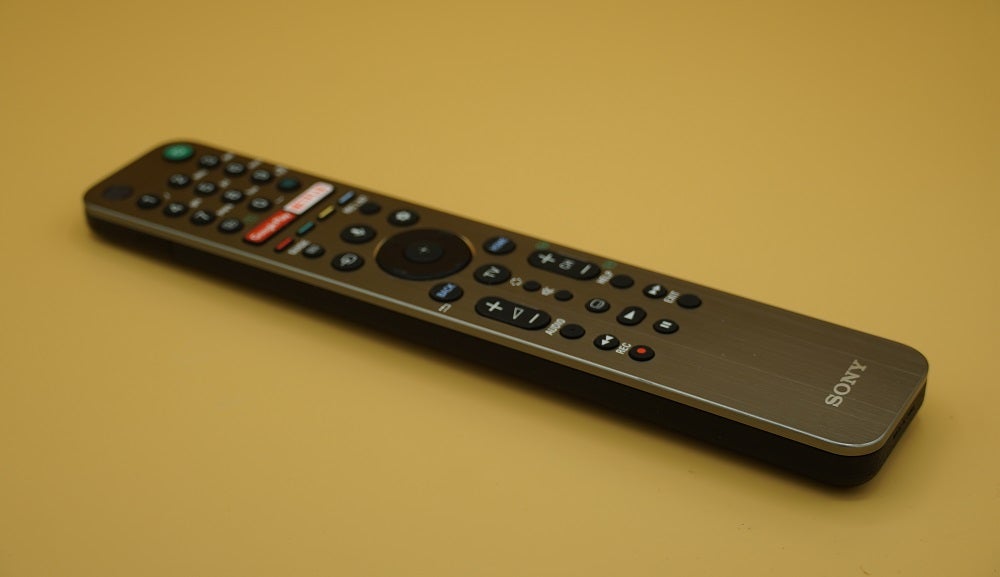 Sony XH95 features — Lots of features, but not ‘Ready for PS5’

There’s no 4K/120Hz support, which is a curious decision but perhaps made clearer with the more affordable step-down XH90 certified as ‘Ready for PlayStation 5’. Even so, Game Mode measures at 18.5ms, which is a fair result that still lags behind Samsung and LG.

Rather than mimicking what its rivals are doing, Sony has burrowed its own path to make the XH95’s rather distinct. For one it isn’t deploying its own AI picture enhancement like LG, Philips and Samsung, relying on its X1 Ultimate picture processor to deliver punchy colours and upscale non-4K sources to near 4K.

For sound Sony has included its Acoustic Multi-Audio speakers and X-Balanced speaker configuration, with multiple speakers (including two tweeters) that optimise the placement of effects on-screen with increased fidelity and clarity. 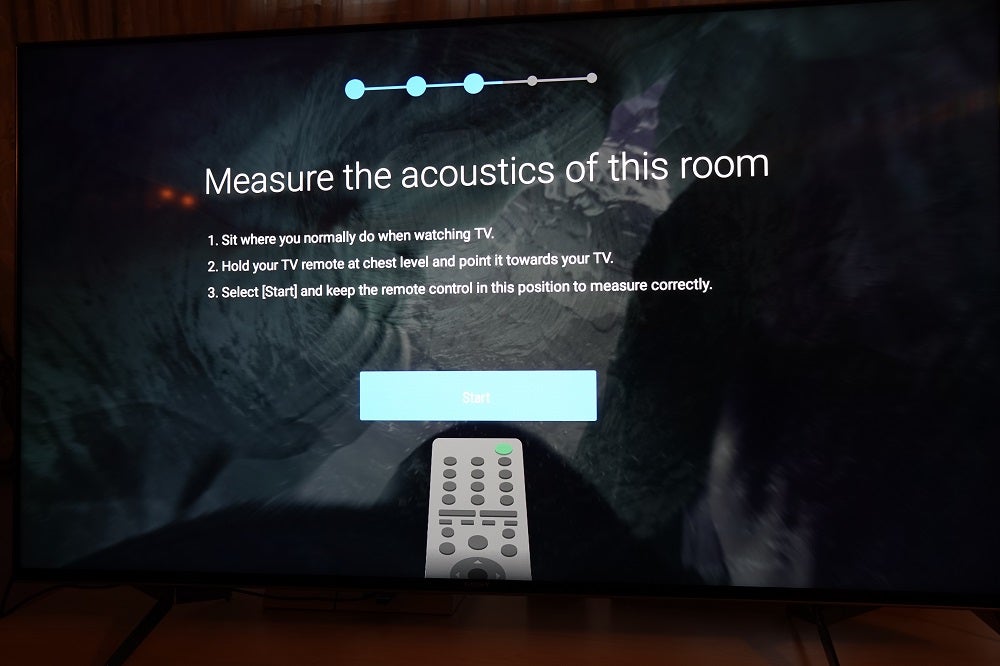 Ambient Optimization is new for 2020 and calibrates the picture and sound by assessing the environment around the TV. For audio it’ll use the microphone in the remote to fine tune its performance.

Sony has not adopted Filmmaker Mode or Dolby Vision IQ, and its HDR support extends to the ‘standard’ Dolby Vision (Bright and Dark versions available), HDR10 and HLG for broadcast. Sony continues to ignore the Samsung-backed HDR10+ if that’s of any interest.

Related: Everything you need to know about Dolby Vision HDR 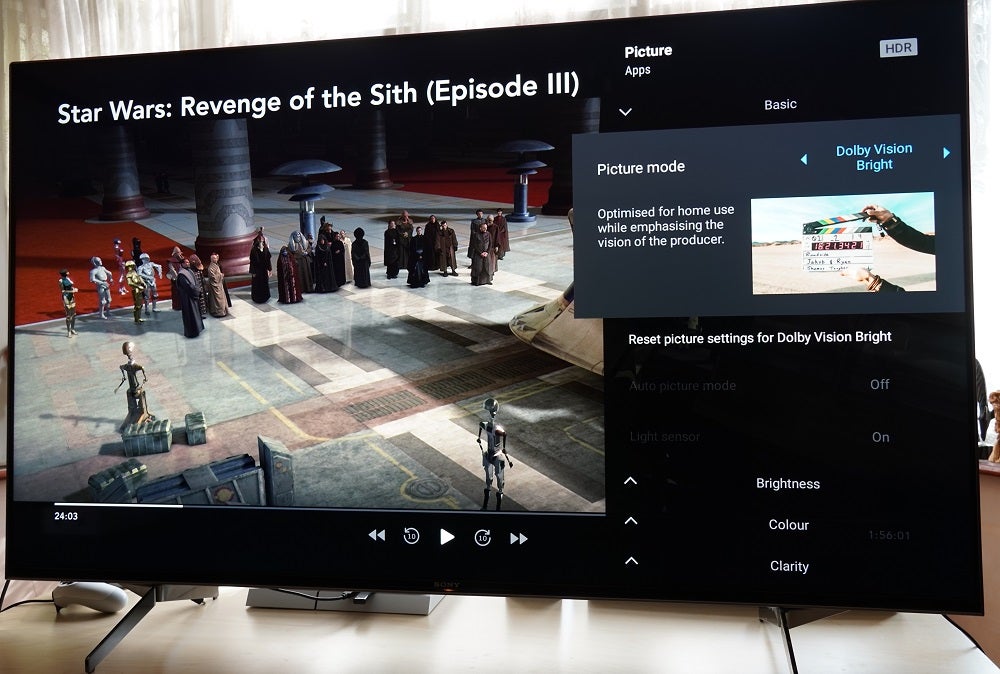 Sony were, however, one of few manufacturers to back Netflix Calibrated Mode. It’s effectively Cinema Mode for Netflix, and makes content look more cinematic but also noticeably dimmer. The XH95 also supports IMAX Enhanced content, though content, while growing, remains thin on the ground.

Related: What is IMAX Enhanced?

The smart interface is Android, which offers access to apps in the Google Play Store such as Disney+, Netflix and Prime Video. You also get Chromecast and Google Assistant built-in, and the XH95 also ‘works with’ Alexa via an external speaker, supports AirPlay 2, Apple HomeKit and later in 2020 will get the Apple TV app.

Related: What is Netflix Calibrated Mode? 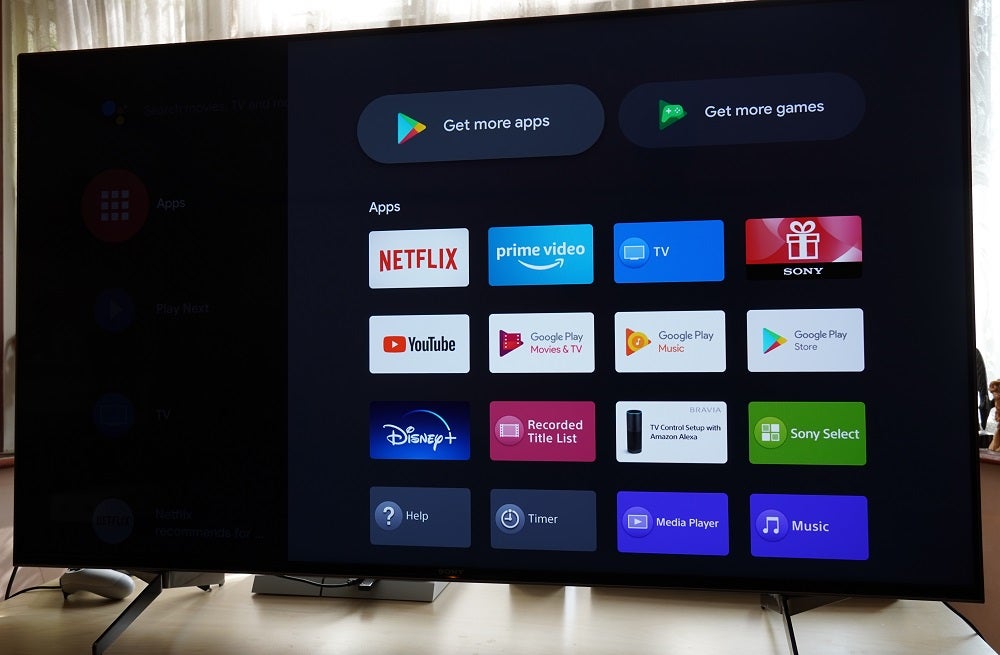 Android OS is neatly ordered into rows and offers personalised content and recommendations. Android doesn’t have UK catch-up apps, relying on integration with YouView TV to provide them. It’s a solution that lacks the convenience of others, and a further drawback is that voice control doesn’t work with YouView either. Sony has simplified its own menu system, adding graphical descriptions to give the viewer a clearer understanding of what each setting does. 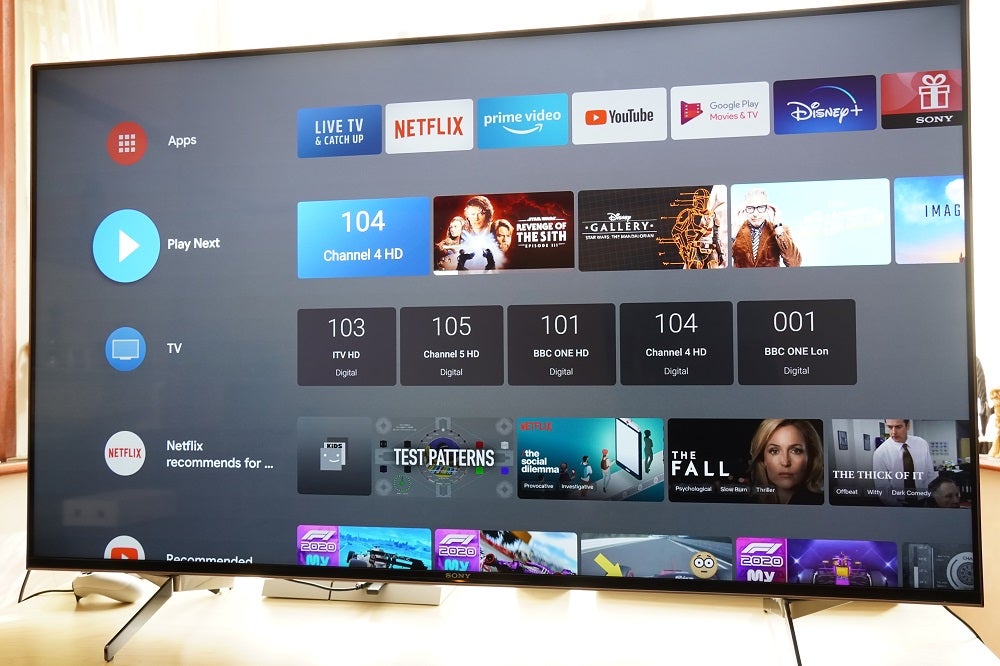 Connections tally at 4 x HDMI (with one eARC compatible), a terrestrial and two satellite connections, composite, digital audio out and two USB ports. For wireless connections the set supports Wi-Fi and Bluetooth 4.2. 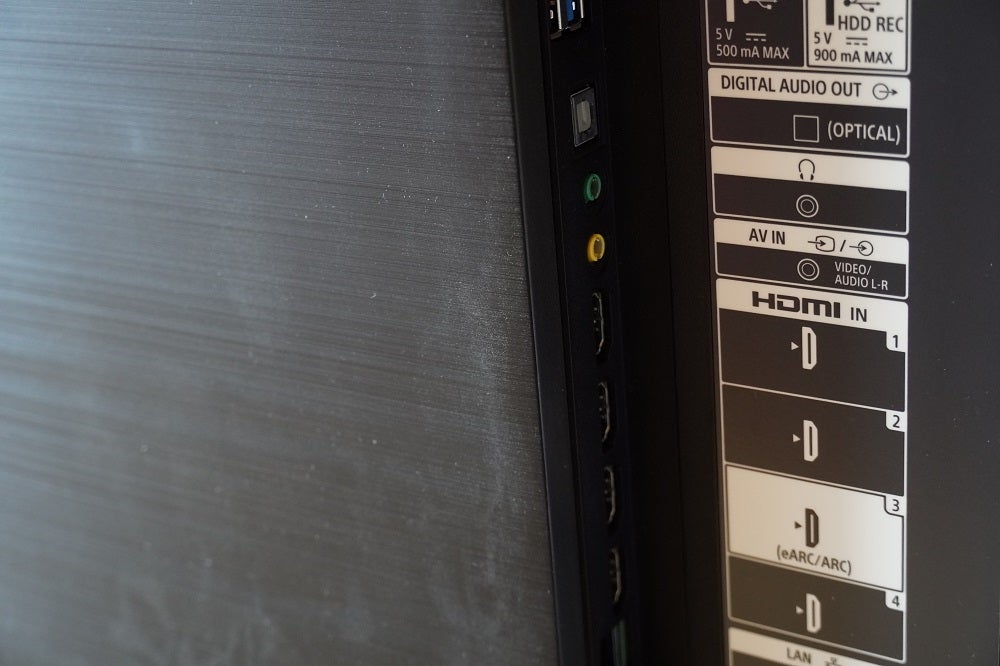 When it comes to the picture performance, the XH95 delivers some of the most intense HDR images of any TV I have seen in 2020. It is immediately eye-catching in a way that speaks to the benefits of HDR. 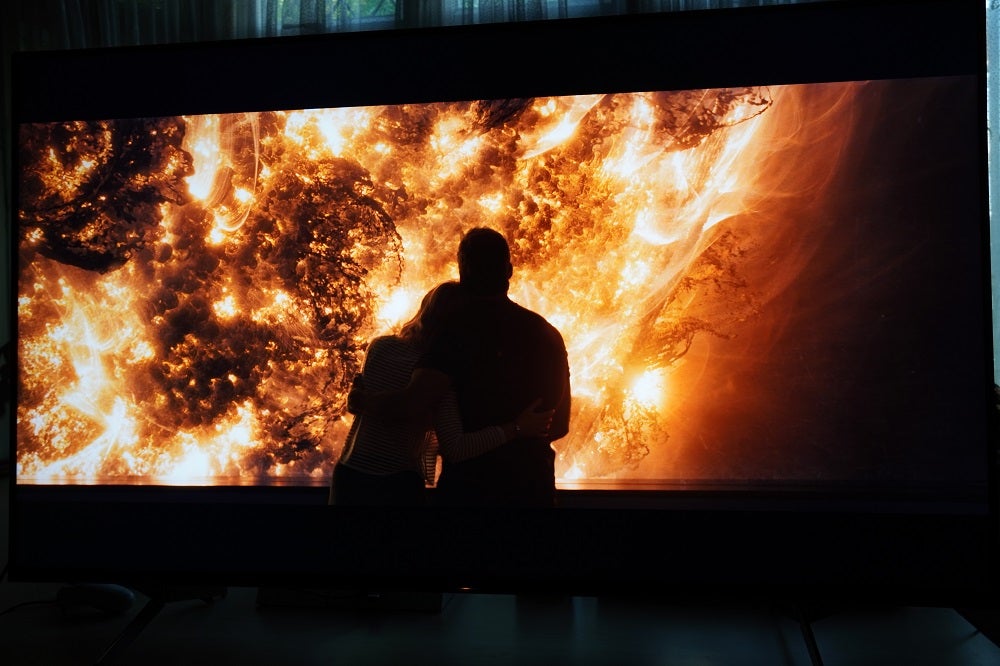 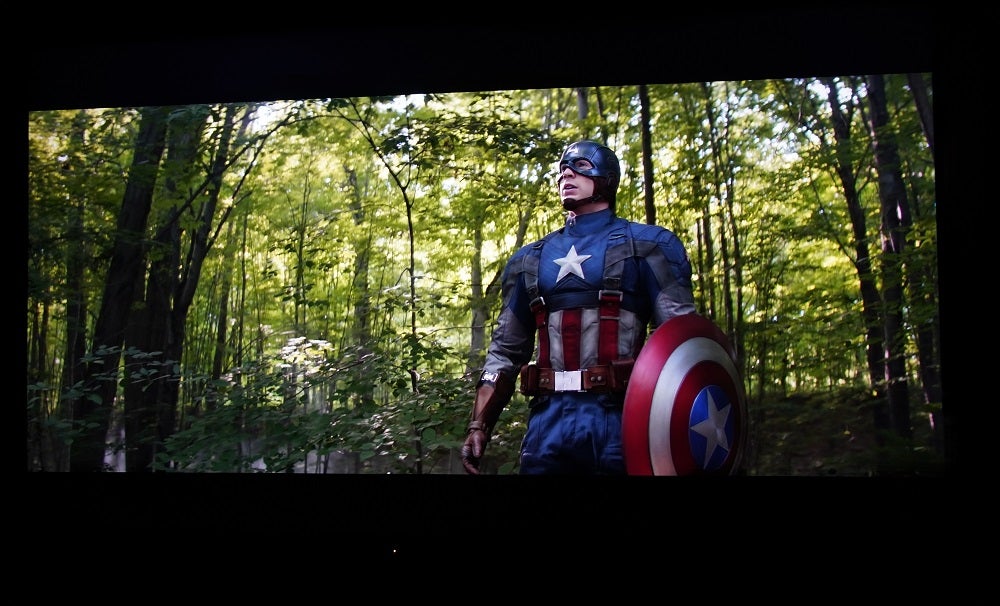 Contrast feels like it’s been set to 11 (or more) with 4K HDR content dazzling in its scope and intensity. The scene in Jurassic World where the boat heads towards Isla Nublar for the first time and the whites of the boat’s surface are conveyed in a bright and spectacular-looking manner. The XH95 seems to devour whatever you give it, producing a lush, colourful and attractive picture while also retaining a sense of naturalism that makes for colours that are expressive and beautiful. 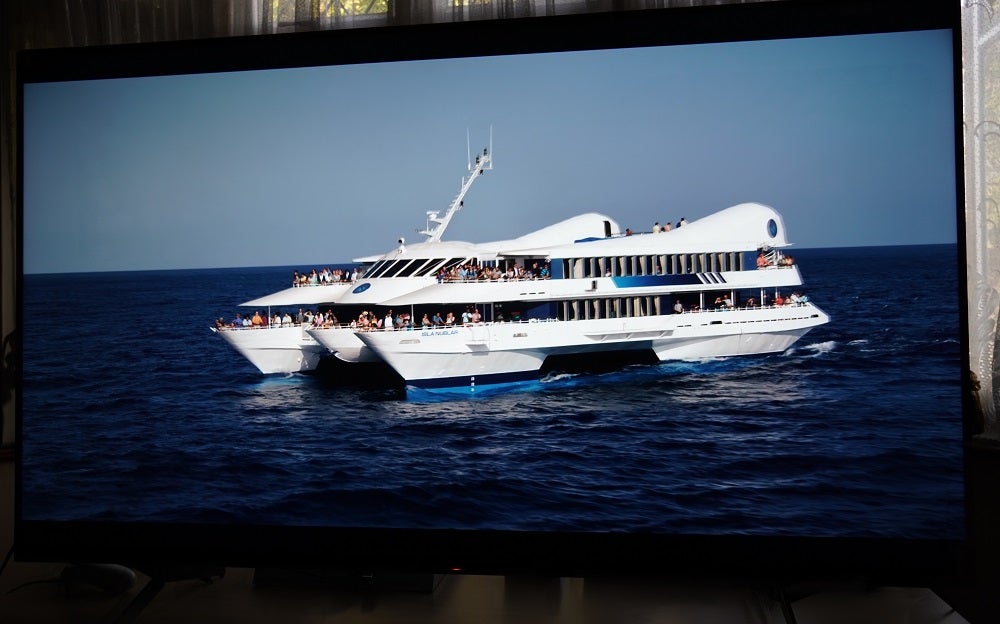 Upscaling of both SD and HD content is excellent, with less blurring, artifacts or noise for a smooth all-round performance. There’s an obvious fuzziness with SD content, but the image remains coherent, decently detailed and has good colour reproduction. 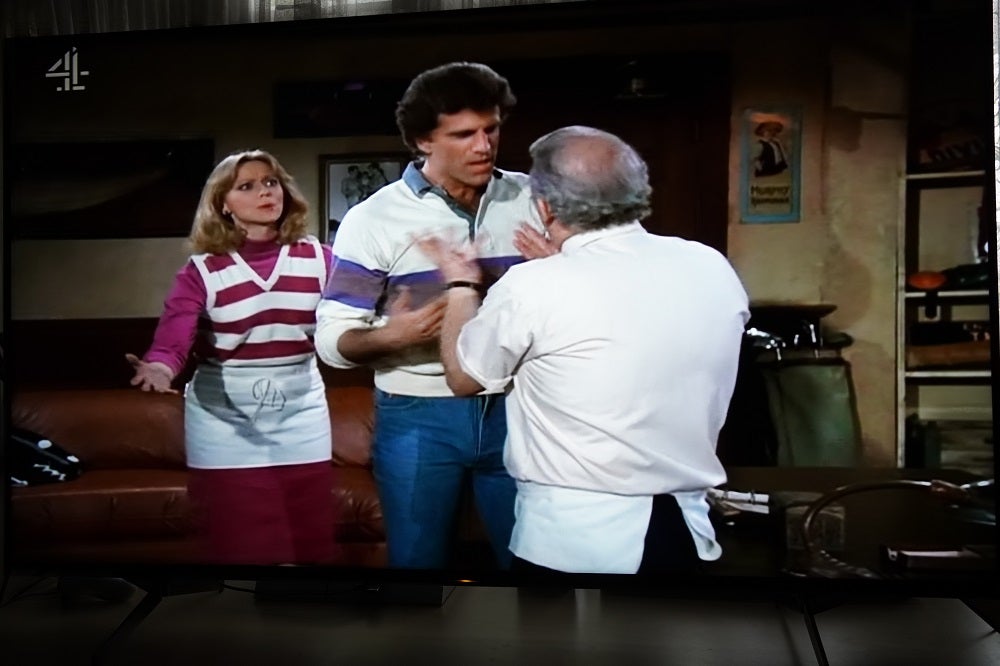 HD shows plenty of confidence with high detail levels, convincing textures and crystal clear clarity, with colours putting in a punchy and vibrant showing. Faces and skin-tones are wholly convincing, with no noticeable evidence of haloing, artifacting or images looking anything other than sharp, clear and precise. 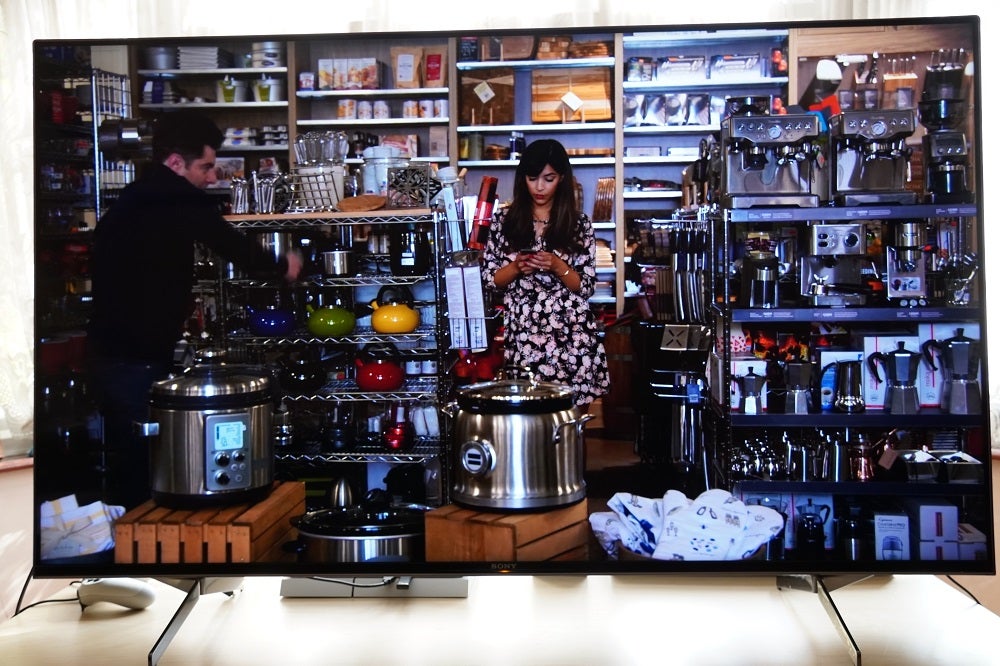 What’s even more impressive is Sony’s X-Motion Clarity. It’s a setting I’m often happy to disable but the XH95’s skill with fast-moving content is superbly slick as the ‘soap opera’ effect is diminished and judder and blur minimised. The opening credits of The Simpsons flow smoothly by and the scene in 1917 where Schofield and Blake walk through the trenches (Dolby Vision) is slickly rendered with no picture noise evident. 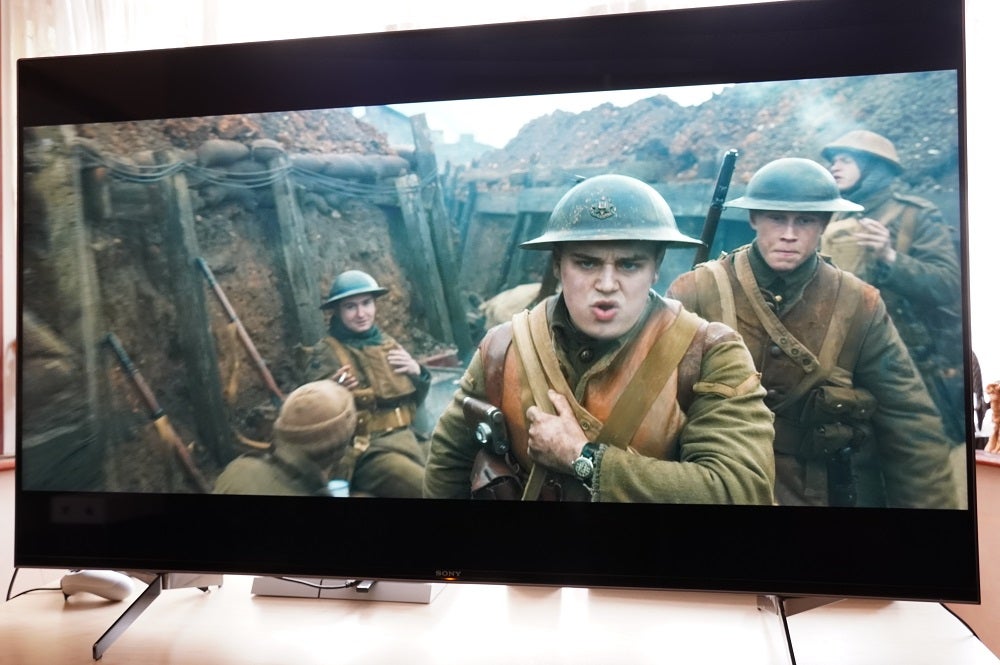 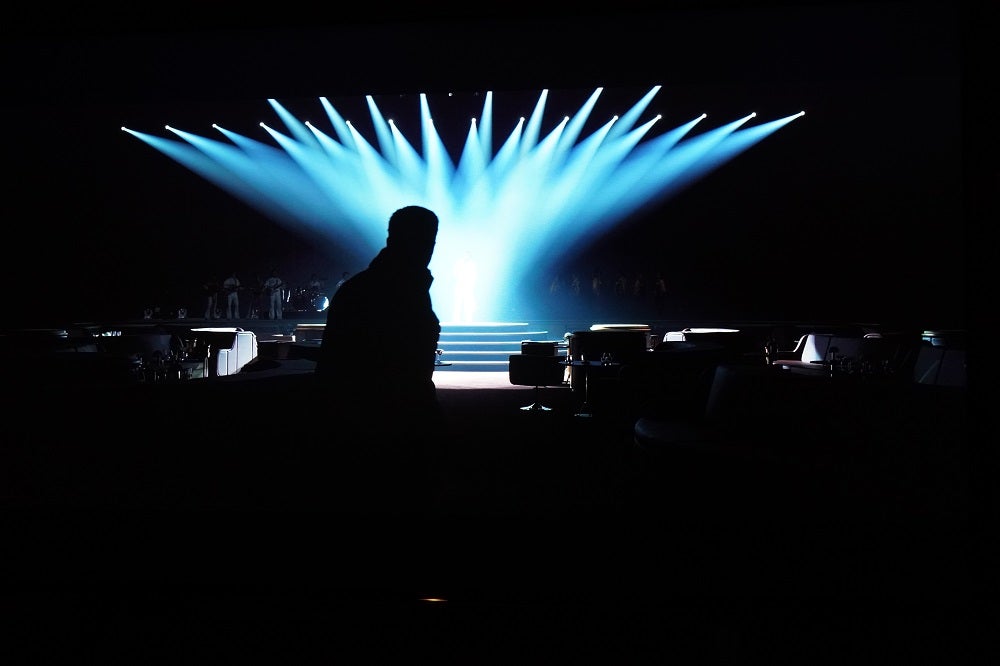 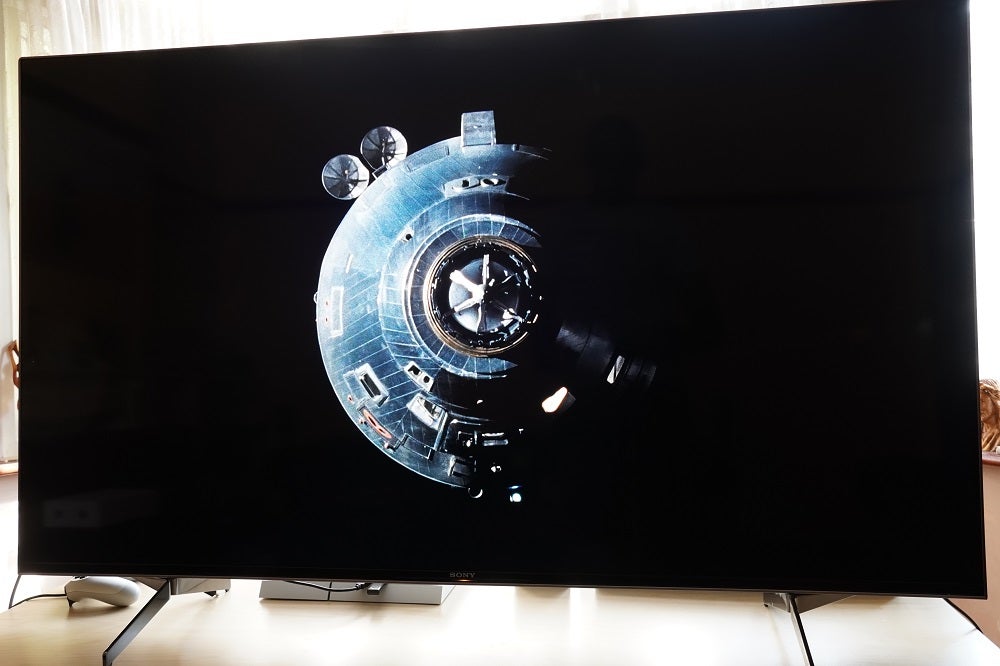 The trade off in HDR intensity appears to be blooming into the black bars above and below, as bright objects close to the edges of the frame noticeably bleed over. Wide angles are impressive – perhaps not quite to the level of QLED, but satisfactory in retaining contrast and the punchiness of colours at more limited angles. 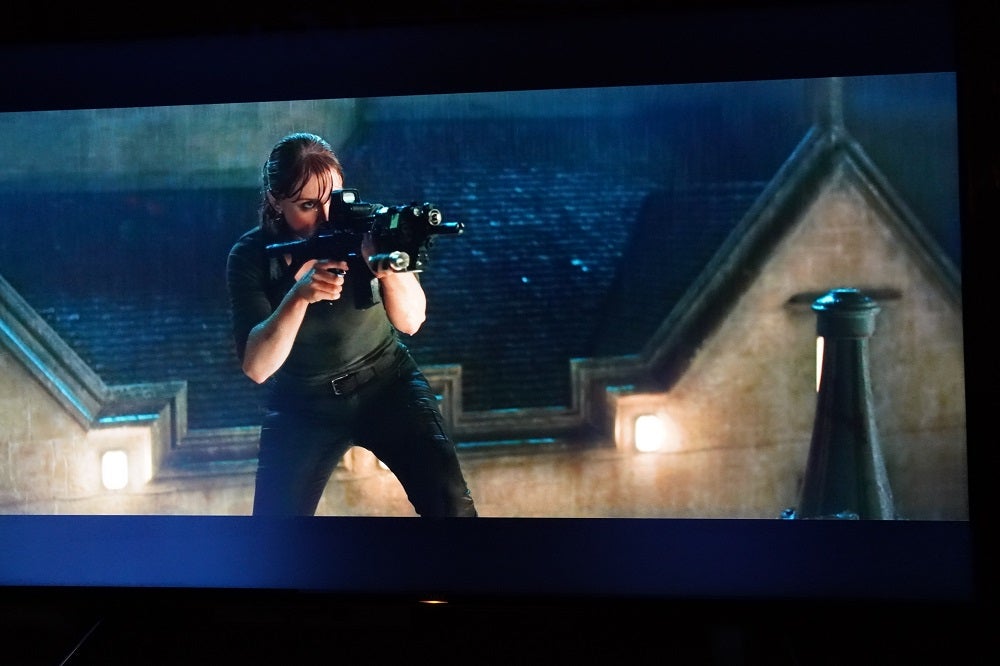 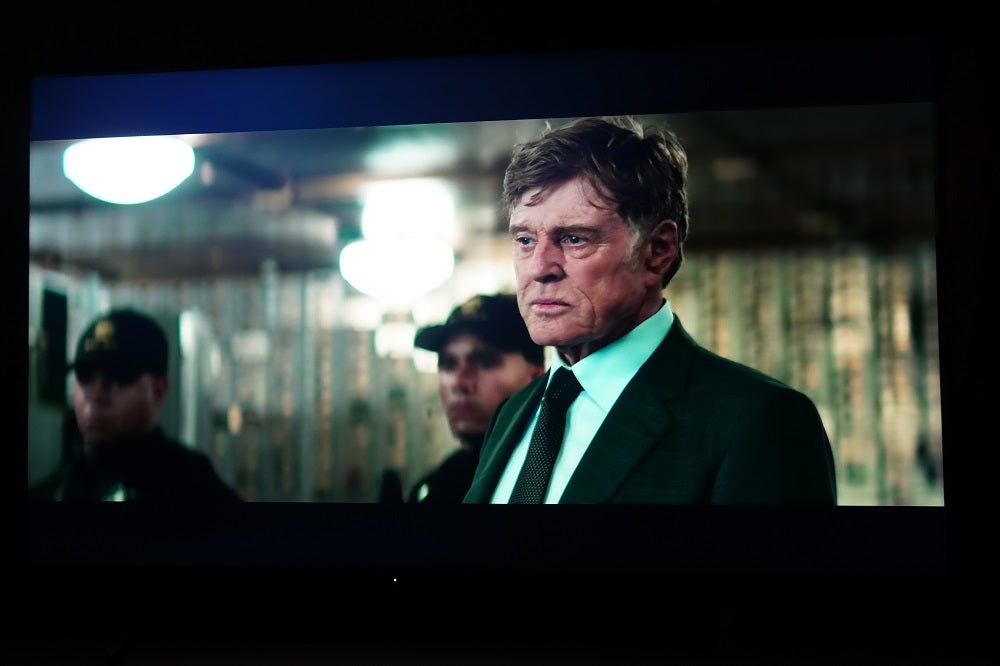 While I’d always recommend a soundbar, the XH95’s 30W Multi-Acoustic audio solution is impressive on its own. At times it floored me with its placement of effects and clarity. It’s not a big or wide sound, but it’s able to deliver a sense of height as shown in Blade Runner 2049 where the K’s spinner descends down to Sapper Morton’s farm at the beginning of the film.

Sounds are fired at the listener with clarity, and while I felt the effect of S-Force Surround Sound in the HT-G700 soundbar was overstated; there were moments playing Gears 5 where the sound actually made me flinch, thinking something had zipped past my ear. The accuracy and placement of sounds is also excellent. The scene in Jurassic World: Fallen Kingdom where the Indoraptor sneaks into a child’s room and the camera rotates so the top becomes the bottom. The effect is accurately relayed by the speakers, with the sound of thunder positioned in a way that makes logical sense to the scene. When it works, it is wonderfully immersive.

The sound system does struggle with busy and loud soundtracks, which become rather tame and lack intensity. Bass is fine, but as you’d expect from a flatscreen is not the strongest. At least there’s no distortion when faced with BR 2049’s dynamic range. It’s a capable sound system, but if you’re after a surround sound system a soundbar or surround system is still a must.

Sony has extracted fantastic performance from the XH95. From its HDR performance, to its black levels, upscaling of sub-4K content, as well as its motion skills and audio performance, it’s a fabulously entertaining TV.

Backlight blooming is an issue and seems to be the price you pay for its intense HDR performance. Integration between Android TV and YouView could also be better, and the omission of 4K/120fps support for the next-gen consoles is an odd one. However it’s hard to knock the XH95’s quality, though there are other options available.

The most obvious is the Samsung Q95T. It’s ready for the next-gen consoles and delivers higher peak brightness without blooming. It isn’t as good in terms of motion, but its upscaling prowess is just as formidable and the Tizen OS is better organised. It doesn’t have Dolby Vision though, and for streaming services and films that could tip things in Sony’s favour.