The KD-55A1 is a 55-inch OLED TV with a native 4K resolution and support for a wide range of high dynamic range formats. It boasts a stunning design, and uniquely uses exciter technology in the screen to deliver the set’s sound as well as its pictures.

However, this £3500 TV’s biggest attraction for AV fans is the way in which it combines the innate contrast and viewing angle appeal of OLED screen technology with Sony’s industry-leading video processing.

This is the 55-inch version of the Sony A1. For a look at the 65-inch version, read our Sony KD-65A1 review or watch the video below.

Update: also check out the Sony AF8 OLED, which is essentially the same TV without the leaning design.

The KD-55A1’s design is best summed up as sumptuous. The super-narrow black bezel surrounding the image and incredible slimness of the screen’s extremities create the impression that the pictures you’re watching are somehow being conjured out of thin air. Build quality, too, is sensational.

The use of a picture frame-like rear ‘leg’ to support the TV makes its rear view less elegant than that of rival LG OLED TVs. But since most people look at the front of their TVs from conventional viewing angles, there’s no doubt that the KD-55A1 is a stunner. Or you can wall-mount it.

The remote control supplied with the KD-55A1 is of a slightly superior build quality to the devices that come with Sony’s more mid-range TVs – such as the recently tested KD-65XE9005BU. It also ditches the disastrous flush finish button design that so ruined 2016’s Sony TV handsets. It’s still too busy in its central area to feel intuitive, though, and it remains a little lightweight and flimsy to partner such an uncompromisingly designed TV.

To get the best from the KD-55A1BU’s HDR pictures, start with its Standard picture preset rather than the Cinema and Cinema Pro settings. While the two Cinema modes produce the most accurate warm colour tones for video viewing, they fail to deliver nearly enough brightness to do the brightest end of HDR’s expanded luminance range justice.

That luminous look which the brightest whites and colours of HDR pictures should deliver simply isn’t present unless you select the Standard preset. Measuring the light output of the Standard and Cinema modes on a 10% white HDR window reveals 700 nits and 640 nits respectively – a significant difference that’s clearly visible during real-world viewing.

Having settled on the Standard picture preset, it’s worth toning down the strength of the Live Colour and Reality Creation tools from their default positions, and turning off noise reduction for native 4K content.

I’d recommend trying out different options for the KD-55A1’s MotionFlow processing, too. For me, turning it off entirely or using the True Cinema mode with movies were the best options – but such is the quality of Sony’s processing, I can imagine many users will stick with the relatively strong Standard setting. 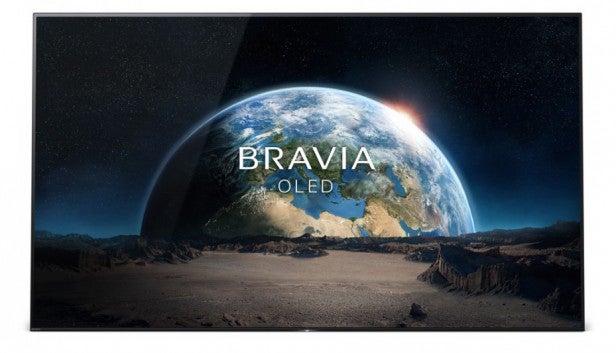 The KD-55A1’s screen uses OLED technology, meaning each and every pixel produces its own light level independently. This enables much more contrast-friendly light control than is achievable with even the best LCD TVs.

Driving the OLED panel is Sony’s top-level X1 Extreme video processing chip. This improves on the ‘ordinary’ X1 chipset found in Sony TVs from the XE9005 downwards by adding support for the premium Dolby Vision HDR system via a firmware update later this year. It also employs a dual database system for adding detail to and removing noise from HD sources when converting them to the screen’s native 4K resolution.

The TV will also support the industry standard HDR10 platform, as well as the HLG system set to become a big deal as HDR broadcasting takes off this year.

The KD-55A1 uses panel-vibration technology in the screen and a subwoofer integrated into the rear-mounting ‘leg’ to deliver sound, while smart features – including built-in support for Google Casting – come courtesy of Google’s Android TV platform.

For a more detailed exploration of the KD-55A1’s features, see our Sony KD-65A1 review.

Colours look particularly gorgeous. Sony’s Triluminos technology has been working wonders on the colours of its LCD TVs for years now, but its impact on OLED is even more powerful.

Saturations are gorgeously rich when handling the wide colour gamuts found with the vast majority of HDR sources (Netflix/Amazon streams, Ultra HD Blu-rays). Yet they never prevent the KD-55A1 from resolving even the tiniest of colour tone shifts. On the contrary, the ability of this TV to deliver pretty much infinitely subtle tones is one of its key advantages over LG’s OLED TVs -– especially where the reproduction of skin is concerned.

The KD-55A1 also makes the most of OLED’s intrinsic advantages when it comes to reproducing dark scenes. Parts of the picture that should look black genuinely look black, and even with HDR sources you won’t see so much as a hint of the backlight inconsistency or bars/halos of ‘accidental’ light seen with LCD screens. 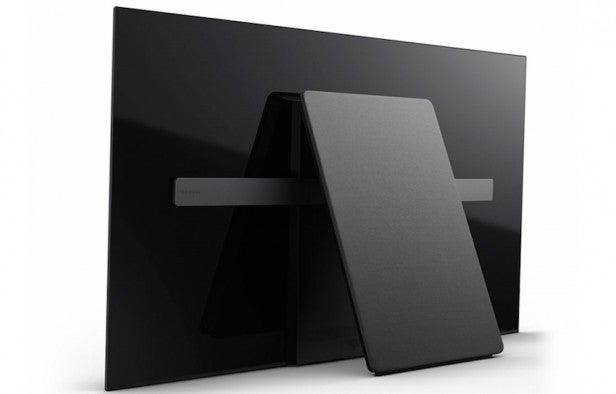 As well as achieving admirable black level stability, this TV handles noise in dark picture areas significantly better than LG’s 2017 OLED rivals. There’s hardly any of the fizzing in background walls or areas of dark colour, and none of the sporadic strange purple blocking noise in skies that other OLED screens exhibit from time to time.

One of the KD-55A1’s greatest strengths is its control over OLED’s supreme black level response. OLED has the ability to place a black pixel directly next to an intensely bright white one with no cross-pollution, and this helps the KD-55A1 delivers HDR footage with striking intensity.

The KD-55A1’s processing prowess is also powerfully apparent in both the detailed look to high-quality native 4K sources, and the unprecedentedly effective upscaling of HD sources to the screen’s 4K pixel count. The way Sony’s OLED set introduces more detail while simultaneously suppressing noise is a wonder to behold.

Sony also applies an undefeatable HDR upgrade process to standard dynamic range sources – that is, with all picture presets bar Cinema Pro. This may upset purists, but it’s more subtle than what most similar engines display, delivering results that are more consistently effective and natural-looking. 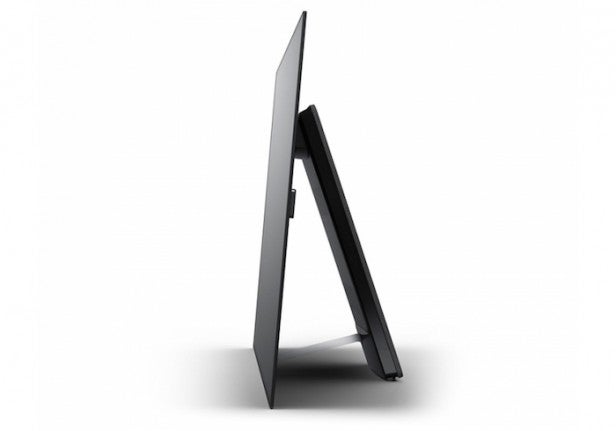 Add to this an almost infinite viewing angle without colour or contrast reducing, and it’s fair to say that Sony has well and truly stamped its authority on the OLED TV scene.

There are a couple of potential flies in the ointment, however. First and worst, perhaps, is that even if you use its Standard preset, the KD-55A1’s pictures are less bright than those of 2017 LG OLED TVs such as the LG OLED65E7. In either of the Cinema modes, the shortage of brightness is quite strikingly obvious, almost stopping HDR content from looking like it’s HDR.

The other issue is that while the KD-55A1’s input lag measures in at a respectable – although not brilliant – 40ms, its lag seems to cycle between higher and lower values, with the slightly high 51ms measurement cropping up the most.

While these two issues may raise red flags with serious gamers and/or people looking for a TV for a bright room, for most users they’ll stand as minor issues in the context of everything the KD-55A1 does spectacularly right.

Although the ‘screen as speaker’ technology might sound gimmicky, it works extremely well, delivering a loud, open, warm and immersive sound stage that’s comfortably capable of filling even a pretty large room. It’s only when you drive it really hard with a particularly raucous, dense action-scene soundtrack that the KD-55A1 suffers the occasional buzz or crackle of distortion, and betrays a slight lack of bass depth. 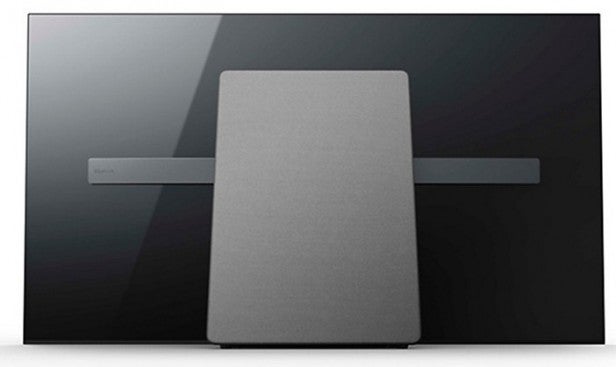 If you have £3500 to blow on a TV then the KD-55A1 does its level best to make itself irresistible. It looks a million dollars, delivers picture quality that’s predominantly beautiful – at least using its Standard preset – and even manages to make a debut success of its ground-breaking audio technology.

This TV isn’t bright enough to stand out as well in a bright room, or deliver HDR highlights with the same aggression that LCD TVs such as Sony’s own 55XE9305 or Samsung’s QE65Q9F can. In fact, brightness is one area where LG’s latest OLED TVs outperform the KD-55A1.

However, if you prefer a beautifully natural, rich, immersive image to the more ‘showy’ side of HDR, the KD-55A1 is perfectly equipped to blow your socks off.

While the KD-55A1 isn’t bright enough to be perfect, it adds enough of Sony’s picture quality and design sauce to OLED technology’s innate advantages to make it something of an instant classic.