This item’s predecessor, the Sony HX60 is currently on sale at Argos, meaning you could save £40. Check out our Black Friday deals for more savings, and get a deal on the Sony HX60 below:

The Cyber-shot DSC-HX90 is Sony’s latest travel compact. It offers an amazing 30x zoom range in a body that will easily slip into your pocket.

The HX90 looks and feels good too, and the inclusion of optical image stabilisation makes the zoom useful when shooting with the camera in the hand. For the most part the £320 Sony HX90 is a great little rival to the Panasonic TZ70, one of the most popular superzoom compacts of the moment.

However, if image quality in low light is your top priority then you should think twice. 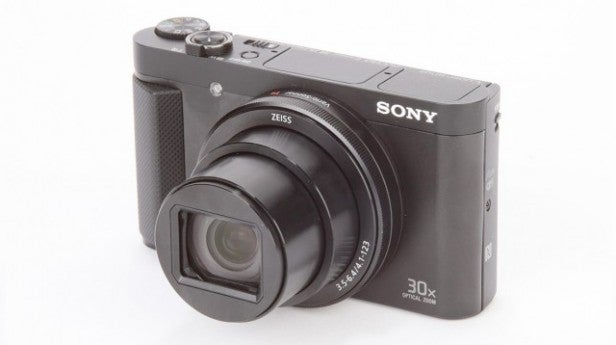 The HX90 has seen a radical change over previous models in Sony’s HX range. It’s quite a lot smaller than its predecessor, the Sony Cyber-shot DSC-HX60, instead looking more like the popular Sony RX100 IV. The HX90 is compact enough to easily fit into your pocket without filling it – which is a huge benefit for a travel camera.

It weighs only 245g with the battery and memory card in place. It’s so light, in fact, that it barely makes its presence felt. 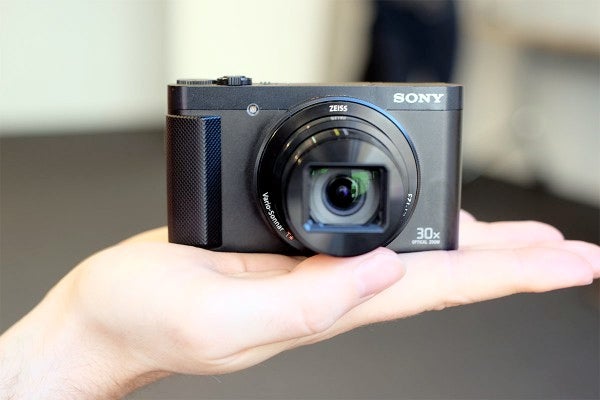 Despite its small size, the Sony HX90 still feels comfortable to hold: a hand grip protrudes from the front of the camera slightly. It isn’t in any way cumbersome.

Manual control is good and, once again, is fairly similar to that of the Sony RX100 series of cameras. The Sony HX90 has a control ring around the lens and a secondary manual dial on the rear. The lens ring is a smooth, electronic control rather than a click one, which may put off a few. As with the RX series, however, it does at least feel good.

Outer hardware is an area where the Sony HX90 actually loses out to its predecessor, though. There’s no hotshoe or exposure compensation dial, which pushes this model more towards the market for casual photographers. You can still control exposure using the camera’s menu system, of course, but the lack of hotshoe means you can’t attach accessories such as a more powerful flash or external mic. A basic integrated flash is included, though. 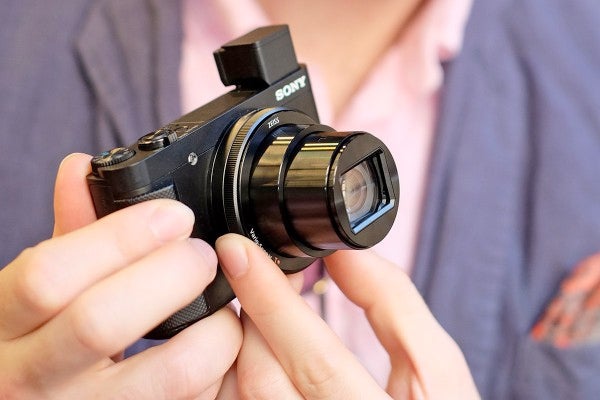 The key appeal of the Sony Cyber-shot DSC-HX90 is its lens. Its 30x zoom gives you the equivalent of 24-720mm in the 35mm standard, offering scope for wide landscape shots as well as closeups of wildlife. This is the same range available with the Panasonic TZ70, and it’s pretty much ready for anything.

Naturally, in some conditions you’ll need a tripod to make good use of the outer reaches of the zoom’s range, but the Sony HX90 does have 5-axis image stabilisation to ensure you don’t end up with blurry images as soon as the shutter speed slows down or the zoom extends. 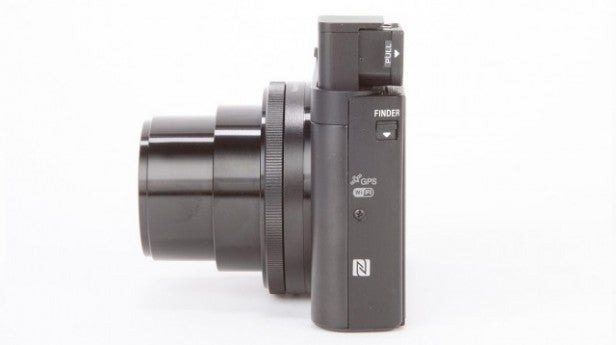 The Sony HX90’s lens doesn’t offer much to help maintain a fast shutter speed, though, with an unremarkable maximum aperture of f3.5-6.4. Once again, though, this is exactly what you get with the rival Panasonic TZ70, and it’s clear that here too an impressive amount of engineering has gone into making the lens this small.