What is the Sony HT-XT1?

For those unfamiliar, a soundbase is a flat speaker that designed to have your TV sit on top of it, offering powerful sound without adding clutter to your living room.

Sony steps into the soundbase arena with the HT-XT1, an impressive-looking model equipped with features and connections galore. It’s a market already inhabited by impressive soundbases like the Tannoy BaseStation One and Canton DM50, so let’s find out how Sony’s effort measures up. 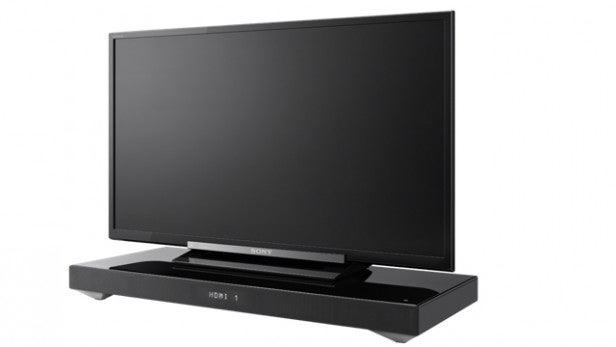 There isn’t much you can do with a flat black box but to its credit Sony has made the HT-XT1 look as dapper as possible. The gloss-black top and side panels and metal mesh bring a touch of class, while the silver pyramid feet are a lovely touch.
At 50mm high it’s also slimmer than some competitors, which could be helpful if your TV is housed in a shelf or alcove with limited headroom above it. It’s a minimal affair, aside from an LED panel on the front that displays inputs and volume levels in large bright digits (it can be dimmed).

It’s remarkably well made too, as solid and robust as you’d expect from something designed to support TVs up to 50in (weighing no more than 30kg).

The all-important top surface is covered in strengthened scratch-proof glass to withstand the rigours of a TV stand. Incorporated into the top panel are three touch-sensitive buttons – standby, input and Bluetooth pairing – and an NFC touch point.

Sony excels itself on the rear panel with a generous selection of sockets that puts even Tannoy and Canton’s soundbases to shame.

The three HDMI inputs let you feed a Blu-ray deck, games console and TV receiver into the HT-XT1, while the ARC-compatible HDMI output sends audio from a compatible TV to the Sony without having to rig up a separate cable – that’s useful when watching shows from the TV’s built-in tuner. The HDMI sockets even pass through 3D and 4K signals.

The HDMIs are joined by an optical digital input and a 3.5mm minijack that’ll come in handy if you want to temporarily rig up a phone or MP3 player – although there’s probably no need as built-in Bluetooth with NFC makes music streaming a cinch.

Sony’s soundbase is a 2.1-channel system with two built-in subwoofers and a bass reflex enclosure. Sony says the S-Master digital amplifier musters a power output of 170W, which breaks down as 2 x 35W plus 100W from the subwoofers.

There are built-in decoders for Dolby True HD and DTS HD Master Audio, which is something of a rarity among soundbases. Also on board is Sony’s S-Force Pro Front Surround, which is designed to deliver an immersive soundfield with a wide sweet spot.

The ‘Sound Field’ button on the remote toggles through a range of audio presets. Among them is the new ClearAudio mode, which automatically selects the optimum EQ settings for each source.

It’s joined by Standard, Movie, Sports, Game, Music and Portable Audio modes. A separate Voice mode emphasises speech in three levels, one of which boosts frequencies that the elderly find difficult to hear.

The HT-XT1’s excellent remote makes it a doddle to use. The thin, wand-like handset sports seven sloping buttons at the top, including input, volume and sound mode selection, but snaps open to reveal more buttons in the middle section. These include setup menu and subwoofer volume controls.

If you prefer to use your phone or tablet, the HT-XT1 is compatible with Sony’s new SongPal Bluetooth app for Android and iOS devices, which allows you to control the unit’s audio settings

The front LED display makes it easy to check inputs and volume levels, plus it plays host to a helpful setup menu where you can tweak the bass/treble, lip sync, auto volume, HDMI, Bluetooth and system settings.

The HT-XT1 attacks movie soundtracks with verve and vigour, delivering the sort of excitement missing from most TV speakers. It’s not always the most controlled or cohesive performer, but you can’t argue with the punch and power on offer.

Its bracing tone makes the action scenes in Thor: The Dark World on Blu-ray sound thrilling. During the battle scene at Vanaheim, the metallic clatter of colliding swords zings from the speakers, while lasers zap forcefully across the battlefield.

It’s nicely detailed too. There’s a crisp fizz as debris rains down after every big explosion, and you can make out the delicate crackle of fire in the silence following Thor’s destruction of the big stone warrior.

There is, however, some brashness to the mids and treble that can be hard on the eardrums, particularly with the volume cranked up. You can hear it in the ‘ching’ as Sif draws her sword and in the stone warrior’s roar.

Things gets even more strained when you activate Voice modes 2 and 3, which push midrange frequencies even harder. They do make dialogue more audible but also introduce too much sibilance for our liking.

Playing with the sound modes, we found the Standard setting to offer the most satisfying sonic balance. The effectiveness of ClearAudio is hard to discern.

Pleasingly, S-Force Pro Front Surround offers a wide soundstage and has no trouble filling a modestly-sized room. Effects are nicely placed and smoothly steered within the stereo soundfield.

The built-in subwoofers produce a weighty rumble, adding depth and punch when the scene demands it, but it could be tighter and better integrated. The bass thump sounds flabby and disconnected when Thor slams his hammer onto the ground. Again, you don’t get that from the Tannoy and Canton, both of which offer better cohesion and a bigger soundstage.

So overall the HT-XT1 is a loud and lively performer with some pleasing audio attributes, but its sound quality falls short of the best soundbases on the market. 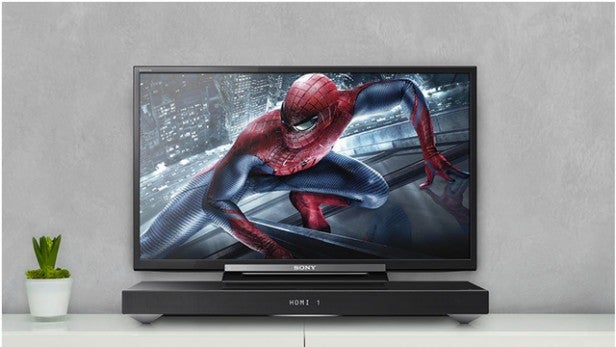 Should I buy the Sony HT-XT1?

The HT-XT1 is a superb soundbase in many ways, offering class-leading connections, tons of audio tech, generous features and fabulous build quality. If you prize these things above all else then you might think it £300 well spent.

However, the brash tone and flabby bass put a dent in our overall enjoyment, failing to match the high standards set by rivals like the Canton DM50/DM75 and the Tannoy BaseStation One.

Sony’s HT-XT1 is an attractive, well-made and feature-packed affair with a crisp, attacking sound, but sonic flaws deny it a place at the soundbase top table.

Next, check out our pick of the Best soundbar