Let’s cut to the chase: with the HT-X8500, Sony has produced its most entertaining, low-cost Dolby Atmos soundbar yet.

Sure, it’s an inclusive 2.1 design, with no up-firing speaker drivers or standalone subwoofer, but it uses ingenious DSP to deliver a soundstage that’s unmistakably cinematic.

It shouldn’t work. We should all scoff. But it does, so we won’t.

This modest box transpires to be more than a simple TV audio upgrade, priced at far less than a full-blown home theatre system. It’s a non-nonsense, plug-and-play soundbar that under promises and over delivers.

Most high-performance Atmos soundbars will do their best to hog table space, but you won’t need to make room for the HT-X8500. At just 89cm wide, it makes a good partner for screens from 49 inches upwards. It’s slim enough to sit in front of most of them, but can also be wall-mounted for convenience.

Simplicity is key to this soundbar’s appeal. There’s no convoluted setup, and neither is it fussy about where it’s positioned; it doesn’t rely on any room reflections to create an illusion of surround sound.

This is because the speaker configuration is primarily stereophonic. Despite the .1 appellation, there’s no separate subwoofer. Left and right mid-range drivers are located on both sides of an integrated dual driver subwoofer, which ports left and right. 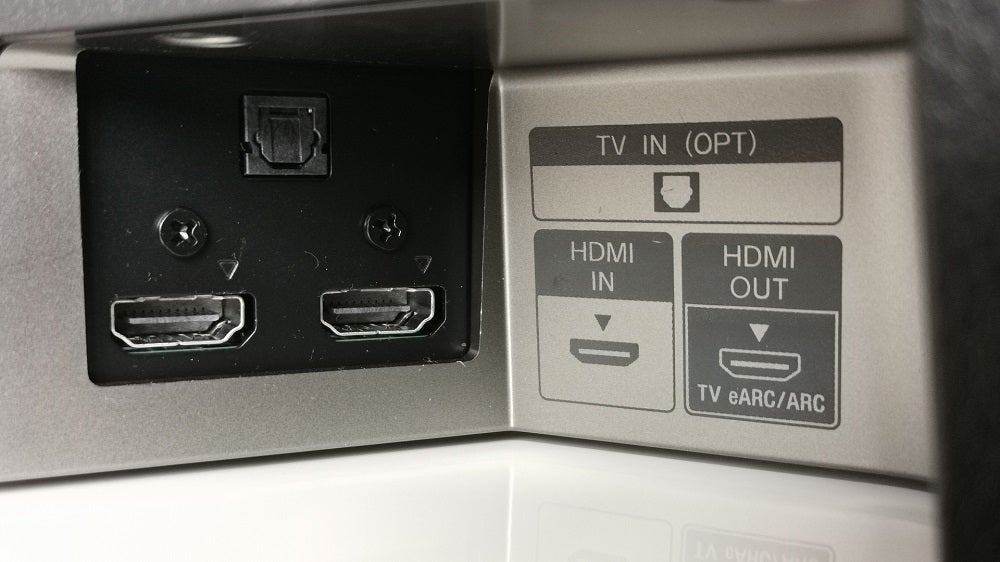 Cosmetic design is decor-friendly. The HT-X8500 is fronted by a smart rolled grille, distinguished with grey trim. Look closely and you’ll see the driver array behind the mesh. Connectivity is limited to two HDMIs, one of which is an output with eARC. Both are compatible with Dolby Vision, HDR10 and HLG sources. Up top are touch-sensitive buttons for power, input selection, volume and Bluetooth pairing.

If you want to avoid fingerprints, the soundbar comes with a slim remote zapper, festooned with buttons. 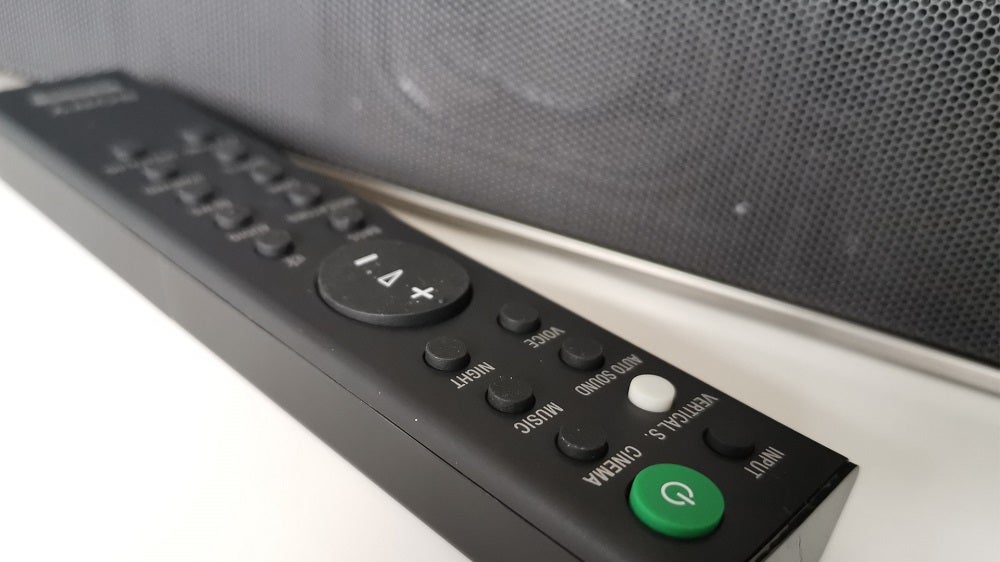 Codec compatibility covers both Dolby Atmos and DTS:X, with DTS Virtual:X included. Inevitably, there’s also a variety of sound modes: Standard, Auto Sound, Cinema, Music, News, Sports and Game. You won’t notice a great deal of difference between most of them, but Music and Cinema hit the right tone. The Game mode is also interesting in that it’s been fine-tuned with help from the Sony PlayStation group.

As you might imagine, there’s no elaborate display or UI. Instead, a line of six LED lights point to source and audio format.

If you’re hoping for smart connectivity, look elsewhere – there isn’t any. Wireless support is restricted to Bluetooth. Of course, if you want to add Wi-Fi functionality then a Chromecast dongle will do the job.

Very quickly, the HT-X8500 demonstrates an ability to cast images high and wide. It also plays reassuringly loud. With a quoted power output of 320W, the bar’s power plant is dynamic and gutsy. We never felt the need to go all out; it’s comfortably loud enough for the average living room.

Rather optimistically, Sony suggests that its performance is equivalent to a Dolby Atmos 7.1.2 system. We wouldn’t go that far, but it does sound authentically filmic.

We first encountered Sony’s Vertical Surround Engine on the HT-ZF9, but here the proposition has been simplified somewhat, but actually ends up being more convincing. 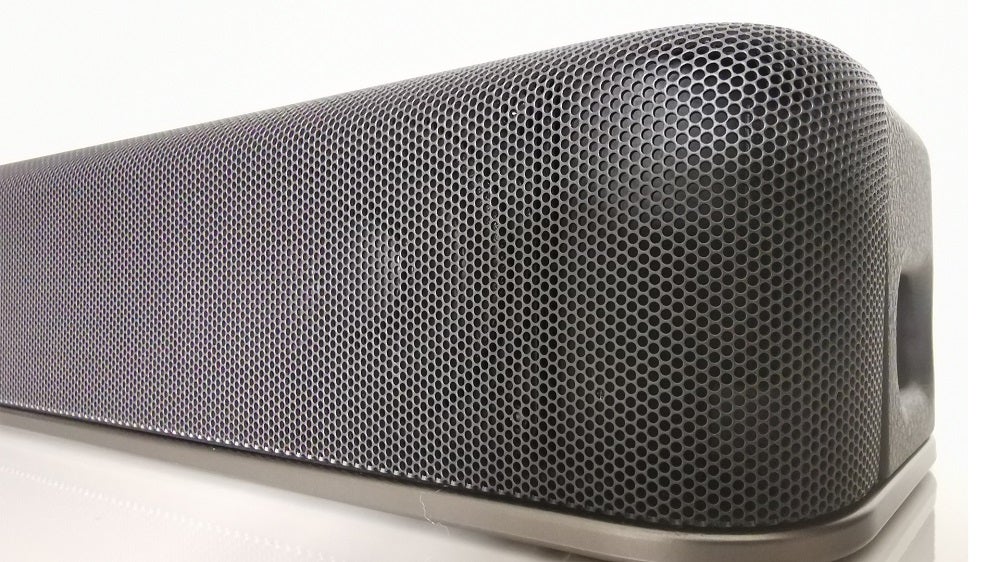 Obviously, this DSP trickery doesn’t just work on native immersive audio. It will also work processing magic on Dolby TrueHD, regular 5.1 and two-channel – everything that goes in, comes out wider and taller.

But let’s manage some expectations. What you don’t get is a sense of overhead sound steerage. This bar can’t mimic what’s achievable with a full-blown AV receiver and a forest of dedicated speakers – but then very few soundbars can, and certainly none do at this price point.

What you do get is a soundstage that positively looms, occasionally wrapping left and right. Every so often you’ll get a sense that there’s some steerage left and right, and the effect is appropriately satisfying.

Be aware, though, that Vertical S processing has a very definite sweet spot. Its wraparound effects are at their most pronounced when you’re sitting square-on. Slope to the side and you won’t hear quite such an obvious effect. This might be a concern in a family viewing environment.

The HT-X8500 also sounds fulsome. We measured bass down to 50Hz, which isn’t bone-crunching, but there’s enough mid-range rough and tumble to enliven the average Gerard Butler action movie. 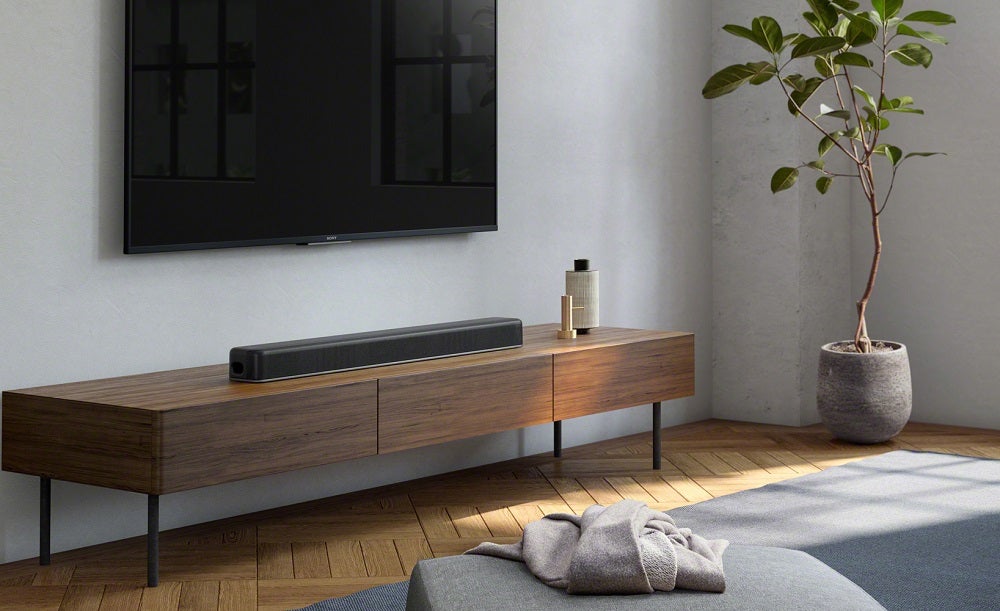 It’s toppy, too. The water planet landing (Interstellar, Blu-ray, Dolby TrueHD) is intense. Our heroes’ clattering re-entry through the alien atmosphere will rattle your teeth. When they splashdown, water laps left and right, while a clock seemingly ticks life away. Similarly, the hunt sequence that opens Dawn of the Planet of the Apes (Blu-ray DTS:X), where Caesar’s tribe bores down on a herd of deer, is completely engulfing.

While the HT-X8500 is very much a home cinema proposition, it does an entertaining job with music too. Spinning Imagine Dragon’s Shots, from Smoke + Mirrors Live (Blu-ray DTS:X), the Sony paints with a joyous sense of rhythm. In Music mode, the vocals are protected from the sometimes ribald bass, but the guitars dance to great effect.

This affordable all-in-one delivers popcorn fun by the bucket-load, all without up-firing speakers or floor-stealing subwoofer. You might even say it’s a sound bar-gain.

Sony’s HT-X8500 doesn’t just offer brilliant value for money; it also brings the multiplex home in a way few will find difficult to live with.

It may only be a 2.1 channel system, but the impact of Sony’s inventive DSP post-processing is genuinely impressive.

The HT-X8500 is pretty much plug and play. Great for those who aren’t home cinema boffins.

There’s a very definite sweet spot with this soundbar. Budge from it and the performance won’t be quite the same.

There’s no upfiring speakers with the X8500, so the performance on tap isn’t true Atmos…