The shine seems to have gone off 3D a little over the last six months, but that’s partly because of its ubiquity. Every TV above the budget level appears to have the capability, and every movie release a 3D edition – for a few pounds extra per ticket. Camcorders offering 3D are still at quite a premium, however. This is particularly the case with Sony’s HDR-TD20VE, which costs a lot but lacks few features.

The HDR-TD20VE is rare, like the JVC Everio GS-TD1, in that it is built for 3D from the ground up. Instead of requiring any kind of 3D accessory, as with Panasonic’s 3D-capable models such as the HC-X900, the TD20VE can shoot 3D whenever you like – simply flip a switch on the rear. The TD20VE incorporates two identical lens paths leading to two identical CMOS sensors, each 1/3.9in in size with 5.4Mpixels apiece and sporting Exmor R technology. This is Sony’s equivalent of back-side illumination, which gives sensors greater light-sensitivity for improved image quality, particularly in low light. 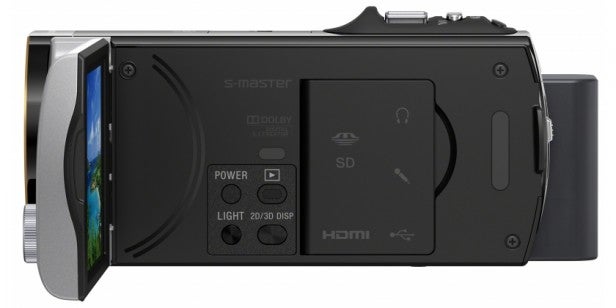 Another welcome feature for a 3D camcorder is the use of the AVCHD 2.0 recording format. This second iteration of the most widely used HD camcorder file type adds native support for 50p, data rates up to 28Mbits/sec, and MVC. The latter records 3D as interleaved streams of frames, so each one has the full resolution. Essentially, this means the TD20VE records two streams of 25p Full HD, one for each eye, and alternates them to form a 50p stream. Software that supports AVCHD 2.0 will decode and separate the streams so you can view the 3D image; software that only supports AVCHD 1.0 sees just one stream and one eye’s view. Footage is captured to the healthy 64GB complement of on-board storage, but on the offchance this isn’t enough, there’s a dual-format memory card slot capable of accommodating either MemoryStick or SD media.

A further benefit of the twin lens paths is that the TD20VE can offer a
decent optical zoom in either 2D or 3D mode. The base factor is 10x, but
an Extended option boosts this to 17x in 2D mode and 12x in 3D mode.
This uses extra pixels on the sensor to provide an electronic tele
conversion which doesn’t involve the loss of resolution normally
associated with digital zooms. Image stabilisation is optical, too, as
you would expect at this price, and it has a more powerful Active mode.
This works across the zoom range in 2D mode, but only when zoomed out in
3D mode. 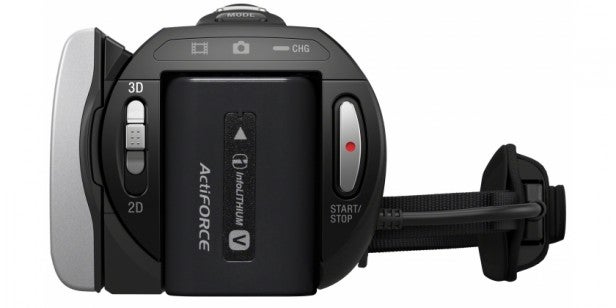 There’s
a host of manual settings available, when you delve into the menus
within the touchscreen. However, the leading feature for the enthusiast
is a little knob near the lens. By default, this adjusts the depth of
the 3D effect (also known as convergence), which is a key capability if
you’re serious about your three dimensions. But it can also be set to
adjust manual focus, exposure, iris, shutter speed, AE shift, or white
balance shift. It’s not as ergonomic as a full lens ring, but far more
effective than using fiddly touchscreen sliders. It’s also worth noting
that direct shutter speed adjustment hasn’t traditionally been available
on many Sony camcorders, so it’s great to see this as an option,
although it would be even better to be able to switch the knob between
functions rapidly using a mode button, as is possible with the lens ring
on Panasonic’s top models.

As
if the 3D shooting wasn’t enough, the TD20VE also incorporates a
built-in GPS. If you’re shooting in a location where a signal is
available, the location will be recorded alongside the footage. So you
can browse your clips by where they were shot in the world, as well as
by date or in sequential order. The TD20VE also sports the requisite
connections for enthusiast videomakers. There’s a minijack for an
external microphone and headphones. However, the accessory shoe is
Sony’s proprietary version, so you will need to buy Sony’s own
peripherals or invest in an adapter. 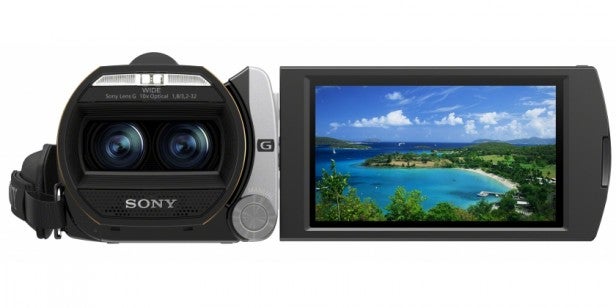 There are a couple of novel shooting modes, as well. The Smooth Slow
Record function has been a mainstay of Sony HD camcorders for some years
now, allowing you to grab high-speed footage at a lower resolution to
high definition, then play it back at the regular frame rate for a fluid
slow motion. But more novel is the Golf Shot. When in this mode, you
can trigger recording as a golf swing or other sporting stroke hits its
target, and the camcorder will actually record the split second
beforehand, to compensate for most people’s slow reactions. What it
actually records is a string of tall skinny still images in succession,
which are played across the frame in two rows, so the whole motion is
visible at once in a modern take on Muybridge. This function has a very
specific use for analysing sporting form, but could be beneficial if you
do want a detailed view of motion. 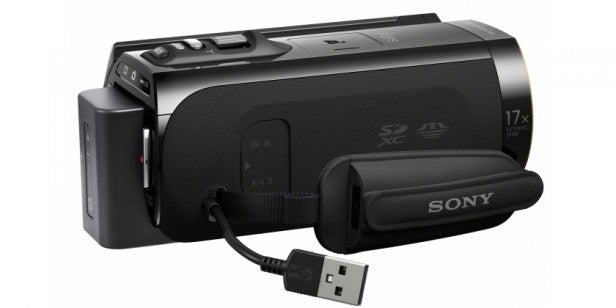 Although
the TD20VE doesn’t use sensors quite as large as Sony’s top 2D-only
camcorders, it’s still capable of excellent image quality in either 2D
or 3D mode. As is typical of Sony camcorders, colours are particularly
vibrant and detail is excellent. The 3D effect can be quite effective,
too, and the LCD screen is one of the best glassless 3D displays we’ve
seen on a camcorder. The most impressive performance is in poor
illumination in 3D mode, however. Camcorders which record side-by-side
images onto a single CMOS tend to exhibit significantly inferior image
quality in low light. But the TD20VE’s footage maintains impressive
levels of brightness and colour, with very little sign of grain. There’s
actually no noticeable difference between 2D and 3D low light
performance.

Verdict
The Sony HDR-TD20VE shoots
great video in 2D or 3D, and is packed with enthusiast capabilities. It
lacks a couple of important features, in particular a full lens ring and
standard accessory shoe, which would make it the perfect enthusiast 3D
camcorder. It’s also relatively expensive, at close to £1,200 from the
cheapest stores we found, and more from most retailers. But this is
still a great camcorder, if ultimate value isn’t your chief concern.