Sony has been leading the pack in the rapidly growing high-definition camcorder market, particularly in Europe. The company was the first to bring HDV to the UK, the first to bring HDV down to the £1,000 price point, and the first to launch products using the MPEG-4-based AVCHD format. So the HDR-SR8E joins a burgeoning Sony range with no less than four different product categories. Sony is clearly hedging its bets by continuing to support HDV while also offering models using optical disc, MemoryStick and hard disk. The SR8E opts for the latter and is the new flagship in this area. 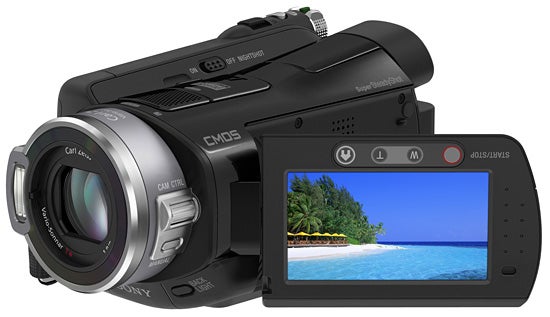 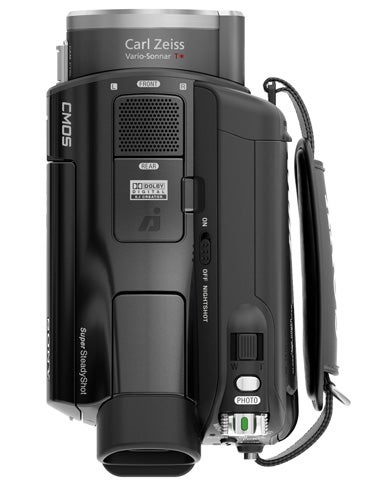 However, the SR8E has all this in common with the SR7E. What the latter doesn’t offer is the SR8E’s massive 100GB hard disk – it opts for 60GB instead. So the SR8E has room for 13.5 hours of video even in the top HD XP mode, which operates at 15Mbits/sec, where the SR7E only offers around 8 hours. If you’re satisfied with 7Mbits/sec, you can squeeze 30 hours of video onto the SR8E’s hard disk, although we found the reduction in quality was noticeable. 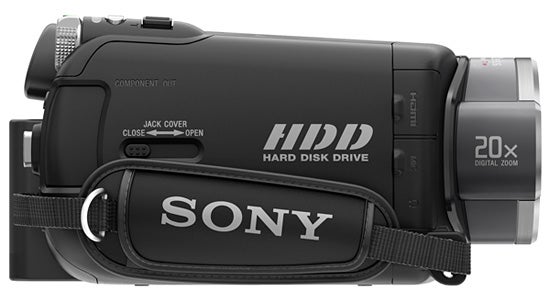 The SR8E has a fair level of high-end features. The built-in lens cover opens automatically when the camera is turned on. The accessory shoe is of course Sony’s propriety version, so third-party accessories won’t fit. This is a shame, as minijacks are built in for microphone and headphones. But the accessory shoe also supports Sony’s 5.1 surround microphone, the ECM-HQP1, assuming you can find one for sale. If you can’t, the built-in microphone has three channels – left, right and rear – which it uses to mix the surround signal it records to Dolby Digital 5.1.

No manual focus ring is available, but a discrete button and control wheel provide similar functionality almost as well. There’s a separate button for toggling backlight compensation, and a switch for nightshot mode (using a built-in infrared lamp), but the remaining manual features are only accessible through the touchscreen. This offers yet another method of manually focusing, plus the spot focus system where you simply touch the point on the LCD preview you want in focus. Similarly, exposure can be configured manually or via spot metering using the touchscreen. Unlike Sony’s cheaper models, the SR8E also offers AE shift, which keeps autoexposure on but biases it in the direction you dictate. 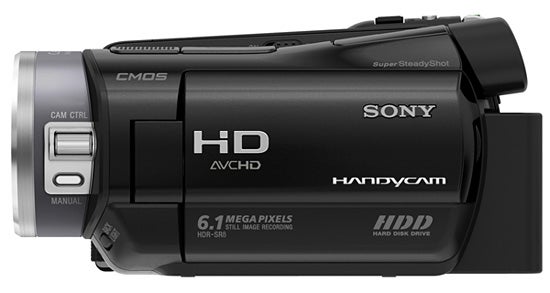 Ten Scene modes are available, including Twilight, Twilight Portrait, Candle, Sunrise & Sunset, Fireworks, Landscape, Portrait, Spotlight, Beach and Snow. White balancing options include indoor and outdoor presets plus manual. You can also use White Balance Shift to subtly create warmer or colder tones. There are a couple more low-light modes available via the touchscreen as well. Colour Slow Shutter simply reduces the shutter speed, and Super Nightshot combines a slow shutter with the infrared Nightshot mode. There is a selection of digital effects, including old movie, but conspicuous by its absence is any fully manual control over shutter speed. 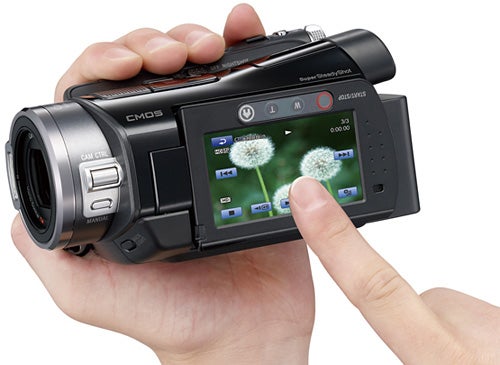 One feature not found in the standard configuration menu is Smooth Slow Record. This records at four times the frame rate, so when the video is played back at the usual speed you get extremely smooth slow motion. However, whilst the results can be very impressive, we found its use seriously affected light sensitivity, presumably because of the shutter speed required – so it’s practically unusable unless you have really bright illumination. 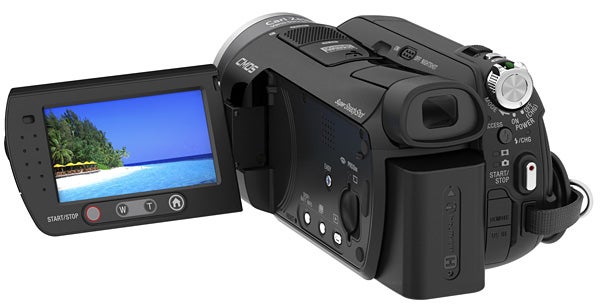 Connectivity options are comprehensive, too, including HDMI and component for attaching to HDTVs, plus A/V with composite and S-Video plus RCA audio for regular TVs. All of these are output only, however, so you won’t be able to dub analogue sources to AVCHD. The HDMI connection is also a proprietary small socket, and no adapter is supplied. The requisite Sony cable accessory is £29 inc VAT.

In good lighting, such as bright sunlight, the SR8E’s x.v.Color technology accentuates Sony’s already excellent colour saturation. However, quite a bit of noise is evident compared to HDV, since AVCHD’s MPEG-4 H.264 AVC compression is more aggressive than the HDV’s MPEG-2. The image quality is still excellent, but the same footage from a similarly specified HDV camcorder would be superior. 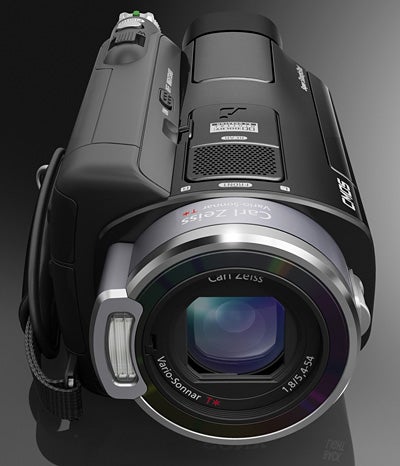 Sadly, although the higher pixel count of the SR8E’s 3.2 Mpixel CMOS pays dividends for still images, it does have a slight drawback for video. The pixels themselves will be smaller than a similarly sized sensor with fewer pixels – such as that used by the HDR-HC3 or HC1. We expected this to have a detrimental effect on low-light performance, and our expectations proved correct. We noticed a similar problem with the DCR-SR72E, although in this case a small Megapixel sensor is the culprit. 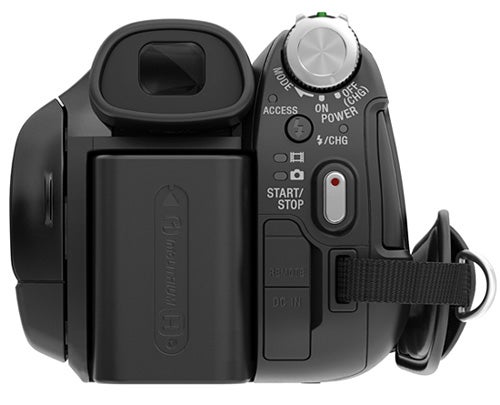 With fairly standard indoor lighting, colour remains well saturated, with plenty of detail. But in gloomier conditions, quite a bit of noise is evident and the colour is very washed out. Compared to footage from the HC3E, the SR8E fares slightly worse in these conditions. Few single-chip camcorders excel, but Canon’s HV20, for example, is in a different league.

When it’s time to edit, the Handycam Station is required, as no USB connection is available on the camcorder body itself. The SR8E then shows up on a PC as a removable hard disk. The Handycam Station also provides additional component and A/V connectivity, so you can leave the station hooked up and simply slot the SR8E on to watch and edit your video. Since AVCHD is now supported by more editing apps, editing the files is less of an issue, although Premiere Elements still hasn’t joined the club. We tried Ulead VideoStudio 10 Plus, though, and found now problems.


When AVCHD first arrived, it was hard to recommend the format to anyone but incurable gadget lovers. Even though it is now more widely compatible with editing software, AVCHD’s inferior image quality to HDV precludes it from being the right choice for anyone with more serious intentions than merely capturing a few family moments. But assuming AVCHD is the nascent consumer video format for the high definition era – and it’s fast becoming so – then Sony’s HDR-SR8E provides the most accomplished implementation of it we’ve seen. The low light abilities are a disappointment, but with its 100GB storage, decent still images and comprehensive feature set, the SR8E is the best hard-disk AVCHD camcorder yet, and the high price seems fairly reasonable for such a capable piece of kit.