There’s a famous Saturday Night Live sketch about a new product which is both a floor cleaner as well as a dessert topping, and at very first glance you might think that combining a camcorder and a projector seems like a similar, if slightly less extreme ‘jack of all trades’ situation. Fortunately, Sony’s HDR-PJ10E doesn’t fall into this trap. It is the first consumer camcorder of its kind, but the concept has great pedigree in the early days of film, as 19th century innovators the Lumiere Brothers’ first camera also doubled as a projector.
The camcorder side of things is decidedly mid-range, however. The optics feed into a single 1/4in CMOS with 4.2Mpixels. This is not as big as Sony’s top-end models offer, but it still incorporates Exmor R technology, so has a back-side illuminated construction which lets in more light than the traditional configuration. Also on the plus side, the smallish sensor means the PJ10 can offer a very healthy 30x optical zoom, despite its relatively compact form. This can be further increased to 42x in Extended mode, which doesn’t entail the quality loss associated with traditional digital zooms, although there’s a 350x version of the latter also available if you like pixellated images.
A number of recording modes are on offer, ranging from Full HD at 50 progressive frames per second down to standard defnition with a 50i interlaced signal. In between can be found some anamorphic HD options, and even the ability to shoot MPEG-2 PS standard definition, at a healthy 9Mbits/sec, if you need high-quality non-HD. Regular 50i AVCHD can be recorded at up 24Mbits/sec, with Full HD 50p available at 28Mbits/sec. The PJ10 has 16GB of Flash memory built in, which is enough for 75 minutes of footage at the top 28Mbits/sec setting. If you want more storage, Sony has hedged its bets and offers a slot compatible with both MemoryStick Pro DUO and SD. This supports SDXC, too, so can accommodate cards up to 128GB in capacity, and beyond when they become available

This is definitely not a camcorder aimed at enthusiasts, though. Sony has added an Intelligent Auto function which is broadly similar to the system of the same name Panasonic has included in its consumer models for a number of years now. This detects conditions and sets scene modes accordingly. You can also set these manually, and there’s a touch focus and exposure system which is operated via the touchscreen LCD. However, other than manual control over exposure, there is no facility to directly control shutter or iris settings. You do at least get both microphone and headphone minijacks for manual control over audio recording quality, and the built-in microphone includes a wind-cut setting. 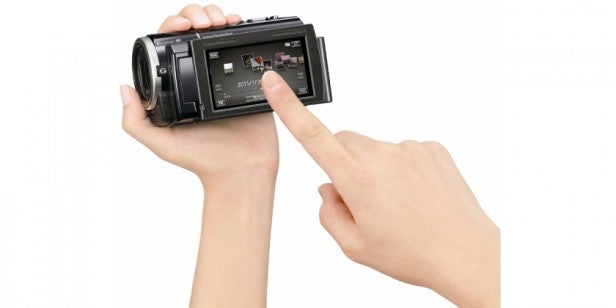 In image quality terms, the PJ10 is a midrange camcorder. It picks up vibrant colour, as with most other Sony models, which tend to saturate strongly. In good lighting the picture quality is very commendable, and the PJ10 shows its pedigree with its ability to handle contrasts in brightness. Best of all, low light performance benefits greatly from Exmor R. The PJ10 shoots grain-free footage with a decent amount of colour to impressively low levels of illumination. There is a slight lack of detail in the PJ10’s footage in general compared to higher-end models, but in low light it’s definitely one of the top in its class. 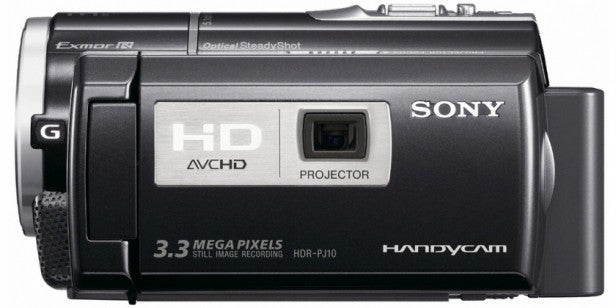 Of course, the projection facility is the PJ10’s most unique feature, and it’s more effective than you might expect. The projector is built into the reverse side of the LCD. This a LED pico projector, so it’s not bright enough to fill a large area of wall in daylight conditions. But in a darkened room you can throw an image up to 3m. Sony has made the projector supremely easy to use. Simply press a button on the side of the unit, and instructions appear on the LCD. You can then enter projection mode, using the zoom rocker to navigate menus and the photo button to make selections. There’s a slider on the top for adjusting focus, but no more advanced controls for functions like keystone. So although you can point the beam upwards using the LCD’s hinge, your picture will be wonky.

However, the experience is still pretty effective considering this is a projector in a camcorder. The picture can be up to 60in diagonally, and the audio is also considerably louder than most camcorders are capable of. So you can enjoy the video you have shot in a darkened living room with considerable ease. If you’re on holiday or just returned from an event, you can relive the moments immediately. This isn’t something you would use every time you’ve shot video, and the resolution is only 640 x 360 so you’re not experiencing your footage in all its HD glory. But this is definitely much more than just a gimmick. 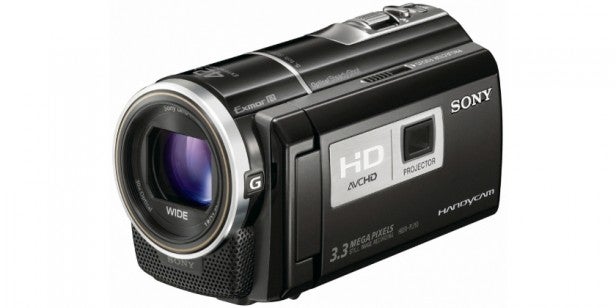 Strangely, Sony has also taken a leaf out of the pocket Internet camcorder phenomenon and built a USB plug with a short cable into the PJ10 itself. This nestles inside the hand strap, out of the way, until required. In tandem with the USB plug, there’s the usual software built in for uploading files directly to the Web. This supports Sony’s Personal Space, YouTube (naturally), Dailymotion, Facebook for both photos and video, Flickr and Picasa, which is a pretty comprehensive selection except that it excludes Vimeo. 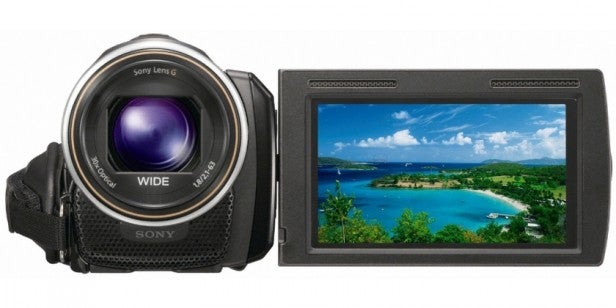 Like so many multi-function devices, one function tends to dominate Sony’s HDR-PJ10. Not surprisingly, you will most likely use it as a camcorder many times more often than you will as a projector. It’s also a bit expensive when decent HD camcorders like the Panasonic HDC-SD80 and the JVC Everio GZ-HM445 are now available for £300 or less. But at least it does a respectable job as a projector, so you will be able to make use of this feature when the opportunity arrises. Whilst it’s definitely more dessert topping than floor cleaner, the PJ10 can perform its secondary function well enough for this to be worth having.