Sony seems intent on dominating the High Definition camcorder market before any other company has even joined in. Although Canon has released a competitor to Sony’s top-of-the-range professional HVR-Z1 (the Canon XL-H1), there’s nothing at all to compete with Sony’s offerings below that in the UK. We thought Sony’s first attempt at consumer HD was pretty stunning (see HDR-HC1E review ). But scarcely six months later, Sony is upping the ante once again, this time breaking below the magical £1,000 barrier – well below. So what has been removed to get the new HDR-HC3E’s price nearly £300 lower than its predecessor? 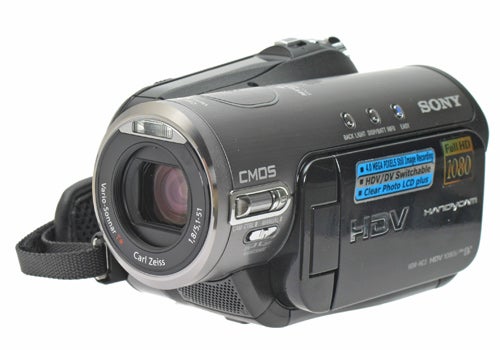 The HDR-HC3E is considerably different in appearance to the HC1E. It’s a lot more compact, and weighs 600g, which is 180g less. The image sensor at its core is different too. Although it’s still a 1/3in CMOS rather than the more usual CCD found in camcorders, the gross pixel count has dropped from the 2.97Mpixels in the HC1E to 2.1Mpixels. That’s still more than enough for full-resolution HDV, which has a resolution of 1,440 x 1,080 so only requires about 1.56Mpixels. Despite the lower-resolution CMOS, Sony is actually claiming 4Mpixel stills quality, which clearly uses a hefty amount of interpolation. These stills are captured to MemoryStick Duo, although none is supplied in the box. But more on that later.


The HC3E has lost most of the HC1E’s prosumer-oriented features as well. Where the latter offered microphone and headphone minijacks, for external audio sources and sound quality monitoring, the HC3E has neither. It does still have an accessory shoe, but like the HC1E this is of the Sony proprietary ‘Active Interface’ variety. So only Sony-branded video lights and microphones can be attached. All of its AV connections bar FireWire are output only, but you do get quite a selection. Proprietary connections provide composite, S-video and audio AV in one, plus a second socket for analog component. A USB plug can be found under the LCD for downloading still images or using the HC3E as a tremendously expensive webcam. 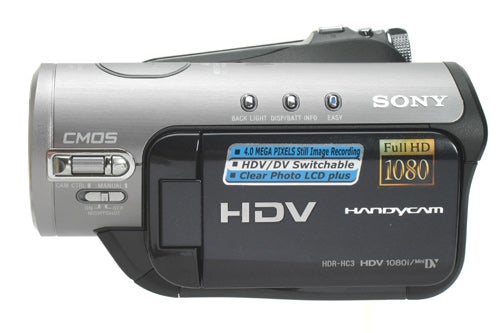 But the HC3E has one entirely new connectivity trick up its sleeve, or rather under a plastic flap. This is the first HDV camcorder ever to incorporate the consumer digital AV connection, HDMI. This will allow you to connect the HC3E to your HD Ready TV or projector using a digital link, and is also backwards compatible with DVI using the appropriate adapter. We hooked the HC3E to a DiBoss 40in HDTV and an Optoma HD72i projector, with stunning results in both cases.

The HC3E’s lack of prosumer features also extends to the control system. There’s no separate button for exposure, although this can be varied using the touch-screen LCD’s menu system. This also gives access to the handy spot metering and spot focus capabilities, where you can choose a point in the visible frame to use as reference and let the camcorder set its focus or exposure accordingly. But there’s no direct access to shutter speed, other than via the Program AE modes, which include the usual portrait, beach & ski, landscape, spotlight and sunset & moon. 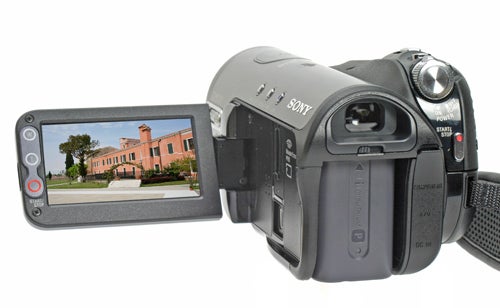 On the plus side, you get a tidy built-in iris instead of a lens cap, which opens automatically when you enter record mode. The 2.7in LCD offers 211,000 pixels, which is a vast improvement on the HC1E’s 123,000 pixel unit. Manual focusing is also readily available at the push of a switch, although this uses a thumb wheel rather than the more user-friendly lens ring. Another feature we had enormous fun with was Smooth Slow Record, which buffers three seconds of video recorded at four times the usual frame rate, then records it to tape at the usual rate to make 12 seconds of footage. The result is ultra-smooth slow motion for things like sports highlights, which only professional cameras like Sony’s Varicam could improve upon.


The HDV format used by the HC3E records interlaced video at 1,440 x 1,080 in MPEG2 format to the same tape as regular digital camcorders. So resolution is already nearly four times that of DV’s 720 x 576, if not quite as high as the full 1,920 x 1,080 HDTV broadcast by Telewest and Sky HD services. This makes for much sharper images than any DV camcorder can achieve, even three-CCD models. You can also shoot standard DV with the HC3E, as with other HDV camcorders. But there isn’t much point spending the premium in that case. 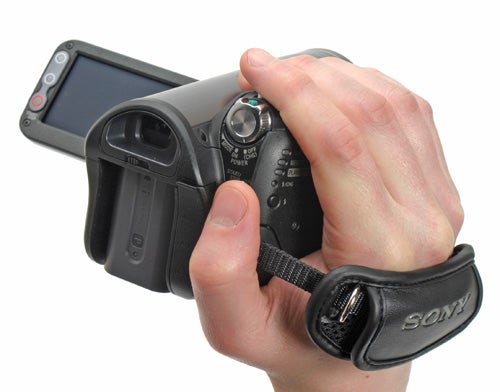 Although HC3E sports a lower-resolution CMOS than its HC1E predecessor, we weren’t expecting this to have a noticeable effect on video quality, as the extra pixels are only used when capturing stills. At 1/3in, this is still a large sensor so should offer good colour fidelity and low light characteristics. In good lighting, we found the HC3E’s image a little more saturated than the HC1E, but not necessarily inferior in quality, just a different emphasis. However, we did notice a little more stair-stepping along diagonal lines. This could be the result of greater sharpening, which is often found in camcorders aimed more at consumers than semi-professionals.

In lower light, the HC3E still managed excellent video performance. Colour balance was particularly good, although there was some evenly distributed noise across the image. Again, the quality compared very well with the HC1E, and only semi-professional three-chip HDV camcorders such as the HVR-Z1 or HDR-FX1 would achieve better. Under poor illumination, the HC3E marginally outperformed the HC1E, maintaining slightly better colour and less overall noise. So we’d say that Sony’s lower cost HDV newcomer actually offers better video quality than its predecessor, despite the less professional orientation. 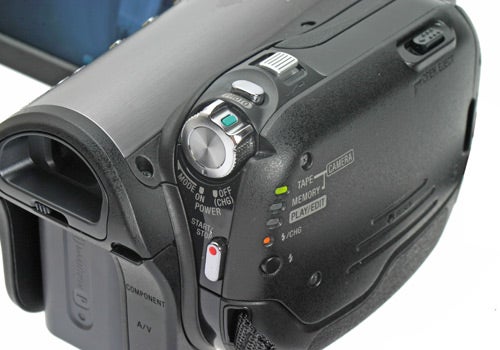 As a still image camera, however, the HC3E wasn’t so outstanding. The maximum resolution is 2,304 x 1,728, nearly twice as many pixels as can actually be found on the CMOS. At this resolution, we found images darker than the lower resolution shots possible with the HC1E. We have seen better camcorder stills from the likes of Panasonic’s NV-GS400B or JVC’s Everio MC500, too. The HC3E also offers a featured called Dual Rec, which allows you to grab images to memory at the same time as shooting video, without any noticeable glitches in either. However, the resolution is limited to 2Mpixels in this mode, so it’s even more for occasional use than the fully fledged still image capabilities. 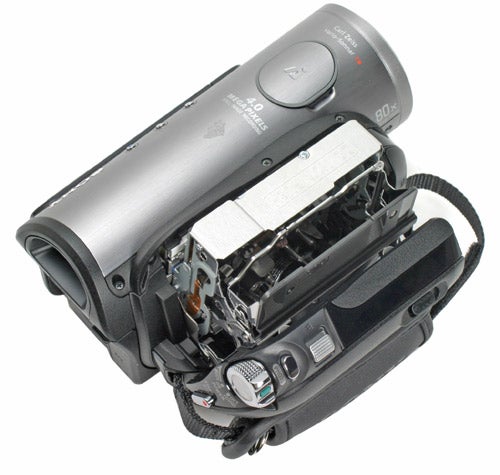 
If you’ve used the HDR-HC1E or Sony’s more professional HDV models for any length of time, you can’t help feeling disappointed by the HDR-HC3E’s lack of prosumer features. All that video quality, with so little user control. But then there’s the price. With some e-tailers already listing this model for £800, HDV has clearly arrived in the mainstream, albeit the high-end thereof. We can’t recommend the HDR-HC3E to semi-professional filmmakers – the much more expensive HVR-A1E based on the HC1E is the most cost effective choice here, or grab the latter while you still can. But if you’re an early-adopting consumer looking to capture family moments and holidays in stunning HD video, the HDR-HC3E’s superb image quality, price and portability make it the ultimate point-and-shoot camcorder. 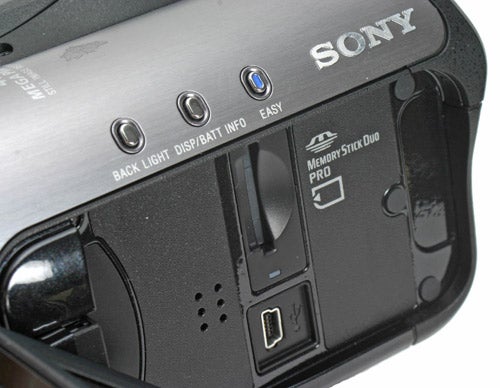