Sony appears to be distancing its consumer and professional ranges more and more these days. Its sub-£1,000 models are losing features which might appeal to the semi-professional, allowing Canon to sneak in behind its back and produce the best HDV camcorder for serious enthusiasts on a tight budget – the HV20. 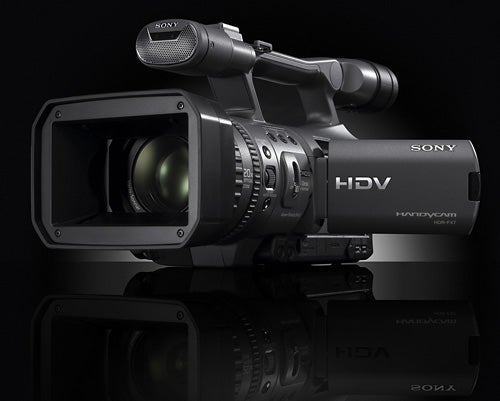 But Sony is still taking the slightly curious strategy of releasing two versions of its highest-end models – one for rich consumers, and one for true professionals. In the days of DV, the ‘prosumer’ VX range had its professional PD counterparts, and when HDV arrived, the prosumer HDR-FX1E was rapidly mirrored by the fully professional HVR-Z1. Likewise, the pro-grade HVR-V1 has its cheaper HDR-FX7 doppelganger, and recently we’ve noticed the latter has become available from some vendors for as little as £1,500. But it’s still around three times the price of the HV20. So what do you get for the extra money, and how does it compare to the HDR-FX1E, which was the first HDV camcorder to hit the market in the UK? 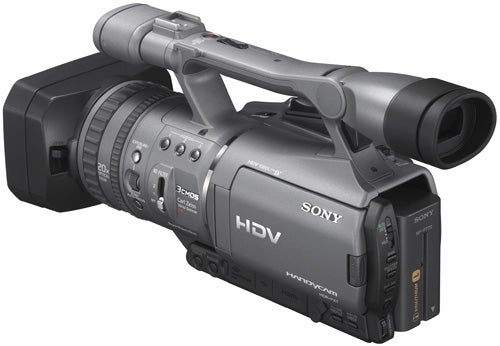 But three decently-sized sensors are still the hallmark of a quality camcorder, and Sony’s HDR-FX7E is no exception. Except that the FX7E sports three CMOSes instead of CCDs. Each one is 1/4in with 1.1-megapixels, which are actually smaller than the trio of 1/3in CCDs in its FX1E predecessor. This, in theory, will mean inferior low-light performance. But CMOSes do have their advantages – lower power consumption, and true progressive scanning, where video CCDs provide an interlaced signal.


The FX7E still records to regular tape-based HDV, using the usual 1,440 x 1,080 resolution with interlaced fields. Whereas the professional HVR-V1E version of this camcorder can take advantage of the CMOS’s progressive recording mode, this feature isn’t available on the FX7E. But one of the biggest differences between the two models is the audio provision. The FX7E offers minijacks for microphone and headphone, plus a standard accessory shoe. But the HVR-V1E provides XLR inputs, which are a must for connecting up professional audio gear (see our tutorial on video sound).

The FX7E is about half a kilo lighter than its FX1E predecessor, but at around 1.5kg it’s still much larger than a consumer camcorder. However, this is a very nice middle ground. If you’re lugging the thing round all day you want it to be light as possible. But it’s a proven fact that paying clients – and the people you interview – react better to a camcorder which ‘looks professional’. The FX7E still satisfies this need, but comes in much lighter than most camcorders in its class, except Sony’s own HVR-A1E.


The FX7E has a full complement of manual controls. There are not one but two lens rings – one for focusing, and another for operating the capacious 20x optical zoom, which is a huge step up from the 12x provided by the FX1E. The FX7E isn’t entirely brimming with buttons, though, unlike some professionally-oriented camcorders. For example, manual audio levels don’t have their own dials as they do on high-end Canon camcorders. But there are still plenty of discrete controls. 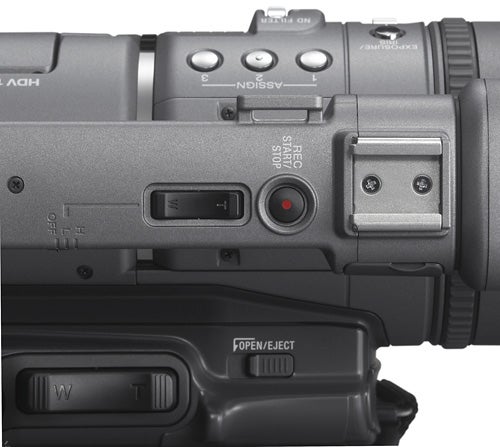 On the camera body near the lens is a button and wheel combo for controlling iris, exposure, or AE shift – you have to choose which via the menu. In iris mode, you can select apertures from F/1.6 to F/11, and this can either function independently of shutter speed or in aperture priority mode, where the shutter speed adjusts automatically to compensate. Next to this control are three buttons, the function of which can be assigned via the menu. Another nearby switch can also engage two levels of Neutral Density filter, which reduce the amount of light passing through the lens – useful if you want to use a wider aperture in bright light for a narrower depth of field. 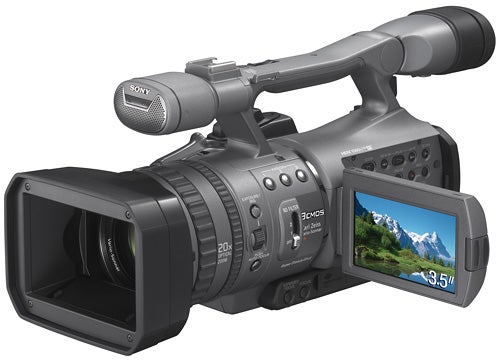 Three more assignable buttons can be found under the LCD panel on the side. Instead of the program auto-exposure modes familiar with consumer camcorders, the FX7E offers Picture Profiles, which are presets for colour level, colour phase, sharpness, skin tone detail, white balance shift and cinematone gamma. Four standard presets are included – portrait, cinema, sunset and monotone – and you can create two of your own. The button for the Picture Profiles is found underneath the LCD. 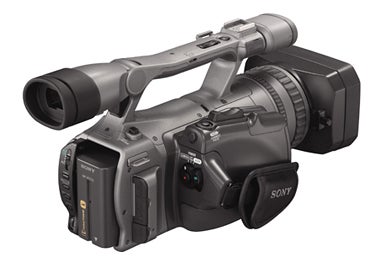 Finally, on the rear of the camera can be found a few more buttons for gain, white balance and shutter speed, plus a jog wheel which controls the settings of each when selected. The shutter speed can be varied from ¼ to 1/10,000, and gain up to +18dB in 3dB increments. A button for calling up the full menu can also be found on the rear. Although this is a well organised menu system, some cameramen might wish more of the menu options had been broken out onto discrete buttons – such as the manual audio level control we mentioned earlier.

As you would hope in a camcorder this expensive, in bright conditions the FX7E totally excels. However, the default settings produce vibrant colour saturation rather than naturalistic fidelity. It’s a matter of taste which you prefer, with the FX7E’s colours being very eye-catching, but some professionals prefer more realistic video which can then be treated as required when editing. The image is also extremely sharp, thanks to the ClearVID CMOS, although there is a certain amount of grain visible.


The excellent performance continues into lower light, as well. In reasonably well lit indoor conditions, the FX7E manages almost the same colour saturation as it does in broad, bright daylight. The only loss is a slightly duller look, but mostly in keeping with the duller lighting. Unfortunately, the downsides of the smaller CMOS sensors do start to show themselves as the amount of light reduces, however. Compared to our experiences with the FX1E, the FX7E provides a sharper, more saturated image in good daylight conditions. But in low light it is a step backwards. 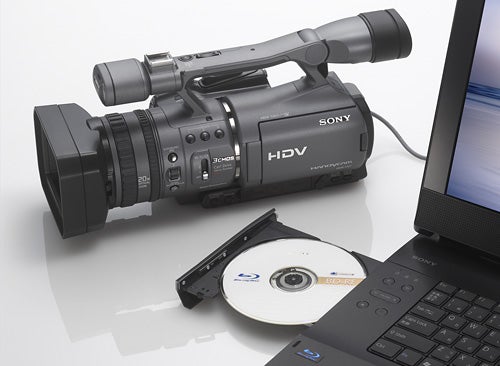 Being HDV, footage from the FX7E will be very easy to edit, as the format is now almost universally supported, even including the Vista version of Windows Movie Maker. And for watching the footage on a screen, the FX7E is bang up to date, with HDMI alongside the more usual component, s-video and composite analogue connectivity – although all of these are output only. Firewire is of course available for PC connectivity, as is USB for use with the built-in MemoryStick card slot.


The HDR-FX7E is a beast of a camcorder, and its price will be well beyond most people’s budgets. However, if you’re serious about your videomaking it could make a wise investment. Note that the price for this camcorder varies widely depending on the vendor, from around £1,500 including VAT to nearly £2,000 plus VAT. At £1,500 inc VAT, despite our caveats about its performance in low light, the HDR-FX7E is an absolute bargain. If you can live without XLR audio, it’s an ideal camcorder for anyone looking to do professional video work with a limited budget.