Sony’s flash memory-based camcorders have already impressed us considerably, with the HDR-CX105E being our current model of choice if you only have £400 to spend. But Sony also offers higher-end models that record to flash memory. Near the top of the range is the HDR-CX505VE. With a sensor the same as the HDR-X520, it promises premium video performance but in a more compact form.


Like the X520, the CX505VE is built around a 1/2.9in CMOS sensor with a gross 6.6-megapixels. This incorporates Sony’s Exmor R technology, which places the sensor wiring behind the pixels, so more light is allowed in. In the past, we’ve found this an effective system, providing better low light performance than would normally be expected given the sensor size. The high pixel count is interpolated to provide 12-megapixel still images as well.


The main video format is Full HD AVCHD, with data rates up to 16Mbits/sec, not the 24Mbits/sec now available from JVC and Canon. But you can also shoot in SD quality if required. There’s 32GB of flash memory on board, which will be enough for around 4.5 hours of footage at the top quality setting – more than ample for most holidays or events. But there’s also a MemoryStick Pro Duo slot available for expansion, should you ever need extra.

The CX505VE is clearly not intended for enthusiasts, but it does have a few features that will be useful for the more discerning video maker. There’s no lens ring, but Sony does supply a dial on the rear of the device instead. Press the manual button, and this dial operates focus. It’s very slow in operation, so you won’t be able to perform focusing effects whilst shooting. But it’s far more accurate than a menu-based control so can provide sharp detail where the automatic system might focus on the wrong object.


There’s also an accessory shoe available, but as with all Sony camcorders over the last few years this uses the company’s proprietary Ai format, rather than the standard size. So you will be confined to Sony-branded peripherals only. There are also no minijacks available for an external microphone or headphones.

Apart from the manual focusing dial, and a discrete button toggling Nightshot mode, all other settings are accessed via the touchscreen LCD. The CX505VE provides two menu systems. The simple option includes just six onscreen buttons, for selecting a scene mode, turning face detection and low light mode on or off, choosing recording mode, and calling up Sony’s Spot Metering and Focus mode. This now ubiquitous option lets you choose a point within the frame to use as reference for exposure and focusing. It’s a very easy system to operate, and Sony was one of the first to offer it, but now even some mobile phones have the facility.

If you want even more control, there’s a full menu system as well. This is the new scrolling list which we first saw in the HDR-TG7VE. You can employ spot focusing and metering independently, or control either via onscreen sliders. However, the CX505VE offers no direct access to shutter or aperture settings – these are rolled into a global exposure control. Curiously, there are auto-exposure shift and white balance shift controls available, allowing you to bias either setting up or down. 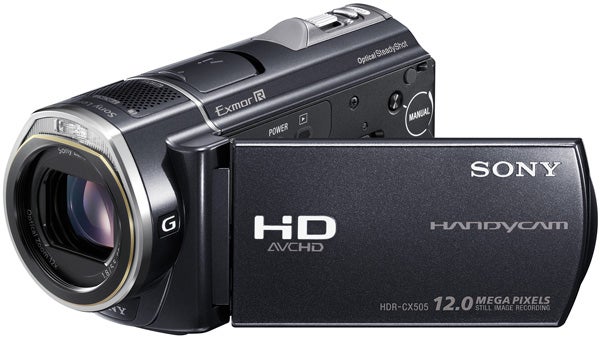 The CX505VE also offers Sony’s Smooth Slow Record. This buffers a few seconds of video at a lower resolution and higher frame rate than normal, then records it to memory at the regular resolution and frame rate. The result, as the name suggests, is silky-smooth slow motion, although the higher frame rate is not as extreme as is available with some other camcorders, such as JVC’s Everio GZ-HM400. Annoyingly, the tele macro mode is also buried in the full menu, and there doesn’t appear to be a backlight compensation setting at all.


When shooting, the touchscreen sports controls along its edge for operating the zoom and toggling record. This makes two-handed, hip-level shooting very comfortable, although the zoom rocker and record button are well positioned for the more traditional HandyCam posture too.

This is another Sony camcorder that includes rather gimmicky GPS functionality. A switch on the side of the unit turns the GPS receiver on, which will then try to ascertain your current location. Once it has, any videos you shoot will be tagged with this information. The CX505VE contains a simplistic world map that you can browse to see where you are. This is also provided in one of the playback modes, so you can view where you shot footage alongside a representative thumbnail of the clip. However, geotagging is far less widely supported by video sharing sites than it is by photo sharing sites, making the CX505VE’s GPS system fun but not exactly indispensible.

With its large CMOS sensor, the CX505VE offers excellent video performance in most conditions. In good lighting, colours are vibrant and detail sharp. Sony’s characteristic vibrancy is displayed, which will please most consumers but isn’t quite realistic for professional use. Low-light capabilities are also exemplary. The Exmor R sensor technology proves its worth once more. The image is a little less bright than Panasonic’s HDC-HS300, TM300 and TM350, but the colours are slightly more accurate. In particular, there is less noise visible, so detail is clearer. 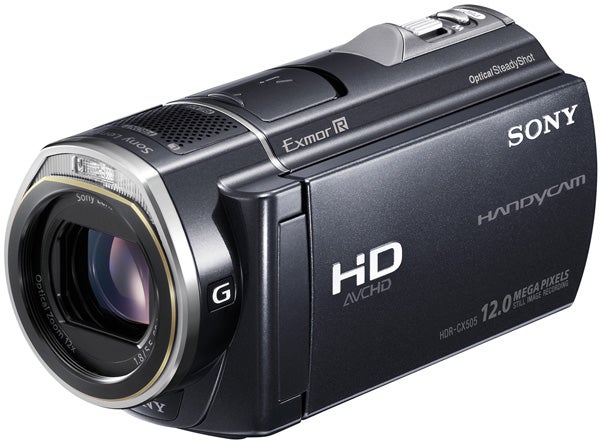 Like most recent Sony camcorders, the flaps covering the CX505VE’s ports are reassuringly sturdy. There’s a proprietary A/V port, with cables supplied for both component and composite analogue video, which also incorporate RCA stereo audio. The CX505VE also sports HDMI, although this is a mini port rather than full-sized, so an adapter is required for HDTV connection, which isn’t supplied in the box. Naturally, USB is supplied for transferring video files to a computer for editing. Since the video is bog-standard AVCHD, virtually any editing application will now handle it.


The HDR-CX505VE shoots great video, has Sony’s usual sturdy build, and is fairly compact for a camcorder offering this level of image quality. For point-and-shoot users looking to achieve good results without much fuss, it’s a tempting proposition. However, it’s also quite an expensive one. Panasonic’s HDC-HS200, which sports an 80GB hard disk and offers similar image quality and features, costs a lot less. It may not be quite so small as the CX505VE, but it’s better value overall.