Sony led the market for high definition camcorders, with the first semi-pro HDV model to hit the UK at the end of 2004, the HDR-FX1E. Less than a year later, the technology had been brought down to the consumer level with the HDR-HC1E. But as high definition has become cheaper for the everyday videomaker with models like the HDR-CX105E, Sony’s semi-professional models have remained similarly priced. Although the latest model in the line, the HDR-FX1000E, doesn’t buck this trend, it does provide professional performance at a much more tempting cost than Sony’s fully professional models. 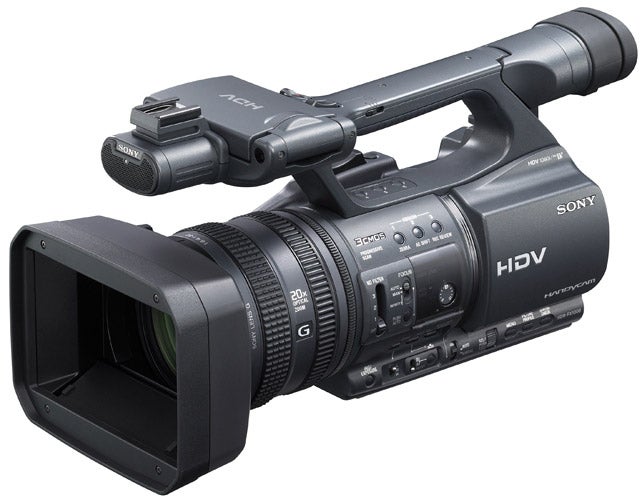 Sony is somewhat different to other camcorder manufacturers. Although it has distinct HDR consumer and HVR professional high definition camcorder ranges, most HVR models have HDR equivalents, with the same core chassis but fewer professional options. The seminal HDR-FX1E was sibling to the HVR-Z1E, the HDR-HC1E had the HVR-A1E, and the HDR-FX7E was a consumerised version of the HVR-V1E. The HDR-FX1000E is next in line, with its pro equivalent being the HVR-Z5E, which costs around a grand more.


What you lose in the transition from HVR to HDR is primarily the XLR audio inputs and some important professional features. The XLR ports provide balanced audio connectivity, so cables don’t pick up electrical interference. The FX1000E just has a single stereo minijack input, making connecting multiple audio sources more difficult. However, unlike previous FX models there is still a progressive shooting mode available, so you have 50i and 25p HDV options as well as DV. The HDV modes are still recorded in 1080i format so will both be entirely compatible with editing software. 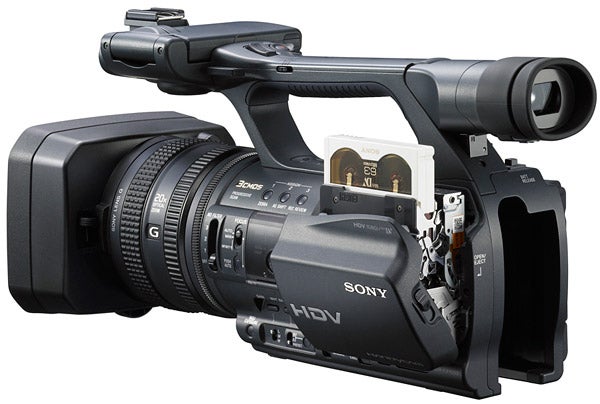 The most important feature you don’t lose between HVR and HDR is the core video hardware. Like the FX7E, the FX1000E uses ClearVid CMOS sensors. But instead of using smaller 1/4in units, which gave the FX7E no better performance than the FX1E, the FX1000E sports 1/3in units with Exmor derived technology. They still only have 1.1-megapixels each, though, which is lower than the 1.55-megapixels required by the HDV recording format. The Sony G lens is fixed, but offers a healthy 20x optical zoom. The downside of the meatier sensors is that the FX1000E is back up to 2.1kg, where the FX7E weighed in at a svelte 1.4kg.

The FX1000E still records its HDV to tape, which seems a bit retro now that AVCHD has virtually taken over in consumer camcorders. Sticking with HDV ensures complete compatibility with professional editing workflows, and there are now a number of compatible solid-state recorders you can add on to speed up production. But we would still like to see built-in solid state recording, as with the HVR-Z5E, considering how Panasonic and now JVC are embracing the move away from tape. 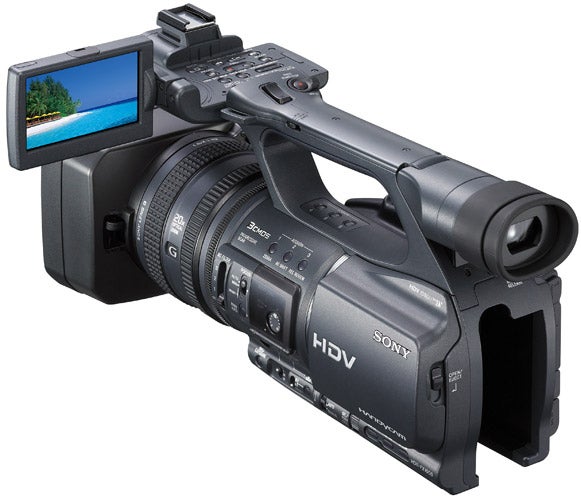 Three lens rings are provided, for focus, zoom and iris, although the latter of the three is only active in full manual mode. You need to press a further button to enable shutter adjustment, which operates via the menu control wheel. There are discrete buttons for pretty much every other function. A switch sets three levels of neutral density, handy for allowing wider apertures with shorter depth of field in bright conditions. There are two custom white balance presets positions, plus a further option to enable one of the built-in presets. Up to 21dB of gain can be added, via a switch with three customisable positions. There are also six assignable buttons, although three also double up to enable zebra, AE shift and recording review. 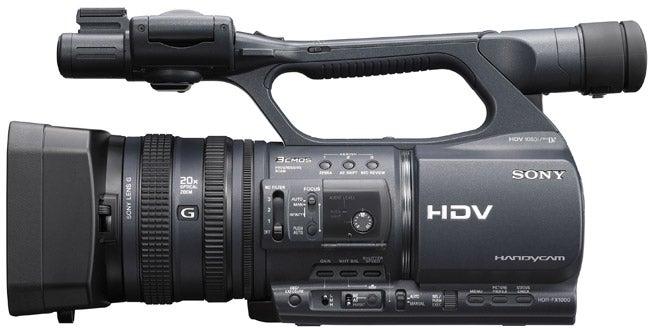 Surprisingly, there is no way of storing and recalling focus or zoom positions, a feature we particularly like in Canon’s XH and XL series camcorders. But you do get Picture Profiles, which bundle settings for gamma; black compensation; knee point; colour mode, level, phase and depth; white balance shift; and sharpness. There are two user-customisable positions, plus presets for portrait, cinema, sunset and monotone. A separate button and the menu wheel cycles through the various options. 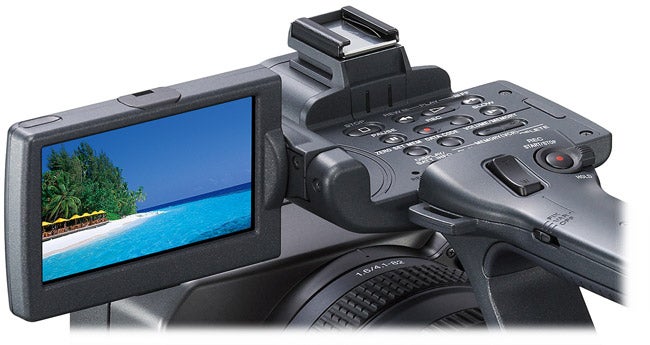 The standard accessory shoe sits on top of the built-in microphone, but is directly in front of the flip-out LCD panel. The latter will therefore be hard to stow or open with an accessory attached to the shoe, although we like the positioning of the LCD when extended. It’s very easy to see from most angles, particularly when using the camcorder handheld. The basic kit comes with a miserly NP-F570 15.8Wh battery pack, although this is enough for a couple of hours of shooting. However, the battery cavity is deep, supporting units up to the NP-F970 with 47.4Wh, which will be good for as much as seven hours of use.

Since the FX1000E is a professional model and in a different price bracket to most of the camcorders we test here at TrustedReviews, image quality is also naturally in a different league. To put things in perspective, the FX1000E has three CMOS sensors of a similar size to the single ones used in models such as Canon’s HF11 or Sony’s HDR-XR520. So it has around three times the light collection area. 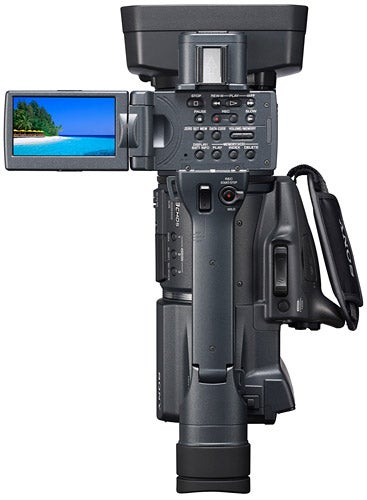 In optimal conditions, the FX1000E produces a crisp, colourful image, and Sony doesn’t apply the extra saturation which is the hallmark of its consumer camcorders. The image is a little darker than some camcorders in its class, notably the similarly-priced Canon XH-A1, and very slightly more noisy, but overall performance is very faithful and packed with detail. The darker image carries forward into low light, although the FX1000E produces more colour saturation than the Canon XH-A1. There is a little less detail, but also less noise, so you can turn up the gain with fewer ill effects. This is likely the result of the Exmor technology – the use of A/D converters at each column of photodiodes on the CMOS sensor as well as pre and post conversion noise reduction – and it means that the Sony can shoot cleaner video in poor illumination than the Canon. 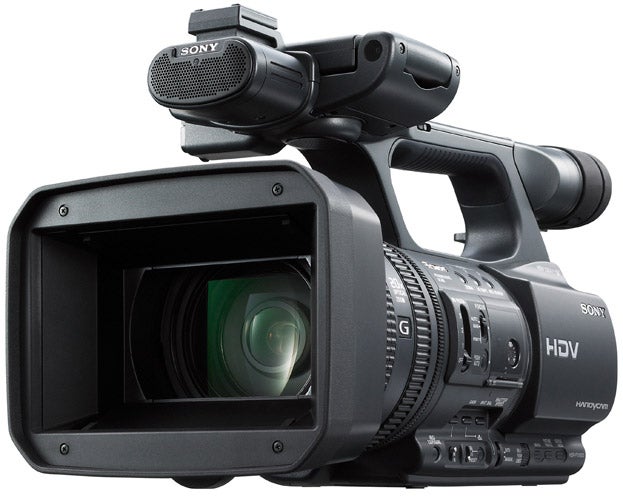 We also like the way Sony has integrated the camcorder’s connectivity. The rear ports are very cleverly designed, with covers that swing out of the way entirely, but lie flush with a nearby surface so there is no risk of damage. Compared to the annoying rubber flaps on even some professional camcorders, this is very ergonomic. Furthermore, the separate flaps for headphones, power, and video I/O show excellent attention to how professionals actually use these connections.


The Sony HDR-FX1000E’s name is rather reminiscent of the seminal DCR-VX1000E, the camcorder which arguably kick-started the digital video revolution. This model is far less of a radical change, but it’s still a great professional camcorder, and improves yet further on the video quality of previous HDR-FX models. If you’re familiar with Sony camcorders, this is likely to be a very appealing package indeed. However, with Canon’s similarly priced XH-A1 and XH-G1 both offering similar video performance, but with XLR audio as well, the Sony loses out slightly on value.