This time last year, Sony impressed us greatly with the unfeasibly tiny HDR-TG3, and it still stands up as a classic piece of design. There have been smaller camcorders since it arrived which claim to shoot HD, but the TG3 remains the real deal – a true HD camcorder in a slim format you could easily fit in a pocket. But technology marches forward ceaselessly, and now Sony has launched another unfeasibly dinky HD camcorder. The HDR-CX105E has a more conventional form factor, but is still impressively dimensioned.


The CX105E is bigger than the TG3. Although it’s only 40g heavier, the chassis is almost twice as thick. Nevertheless, the sub-300g weight could hardly be described as portly, and it remains one of the smallest ‘Full HD’ (interpolated) models on the market. You just won’t be able to slip it into a jacket pocket without making your chest look lumpy. 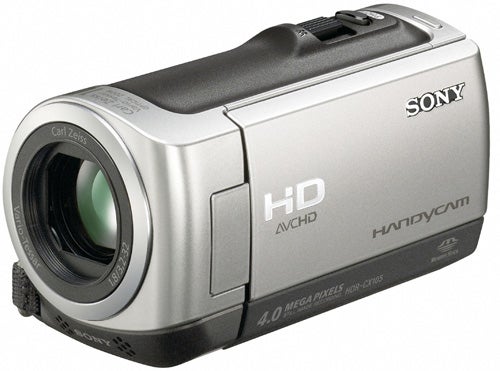 Like the TG3, the CX105E relies on a 1/5in CMOS sensor, but this time it uses Sony’s Exmor sensor technology rather than ClearVid. Exmor places the wiring behind the photo diodes, theoretically providing more usable area and greater sensitivity. Our first experience of this in a consumer camcorder, the HDR-XR520, impressed us considerably. That model uses a larger sensor, but Exmor has even more potential for less well endowed units, where low light performance needs all the help it can get.

The CX105E also incorporates 8GB of flash memory. However, this is really only enough to get you started, as it will store a mere hour of footage at the top AVCHD data rate of 16Mbits/sec. Sony also provides a slot for expansion, but naturally this is the company’s proprietary MemoryStick format, which in this case is of the Pro Duo variety. This is a little more expensive than SDHC, but not heinously so. An extra 8GB in this format will set you back about £25.

As this is a tiny pocket camcorder, there are few provisions for the more serious videomaker. There is no accessory shoe, nor minijacks for an external microphone or headphones. The few discrete buttons, which are available beneath the LCD, control global features like switching to playback and Easy mode, the latter hiding the majority of settings for those worried that they might end up configuring them accidentally. The CX105E also has face detection to help get the exposure of human faces correct automatically. However, one automated feature we would have liked is a lens cover that opens when the camcorder turns on, like many HD camcorders in this class now have. But instead you have to open this yourself with a slider on the side. 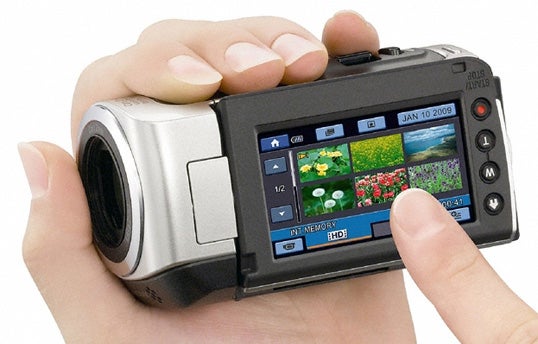 If you do want to delve into manual settings, these are all controlled via the touchscreen LCD. As with the XR520, the one-touch system now extends to simultaneous configuration of focus and exposure with a single tap. You can still access these two settings separately, like previous Sony touchscreen camcorders, and there are manual sliders to control them as well. But there is no way of changing the shutter speed directly. The only way to bias this is via one of the scene modes, such as the Sports option which selects the fastest possible shutter. There are eight other scene modes to choose from as well. 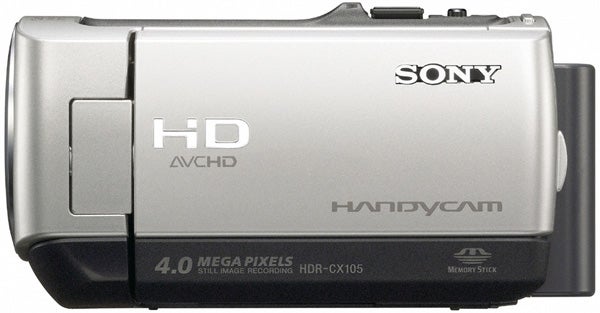 The CX105E also incorporates Sony’s Smooth Slow Record. This is a separate mode alongside Movie and Photo that captures footage at four times normal speed. However, it only works for three-second bursts, which are buffered and then transferred to create 12 seconds of regular AVCHD. Quality isn’t as good as when recording at normal speed, and Sony hasn’t made public what resolution or data rate is actually used when buffering. But the results are quite reasonable, and look better than some of the slo-mo options available from other manufacturers.

With its relatively small sensor, the CX105E is unlikely to vie with the company’s premium models such as the HDR-XR520 for image quality. But it still does better than would be expected for a 1/5in CMOS sensor. This sits in between Panasonic’s latest budget HD models, such as the HDC-SD20 with its 1/6in CMOS, and Canon’s LEGRIA HF20, which sports a larger 1/4in unit.


However, Sony’s Exmor technology has clearly managed to work its magic once more, producing superior low light performance than usual for a sensor this size. The image is brighter than the Panasonic and Canon competition, and also an improvement over JVC’s Everio GZ-HD300. That said, there is considerable noise which obscures detail, so it’s far from a perfect image. Nevertheless, for a camcorder this size the CX105E provides the video quality necessary in that all-important environment: poorly lit rooms. 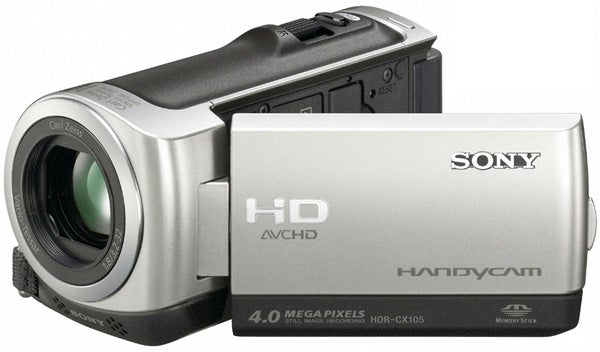 In brighter conditions, the quality is even less distinguishable from higher-end models. Close inspection will reveal slightly less fine detail than the top models, as the CMOS only uses 1.4-megapixels of its 2.3-megapixels when shooting video, which isn’t quite enough for the 2.07-megapixels required for Full HD. But the image is still very sharp, and colours have Sony’s characteristic saturation. So they’re faithful, but with the emphasis on vibrancy more than absolute accuracy.


The Sony HDR-CX105E doesn’t have the gobsmacking excitement of the HDR-TG3. It’s not quite so small and although light, its form factor will mean it doesn’t slip so easily into the pocket, unless you’re wearing Barbour. But it does offer even better image quality, and will hardly be a pain to pop in your bag.


The icing on the cake is that, unlike many of the camcorders we’ve seen this year, this one doesn’t arrive at a noticeably higher price than previous models. In fact, for under £440, it’s good value even by 2008 standards. It may not have many or any features for the enthusiast, but if all you’re after is an easily portable camcorder that shoots high quality HD video, the CX105E fits the bill very nicely indeed.