The new FE 24-240mm f/3.5-6.3 OSS is aimed at a user who values convenience very highly. It is a lens with a 10x optical zoom range, and as such it can cover a huge variety of different shots, from landscapes and portraits to travel, and even at a push some wildlife and sports images.

It may not have a large aperture, but this is a lens to leave on your camera knowing that, in most cases, you will be able to get the shots you need. It sounds too good to be true.

There is, of course, a compromise. A zoom lens with such a wide focal range is going to be very complex, and indeed the 17 elements in this lens are arranged into 12 different groups. This means that somewhere within that range the optical quality is going to suffer, and this will show in different ways in different images.

Curvilinear distortion, chromatic aberration, vignetting and lack of sharpness are potential problems that we have seen in other travel zoom lenses. But are any of these problems severe enough to put the lens beyond consideration?

As stated, the lens is constructed from 17 elements arranged into 12 groups, with lens-based optical stabilisation helping to reduce camera shake, which is essential when shooting at the 240mm end of the focal range.

As is common with travel zoom lenses, the aperture range is f/3.5 at its widest 24mm setting, stopping down to f/4 by about 30mm, f/5.6 by around 70mm and f/6.3 by around 110mm. Having larger, or more constant, apertures would require a significantly larger lens design, which defeats the object of having a reasonably sized travel zoom lens in the first place.

It is worth noting at this point that the 24-240mm currently has the longest focal length of any FE-mount lens, beating the previous holder of that title, the FE 70-200mm f/4 G OSS.

Measuring 80.5 x 118.5mm, the lens is a reasonable size. Personally, I wouldn’t consider it large, although others may disagree. It weighs 780g, which again I find quite reasonable for a travel zoom lens, particularly one with built-in optical stabilisation and designed for a full-frame camera.

I tested the lens on the Sony Alpha 7R, and the combination felt good in the hand. There is obviously an imbalance between the lens and camera, but again, I never found this to be an issue. A Nikon D7000 and 18-200mm lens may be better balanced, but that camera is significantly larger. Here, the combination of lens and camera is smaller, and for travelling that is exactly what I would want. 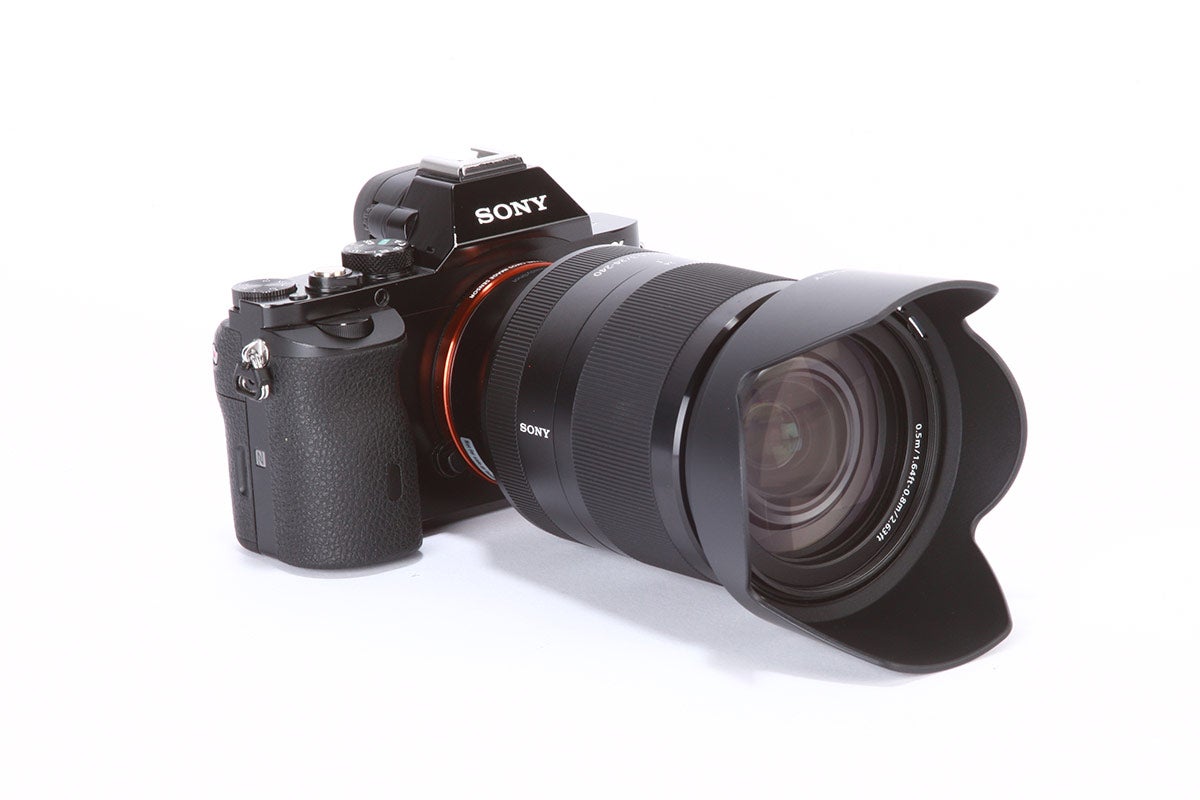 The lens has a large ribbed zoom ring, and a smaller focus ring nearer to the body of the camera. Besides these, there are no other controls on the body of the lens. Notably, there is no zoom lock. The lack of lock isn’t actually a problem as the zoom barrel is quite stiff to turn. This doesn’t make it too easy to zoom quickly and smoothly, so if you’ll be using this lens for video it would be best to use a follow focus lever. However, the lens does benefit from a total lack of lens creep. I tested this by having the lens face down and turning the zoom barrel to various focal lengths – not once did it creep out of position. On many lenses there is usually at least one position where it edges out of place, but that’s not the case with this 24-240mm optic.

As with other lenses in the FE range, the 24-240mm has electronic, fly-by-wire focusing, which means that turning the focus ring signals for the electronic motors to adjust focus of the lens. I found this smooth and straightforward to use, and it produced accurately focused images, especially with the aid of the viewfinder or rear screen’s manual-focus magnification.

Image stabilisation works reasonably well. When you lightly press the shutter button you can see the stabilisation working. After a second it settles and counteracts any shake with a more fluid, floaty movement, giving around 4 extra stops of shutter-speed exposure. Generally, I found that I could shoot at about 1/60sec with the lens set to 240mm, although I did manage a perfectly sharp shot at just 1/15sec, which would support Sony’s claim.

Focusing operates at a good speed at the wideangle settings, although it is slower at 240mm, at which point the f/6.3 maximum aperture setting allows less light to reach the sensor. With the Sony Alpha 7R relying on contrast-detection AF, having a good amount of light is critical – the lack of it results in slightly slower, and sometimes less accurate, focusing on the Alpha 7R. With the Alpha 7 and Alpha 7 II, I found that focusing was a little faster at the largest aperture and longest focal length.

Usually, you don’t expect much in terms of resolving power from a travel-zoom lens, but in the very centre of the image this 24-240mm optic is extremely impressive. This is true even when paired with the Sony Alpha 7R, where the 36.4-million-pixel, full-frame sensor is quite unforgiving. 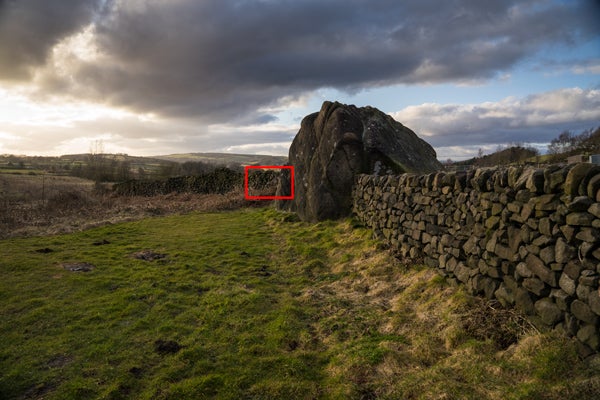 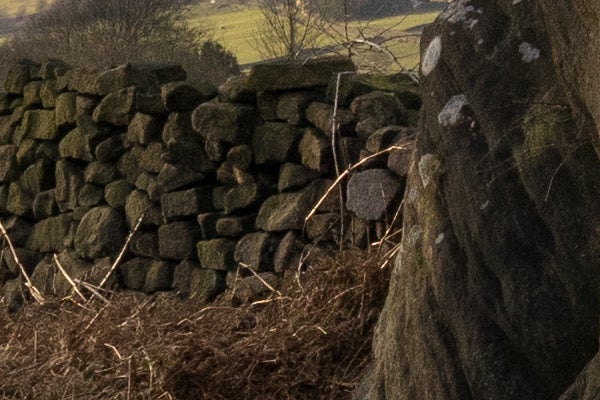 Blades of grass look sharp and crisp at the 24mm setting, especially between f/5.6 and f/11. The top and bottom of landscape images are also reasonably well rendered. However, there is a drop of resolution in the corners of the image. This is typical of travel-zoom lenses, and the shallower depth of field compared to equivalent APS-C shots can further exaggerate the softness if you don’t take this into consideration. 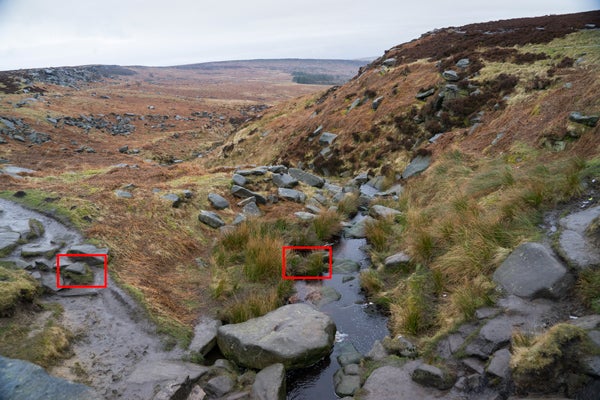 The lens is well-suited for landscape shooting 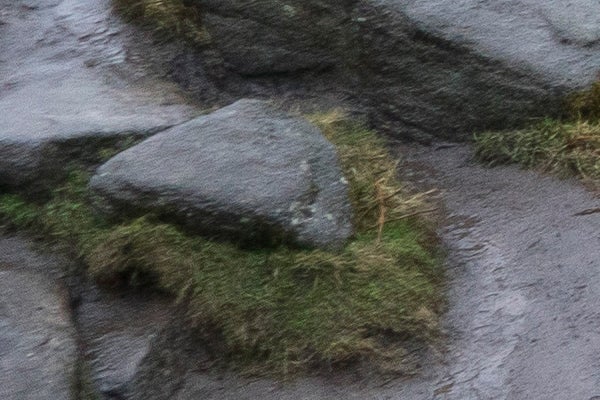 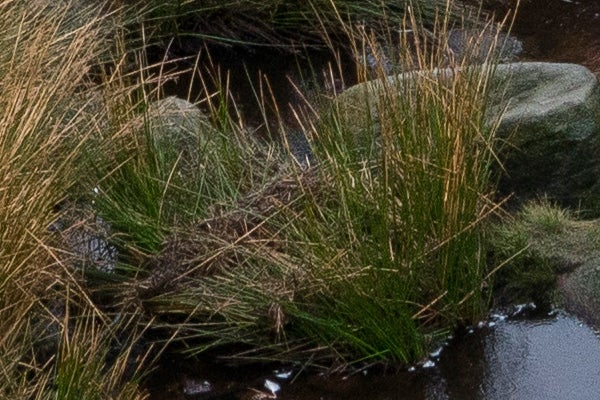 At the lens’s 240mm extreme, with an aperture of f/6.3, there is a loss of definition. The centre and edges are noticeably softer, and the sweet spot for the lens at this focal length is at f/11. Here, fine detail can be resolved, although the corners can be soft. 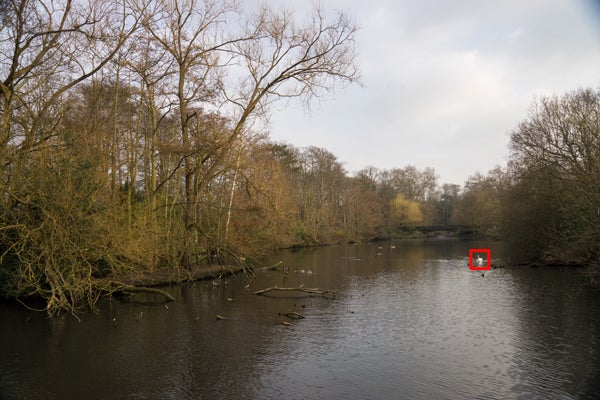 An image taken at 24mm 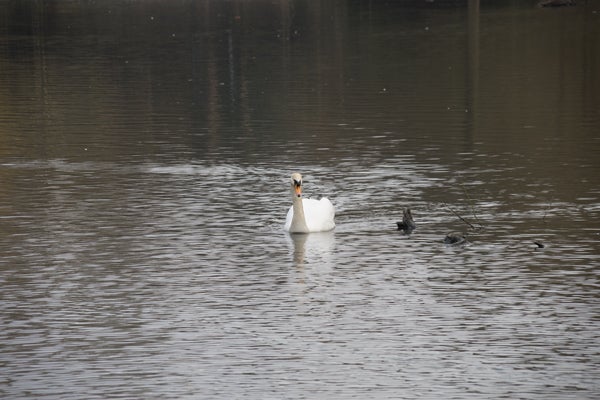 What was interesting was that while doing this test I made some 300ppi prints from A7R images, which were slightly larger than A3. Alongside these I made some comparison A3 and A4 prints. I have to say that despite the edge softness being apparent when viewing images on a monitor at 100%, it isn’t as noticeable on A3, and particularly A4, prints. All the prints look perfectly acceptable and I wouldn’t hesitate to make prints for my wall. With some care taken to learn where the lens performs at its sweet spot, you can some great images.

As you would expect from such a complex design, there is some chromatic aberration, although this is easy to remove from raw images. 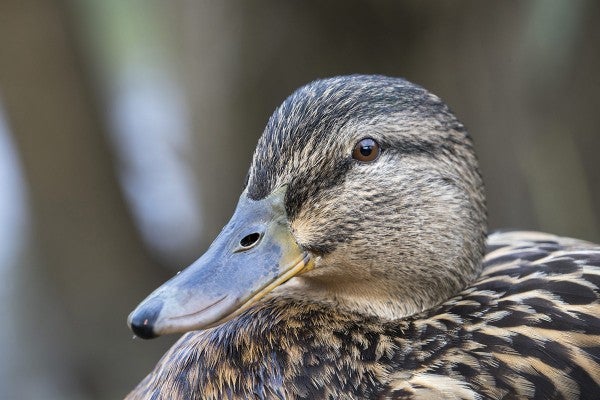 The lens is capable of producing crisp images with excellent detail

At the 24mm setting at f/8 the 24-240mm lens is extremely sharp and is among the best I have seen from a travel zoom. The edges are soft, but still acceptable. Resolution drops as the focal length increases and at 240mm you need to shoot at f/11 to really get the best from the lens, but sadly the corners still suffer badly. 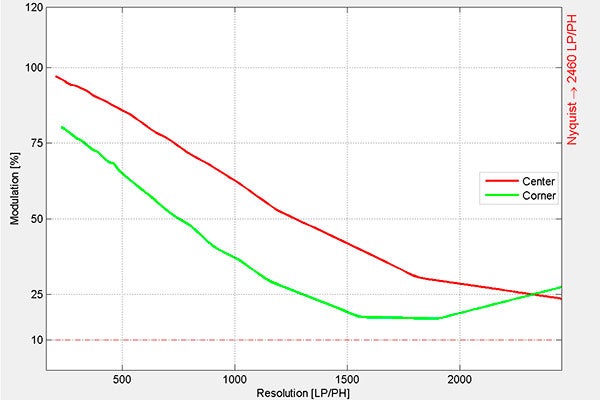 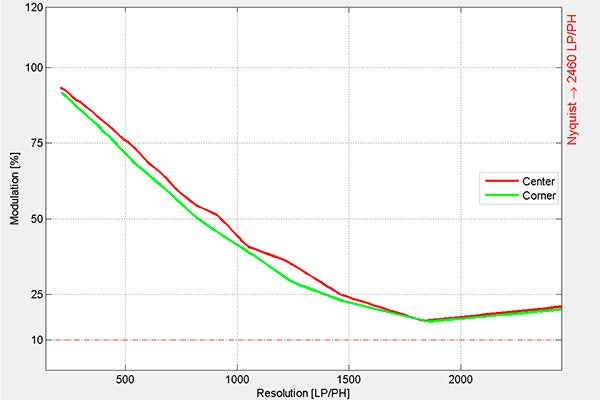 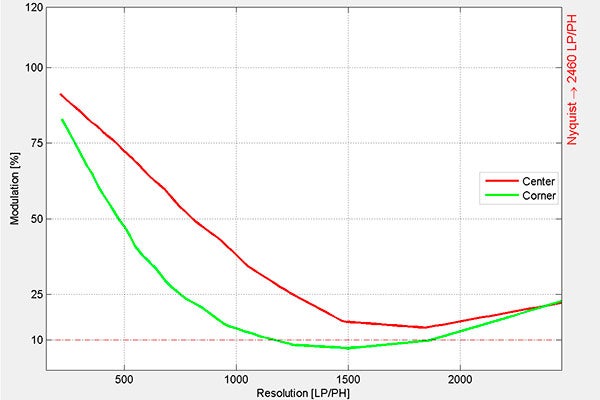 At 240mm, even at the optimum aperture of f/11 we see the corners deteriorating 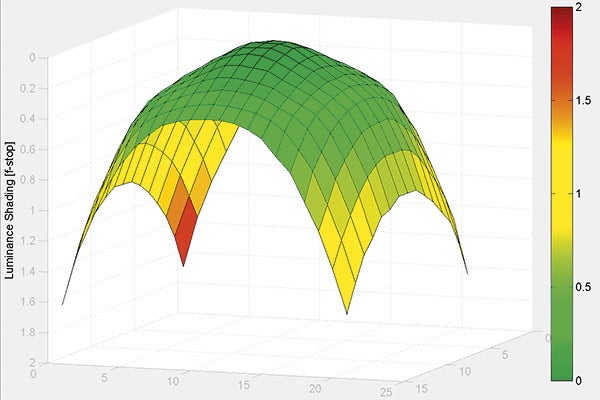 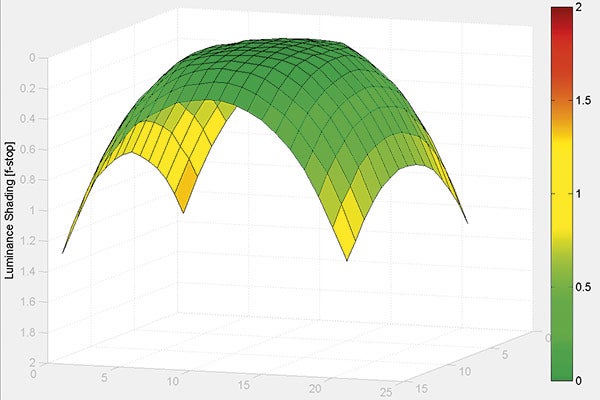 Our tests show that vignetting is quite severe at both 24mm and 240mm, although it’s much lower in the middle of the range. Obviously, it is easily reduced and removed in Camera Raw or similar software. Indeed, if in-camera compensation is enabled, it will be removed almost completely from JPEGs. However, if you don’t correct for distortion at wideangle in raw images, you’ll still see darkening in the extreme corners of the frame. 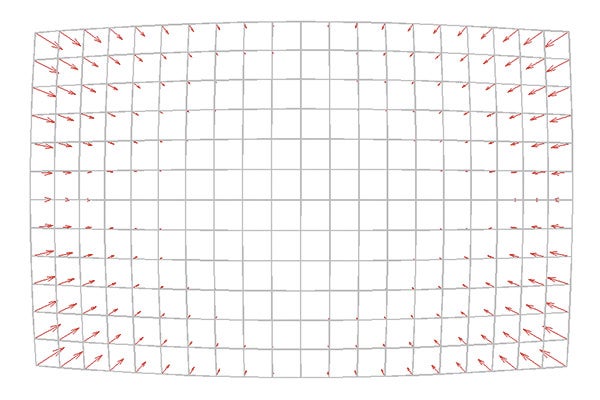 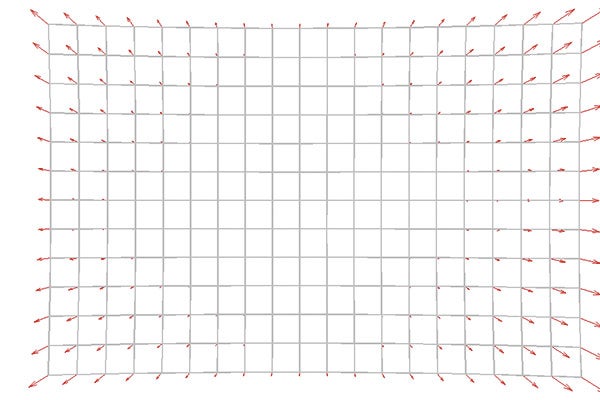 The 24-240mm is designed around software corrections, and camera JPEGs are essentially free of any distortion. However, in raw files barrel distortion is present until about 50mm, beyond which it turns to pincushion. Correcting this distortion is easily done, but the slight stretching of the image doesn’t help the sharpness. 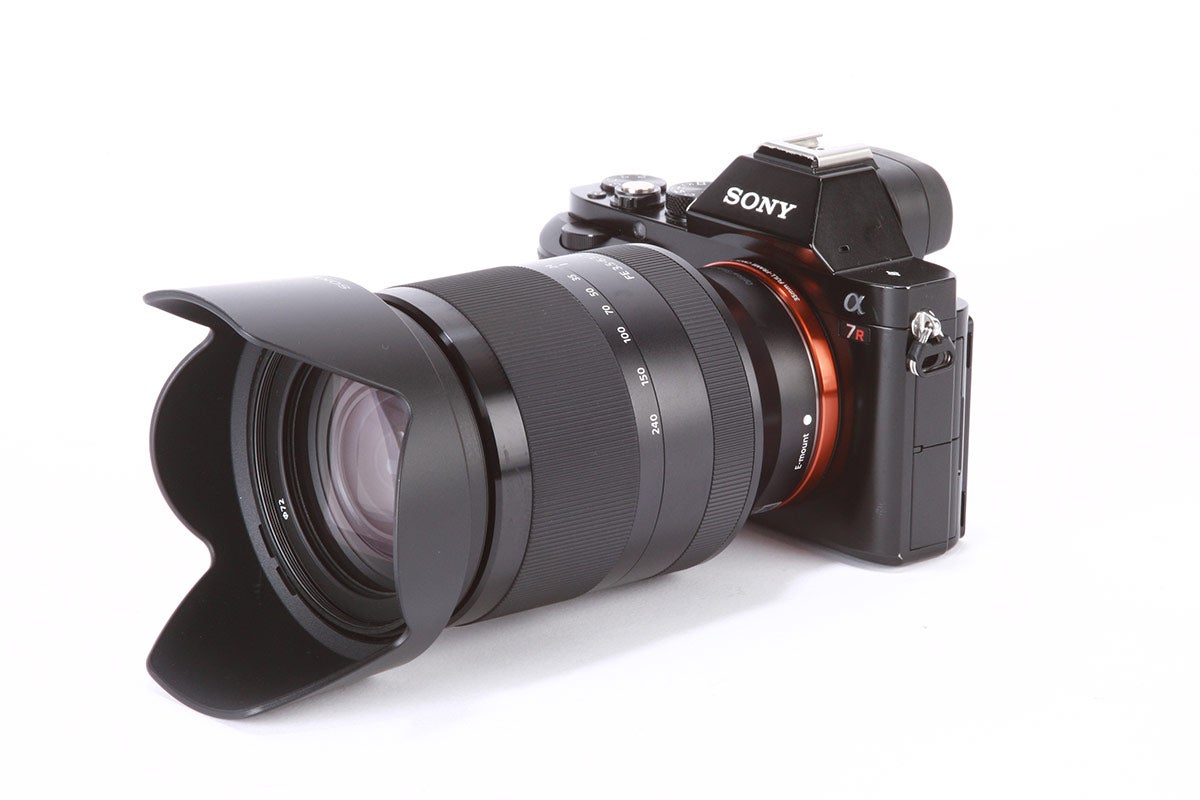 As with all travel-zoom lenses, the Sony FE 24-240mm f/3.5-6.3 OSS is a compromise. The complex optical design means that images are soft at the edges, but the centre sharpness goes some way to make up for this. In fact, the centre is staggeringly sharp when shooting wide. However, at the 240mm end you need to stop down to f/11 to get acceptable results. As to whether the 24-240mm lens is worth buying, this comes down to, again, how much you can accept its flaws compared to its convenience.

In essence, the 24-240mm has the quality of a good kit lens, but with a focal length that can’t be equalled without a significant financial, and backbreaking, investment in extra glass. Those who demand the best image quality already know the downside to travel-zoom lenses, and this Sony 24-240mm optic certainly won’t be for them, but as a travel companion I think this will form a good partnership, especially with the Alpha 7 II and its advanced image stabilisation system.