Not so long ago, any discussion on Sony’s Alpha 7 full-frame mirrorless system always began with the same caveat: although the cameras were innovative and impressive, the lens system lacked the depth to best take advantage.

Now, four years on from the launch of the original Alpha 7, the situation has changed. Sony has most of the basics covered, with a full set of both f/4 and f/2.8 zooms, alongside a series of stellar f/1.4 primes, backed by more affordable, smaller aperture primes. So it’s now looking to extend its FE lens lineup with some more extreme, specialist optics.

Hence, the appearance of the Sony FE 12-24mm F4 G. Launched back in May alongside the faster FE 16-35mm F2.8 GM, this £1700 lens expands the horizons of Sony’s full-frame system into ultra wide-angle territory. Indeed, with a 122-degree diagonal angle of view, it’s one of the widest rectilinear zooms ever made for full-frame cameras; it’s surpassed only by Canon’s EF 11-24mm F4L USM costing £1000 more. But it’s in comparison to that superb lens, and the £1400 Sigma 12-24mm F4 DG HSM Art, that the Sony must be judged – and in this regard it performs rather well.

To achieve the lens’ huge angle of view, Sony has employed a complex optical formula with 17 elements in 13 groups that include four aspherical elements, three crafted from extra-low dispersion (ED) glass, and one of Super-ED glass. The aim is achieve excellent corner-to-corner sharpness and resolution, while minimising chromatic aberration.

In addition, Sony’s Nano AR coating is employed to suppress flare and ghosting, which can be a serious problem with lenses that cover such a wide field. 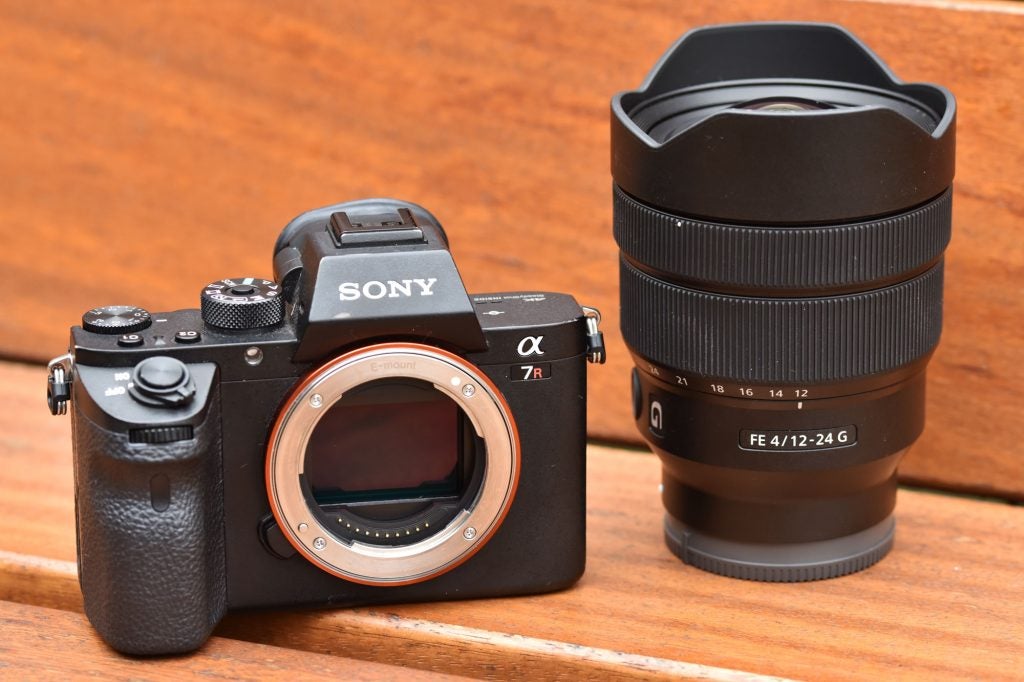 The lens’ G-series designation places it as a premium optic, if not quite at the same level as Sony’s top-of-the-range G Master series.

The firm says that it ‘emphasises a graceful balance between high resolution and gorgeous background bokeh’, although it’s unlikely you’ll get much in the way of blurred backgrounds in normal use, except when the lens is set close to its minimum focus distance of 28cm. Nevertheless, the seven-bladed diaphragm still uses curved blades in a bid to render out-of-focus areas as attractively as possible.

A fixed, petal-shape lens hood is built in to help suppress flare, while also providing useful protection for the striking, dome-shaped front element. As is usual for a zoom this wide, there’s no way to attach filters to the front of the lens; Sony hasn’t provided a rear holder for gel filters either. So if you want to use neutral density or polarizing filters, you’ll have to find a third-party solution. 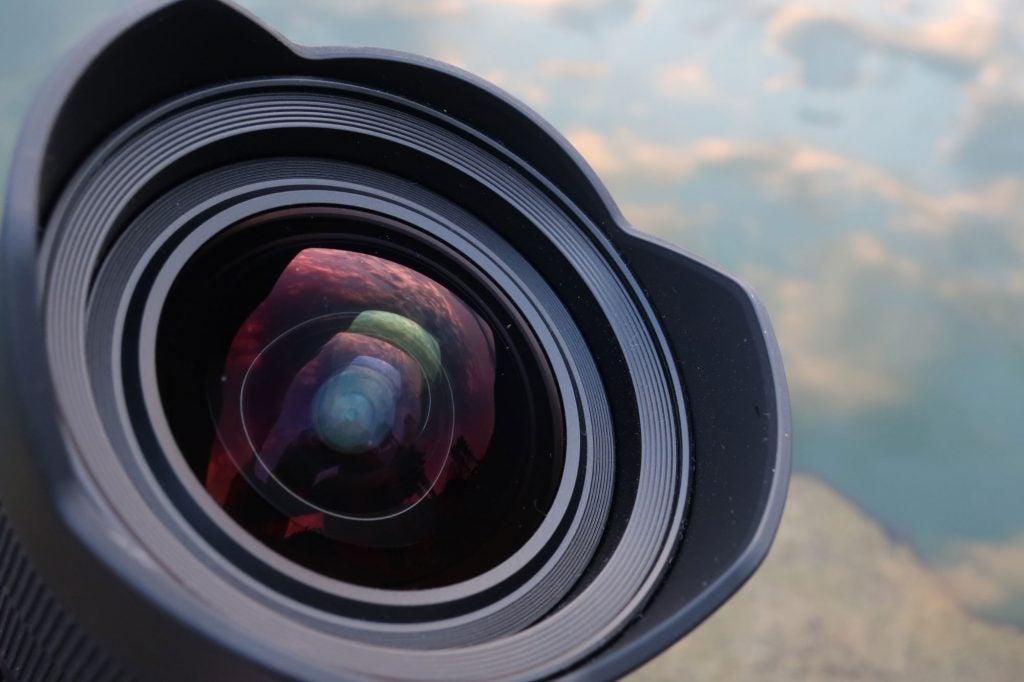 The FE 12-24mm F4 G can of course be used on Sony’s APS-C mirrorless models, on which it will give an 18-36mm equivalent view. But unless you use a full-frame camera too, you’ll almost certainly be better off with the smaller, cheaper, stabilised Sony E 10-18mm F4 OSS that also gives a wider view on APS-C.

If you’ve used a full-frame ultra-wide zoom before, then the first thing you’ll notice about the FE 12-24mm F4 G is its size. Or rather, lack of it: at 87mm in diameter and 117.4mm in length, it’s considerably smaller than similar lenses made for DSLRs.

At 565g, it’s also less than half the weight of the aforementioned Canon and Sigma – an advantage that stems directly from the system’s mirrorless architecture. In fact, it isn’t even radically larger than the Sony FE 24-70mm F4 OSS ZA. 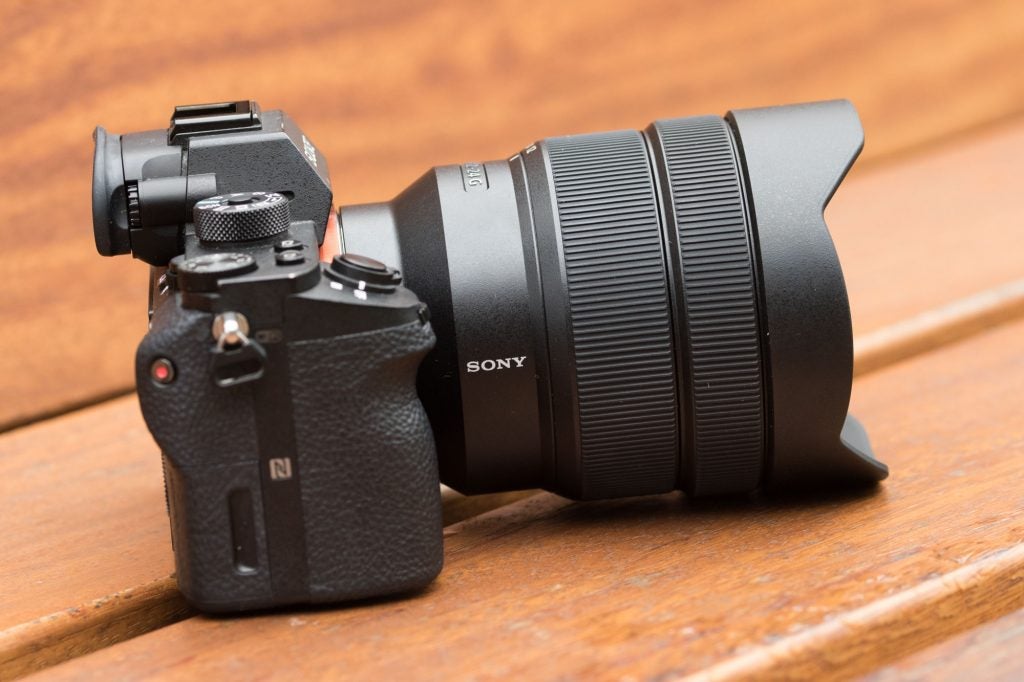 Despite the lens’ light weight, there’s little to complain about when it comes to build quality or handling. The barrel exterior is made from high-quality plastic, with rubberised grips for the zoom and manual focus rings. Sony describes the lens as dust- and moisture-resistant, so the lack of a rubber seal around the metal lens mount comes as a surprise. 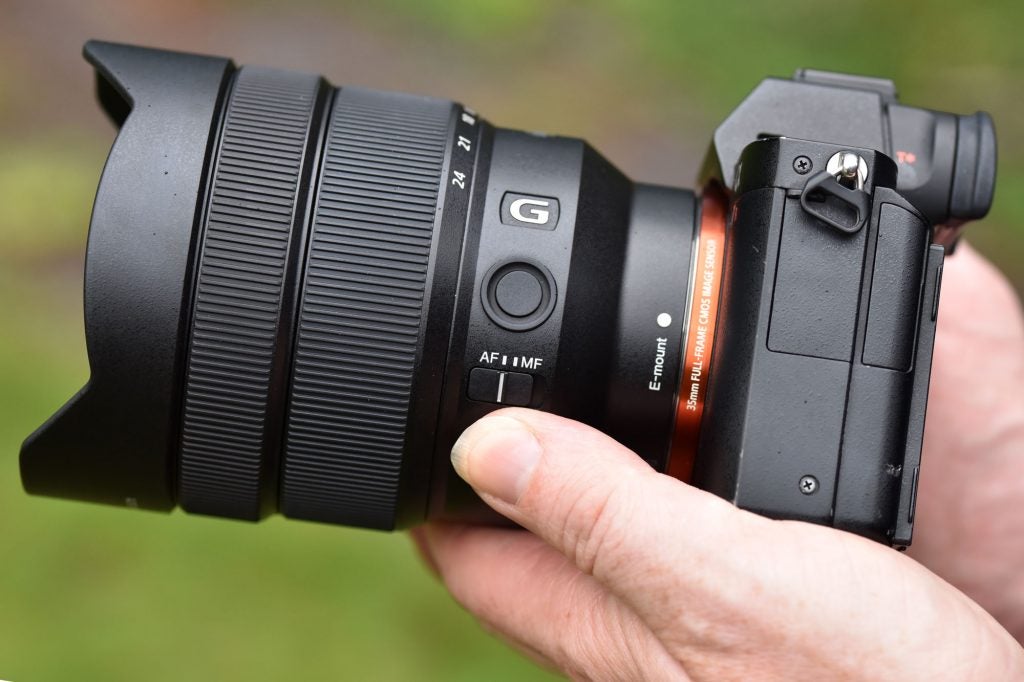 The zoom ring rotates smoothly through about 80 degrees between the 12 and 24mm positions, meaning it’s easy to make fine adjustments to your composition. Ahead of it, the slightly larger diameter manual focus ring is electronically – rather than mechanically – coupled to the lens’ focus group, and rotates continuously with no end-stops. On the side of the barrel, you’ll find a physical AF/MF switch and a large focus hold button. The latter’s function can be reassigned from the camera body, if you prefer.

For autofocus, Sony has chosen a Direct Drive Super Sonic Motor (DDSSM) to drive the lens’ focus group. This is fast and almost silent, meaning that it’s just as well suited to video work as it is to stills. On the Alpha 7R II used for testing, the focusing was also unerringly accurate – although, as always, you have to make sure you pay due care and attention to exactly where you place the AF point within the frame. 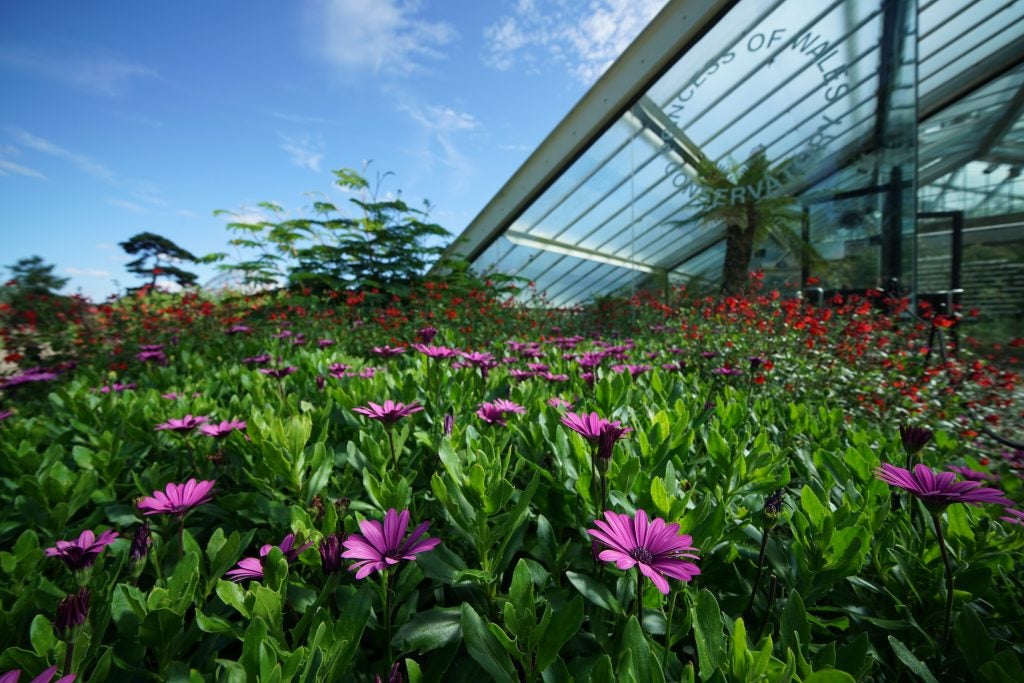 Manual focus is available when you need it, of course, and the electronically driven focusing allows precise control. There’s neither distance nor depth-of-field markings on the lens itself, but a basic distance scale is displayed in the viewfinder while you’re focusing. The camera’s usual focus aids are available, such as magnified view and focus peaking. If you set the focus mode to DMF then you can also get full-time manual override of autofocus.

Wide-angle zooms tend to be compromised in one way or another: it’s just the nature of trying to render a huge angle of view with minimal curvilinear distortion and a flat field of focus. Typically, I’d expect to see a combination of barrel distortion, chromatic aberration and smeared corner detail at larger apertures. However, Sony has a huge advantage compared to DSLR lens makers here, since mirrorless systems offer a greater degree of freedom in terms of lens design. As a result, the 12-24mm F4 isn’t only small – it’s pretty impressive optically, too. 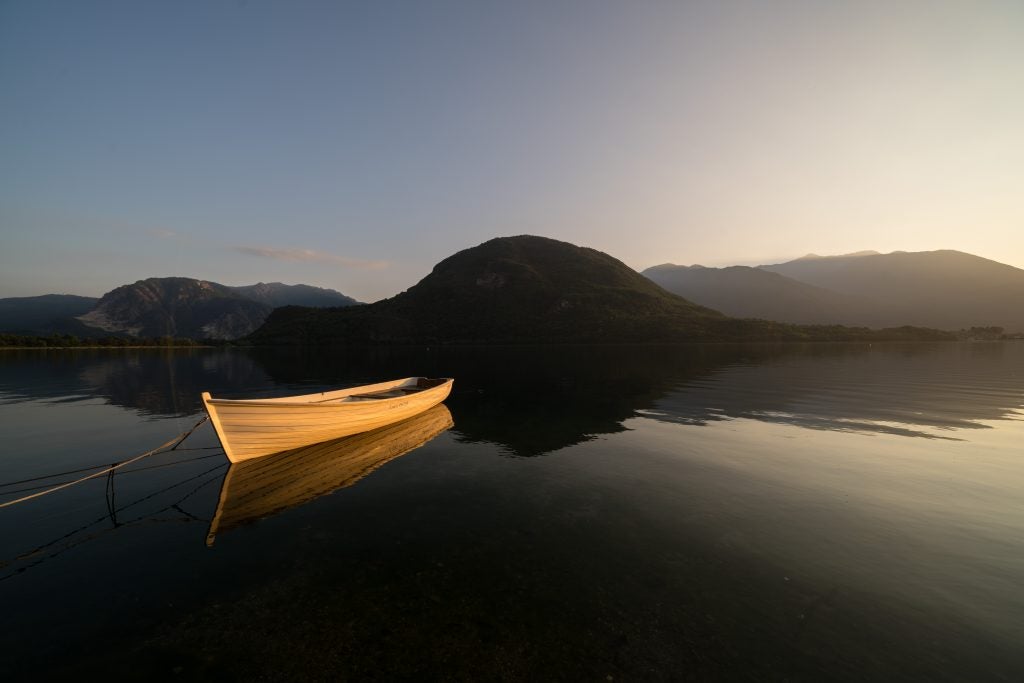 Examining my test shots, it’s clear that the lens is strikingly sharp in the centre, even at f/4. However, at its widest settings in particular, the corners will often show characteristic wide-angle ‘stretching’ and blurring, which only fully clears up around f/8-11. But these are entirely sensible working apertures that I’d normally be using on full-frame anyway, so I don’t see this as a big problem. 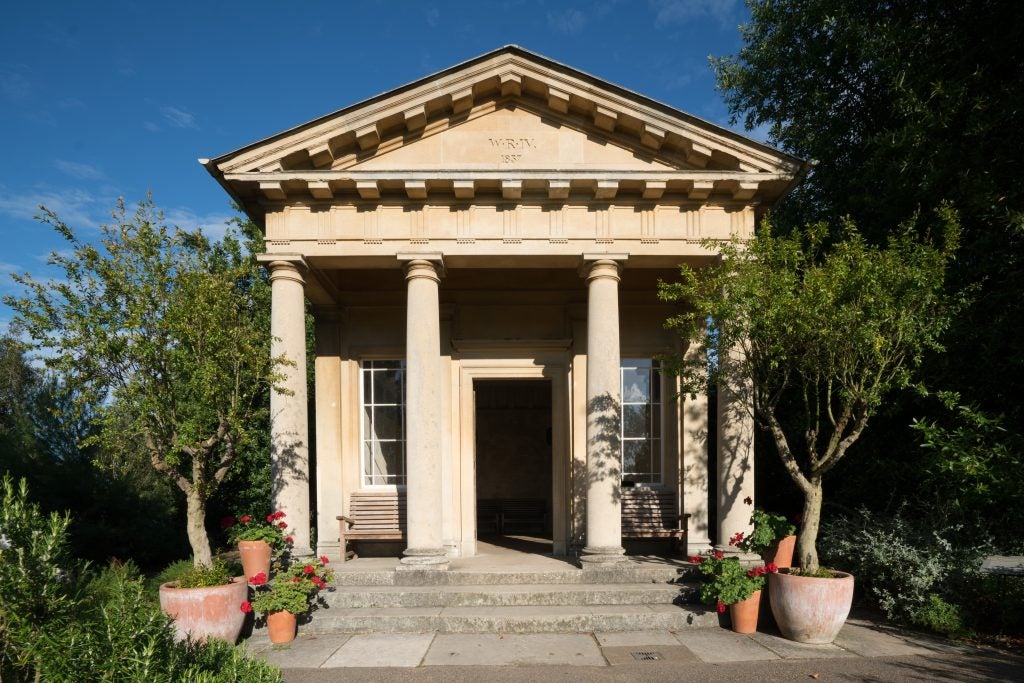 In this shot I avoided converging vertical by keeping the camera level at the 12mm setting, then cropping away the lower half of the frame. Sony A7R II, 12mm, 1/100sec at f/11, ISO 100

Some lateral chromatic aberration is visible in the form of complementary-coloured fringing towards the corners of the image, but even on the 42.4-megapixel Alpha 7 R II, it isn’t excessive – and it’s easy to correct in post-processing, too. Vignetting is prominent at wide angle, and never fully goes away on stopping down. But it’s much less of an issue on zooming in, and again can be easily corrected when necessary. 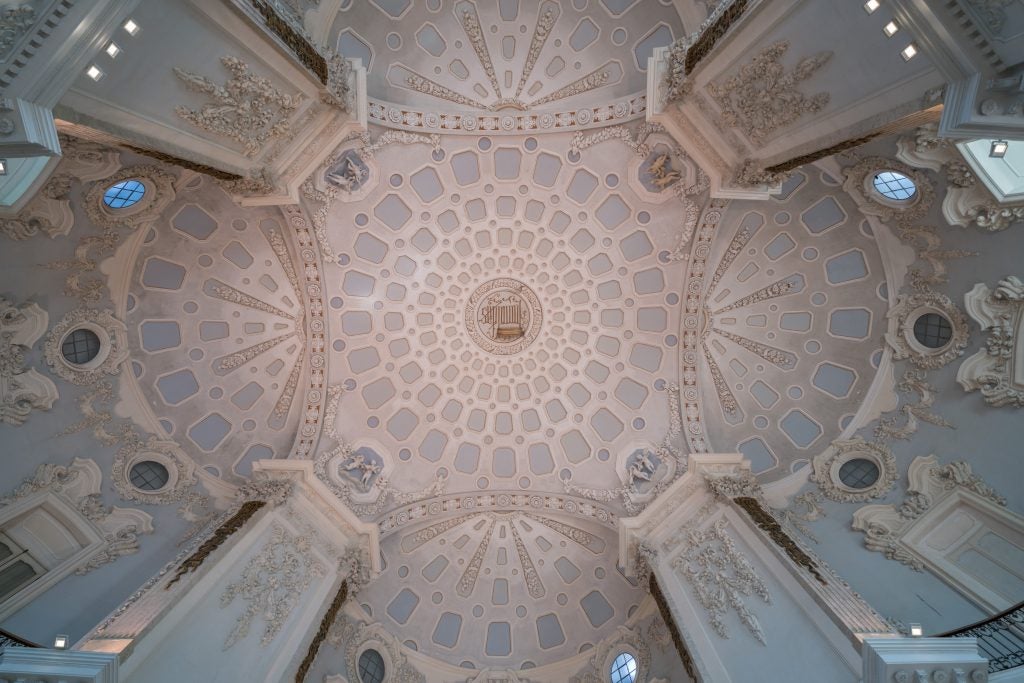 If you’re planning to use the lens to shoot interiors or architecture, however, you’ll perhaps be most concerned by its distortion characteristics. At wide angle it displays complex ‘moustache’ distortion – in other words, of the barrel-type towards the centre of the image but re-corrected to pincushion-type in the corners – such that straight lines are drawn as wavy along the top and bottom of the frame. This can make things difficult if you need those lines to be rendered straight in your images. Realistically, the only way is to use profiled corrections in your favourite Raw converter. Luckily, things get simpler on zooming in, and by 16mm the lens exhibits more easily correctable pincushion distortion. 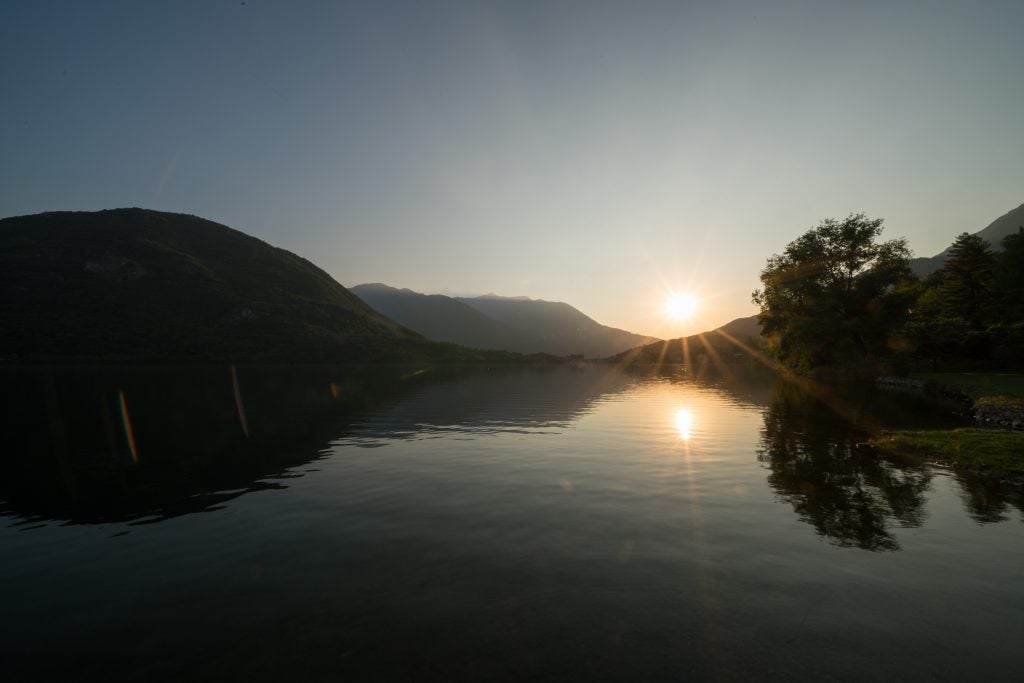 With a lens this wide, flare behaviour is also crucial, as you can often end up with the sun or other bright light sources in your shots. One noticeable feature of the 12-24mm is a signature flare pattern of bright hairline arcs concentric with the light source, which become more clearly defined on stopping down the aperture. You’ll also see nicely defined 14-point sunstars at small apertures. However, there’s a notable lack of image-degrading veiling flare, and on the whole the lens is well behaved in this respect.

According to our Image Engineering MTF tests, the lens is impressively sharp in the centre at maximum aperture. But, typically for such a wide lens, the corners of the image lag behind considerably, although the difference is probably exaggerated at the close distances needed for our chart testing. Best results are to be had at f/8. 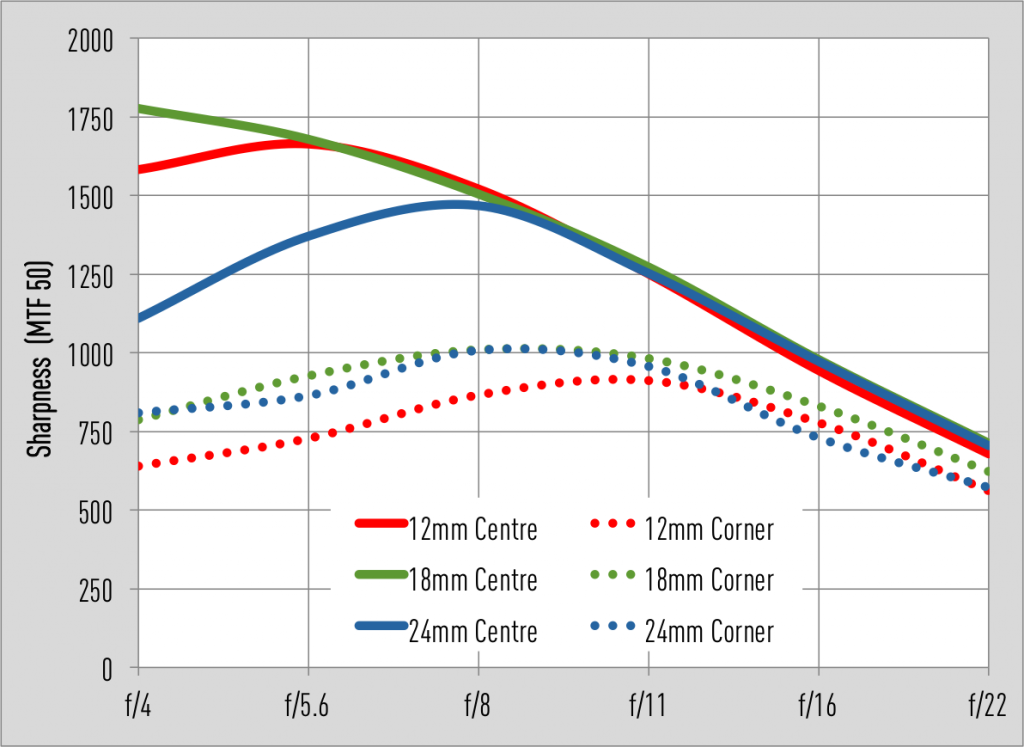 Even a cursory glance at our graphs reveals considerable vignetting at 12mm. Stopping the lens down to f/8 reduces the level to around 1.3 stops, but it doesn’t reduce any further at smaller apertures. The corner fall-off decreases significantly at longer focal lengths, and while it can still be visible at f/4, it becomes visually insignificant on stopping down to f/8. 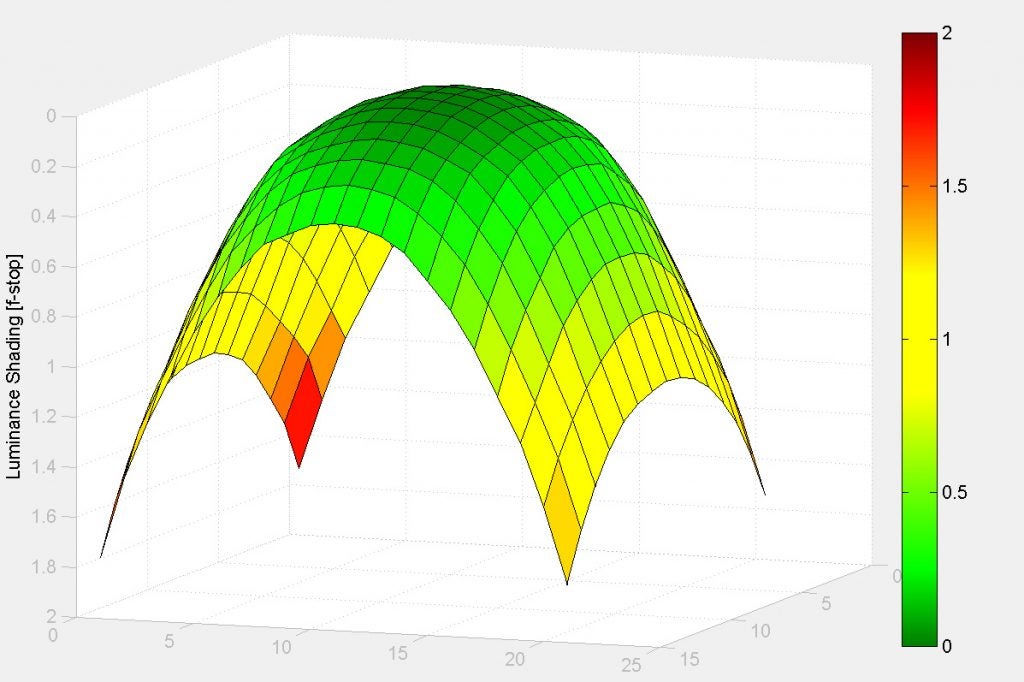 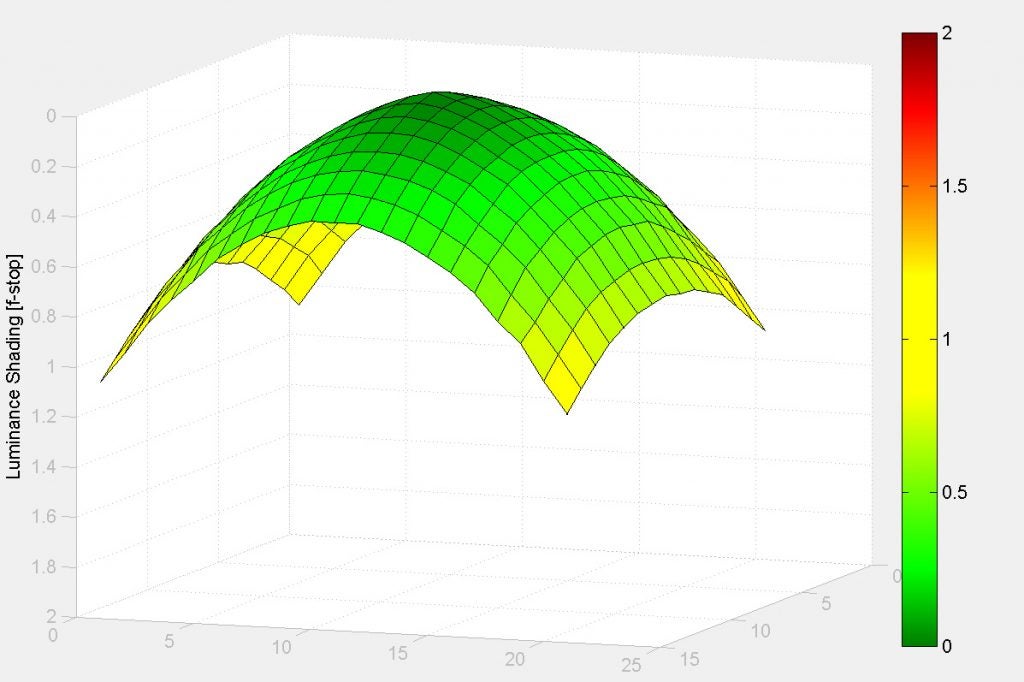 Typically for this kind of lens, the lens shows quite strong barrel distortion at its widest setting, turning to relatively mild pincushion on zooming past 14mm. It can be corrected in-camera using the Lens Compensation menu setting for shots that require straight lines to be rendered correctly. 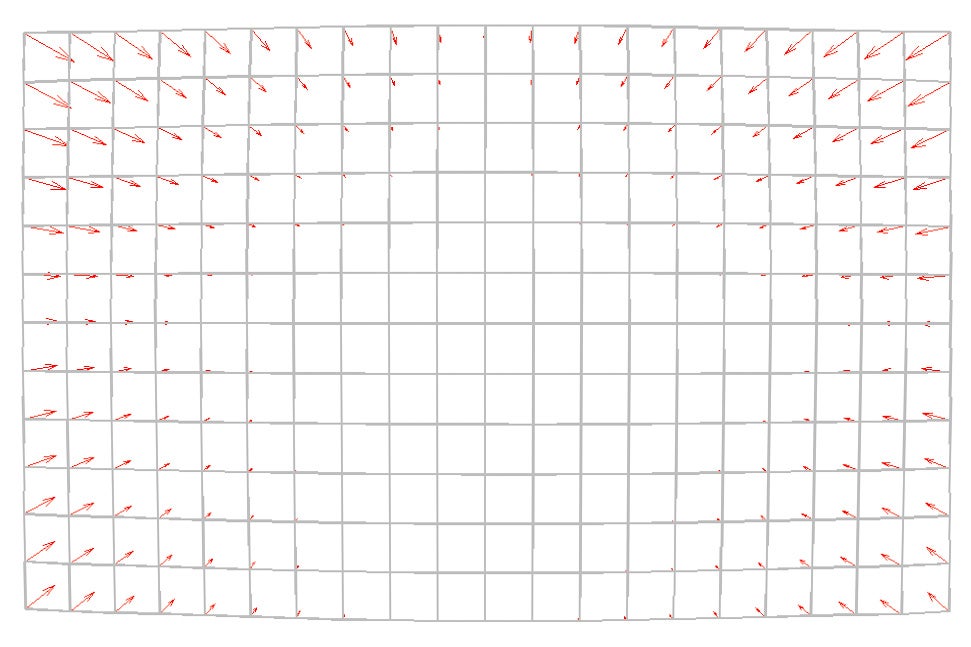 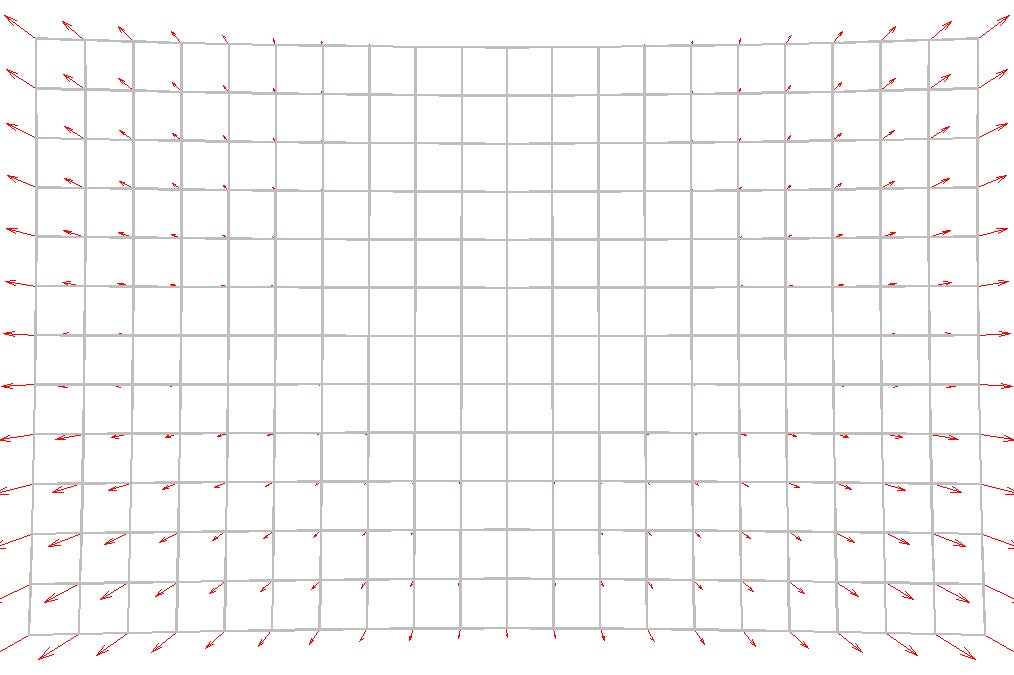 If you need an ultra wide-angle zoom for Sony full-frame mirrorless, then the FE 12-24mm F4 G is easy to recommend. Not only is it the sole native FE-mount option, but it’s optically excellent, and handles well too. In principle, you could use an adapted DSLR lens instead, but the Sony’s size and weight benefit means there’s little practical point. 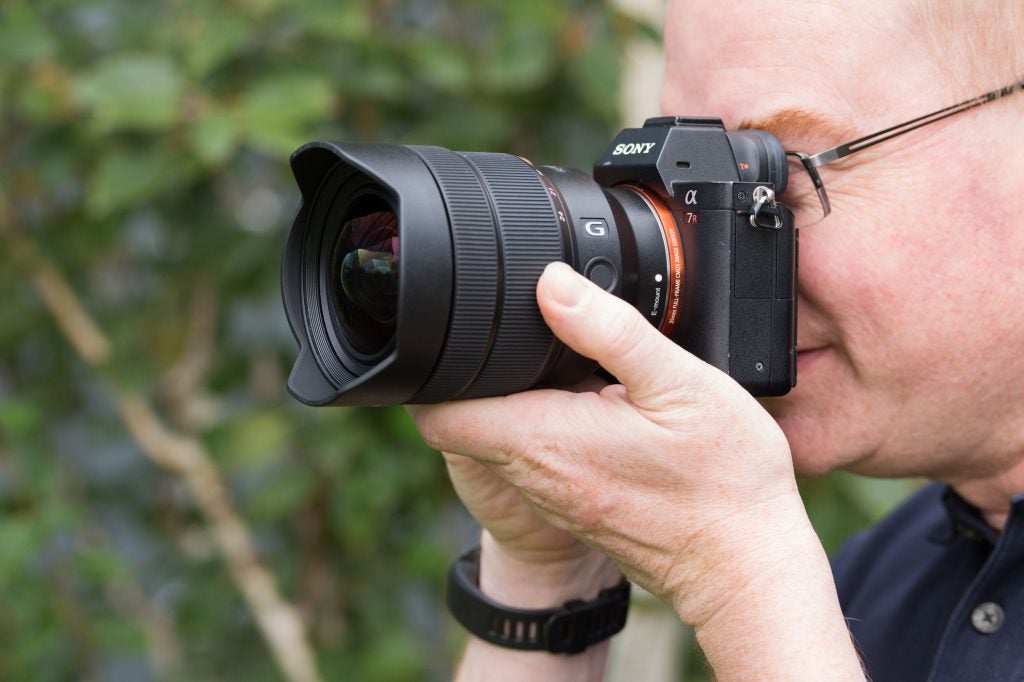 The bigger question, perhaps, is whether you need such a wide view. Such lenses are distinctly niche, and difficult to use effectively, placing great demands on your compositional skills.

If you’re simply looking for a wide zoom to complement a 24-70mm standard zoom, the FE 16-35mm F4 OSS is still a more practical choice. It’s optically stabilised, can accept filters, and is simply far more manageable to shoot with. Meanwhile, APS-C users will almost certainly get better value from the £700 E 10-18mm F4 OSS. That’s not to say the FE 12-24mm F4 G doesn’t have its place – just that it’s a niche, rather than mainstream option.

If you’re a Sony full-frame mirrorless user and know you can make good use of its immense field of view, the Sony FE 12-24mm F4 G will do you proud.