If you must have a phone with music playing abilities then Sony Ericsson’s range of Walkman handsets is likely to be at the top of your short list. It offers a wide range of such phones so it come as no surprise to see a slider enter the fray in the shape of the 3G, Tri-band W850i.


I’m quite a fan of the slider format. Good examples are small in the hand and are well featured The W850i meets the feature target well but it’s not all that petite.


It is 98mm tall, 47mm wide and 21mm thick and grows to around 130mm tall when slid open. These dimensions and its 116g weight make the other music slider phone I’ve looked at recently, the Nokia 5300 XpressMusic seem comparatively small. 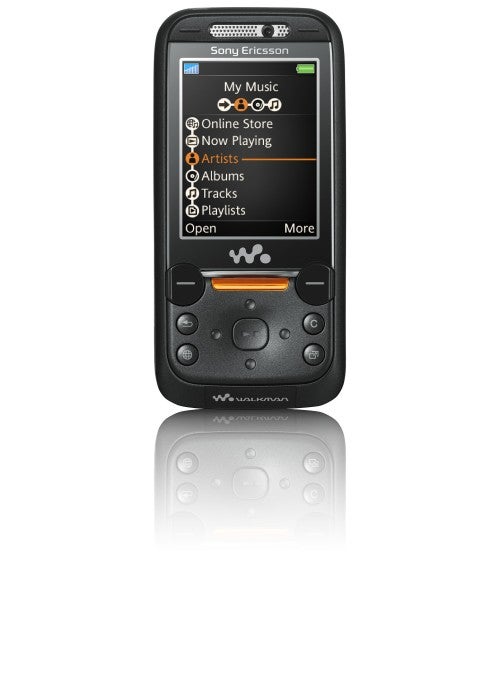 Still, Sony Ericsson certainly knows how to do a music focussed handset, and the W850i shows this off in several ways. It is rather nicely designed and in particular the front panel offers all the music controls you need. There are two enormous soft-menu buttons which, when the music player is active, enable you to easily stop and restart music and to get to the player menus.


Below these, where you might normally expect to see a navigation pad is an area with a single pause/play button in a thumb-convenient recess. This is surrounded by four dots which light up orange when the player is active, white in other circumstances. By pressing on or near these dots you can navigate the entire play queue or music library as well as go forward and backwards within the playing track. The four dots are not buttons, nor is the area around them touch sensitive. You effectively press the casing inwards to activate a button beneath it. The orange dots offer something to aim for with the thumb pad or nail and the system works very well. When you are not in the music player these four ‘buttons’ can be assigned to shortcuts, while the central button calls up the phone’s main menu.


There is a separate button dedicated to launching the music player. This is a long lozenge immediately beneath the screen. I found the way it pulsates with orange light as music plays very irritating and turning that feature off was one of my first tweaks of this handset.


Four more physical and quite small buttons sit on the outer edge of the front panel and these are Back, Internet, Cancel and Activity menu keys.

The Activity menu is a staple of Sony Ericsson’s Walkman phones and with it you can view alerts such as missed calls, access web bookmarks, close or jump to running applications and access a bevy of user defined shortcuts.


This is all good stuff, and it makes getting around all that is built into the Sony Ericsson W850i a breeze if you are prepared to personalise things to your liking. It can, though, all seem a little complex at first.


If you are wondering about the camera at this point a button on the right side of the phone launches it and also shoots photos while the volume rocker on the same side doubles for zooming. The clear and bright 240 x 320 pixel screen pops into landscape mode while you are using the camera. There is a front facing camera for video calls. 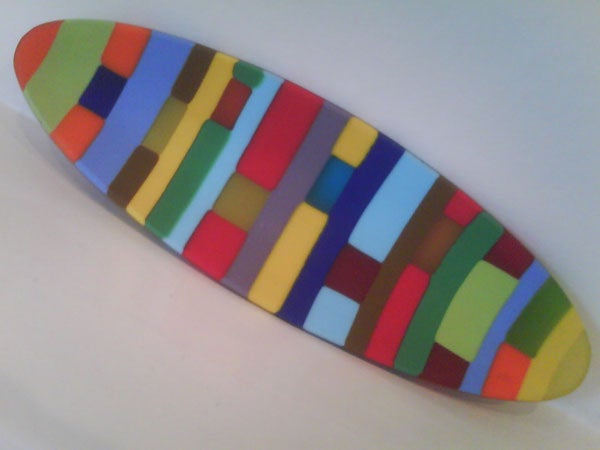 The main camera has a maximum image resolution of two megapixels, and there is a maximum 2.5x digital zoom. A self portrait mirror and LED flash unit sit next to the camera lens on the back of the phone.


The camera took reasonable, though far from exceptional, images. My standard reference photo – the coloured dish, shot indoors under ordinary household overhead lighting looks rather washed out. Photos taken outdoors were generally more vibrant, and all round colour capture was good.


The cat’s apricot colouring did not fade to a pinkish hue as it often does with mobile phone cameras. In addition the camera managed to capture fairly good shots of a moving object – again the cat is my example. 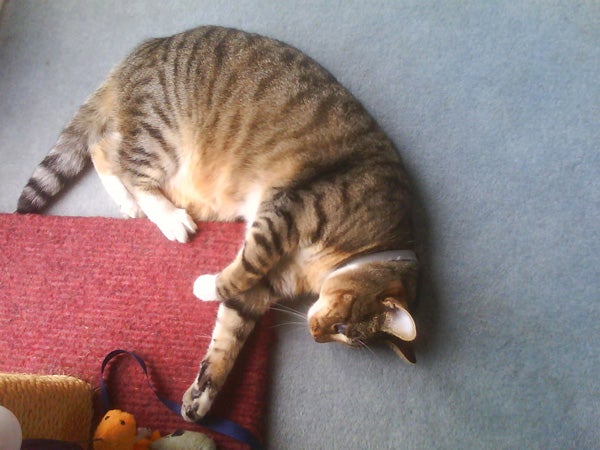 Disconcertingly, immediately after pressing the shutter button, the on-screen ‘freeze frame’ images of her were often blurred, but when the screen resolved to show the image that had actually been saved, blurring was often minimal and sometimes non existent. 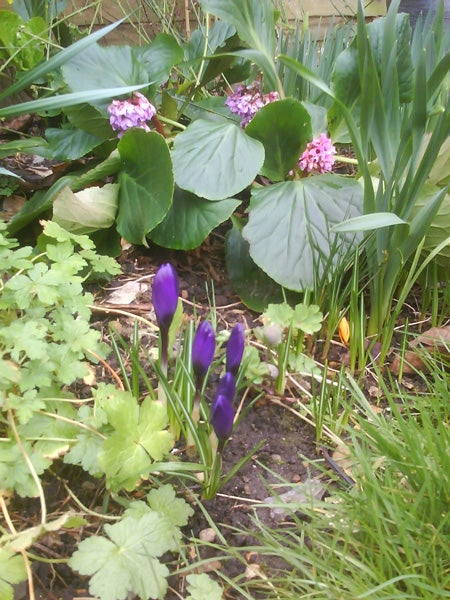 Battery life has to be great in any phone that claims to replace a separate music player. I’d say eleven hours and twenty minutes of continuous music from a full charge is pretty good for a mobile phone, but a separate dedicated music player will almost certainly better it.


When you tire of listening to music the built in FM radio can provide an alternative. You need to plug in Sony Ericsson’s headset to listen to the radio as it contains the FM antenna. The good news is that you don’t need to use Sony Ericsson’s earbuds. While these felt comfortable enough to wear, I found that by unplugging them from the 3.5mm jack just past the microphone, and using my own preferred stereo headphones I could improve sound quality.

You can’t have the headphones plugged in and charge the phone at the same time though as the two connectors share the same socket on the bottom of the handset.


The Memory Stick Duo slot is on the top edge of the casing, making it easy to get to for card swapping. Unfortunately, Sony Ericsson only sees fit to bundle a 32MB card with the phone. With just 16MB built-in you are going to need to invest in more memory to have any chance of using this phone as a portable music player. 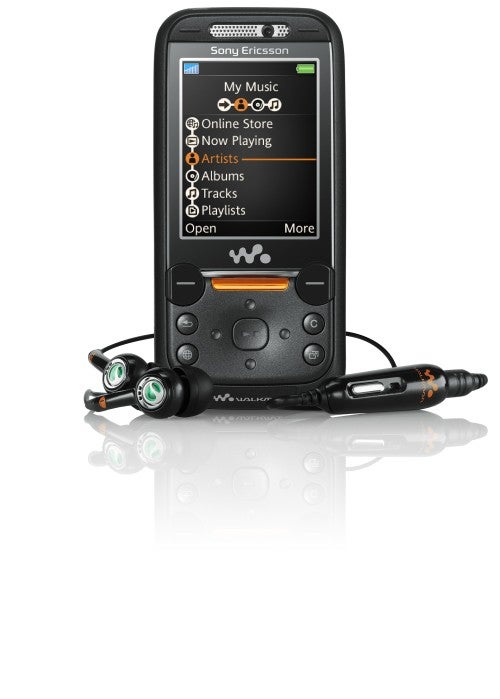 There is software for both entertainment and keeping organised built into this phone. There’s Photo blogging, VideoDJ, PhotoDJ and MusicDJ for editing media and the quite hilarious FaceWarp, which applys ‘humorous’ twists to photos – great for when your sitting with your mates in the pub.


Other software includes a calendar, task manager, alarm clock, calculator, note taker, stopwatch, timer and sound recorder. The Web browser is supplemented by an RSS feed reader. Email, MMS and SMS are of course all catered for, and Bluetooth and infra-red are both built in. The phone will send stereo to a suitable Bluetooth headset.


You get a USB cable for PC connection and the PC Suite software for sharing data with a PC including synchronising diary and contacts. Alternatively you can use the phone in USB Mass Storage mode if all you want to do is copy files between it and a PC. 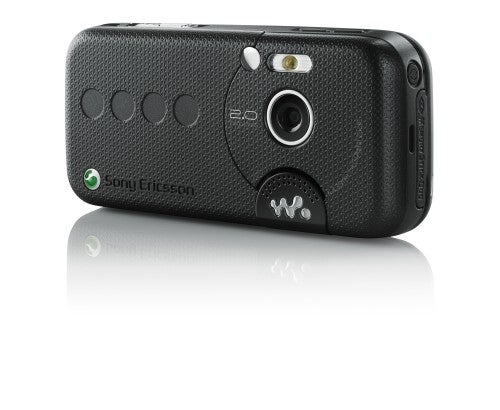 The camera flash can be set to stay on indefinitely or for one minute to act as a torch, or used in an SOS configuration (three long and three short flashes continuously).


There’s plenty of choice right now in the music phone market, such as the already mentioned Nokia 5300 XpressMusic and the very tiny Samsung SGH-X830, both of which have some good music control features. The W850i doesn’t beat either on size and sits midway between the two on battery life but it’s the only one that has 3G, which could swing it for some.