The Sony Ericsson Vivaz was the first smartphone to feature 720p video recording, but amongst other things it suffered from a very poor on-screen keyboard that made email, messaging, and Internet browsingsomewhat tedious affairs. Hoping to rectify this is the Vivaz Ppro, which adds a physical keyboard into the mix.

Just like the Vivaz, the Vivaz Pro is a surprisingly slim and sleek device. Partly this is due to the simple fact it is smaller than many high-end touchscreen smartphones, with a screen just 3.2-inches from corner to corner. However, at just 15mm thick it ”is” one of the thinnest slider phones we’ve seen. Tapered ends also help to make this phone feel even slighter than it actually is.


There are some nice design touches as well. The front buttons, which are incorporated into a silver strip along the bottom, are mirrored by a symmetrical silver strip at the top, while the Sony Ericsson logo is small enough to remain unobtrusive. Likewise, we like the way all the features on the back are lined up, keeping the phone from looking cluttered despite a fair number of potential eyesores. 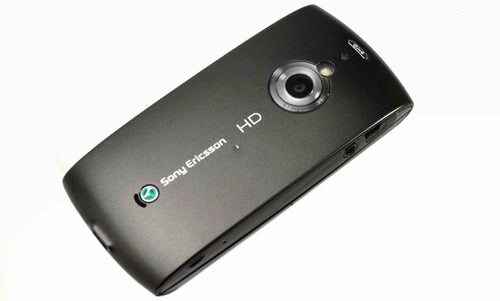 Sadly the pleasing design isn’t matched by build quality. The main disappointment is the screen, which because it uses resistive touch sensing technology is finished in flexible plastic that scratches easily and looks rather crude. Likewise the keyboard is surrounded by clear plastic that wobbles and flexes beneath your fingers as you type. One consequence of all this plastic is the phone remains quite light at 117g, but for an extra 20g or so we’d have preferred to see a capacitive glass screen and a more solid keyboard surround.


Other immediate concerns are the position of the headphone socket, which being on the side means any headphones without an angled jack will snag on your pockets, and the microUSB data transfer and charging socket, which is covered by a plastic flap. While we can appreciate the merits of protecting the socket from dirt ingress and knocks, these plastic flaps are a right pain when you actually want to connect a cable. As such we prefer either to lose the cover altogether, like on the HTC Desire, or have a sliding door, like on the Samsung Galaxy S. 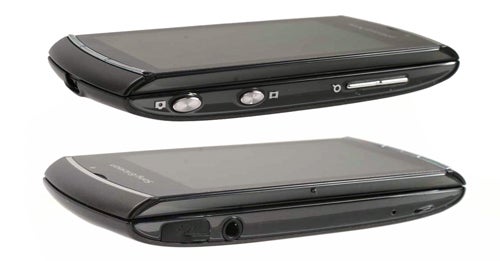 On-board storage is limited to just 75MB, but a microSD slot sits under the backplate, giving you the option of adding up to 32GB more storage – you get an 8GB card in the box. Thankfully you don’t have to remove the battery to add or remove a card.

In use the Vivaz Pro’s screen is good if unexceptional. Thanks to a fairly high resolution (360 x 640) for its size, it has above average sharpness and it produces strong yet natural looking colours. Also, despite being an LCD panel, viewing angles are also very good. As such it’s generally nice to use with the only ”major” caveat being the amount of scrolling around required because of its small size. Its only other downside is the unimpressive contrast level, and the quality of its blacks. Consequently, videos and pictures don’t really leap out of the screen and look a bit muted. 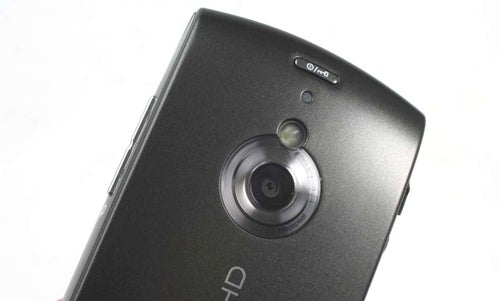 Muted certainly isn’t the word we’d use to describe the pictures this phone takes, though. Admittedly we took these photos on a particularly bright and hot day so the sky was bluer than we’re used to, but it certainly wasn’t as blue as in these pictures. Neither was it quite so mottled and grainy. Ultimately, despite the Vivaz Pro’s focus on its camera, it is in fact entirely average – fine for Facebook, but poor for printing. 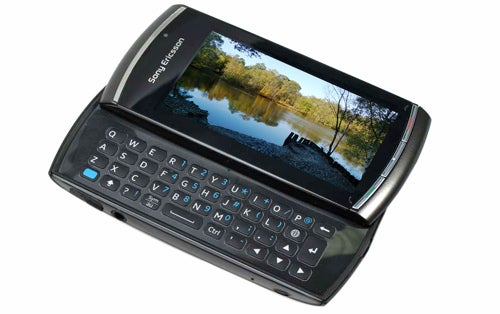 Likewise, its HD video recording abilities are now far from unique, with both the Apple iPhone 4 and Samsung Wave sharing the same basic hardware. In fact, thanks to the iPhone 4’s on-board editing abilities, the Vivaz Pro has now fallen behind. That said, there are still few handsets that can record in 720p and it is still markedly better footage than you’ll find on non-HD phones. 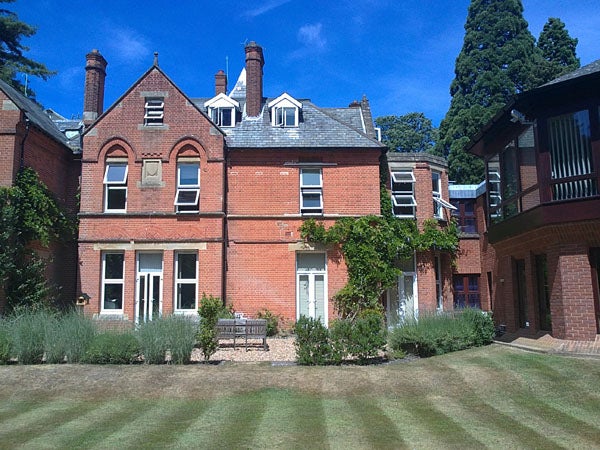 One oddity with the camera is that, unlike the majority of handsets, the Vivaz Pro doesn’t use a single shutter button and a software based switch for flipping between video and stills modes. Instead it has two hardware buttons. These sound fine in theory, but in practice it constantly catches you out as you go to start recording some video and press the camera button instead and end up switching modes. At least it has a button for the camera, though, unlike the iPhone 4.

We mentioned at the start of this review that the Vivaz suffered from a rather poor on-screen keyboard amongst other things, and it’s now that we get to those other things. You see, the keyboard was merely a symptom of this phone’s generally poor operating system. It’s based on Symbian S60, which as we’ve pointed out many times before is a horrible touchscreen operating system. 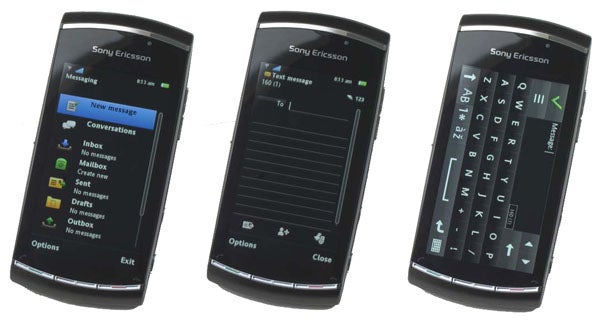 For a start, it just looks drab and boxy. However, it’s not just the simple styling of it – indeed we still rather like the look of RIM’s utilitarian BlackberryOS – it’s the way you interact with it. From the fact that scrolling requires you to use a scroll bar (you can’t simply put your finger anywhere on the screen and move it about) to the way the text input box fills the entire screen, it just feels like what it is – a botch job, a sticking plaster of an update to an operating system that simply isn’t suited to touchscreen input. 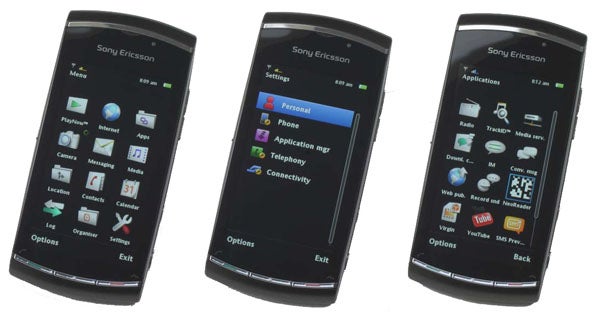 Sony Ericsson has made some changes, including adding multiple desktops and a custom media interface. However, the multiple desktops have fixed content so you can’t just add shortcuts and widgets to your favourite programs and, just as with the rest of the operating system, sliding your finger across from one to the other doesn’t elicit a smooth intuitive response. Instead it does nothing until you’ve finished moving then performs a rather crude sliding motion. As for the media interface, it is quite nice, providing a simple, intuitive interface for browsing your music, photos, and videos. But it’s a fairly small plus point in the grand scheme of things.


The web browser is okay at rendering web pages and is reasonably fast, but all the interface aspects of it are infuriatingly clunky. As for email, it is supported but again it’s let down by an unwieldy interface, likewise the SMS interface. Of course this is where the slideout keyboard is supposed to have helped, but sadly not only does it not come anywhere near close enough to making up for the other failings of this phone, it doesn’t actually make for a very nice typing experience anyway. It’s not the worst we’ve seen, but the layout has a few annoyances and the action is only okay. 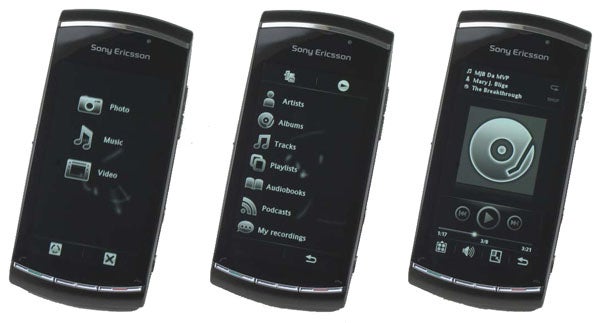 If you haven’t been put off already then the fact that this phone isn’t particularly great at making calls should seal the deal for you. With no noise cancelling it picks up background noise easily, making it difficult for the person you’re calling to hear what you’re saying. Battery life is also nothing to write home about with a couple of days being about the most you’ll get out of it in normal use.


Looking finally at price, the Sony Ericsson Vivaz Pro is just about on the money in terms of build quality and features. However with such a clunky interface we’d only consider this phone if available at bargain basement prices (less than £200 on PAYG and on free on contracts of £15pm or less).


There’s no two ways about it, this phone is far from one we can recommend. We like the styling and form factor and were it to have a decent touchscreen and run Android or some other half decent operating system, we’d be more interested. However, with Symbian S60 running the show, the Sony Ericsson Vivaz Pro is positively infuriating to use.