The Sony DSC-TX20 is the latest waterproof camera on the market. It should be perfect for those looking to take snaps underwater, or those forever spilling pints on themselves, but it’s also very similar to its predecessor. Like the Sony DSC-TX10, it has a 16.2-megapixel, 1/2.3in Exmor CMOS sensor and a 4x optical zoom. If you have Sony’s last waterproof camera, it’s not worth the upgrade. But is it worth buying for new buyers looking to get moist?

If you want a camera to take out in the rain or underwater, but don’t want to use a clumsy case, the Sony DSC-TX20 is a safe bet. Sony says it can withstand submersion in 5m of water, a drop from 1.5m height, is dustproof and can handle temperatures of minus 10 degrees Celsius. That’s equivalent to IP68 certification, the highest standard grade you can get. 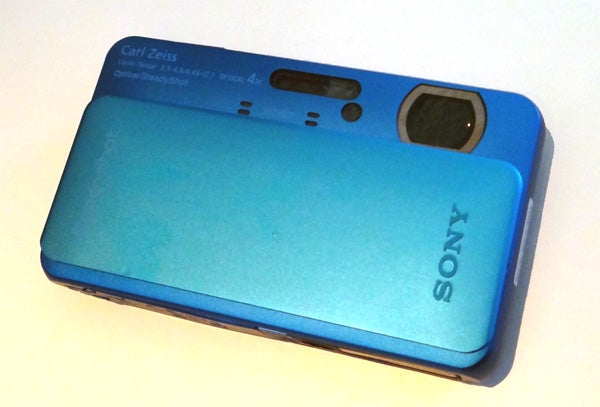 To attain these impressive stats, the DSC-TX20 uses rubber seals at each of its openings. These are all entirely standard aside from their waterproof cred. There’s one for the battery and SD card slot, and another for the HDMI output and USB socket. Fail to close either of these properly and submerge the camera in water and – probably – it’ll be game over.

The major benefit of a camera like the Sony DSC-TX20 over a waterproofing accessory is that it’s small, easy-to-use and doesn’t look ridiculous. At the camera’s launch, we only got to see the blue and black versions of the device, but there are also two-tone editions – orange/silver and green/silver. 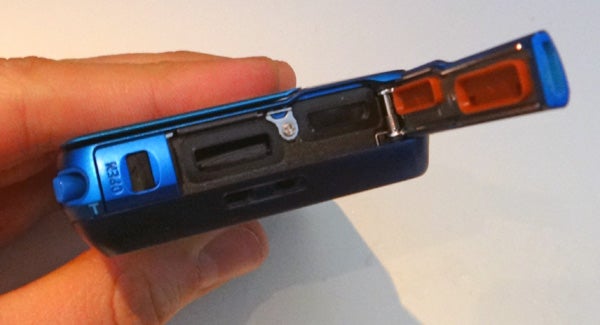 The Sony DSC-TX20 has a metal-finish body, with a slide-up front panel that covers the lens, flash and stereo mic grilles when the camera’s not in-use. This front panel has to be manipulated manually – it hasn’t suddenly become automatic since last year’s DSC-TX10. Although we didn’t get to thoroughly test its shock-proof and waterproof claims during our hands-on, the tough-feeling body gave us no cause for doubt. It’s just under 18mm thick too, and easily small enough to slip into most trouser pockets. 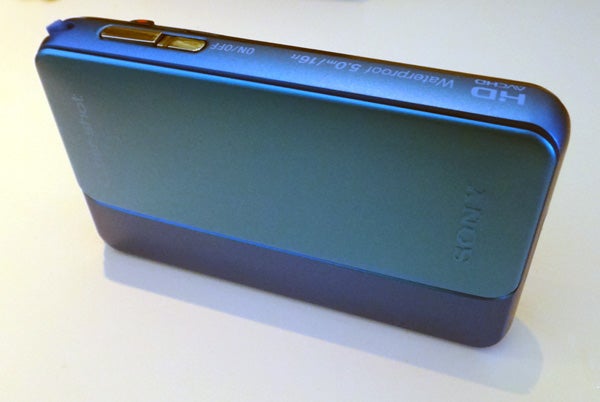 However, there is one thing that trips-up its usefulness in situations that make use of its waterproof skills. Its 3in 921k-dot screen uses a good-quality display, but the capacitive touch layer means its touchscreen controls will become useless in heavy rainfall or underwater.

Capacitive touchscreens use conduction to sense points of contact, and are naturally tripped-up by the conductive properties of H2O. You can use the camera in watery conditions, but it severely cuts-down how many of the Sony DSC-TX20’s features you have access to.

The Sony DSC-TX20 uses a CMOS Exmor R 16.2-megapixel sensor. However, since this was the same line-up that featured in the previous DSC-TX10, we have to ask – what’s the big deal?

The biggest differences between the two seem to be in software rather than hardware. In common with many recent mid-range digital cameras, Sony is keen to big-up the DSC-TX20’s speed and alternative modes. 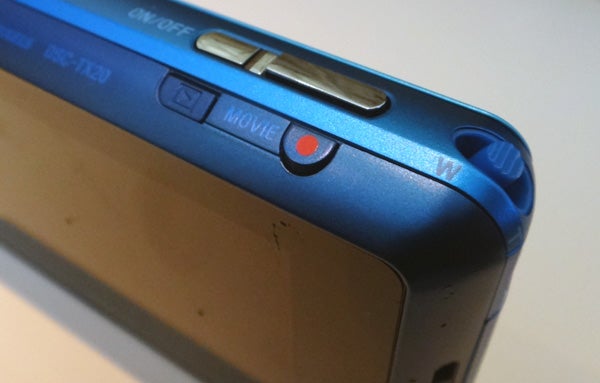 Sony claims that the DSC-TX20 can focus-in on a scene in 0.13 seconds in daylight and 0.25 in low light. Without a stopwatch or lightning-speed reflexes to call upon, we couldn’t test this, but focusing was both quick and reliable. And the image stabilisation keeps carelessly-taken zoomed-in shots sharp as long as there’s sufficient light. However, the shutter button is a little spongy – lacking the clear distinction between the focus and shutter stages that many photographers will be after.

This “lite” approach to controls is seen throughout the DSC-TX20. The zoom control is handy, sitting on the edge of the camera, but is a dinky little nubbin that is easy to lose grip of in the heat of the moment. There’s also no EVF, and no manual physical controls. 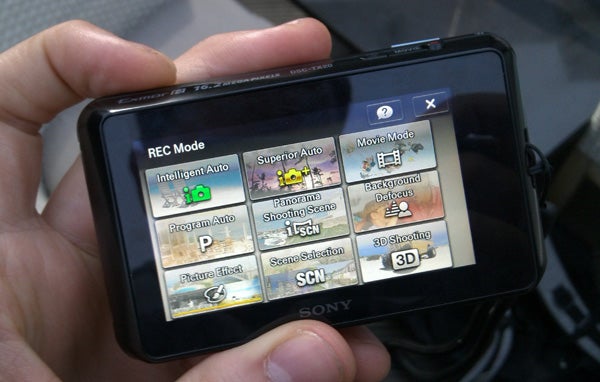 The touch-based interface is friendly-looking

These sort of control compromises tell you a lot of what the camera is about. It’s for keen photographers wanting a camera that can produce water-bound, decent-quality images without the compromises of a waterproof case, or those who want a degree of “lifestyle” flexibility and are willing to trade off the extra control non-waterproof cameras at the same price can provide. Let’s not forget – the Sony DSC-TX20 isn’t cheap. 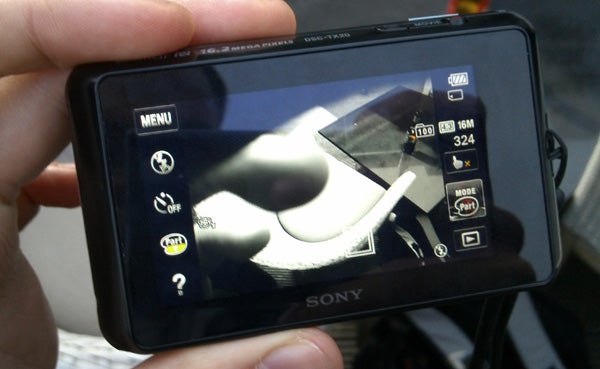 However, it does offer plenty of modes that improve its out-and-about skills. The panorama option has been boosted since the DSC-TX10’s entry, offering solid panoramas of up to 360 degrees, and there’s a comprehensive selection of fun modes. These include “background blur”, toy mode, a hipstamatic-style mode, tilt-shift, a handful of other “fun modes” and a couple of ultra-accessible auto modes. 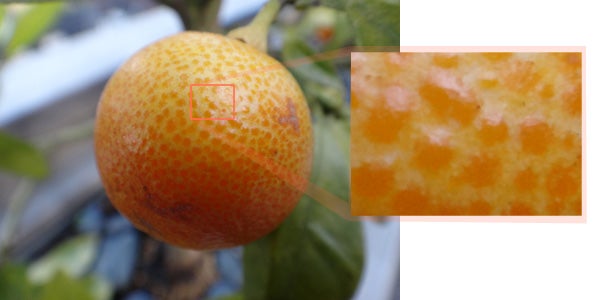 There is a macro mode, but our results were unremarkable

There’s plenty of potential for photo hijinx, but equally a few are quite limited. In the colour pop mode, you can only choose between four colours – rather than selecting a colour or area using the capacitive touchscreen – and the DSC-TX20’s macro abilities appear to be a little limited. Getting right up-close with subjects, detail captured was unimpressive compared with some similarly-priced advanced compacts. However, we’ll test this more fully in our review. 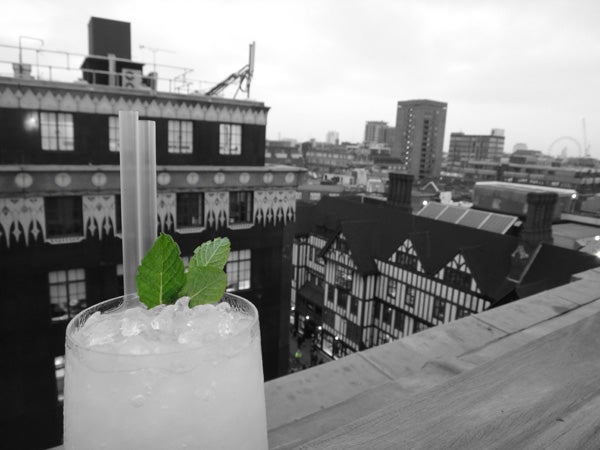 The colour isolating mode can provide some very neat results. However, it is limited. 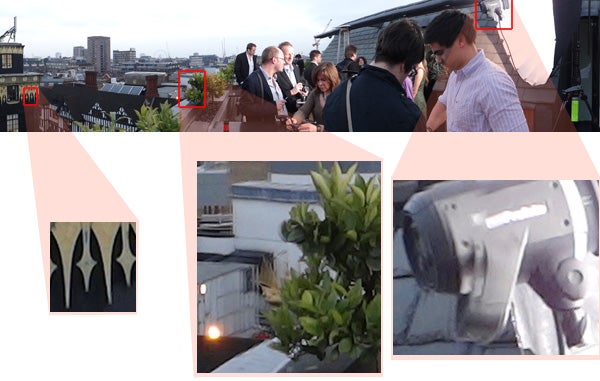 The panorama mode is strong, with seam-free results if your motion is smooth enough

In low-light conditions, performance was decent. Noise increased significantly, but images remained mostly free of chromatic aberration and purple fringing – evidence of the improvements made in small-sensor cameras like this in recent years.

The Sony DSC-TX20 is a largely iterative update to last year’s TX-10 model. Waterproofing hasn’t improved, and neither has the sensor’s specs, but apparently increased focusing speed and mode flexibility make it the better bet. Treading water? Perhaps, but then that’s what this camera is all about.