Our growing obsession with design and aesthetics has created a huge demand for 2.1-channel systems, because they offer you high-quality home cinema sound without having to clutter up your living room with speakers and cables. Such is their allure that people are willing to sacrifice the thrill of true 5.1-channel surround sound for the sake of minimalism and domestic harmony.


And freed from the shackles of the traditional 5.1-system approach, most manufacturers take it as a green light to let their creative juices flow freely and come up with some of the most gorgeous-looking home cinema kit on the market.

A perfect example of this is Sony’s latest 2.1-channel system, the DAV-F200. The main unit, which houses a DVD player, radio tuner and audio processing electronics, oozes 21st century chic with a vertical stand-mounted arrangement (it’s also wall-mountable with an optional bracket) and a sleek black finish that takes up most of the front panel. A very cool white light illuminates the playback controls on the silver section underneath, while the discreet disc slot is located on the right hand side. Pure class. 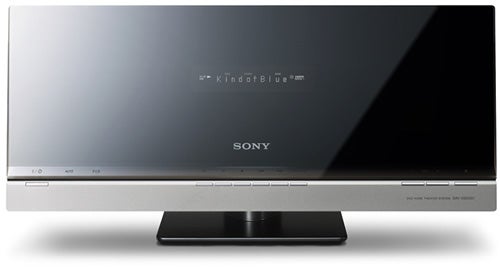 The black finished front speakers are slim, compact and fit in nicely with the overall look, while the bulky subwoofer is attractive by usual subwoofer standards despite being bigger than the other components put together.


On the back of the main unit is a removable panel that conceals a very useful array of connections. The HDMI port offers 576p, 720p, 1080i and 1080p output thanks to the unit’s video upscaling capabilities, but for non-HDMI equipped displays you’ll also find component and composite outputs. 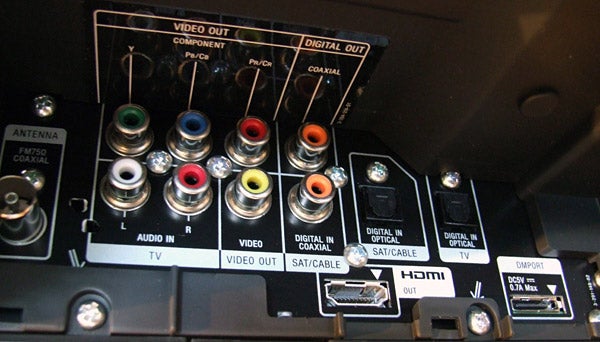 On the audio side, it’s very pleasing to see that Sony has provided an optical digital audio input, enabling you to feed in a signal from your Sky + box and enjoy Dolby Digital sound (albeit in 2.1). Also on board are coaxial input and output, plus a pair of analogue phonos for other external audio gear. 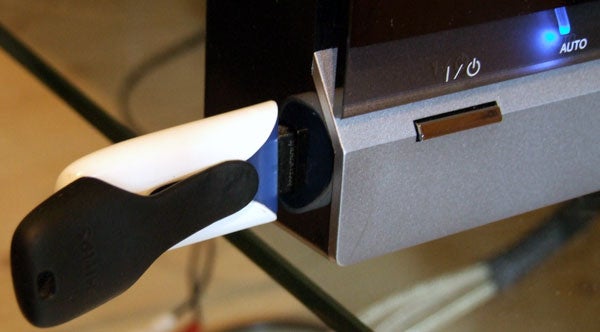 The unit’s connectivity expands further with a USB port that lets you connect memory devices, mobile phones or audio players and play MP3, WMA or AAC audio files, as well as JPEG photos. You’ll also find Bluetooth and Wi-Fi adapters as well as Sony’s DMPORT on the rear for connecting modular adapters for external devices like Walkman, iPod and Sony Ericsson mobile phones.

The DAV-F200 comes equipped with the obligatory virtual surround mode, S-Force Front Surround, while inside the powered subwoofer the S-Master digital amplifier generates a mighty 405W of audio power (135W per channel). Other audio features include a range of decoding modes, including 2ch Stereo, Wide Stage, and Portable Audio which enhances the sound when playing back MP3s via USB or DMPORT.


It’s also pleasing to see that the DAV-F200 plays DivX files from DVD or CD, and supplies a registration code for video-on-demand content bought online. And, if the idea of having more than one remote chills you to your very core, then you’ll be thrilled to hear that BRAVIA Sync lets you control a Sony TV and this system using one remote. 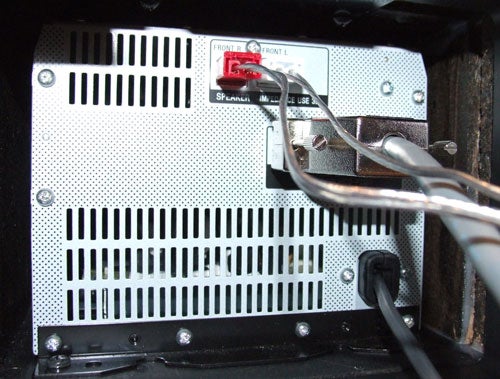 With so few components involved, setting up the system is a piece of cake. The main unit connects to the subwoofer using a single cable, while the speakers also connect to sturdy plug terminals on the underside of the sub. The main unit also features a useful cable tidy system to maintain the minimal aesthetic.


Power up the unit and you’re greeted by a stylish Sony splashscreen. Hit Display and it presents a choice of Quick and Custom setup menus, the former detailing only the key tweaks while the latter lets you configure the whole shebang. You can set the HDMI resolution to Auto (which will select 1080p output if your TV supports it) or force it to output in 1080i, 720p or 576p, and unusually you can select whether JPEGs are displayed in SD or HD. With only three speakers to worry about, the audio setup options are sparse, only allowing you to set the levels of each speaker from -6dB up to +6dB, but the fact that you can’t set them as the disc is playing means there’s an element of guesswork involved. 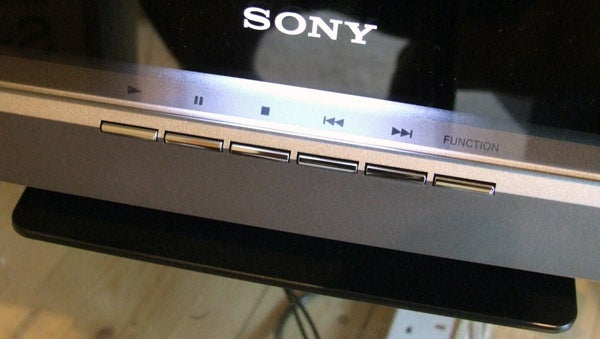 On the whole the unit’s operating system is superb – speedy, logically laid out and easy on the eye. The remote is also intelligently designed, although it’s on the large side and crammed with buttons, plus the multiple ‘Menu’ keys get a little misleading when trying to locate the setup screen.


As for its audio performance, Sony says that the DAV-F200 has been tuned by the same team behind its high-end AV receivers, so we were expecting great things from this compact system, and it does not disappoint. To test its mettle, we slipped the quintessential Arnie action-fest ”Predator” into the disc slot, selected the awesome DTS track and were immediately pinned in our seat by the sheer power produced by the impressive S-Master amp.

The key factor in this kick-ass audio performance is the monstrous bass output from the excellent sub, which has enough muscle and presence to fill the room but not at the expense of control or cohesion. The scene early in the movie when Arnie’s team raids a jungle base is packed with OTT explosions, and the F200 delivers them with staggering force and intensity. Once or twice it sounded a little flabby but as 2.1 system subs go, it’s the real deal.


This is backed up by a polished performance from the main speakers, which deliver midrange and top-end frequencies with surprising transparency. Speech sounds authentic, with Arnie’s classic one-liners (“Stick around”) losing none of their comical impact during raucous action scenes, while the rasping shots from Arnie’s rifle are delivered with a visceral punch. The movie’s score also comes alive with superb reproduction of the pulsating jungle drums and piercing brass stabs.

Inevitably, the lack of rear channels makes the ”Predator” track sound only half as enthralling as it would be on a decent 5.1 system, and despite the best efforts of S-Force Front Surround there’s very little width to the soundstage. If you want to be enveloped by sound when watching a movie, then we suggest making room for a 5.1 system.


However, if you’re looking for a system that doubles up nicely as a hi-fi, the F200 could be just the ticket. It handled a range of CDs with aplomb, from the floaty jazz-pop of Amy Winehouse’s ”Frank” to the clanging guitars of Coldplay’s ”Viva La Vida”, and when pushed hard it showed no signs of clipping or distortion.


The DAV-F200 also produces top-drawer pictures, as demonstrated by ”Star Wars: Episode III’s” crisp transfer. The abundant CG detail is sharply reproduced and steady, while colours are strongly saturated but look natural at all times. The lack of upscaling artefacts demonstrates the quality of the system’s video processing, which produces richly textured picture quality on a 1080p TV.


Most people will probably snap up the DAV-F200 purely on the basis of its strikingly handsome looks, but those who care equally about AV quality can rest assured that it’s much more than just a pretty face. The picture and sound quality is of the highest order, packing a punch when it comes to movie playback, and there are enough features on board to keep technophiles happy for years to come. It’s no match for a proper 5.1-channel system but those seeking a space-saving solution will find the DAV-F200 to be an excellent alternative – and at under £300 online it’s surprisingly affordable to boot.