Despite the growing popularity of Blu-ray, there are still a huge number of people who have no interest whatsoever in upgrading to hi-def, preferring instead to make the most of their existing DVD collections. If you’re one of those people then there’s a wide selection of 1080p all-in-one systems to choose from, which get you an upscaling DVD deck, amplifier and 5.1-channel speaker system in one fell swoop for a rock-bottom price. But while they’re affordable and hugely convenient, all too often they cut corners when it comes to performance – here’s hoping Sony’s sub-£200 DAV-DZ280 can defy our expectations.

Inside the surprisingly compact box is a main control unit, which features the DVD player, FM radio tuner and 850W S-Master digital amplifier (which supplies 142W to each of the five sats and 140W to the sub). It’s interestingly styled with a sharp, angular front panel that slopes inward at both ends, a prominent volume dial on the right and a display panel with small digits that make it a little difficult to read. It’s tasteful enough, but won’t dazzle onlookers in the same way as a Samsung or LG system and the build quality is on the hollow, plasticky side – but at this price we didn’t expect Bang and Olufsen levels of opulence.


The unit’s front panel boasts a smattering of sockets, including minijack ports for headphones and the auto calibration setup mic. There’s also a USB port, which not only facilitates playback of digital media content but also lets you rip tracks from CD onto a USB flash drive in MP3 format. This is a potentially handy feature for anyone who hates relying on their PC for ripping, but the lack of automatic tagging makes it more hassle than it’s worth.

Anyone hoping to use this system as a switching centre for the rest of their AV kit should look elsewhere – the rear panel is disappointingly barren, sporting no audio inputs whatsoever and only a couple of video outputs. There’s an HDMI output for passing on all-digital video (regular or upscaled) to your TV and an RGB-capable SCART output, but that’s yer lot. There is, however, a DM Port connection that allows you to connect the supplied iPod/iPhone dock (or other optional adapters for MP3 players, Bluetooth devices and mobile phones) and listen to your digital music library through the system. Completing the connections are an FM antenna and colour-coded speaker terminals.


Also in the box are four bookshelf-style front/rear satellites, which are nothing special to look at and boast undesirable springclip terminals, but a hands-on inspection reveals better build quality than many similarly-priced systems. They’re joined by a horizontal centre speaker and a small passive subwoofer, which again is plain-looking but can be tucked out of sight.

Looking at the feature list, SACD playback is a real highlight. This is a surprising but extremely welcome feature to find on such a cheap system, and means you can enjoy hi-res, multichannel music. The system decodes Dolby Digital and DTS, offers Dolby Pro Logic II processing and provides a few sound enhancements: Dynamic Bass boosts low frequency effects; Movie and Music modes tailor the sound frequencies to the relevant material; Night mode improves the clarity of sound for low-level listening; and Portable Audio Enhancer aims to boost the quality of compressed audio playback. 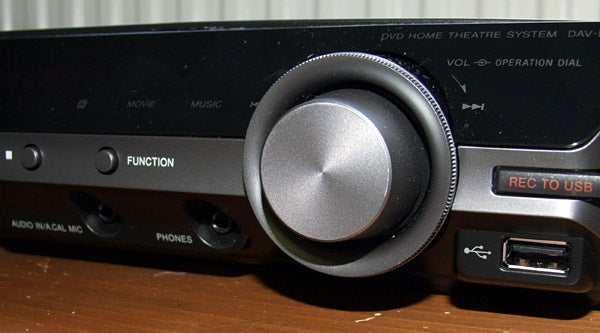 If you’ve got a large library of digital music, then this is the system for you. Transfer your tracks onto a USB stick, CD or DVD, load them up and away you go – the DAV-DZ280 supports MP3, WMA and AAC, and the sound quality is fantastic, particularly with Portable Audio Enhancer doing its thing. Sadly though, it’s not as talented with video files, as it doesn’t even play regular DivX, let alone DivX HD or MKV, and JPEG photos can only be played back from CD or DVD.


Setup is a quick and stress-free experience. The colour-coded plugs on the supplied cables make it clear which holes they need to be shoved in, while the Digital Cinema Auto Calibration mode optimises the speakers automatically using the supplied setup microphone, which is placed in the listening position and takes readings from a series of test tones. 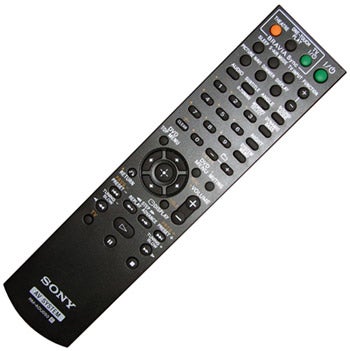 And once you’ve installed and calibrated the system, further tweaks can be made in the comprehensive ‘Custom’ setup menu, but there’s also a ‘Quick’ version if you only need to alter the basics. The onscreen layout is clear enough, using attractive graphics and legible text, while the submenus are logically sequenced. To top it off, the cursor moves from option to option with reasonable swiftness.


But it’s not all good news on the ease-of-use front. The remote lets the side down with an unreasonably cluttered layout, too many small, fiddly buttons and counter-intuitive labelling. It takes ages to find the buttons you’re looking for, particularly when it comes to accessing the setup menu, as there are two buttons labelled ‘Display’ and one labelled ‘System Menu’ – the latter activates the menu on the front display panel, while the onscreen setup menu is accessed by hitting one of the Display buttons or ‘Tools’. All in all, it’s a complete mess.

But back to the good news, and the system’s sound quality is superb for the money. There’s a smoothness and maturity with movies that you don’t get from the vast majority of one-box systems at this price, making for an enthralling and hugely satisfying listen.


Its qualities are perfectly demonstrated by ”Star Wars Episode I: The Phantom Menace” on DVD. We skipped straight to the Podrace sequence and the Sony delivers the roaring engines with plenty of power and bass rumble, the bangs and crashes are fast and engaging, and the expansive crowd noises emanating from the surround channels put you right in the middle of the race. What’s most impressive is that high-frequencies are crisp without sounding abrasive or hard, even at loud volumes – a rare talent for a sub-£200 one-box job.

What’s more, John Williams’ iconic score sounds suitably majestic, and although the movie’s dialogue is clunky, at least you can hear it clearly over the hubbub of the busy action scenes. Before we get too carried away, it’s worth pointing out that it’s no match for a good quality separates system, lacking the foundation shaking power or high-frequency finesse of our reference home cinema system, but it’s much better than we expected.


And its talents don’t stop there. The DAV-DZ280 does a terrific job of handling the extra sonic detail and surround sound information on the SACD version of ”Avalon” by Roxy Music, submerging you within a smooth and absorbing soundstage. The chunky drums of ”More Than This” are delivered with plenty of punch, while the title track’s lilting rhythms and sax licks are warm and seductive. We’ve heard this disc conveyed with more openness and control by pricier separates systems, but getting any kind of SACD playback at this price is a real bonus.


It’s a shame then that the system’s pictures don’t measure up to this impressive sound quality. With ”The Phantom Menace” played through the HDMI port at 1080p, the picture has a strangely over-egged colour balance, which makes skin tones look unconvincing and bright colours stray into garish territory. There’s also more noise in the picture than expected, which crawls around on large patches of colour and makes edges look a tad fuzzy. There’s also evidence of over-sharpening and mosquito noise around edges.


There’s no denying that the DAV-DZ280 offers good value for money. Its sound quality is much better than most one-box systems at this sort of price, plus the inclusion of SACD playback, an iPod dock and a USB port with AAC support and CD ripping will appeal to a great many people. But on the downside, there are a few potential deal-breakers – picture quality is poor, there’s no DivX playback and rear connectivity is limited, so if these things are important to you then it might be best to investigate rival systems from LG and Samsung before reaching for your credit card.