It’s been a while since I’ve reviewed any of Sony’s compact cameras, so I’ve got a bit of catching up to do. In fact make that a lot of catching up. Sony’s range of Cyber-shot compact and super-zoom cameras now consists of no less than eighteen models, with four new additions announced just this week, ranging from 6-megapixel ultra-slim entry-level models all the way up to the impressive semi-pro R1, with its 10-megapixel sensor and 24-120mm lens. 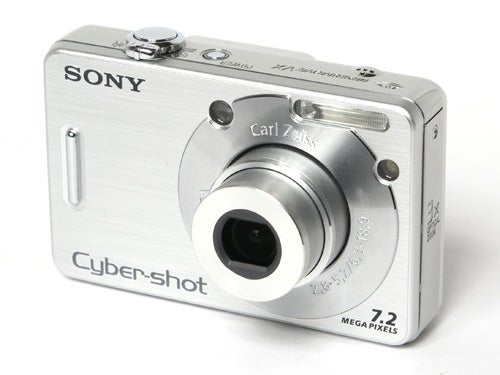 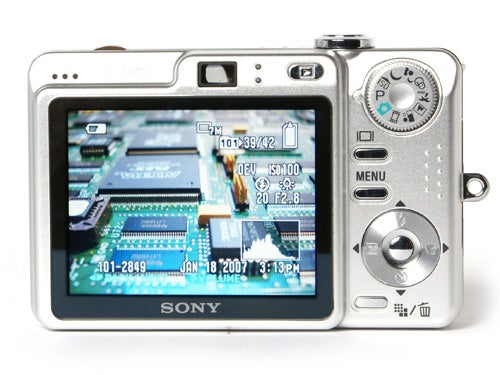 As befits its mid-range status, the W70 is a fairly unremarkable looking camera. It has a functional but not unattractive aluminium body with nice brushed finish and chrome trim, and the usual selection of external controls. Measuring 88.9 x 57.1 x 22.9mm it is slim and compact, and weighing in at 127g empty or 157g ready to shoot it is nice and light, but in neither case exceptionally so. Build quality is excellent, and although the aluminium body doesn’t feel as solid as the steel shell of a Canon IXUS or Casio Exilim, it is still sturdy enough to be carried around in a coat pocket.


Handling is good, with plenty of room on the back of the camera and a small raised feature on the front to give a nice secure grip. The zoom control around the shutter button is quick and responsive.

The main features include a flush-retracting f/2.8 – f/5.2, 3x zoom lens bearing the imposing Carl Zeiss Vario Tessar name, a 2.5in LCD monitor with a fairly low-res 115,000 pixels, and an optical viewfinder, although to be honest this is so small and dark that it’s pretty much useless.


The shooting modes are selected via a rotary dial on the upper right of the back panel, and include full Auto, Program, High-ISO Program and six scene modes; Twilight, Twilight Portrait, Snow, Beach, Landscape and Soft Snap, which is a flattering portrait mode. 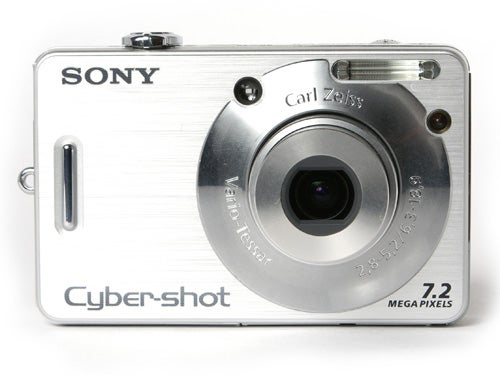 The W70 has a decent movie mode capable of shooting 640 x 480 resolution at 30 frames a second, but then so have most compact cameras these days. Even the documentation is good, with a simplified “Read This First” leaflet a well as an excellent 106-page full manual, which is always good to see.


In overall performance the W70 does well, starting up in just under two seconds which is reasonably fast. The AF system gets a lock in well under a second in good light, which is also about average for a good system. However its low-light focusing, while a bit slower, is exceptionally good. It has an AF illuminator of almost laser-like intensity with an effective range of around five metres. The built-in flash is also very good, with a maximum range of 3.7m at wide angle and auto ISO, or a big 6.5m at 1000ISO. 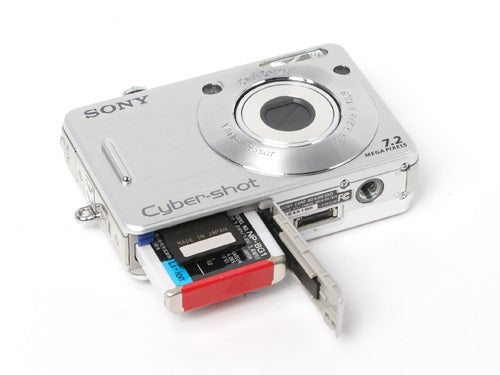 The continuous shooting mode is also a bit above average. In normal burst mode and fine picture quality it can fire off a burst of four shots at a rate of one shot per second. Reducing the picture quality to standard doesn’t increase shooting speed, but does increase the count to six frames.

If the W70 has one stand-out feature, it’s battery life. It is powered by a Sony NP-BG1 Lithium-ion battery which is rated, in typical Sony we’ll-do-it-our-own-way style, at 3.4Wh. Everyone else in the entire world rates rechargeable batteries in milliamp-hours, or mAh, but not Sony. Sony has to be different, so it rates its batteries in Watt-hours. 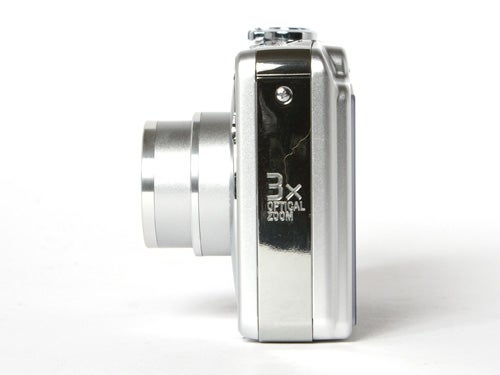 From what little I remember of A-level physics, Amps = Watts/Volts, so the W70’s 3.6V battery is roughly 940mAh which is tiny by modern standards, but nonetheless it is able to power the camera for a claimed 360 shots or 180mins of playback. I took well over 300 shots on a single charge with a new battery, so this claim seems to hold water.


So far the W70 is about average in most respects, with a couple of good points, so naturally there are a couple of bad points to balance them out. Unfortunately the bad points are in the crucial area of image quality, which is odd because this is usually a strong point for Sony. 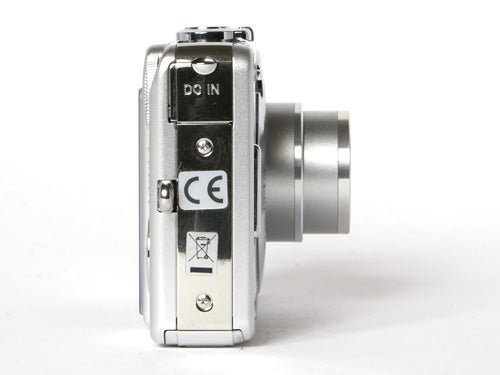 The main culprit is, surprisingly, the lens. Despite the assurance of the prestigious Carl Zeiss name, it suffers from very bad distortion, some barrel distortion at the wide end as is usually the case, but also severe pincushion distortion at the telephoto end, something I don’t think I’ve seen before on a digital compact. This effect is the opposite of barrel distortion, as you’ll see in the sample photos. At the telephoto end it also suffers from very bad corner blurring, but only at focusing distances of less than a metre.


As well as this the W70 also suffers from image noise. At 100 ISO the pictures are clean and sharp, but at 200 ISO and over there is visible image noise, getting steadily worse up to the maximum 1000 ISO. It’s not the worst I’ve seen, but it is annoying, because other than these flaws the image quality is very good. Exposure, dynamic range and colour reproduction are all first class, focusing is accurate and apart from the close-range telephoto shots edge-to-edge sharpness is excellent. It’s just a shame it’s not consistent. 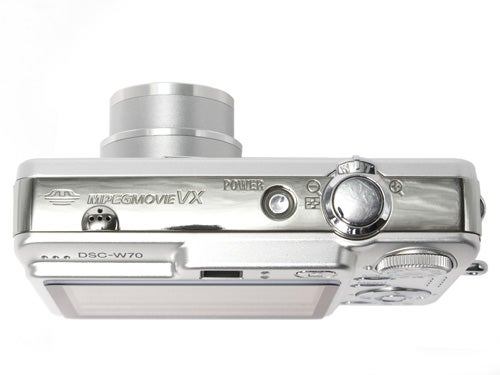 
The Sony DSC-W70 is pretty much the definition of an average snapshot compact. It is well made, looks good, is reasonably light and compact, performs competently and can take decent pictures. It has a couple of strong points, namely its excellent low-light performance and exceptional battery life, but it also has a couple of flaws, specifically image noise above 200 ISO, and that unusual telephoto lens distortion. Good value for money, but doesn’t stand out in a crowded and competitive field. 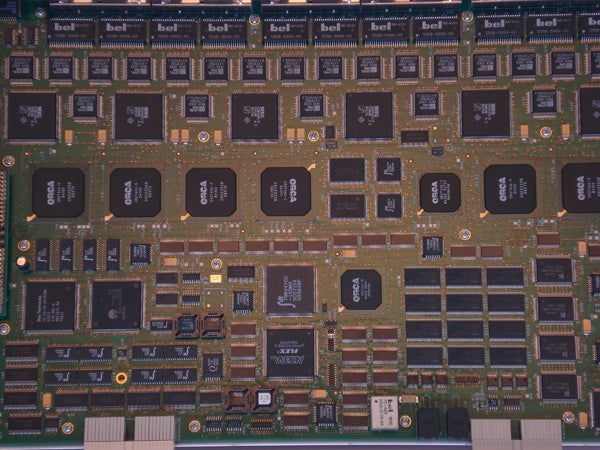 In this ISO test shot, taken at a range of about one metre using the maximum telephoto zoom setting, you can clearly see the pincushion distortion. The lines of chips on this circuit board should be straight and parallel, but instead the lines around the edges of the frame bend inwards towards the middle. This is caused by poor lens design, not something normally associated with the Carl Zeiss name. 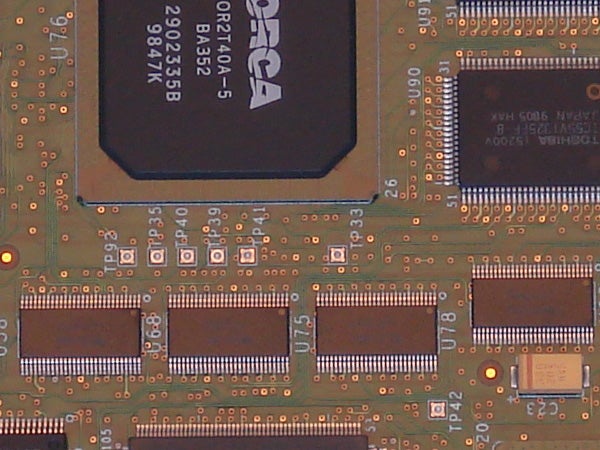 At the minimum setting of 100 ISO the image is nice and sharp, with no trace of image noise. 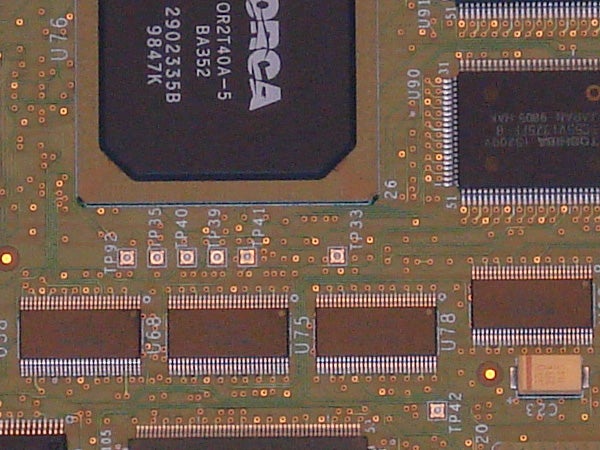 Already at just 200 ISO there are patches of random red and green colour noise on the darker areas of the image. 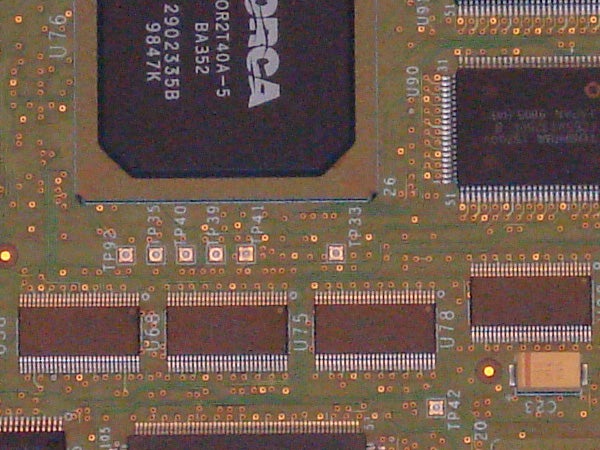 400 ISO and the noise is worse, spreading into the mid-tone areas. 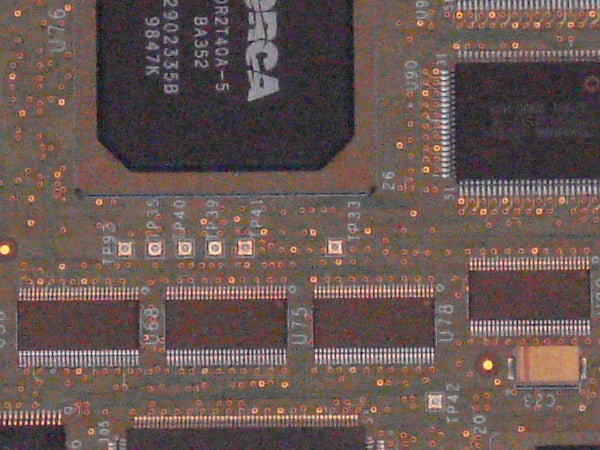 At 800 ISO the image noise is now very bad, and would certainly show up on even a small print. 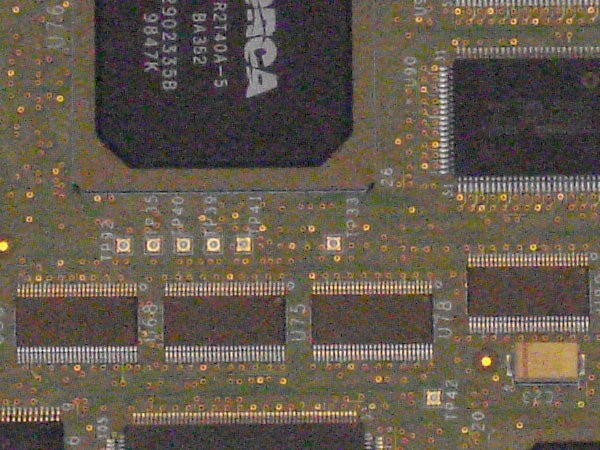 A small increase in speed to the maximum 1000 ISO sees a corresponding increase in noise, and colour reproduction is also compromised. 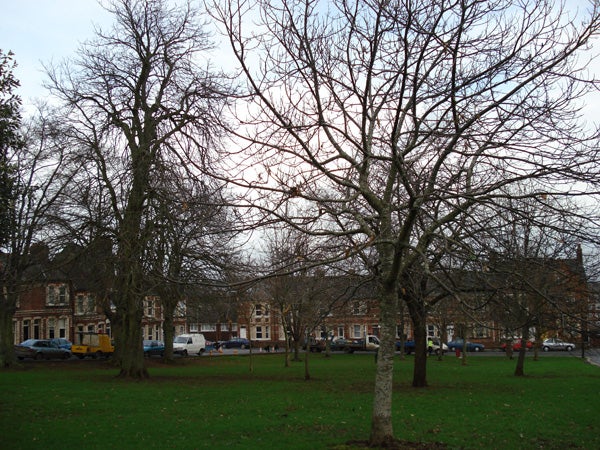 Shooting thin dark branches against a bright sky is usually a problem, but the W70 has got the exposure just right, with enough dynamic range for both highlight and shadow detail. 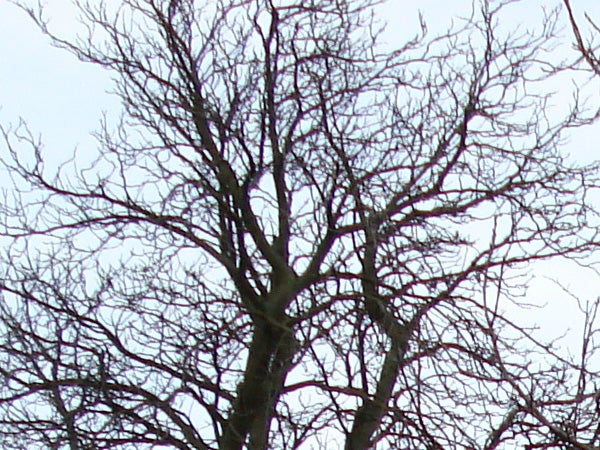 This 100 percent crop from the top left of the previous image show no purple fringing and good edge sharpness. 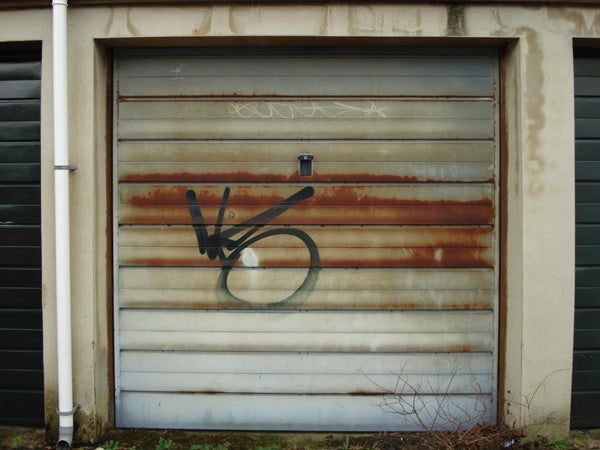 At the wide angle end of the zoom range the W70’s lens suffers from barrel distortion, but no more than most 3x zoom compacts. 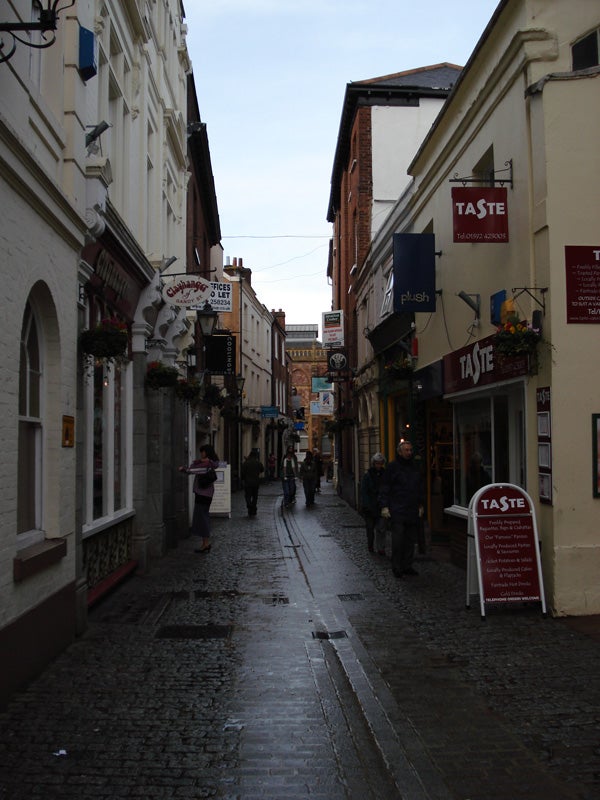 The wide-angle end of the zoom range is equivalent to 38mm, not very wide but about average for a pocket compact. 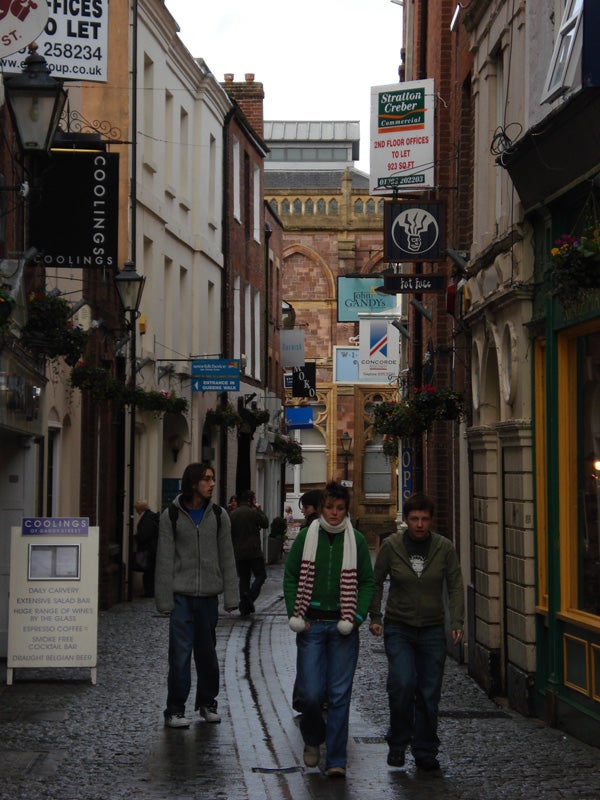 You can’t spot it as easily as in the main ISO test shot, but if you look at the vertical line of the shopfront on the right you can see the bowing effect caused by pincushion distortion in this telephoto shot. 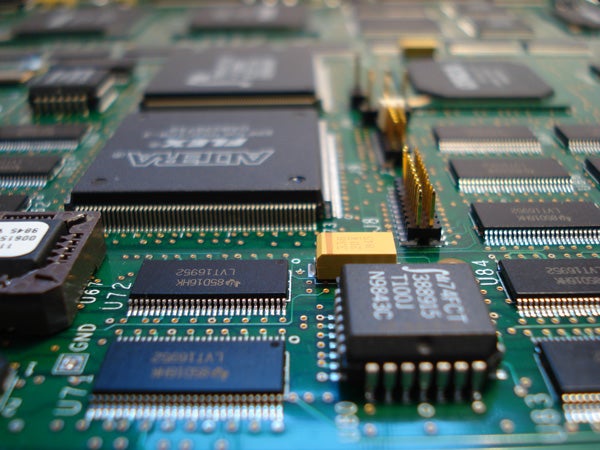 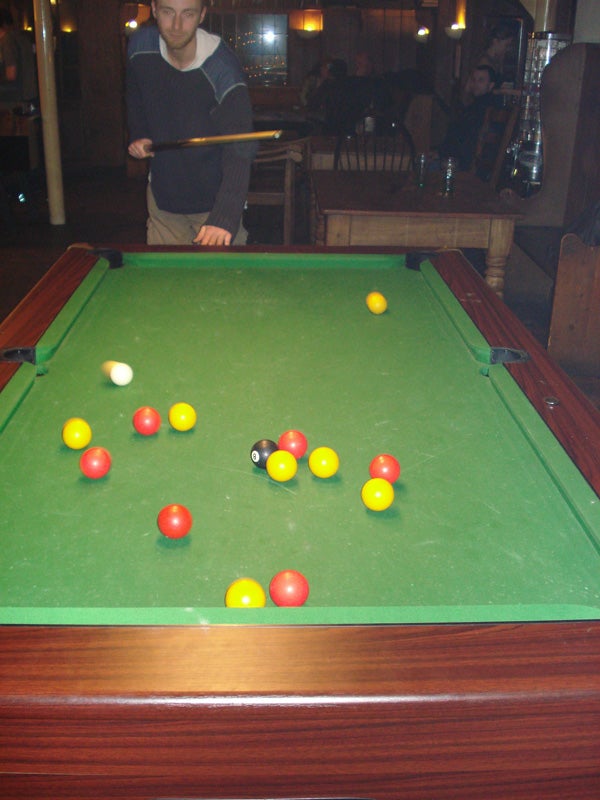 The W70’s built-in flash is nice and powerful with good frame coverage, and its low-light focusing is exceptionally good. And yes, the white went down the side pocket. Two shots to me! 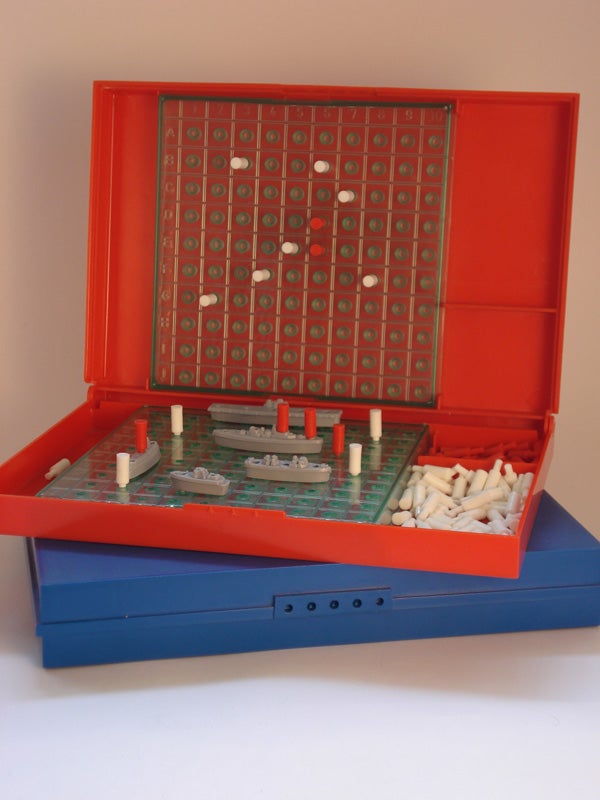 This was taken indoors under a tricky combination of incandescent lighting and natural daylight, using auto white balance. The W70 has coped well and got the colours pretty much perfect. I keep this game around in case the Grim Reaper comes to visit.