Like mobile phones, music players, PDAs and other modern high-tech gadgets, compact digital cameras tend to get slimmer and lighter with every passing year. Today I’m taking a look at the slimmest camera I’ve seen so far, the new Cyber-shot DSC-T77. At just 15mm thick and with a shooting weight of 151g it sets a new benchmark for ultra-compact cameras. 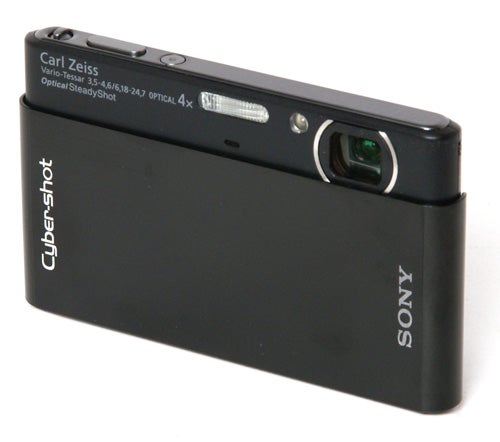 Launched in August this year, the T77 is a 10.1 megapixel, 4x zoom ultra-compact that features optical image stabilisation and a 3.0-inch touch-screen monitor. Like all of the models in Sony’s style-conscious T-series it has a sliding front panel that serves as both a lens cover and the main power switch. It shares a lot of its features and functions with the earlier Cyber-shot T70 an 8.1-megapixel, 3x zoom model, launched late last year and currently selling for around £150.


Any high-spec luxury ultra-compact will inevitably be compared with something from Canon’s IXUS range. Perhaps the closest match would be the 10MP, 5x zoom IXUS 970 IS (£210), but that camera is much larger and heavier. A better fit is the new Nikon CoolPix S60. The S60 has a 10MP sensor, a touch-screen interface and optical image stabilisation, but has a 5x zoom lens. It also sells for around £250, which actually makes the Sony look reasonably priced at £210 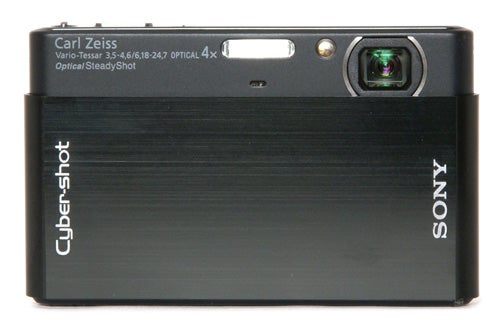 There’s no denying that the T77 is a very cool looking gadget. Everyone to whom I showed it was impressed by its slim body, elegant styling and solid build quality. It is available in a wide range of colours including silver, black (shown here), pink, brown or bright green. Despite its low weight the camera’s body is made of steel and is exceptionally well built. The sliding front cover is solidly mounted and feels very secure, and when closed it provides good protection for the lens and flash.

The large touch-screen interface replaces most of the camera’s external controls, leaving only the shutter button, the playback mode button, a slightly redundant power button and the tiny and rather fiddly zoom control, which is a miniature rocker switch on the top panel. Despite its small size the zoom control is exceptionally smooth. It doesn’t appear to be a stepped zoom, so it is possible to frame shots accurately, but the tiny control does make this a bit tricky. 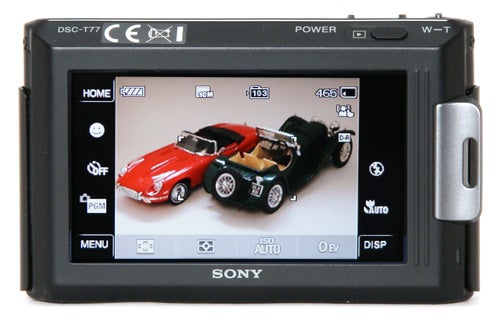 The touch-screen interface works well, but as usual the touch areas are quite small, and anyone with large fingers is going to find it a bit fiddly. However with practice and a long sharpened fingernail it is possible to operate the T77 quickly and smoothly, although the focus point selection proved to be unresponsive and awkward to use. If I have one complaint it is that in program mode the screen is very cluttered, with buttons obscuring the bottom edge of the frame. It is possible to turn the icons off, but this does rather defeat the point of a touch-screen interface.


The T77 is a fairly simple camera. It has three main shooting modes; a program mode in which all menu functions are available and functions such as metering, focusing, ISO and EV compensation available via on-screen buttons. In Auto mode these disappear and the camera handles scene mode selection, macro focusing, exposure metering and pretty much everything else automatically. As well as this there is an even simpler Easy mode, in which everything except number of shots remaining and focus confirmation are hidden from the user.


The camera also has a number of scene programs, six fairly standard ones in the Scene mode, plus landscape, night portrait, soft snap and twilight modes. There are several other shooting mode features, including face detection, a smile detection mode with adjustable sensitivity, and Sony’s Dynamic Range Optimiser, which helps to preserve shadow and highlight detail. 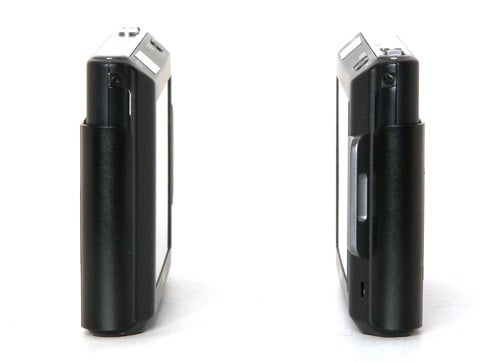 What it lacks in shooting features, the T77 makes up for with its huge list of playback features. It has multiple image editing options, including useful tools like automatic red-eye removal, as well as a fun effects using the touch screen, such as radial blur, starburst effects, vignetting effects around a selected point, and even a face-detecting warp feature that can make any glum-looking people in your shots appear to be smiling. There are also several slideshow features such as automatic subject detection, colours and transition effects and a selection of fairly cheesy music tracks.

Overall performance is normally a strong point for Sony cameras, and the T77 is a prime example. It starts up in just under 2.5 seconds, which is about average for a compact camera, although the shot-to-shot cycle time in the highest quality mode is an impressive 1.6 seconds. In continuous shooting mode it is even quicker, maintaining a brisk 0.6 seconds per shot with no apparent buffer limit. The autofocus system is exceptionally fast good light, and barely slows down in low light. Even in total darkness the camera performs extremely well, with the bright AF assist lamp enabling it to focus reliably at a range of several meters.

Flash range is a bit limited, and the camera tries to make up for this by boosting the sensitivity setting up as high as 800 ISO to maximise the range. Unfortunately this results in major image noise problems. Frame coverage is good though, and the flash metering is accurate so it doesn’t burn out details at close range.


Overall image quality is about average for a 10MP compact, and about the same as the T70. Exposure metering is accurate, focusing from the multi-point AF system is usually spot on, and colour rendition is also generally very good. Sony’s Dynamic Range Optimizer is one of the best shadow and highlight compensation systems that I’ve seen, and does a good job of capturing shadow detail without sacrificing too many highlights. The image stabilisation system is also very good, giving the usual three stops of extra stability.


The 4x zoom periscope-type, Carl Zeiss-branded lens is not bad for something so compact and with such a convoluted light path. Centre sharpness is excellent, although it does suffer from corner blurring and some chromatic aberration toward the edges of the frame. It also produces some barrel distortion at wide angle, but I’ve seen a lot worse. 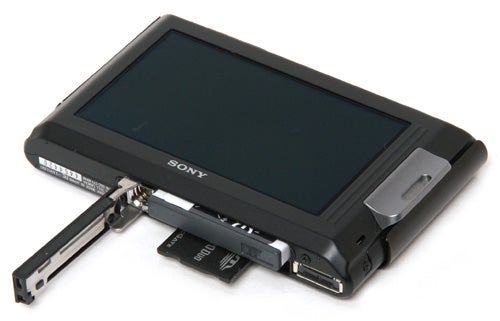 What lets the T77 down is image noise and, once again, harsh JPEG compression. The T77 produces image files averaging around 3.3MB, which is very small for a 10MP camera. The result is blotchy colour even at the lowest ISO setting, and a scattering of JPEG artefacts that obscure fine detail and spoil areas of smooth tone. However this probably won’t be a major problem for the T77’s target audience. If all you want is some pictures for Facebook or snapshot-sized prints you’ll probably never notice the camera’s shortcomings.

The Sony Cyber-shot T77 is quite expensive, but compared to other luxury compacts it’s really not too bad. Its big selling point is its ultra-slim size and pocket-friendly weight, but it is a well designed and solidly made camera that will look good anywhere. The touch screen interface works well if you have the right sized fingers, and the overall performance is exceptionally good, especially in low light. Image quality could be a lot better, but if you want a cool and stylish camera for social snapshot photography it should certainly be on your shortlist. 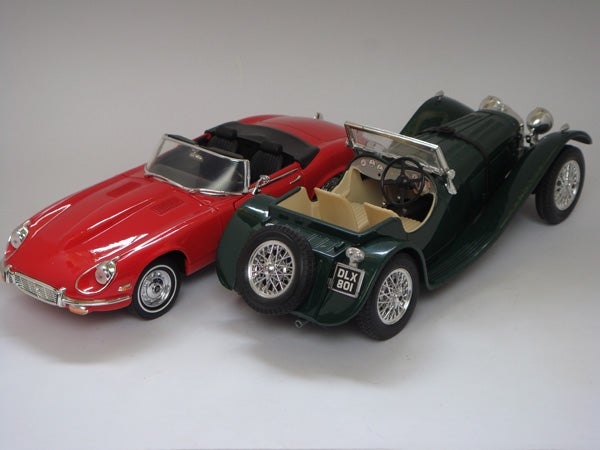 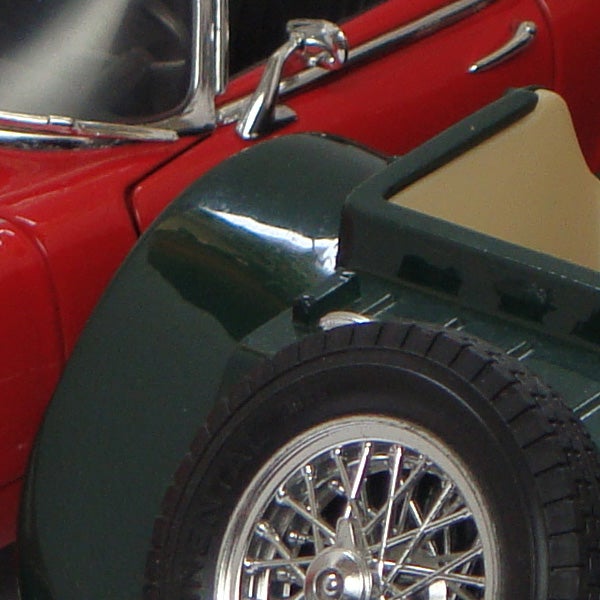 Even at 80 ISO there is some slight colour mottling, as well as JPEG artefacts. 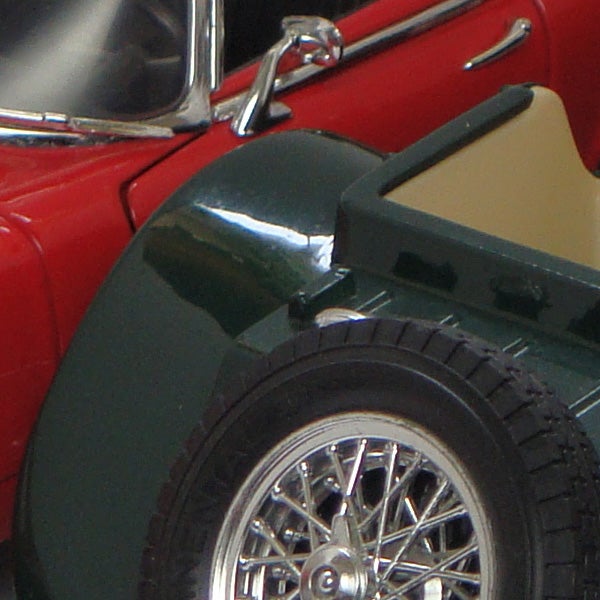 NOt much difference at 100 ISO 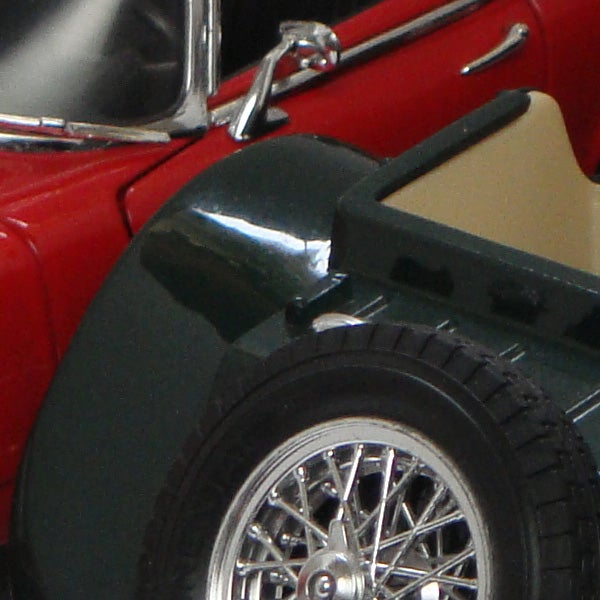 At 200 ISO the colour is starting to fade in the green channel, and noise is getting worse. 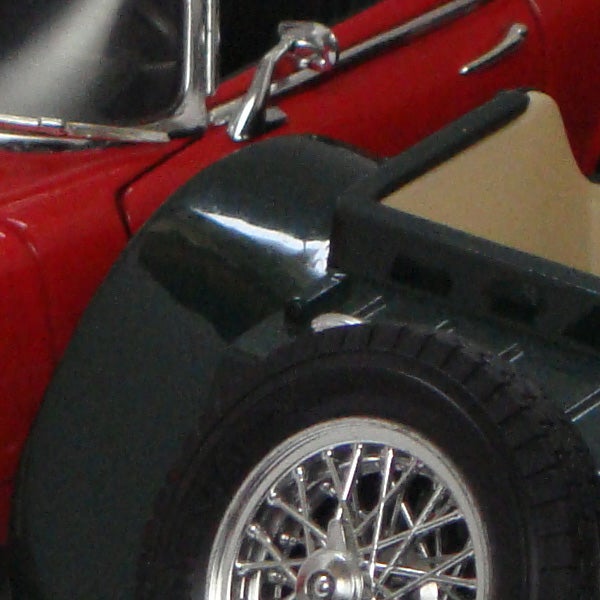 Progressively worse noise at 400 ISO, but surprisingly there is still a lot of fine detail, such as the lettering on the spare tyre. 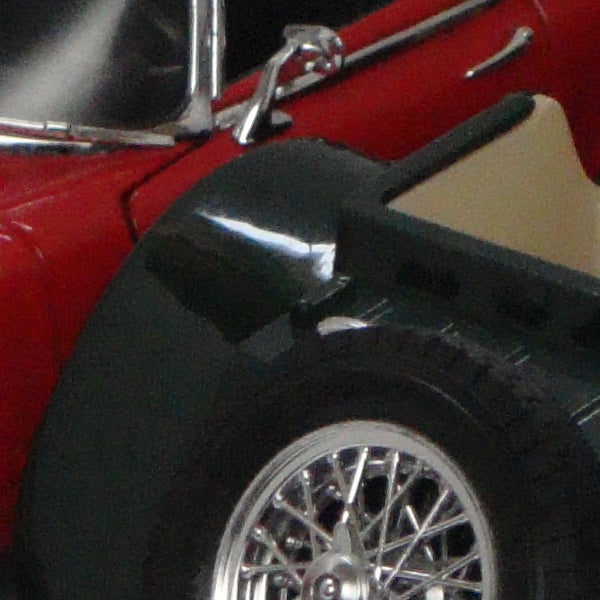 The noise control system goes into overdrive at 800 ISO, and the green colour is almost completely desaturated. 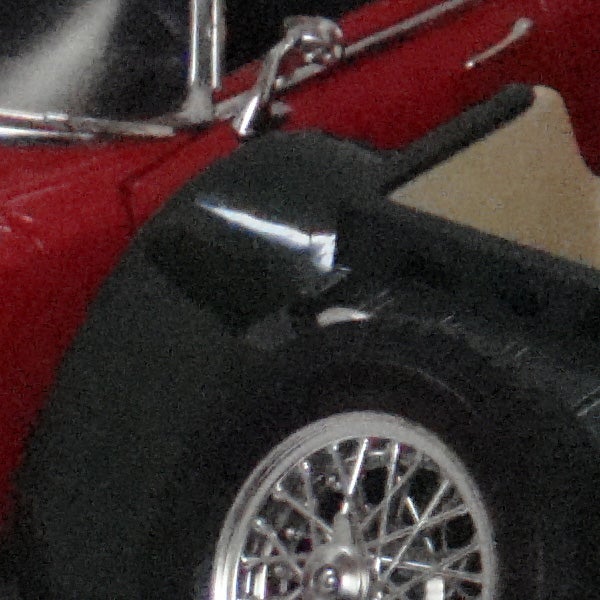 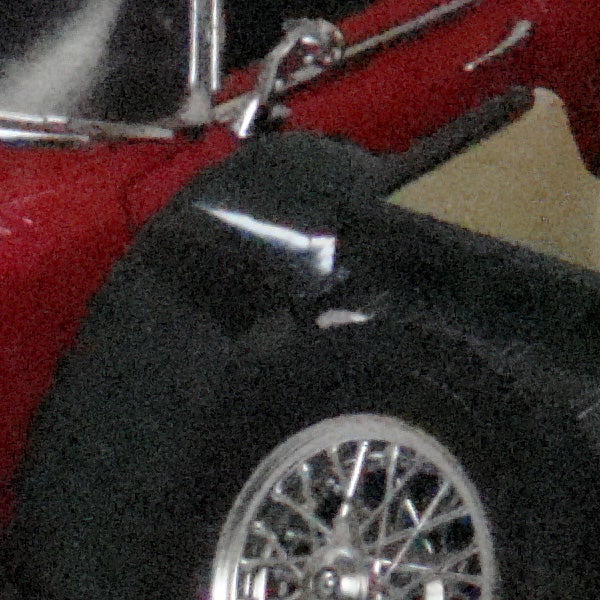 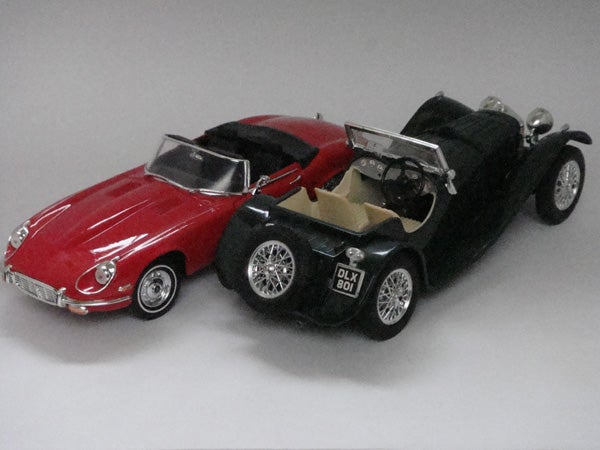 This is the full frame at the maximumsensitivity setting of 3200 ISO. 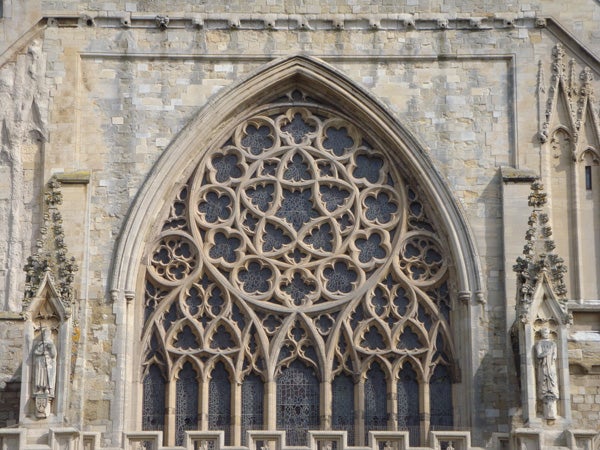 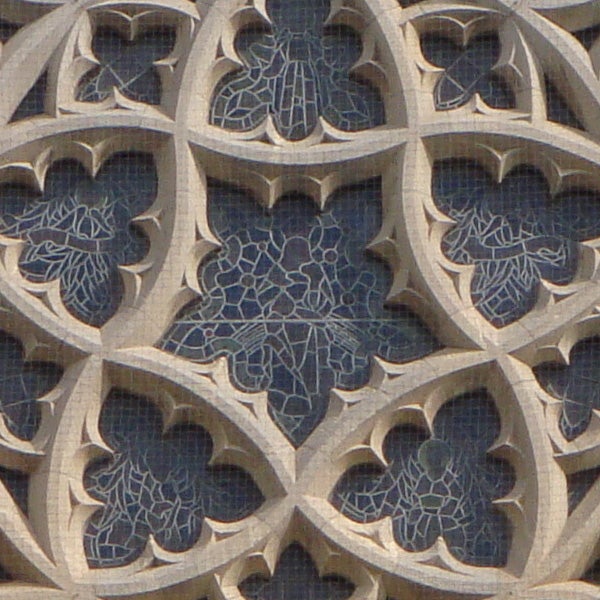 The lens peforms well and the camera captures a lot of fine detail, but a lot of it is lost to JPEG compression. 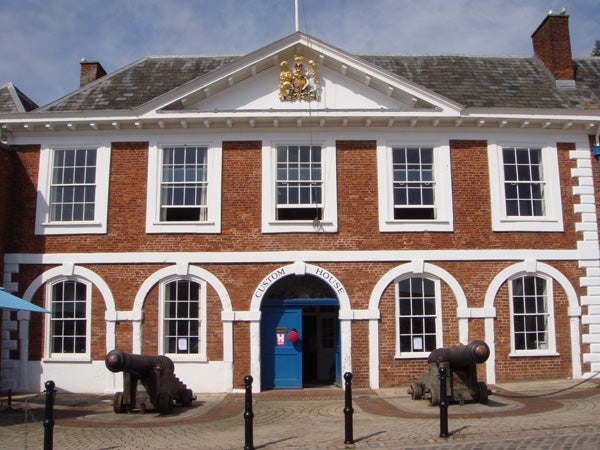 The lens produces surprisinly little barrel distortion, considering how small it is. 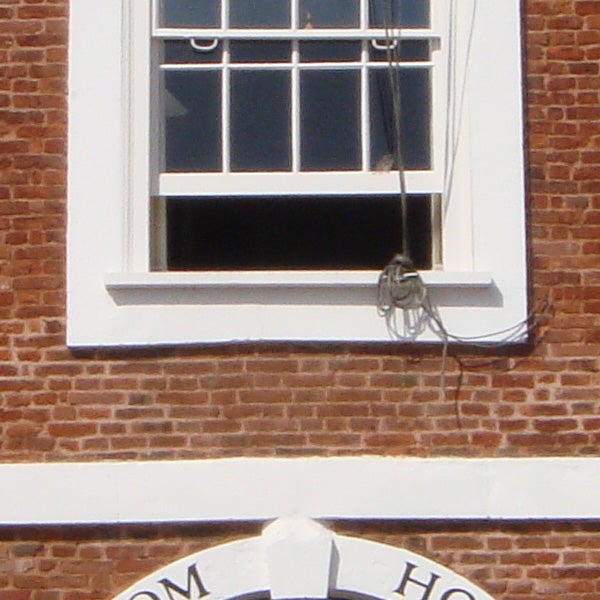 Centre sharpness is good, but again the heavy-habded compression has produced JPEG artefacts. 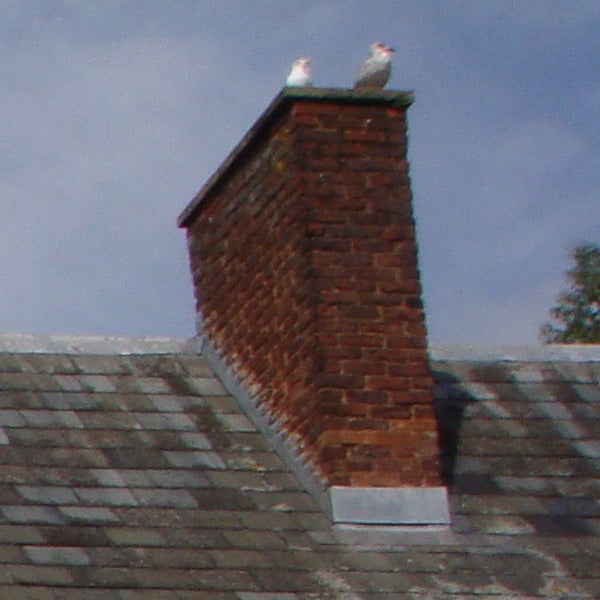 There is slight blurring and chromatic aberration in the corners, but not enough to cause a big problem. The wide-angle end is equivalent to 35mm, not to wide but about average for an ultra-compact. 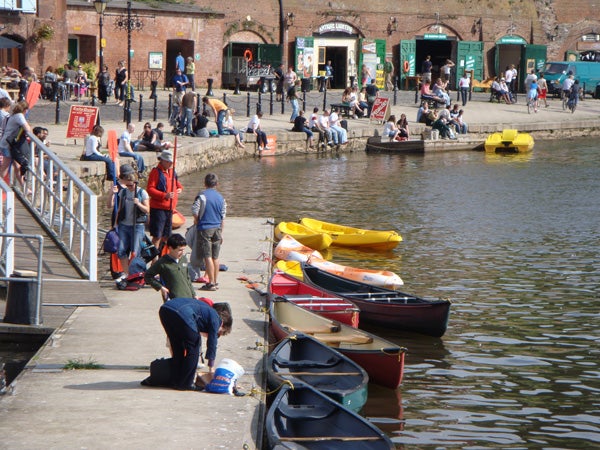 The telephoto end is equivalent to 140mm, useful for picking out details in a scene. 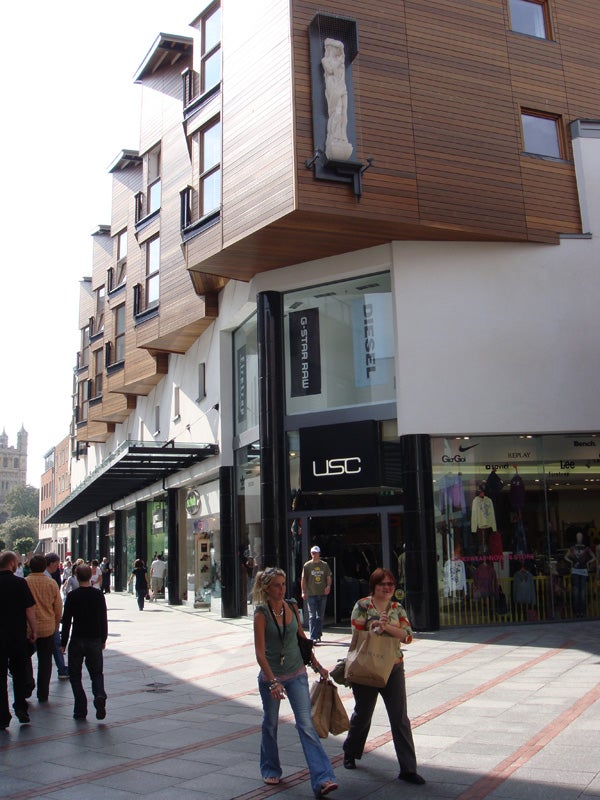 The Dynamic Rnage Optimiser does a good job of preserving shadow detail, although some highlights are burned out. 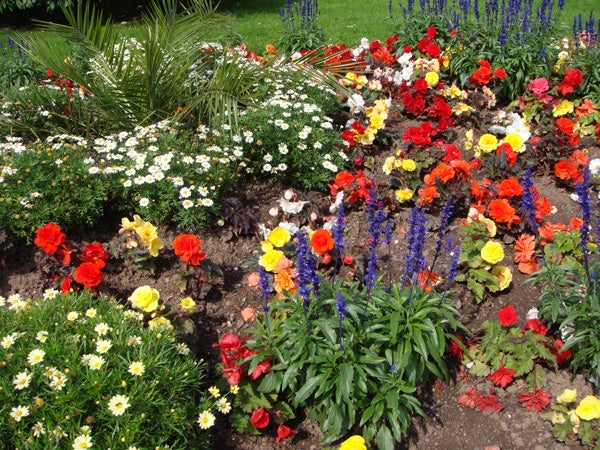 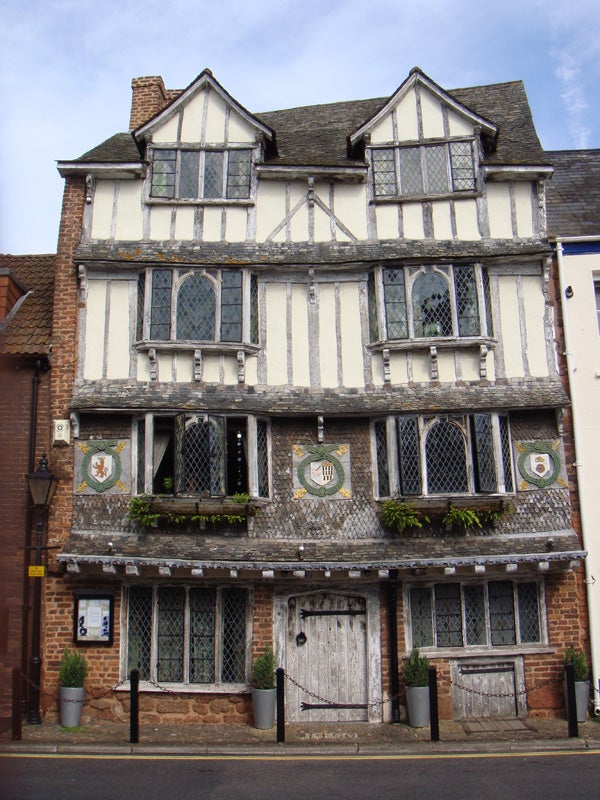 This awesome house, known locally but inaccurately as the Tudor House, was built in 1660, and painstakingly restored by one man, Bill Lovell, over a period of 10 years in the 1960s and 1970s.