It’s a bit of an over simplification, but broadly speaking digital still cameras and digital video cameras use the same basic technology. They both usually have a CCD image sensor, a compact but powerful zoom lens, electronic systems for autofocus, exposure metering and image processing, and both record the results onto a digital storage medium. In the case of video cameras this is usually digital video tape, while still cameras generally use removable flash memory cards. 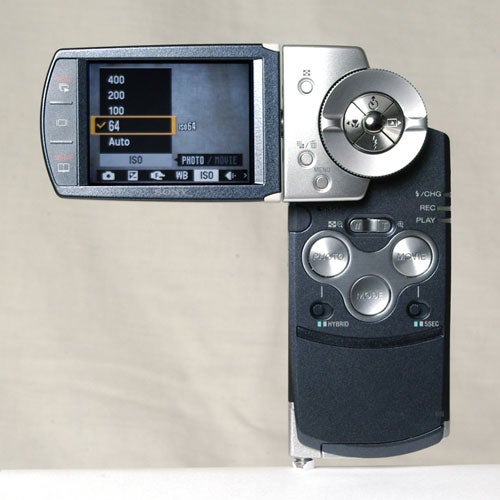 Memory cards have been getting simultaneously more capacious and cheaper almost by the day, and for some time now it has been entirely possible to record quite long video segments directly onto memory cards. Indeed many digital still cameras can record video in high quality 640 x 480 resolution at a smooth 30 frames a second, so it’s hardly surprising that there have been several attempts to create a true hybrid, a camera that is equally well adapted for shooting both stills and video. However for some reason this seems to be proving inordinately difficult.


One of the most recent attempts is this, the Sony Cyber-shot DSC-M2. It features an unusual two-part swiveling design that resembles a mobile phone, and based on the specification alone it sounds promising. It has a 5.1 megapixel sensor, a 3x optical zoom Carl Zeiss lens and a 2.5in flip-and-twist LCD monitor, which should make it a pretty good stills camera, but it also shoots 640 x 480 resolution video at 30 fps with stereo audio, and records in the high-quality MPEG 4 format, so it should be nearly as good as a camcorder. It’s certainly got a camcorder-like price tag, costing a hefty £399.98 on the high street, and over £312 online. However despite this it still manages to get it all horribly wrong. 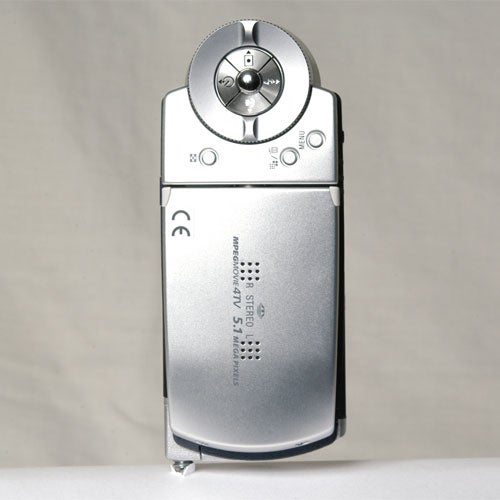 The big problem is the shape of the thing. Still cameras and video cameras have both evolved their current forms over many generations of ever-improving designs. They are the shape that they are because that is by and large the best shape that fits their function. A still camera is needs to be easy to hold steady, while a camcorder should be easy to move about smoothly. Unfortunately the design of the M2 achieves neither of these aims. It is shaped very much like the latest generation of mobile phones, which while ideal for making and receiving calls, is not best suited for taking photos. Sony’s own website describes the M2 as having “Ergonomic design with one-handed grip”. I can only assume from this that the person who designed it either has very oddly shaped hands, or has never previously encountered the word “ergonomic”.

While it’s certainly possible to hold the camera in one hand, it has such an awkward shape, and the controls are so inconveniently placed, that it is virtually impossible to hold it steady or to move it smoothly. No matter how you position your fingers the shape of the case refuses to sit in a comfortable position. There’s just nothing to get a grip on, and as a result the camera jiggles about whenever you try to press the shutter release or operate the zoom control, producing blurred pictures and shaky video. In the end you have to hold it two-handed, the right hand holding the main camera body while the left hand steadies it by holding the swing-out section carrying the LCD. If you’re left-handed then you’re going to have to learn yoga or something, because there is nothing on the right to hold onto. 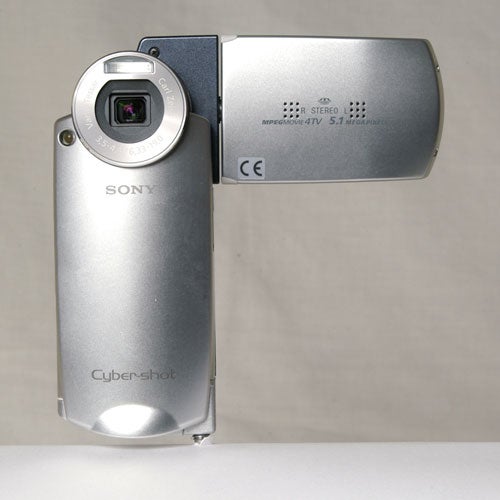 There are other problems associated with the design as well. There is a jog dial located around the D-pad, which is used for in shooting mode to adjust exposure compensation and in playback mode for scrolling through your pictures. However it is far too sensitive, so it is very easy to accidentally brighten or darken your pictures, and extremely difficult and frustrating to scroll through your recorded images one at a time.


The rotating body also doubles as a power switch, but it is spring loaded so that it flips out with just a slight push. Unfortunately since there is no way of latching it shut it also has a tendency to flip open and switch itself on while in your pocket. 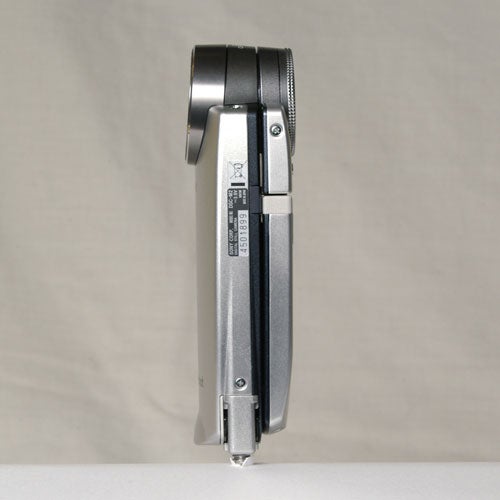 The control interface is also not-standard, and I personally found it to be extremely counter-intuitive, although to be fair this may be because I am so used to handling more conventionally designed cameras. The ‘mode’ button, rather than accessing different shooting modes as one might expect, instead activates the playback mode. Other controls are also just as puzzling. Spot metering gets its own dedicated button, as does recorded image size, but other options such as ISO, white balance and focus mode require a visit to the menu system. The menu itself is also rather confusing, with some options greyed out until other options have been activated. For example activating the multi-burst mode allows access to a separate menu choice for the frame rate. Wouldn’t it have been easier and less confusing to make the frame rate a sub-menu of the multi-burst mode option?

Another questionable design decision is the relatively puny battery, providing just 210 shots on a full charge. It is the first camera that I have used in over a year that actually ran out of power within a normal day’s testing. At least Sony’s InfoLithium battery does tell you exactly how many minutes of shooting you have left, but I’d rather have a battery that can last a bit longer. 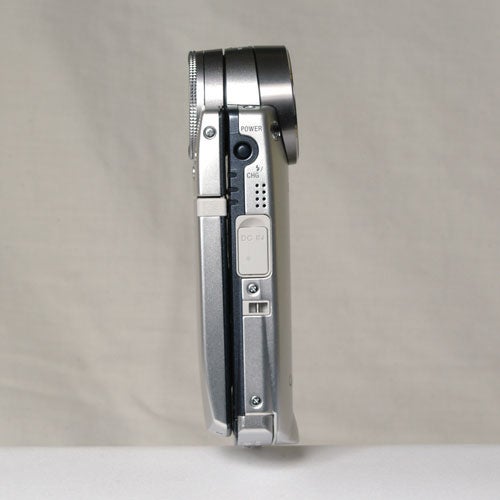 The great pity is that concealed beneath this needlessly quirky design is actually a pretty nice camera. Its performance is excellent, with a 1.5sec start-up time, fast and accurate focusing and exposure, and very good low light performance. The excellent lens, 5.1 megapixel sensor and Sony’s acclaimed Real Imaging processor provide superb picture quality, and image noise control is excellent at all but the highest ISO setting. The movie mode is also satisfactory, producing good artefact-free shots with good colour reproduction and a nice smooth frame rate, although the sound quality isn’t as good as I’d hoped. The M2 has two microphones for stereo sound, but they are both located on the back of the LCD screen, less than an inch apart and both to the left of the lens, so there is no noticeable stereo effect. 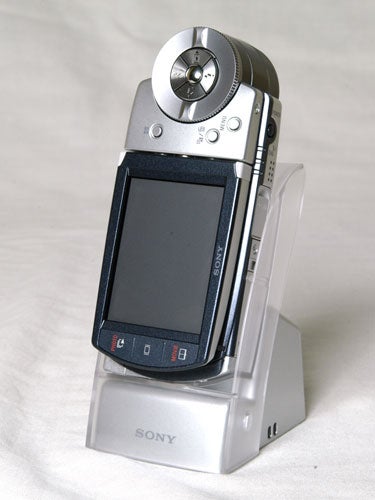 If all the components of the M2 could be put into a better designed body with a more accessible control system, it really could be one of the best hybrid cameras on the market, but as it stands it is a frustrating and over-priced gimmick that ultimately fails at its stated purpose.


For half the price you can get a camera that takes pictures and shoots video just as well, but is far easier to handle. The M2 may look cool and funky, and there’s no denying that it can take good pictures, but its shockingly poor handling, badly designed and over-complicated controls and limited battery life, combined with an inflated price tag, make this a big white elephant. 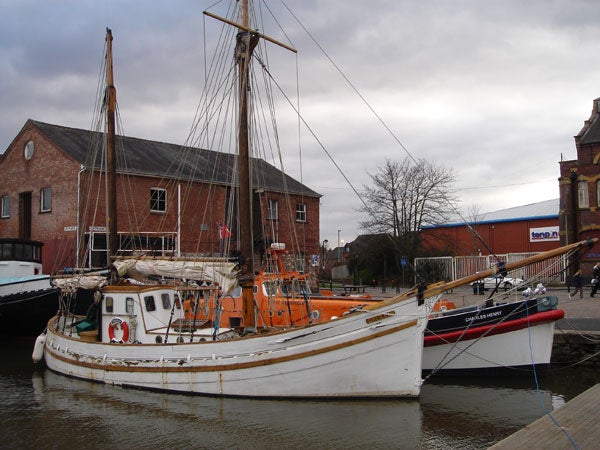 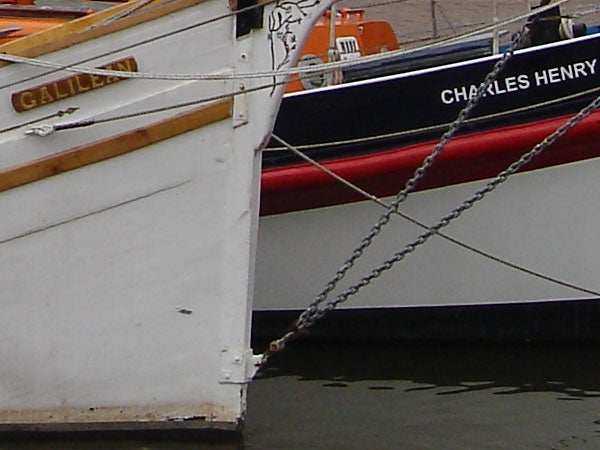 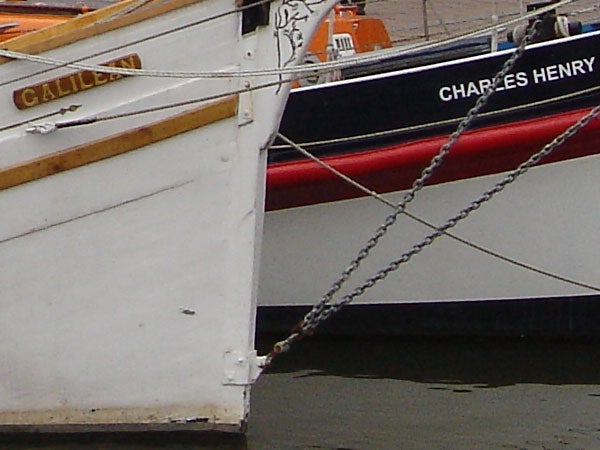 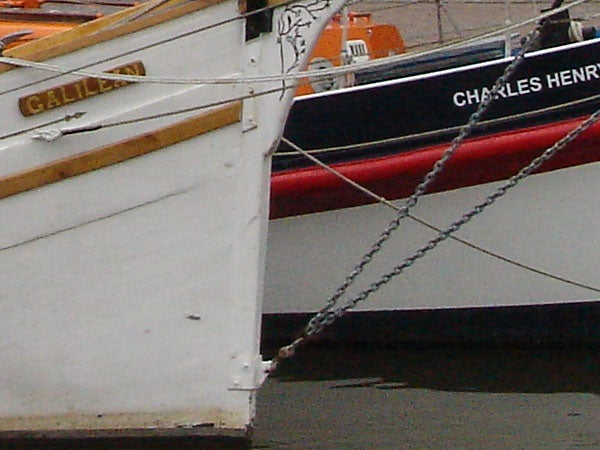 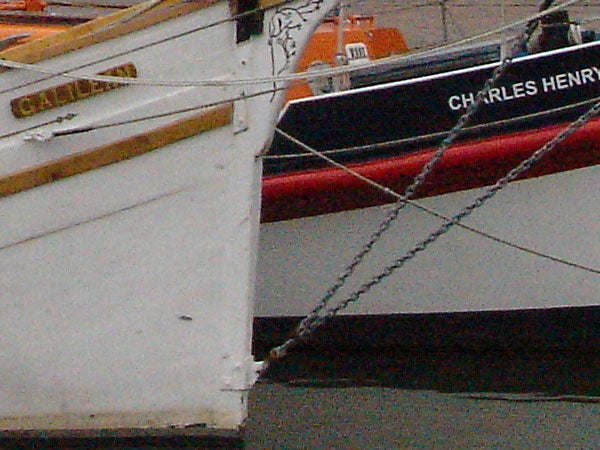 1/400th sec, F5.6, ISO 400. At the maximum sensitivity setting the image is quite noisy, but the overall exposure and colour rendition are still good enough to produce a usable image. 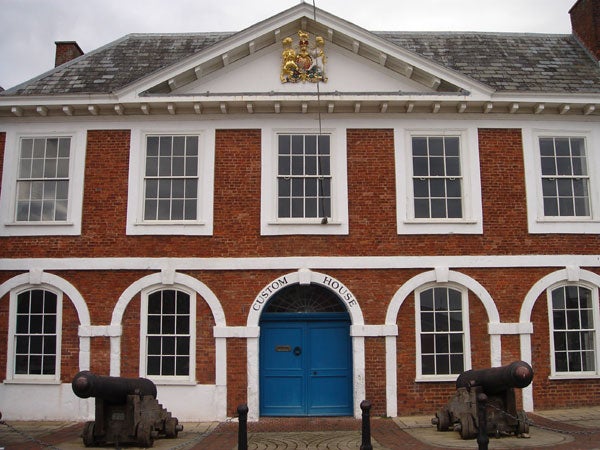 The high quality Carl Zeiss lens produces very little barrel distortion even at the wide angle setting. The parallel lines in this image barely curve at all. 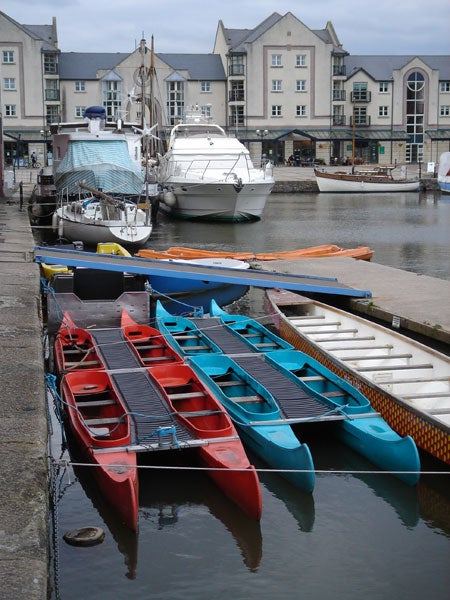 Even on a rather overcast day the M2’s colour rendition is excellent. It’s a pity the handling doesn’t match it. 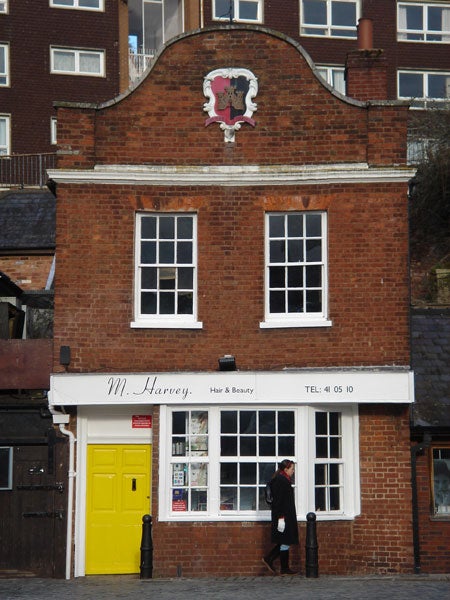 There is some evidence of over-sharpening around the letters on the shop sign, but the overall level of detail in this shot is superb. 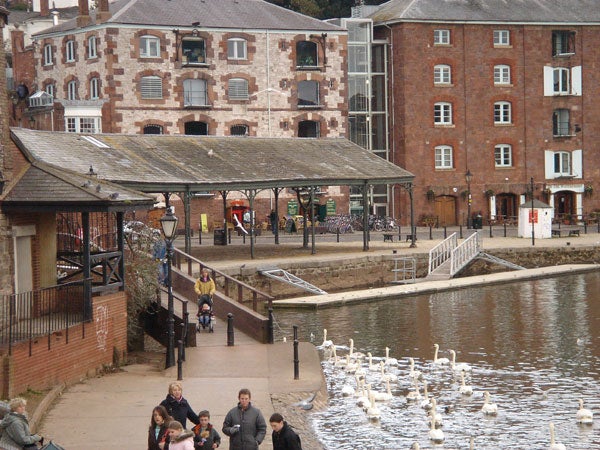 With a wide-angle setting equivalent to 38mm, the M2’s zoom lens isn’t really wide enough for panoramas, but it does a good job of capturing Exeter’s historic quayside. 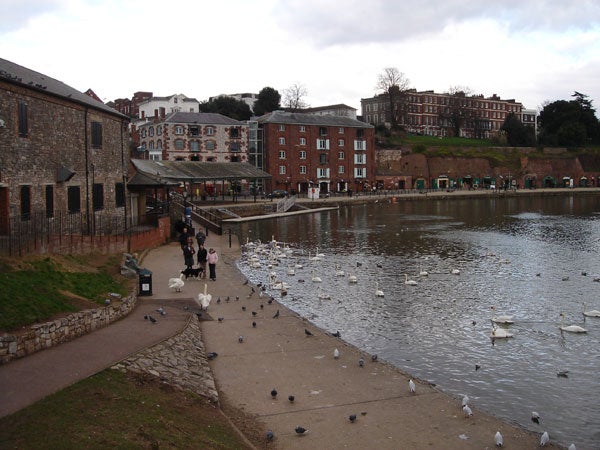 Taken from the same spot as the previous shot, this shows the difference between the wide end and the 114mm-equivalent telephoto end of the zoom range.