In recent months the long-zoom compact has become one of the busiest areas of the digital camera market, with most of the major manufacturers launching new compact cameras with 10x or greater zoom capabilities. In order to make their products stand out in such as crowded market the manufacturers have had to load their cameras up with advanced features; we’ve already seen the Fujifilm F70EXR with its revolutionary new sensor design, and of course Pansonic’s Lumix TZ10 with built-in GPS and 720p HD video and stereo audio. Last week I reviewed the new Canon SX210 IS, with its 14 megapixel sensor and 14x image-stabilised zoom lens, but today I’m taking a look at the new Sony Cyber-shot DSC-HX5, which manages to make even those outstanding cameras look a bit primitive. 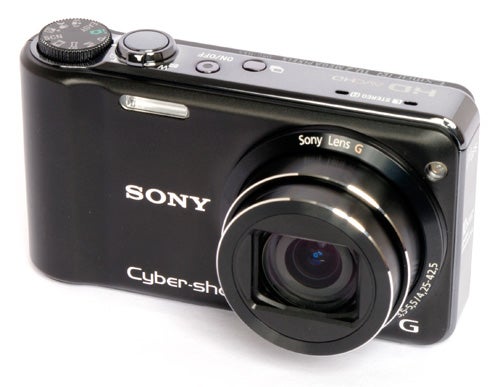 Like most of its peers the HX5 is designed more for practicality than for style, but it’s still a good looking camera, and is available in black or silver. It has an all-metal body which is rather box-like, but which has a rounded grip moulded into the right-hand end making it very comfortable to hold. It’s quite small by long-zoom compact standards, measuring 102.9 x 57.7 x 28.9mm and weighing 200g including battery and memory card.


This is quite a bit smaller and lighter than either the TZ10 or the SX210. The specification is also impressive. It has a high-quality 10x zoom lens with a 25mm wide angle and the Sony G branding of the company’s high-end DSLR lenses. The sensor is a 7.9mm (1/2.4-inch) 10.2 megapixel Exmor R CMOS chip, while the LCD monitor is a 7.5cm (3.0 inch) 230k unit which is nice and bright, although the angle of view is rather limited compared to the gorgeous screens on the Canon and Panasonic models. The HX5 has only just gone on sale this month and is available for around £300, which is pretty good value compared to its main rivals. 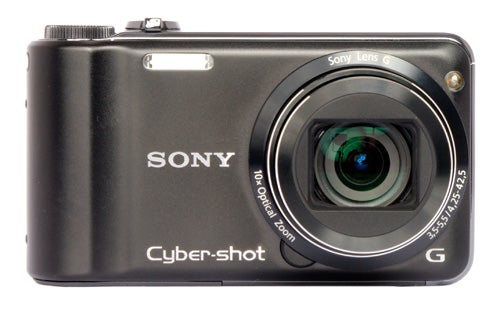 The HX5 is one of three recently announced Sony compacts featuring its new Sweep Panorama function, previously seen on the TX1 ultra-compact. This clever feature replaces the photo-stitched panorama function that has been a common feature of digital cameras for many years. Instead of taking single photos and then pasting them together in a photo editing program, with Sweep Panorama you simply pan the camera around while holding down the shutter button and it captures a rapid series images which it stitches on the fly into a single uninterrupted panoramic shot, in the case of the HX5 up to 7152 pixels wide and 1080 high. It can also be used in the vertical format to produce a 3424 x 1920 ultra-wide angle shot.

As well as the innovative Sweep Panorama function, the HX5 is loaded with even more advanced features. Perhaps the most significant is its full HD 1080i video recording mode, with stereo audio recorded via a pair of microphones on the top panel. Video is recorded in the high quality AVCHD format, which does mean you’ll need a big memory card, since a minute of HD video is around 80MB.


The video quality is superb, with a huge amount of detail, virtually no visible compression and excellent exposure and colour reproduction. The image stabilisation provides very steady hand-held shooting, and the optical zoom, which can be used while recording, doesn’t affect the soundtrack.


The sound quality is also very good, but the microphones are very prone to wind noise when shooting outdoors in even the lightest breeze. Unfortunately there isn’t any provision for an external microphone, although with the way that video recording on compact cameras is going I wouldn’t be surprised to see this on future models. 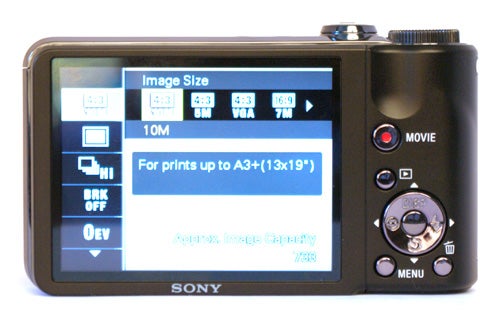 The HX5 is also the latest compact camera to feature built-in GPS location tracking, and also has an on-screen compass which appears to actually be magnetic, since it works indoors and is affected by a magnet moved near the camera.


The GPS tracker automatically adds longitude and latitude co-ordinates and direction data to the EXIF data of photos and video clips, for geotagging your shots using applications such as Google Earth or Locr. Unlike the Panasonic TZ10 the GPS doesn’t appear to have any seriously detrimental effect on battery duration, so presumably it’s not permanently active.


Another advanced feature is in-camera HDR, or High Dynamic Range imaging, which helps to improve very high contrast images. It works by taking three shots in quick succession, exposed for highlights, mid-tones and shadows in turn, and then merges them together into one picture with greatly expanded dynamic range.


One has to feel slightly sorry for Ricoh, who were the first to introduce this feature on a compact camera with their CX1 in mid-2009. Ricoh keeps on coming up with clever ideas which are then appropriated by other more popular brands. The HDR feature on the HX5 does work, but I have to say it’s nowhere near as dramatically effective as Ricoh’s implementation. 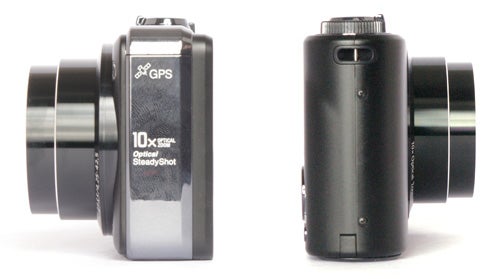 The HX5 has a list of other useful features that is too long to fully explore in this review, but some of the highlights include optical image stabilisation, D-Range Optimisation for improved results in high contrast shots, advanced face detection with smile detection and the option to set children as a priority, and a hand-held twilight mode, which helps low-light capability by taking a rapid series of shots and combining them into one blur-free image. It offers optional manual exposure with an aperture range of Features in playback include red-eye correction, sharpening, rotating and resizing, as well as the option to play a slide show with effects and music.

The HX5’s overall performance is impressive to say the least. It starts up and is ready to shoot in approximately two seconds, and shuts down again in just under three seconds. In single shot mode at maximum quality it has a shot-to-shot time of approximately 1.5 seconds, which in continuous shooting mode it three different speed settings, the fastest of which can capture ten shots at 10fps. The other settings are 5fps and 2fps. One minor niggle is that the continuous shooting mode is activated by a button on the top panel which I found myself constantly mistaking for the on/off button. 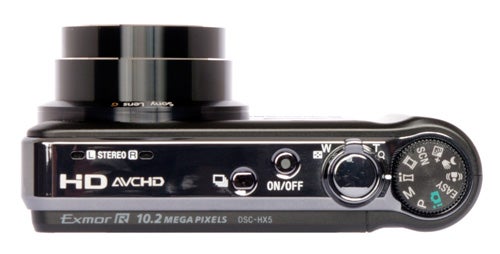 The autofocus system is also exceptionally good. It has the option of centre spot, single zone or nine-point multi-zone focusing, and is amazingly fast in all of them. It does slow down a little at longer focal lengths and n low light, but still focuses reliably and accurately even in pitch darkness thanks to an AF assist lamp with a range of several metres.


The built-in flash is fairly powerful, with a range of 3.8m at 125 ISO, but the recharge time of approximately eight seconds is a bit on the slow side. Frame coverage is excellent though, and the flash is well metered, working equally well at very close range.


Image quality is, for the most part, excellent. The Sony G lens is particularly good, producing no distortion at any focal length, with excellent edge-to-edge sharpness and not a trace of chromatic aberration. I assume that Sony has learned some tricks from its long association with Carl Zeiss, and the results are superb. The level of fine detail recorded is among the best I’ve seen from a 10MP camera, and gives the 12MP TZ10 a fair run for its money. 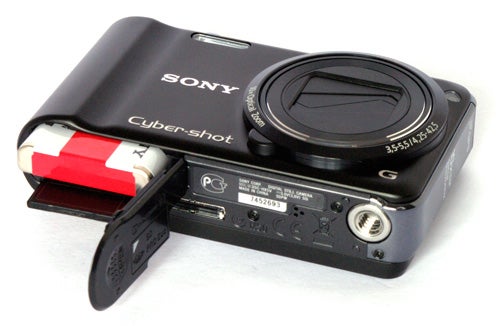 Colour rendition is also superb, with rich well-saturated colours even in slightly overcast lighting, and exposure is also generally accurate, striking a good balance between shadow and highlight detail. The only slight issue in image quality is noise reduction at higher ISO settings, which is a bit heavy-handed compared to the many excellent examples I’ve seen recently. It’s not at all bad, but there is some blurring of very fine detail at 400 ISO, and the 3200 ISO maximum setting is decidedly blotchy.

The Sony Cyber-shot DSC-HX5 once again demonstrates that when it comes to technical excellence Sony should never be underestimated. The camera is well made, handles and performs extremely well, and is capable of producing very good results under a wide range of circumstances. It is a technological tour-de-force loaded with more features than anything else on the market. 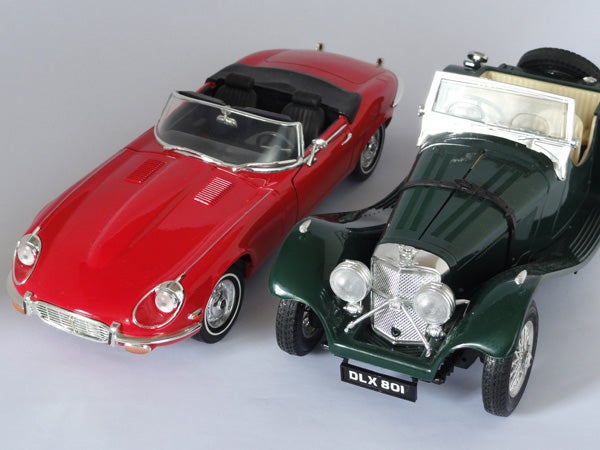 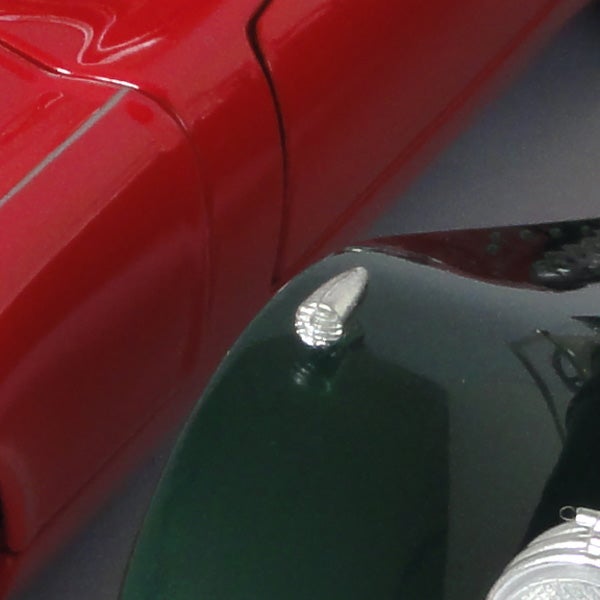 At 125 ISO the image quality is excellent. 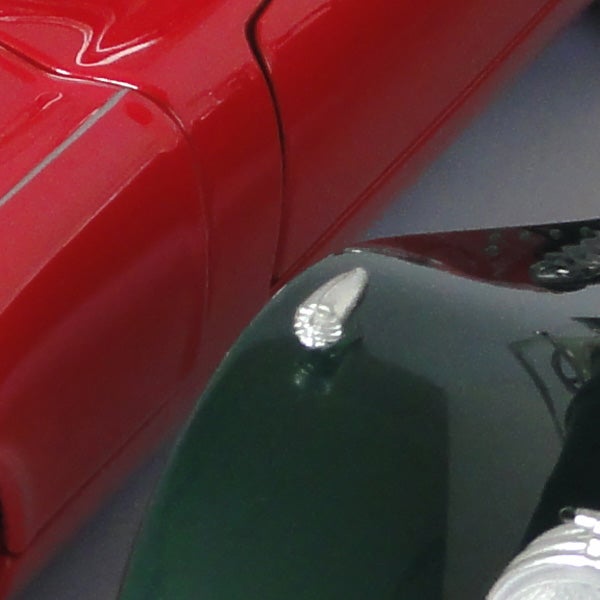 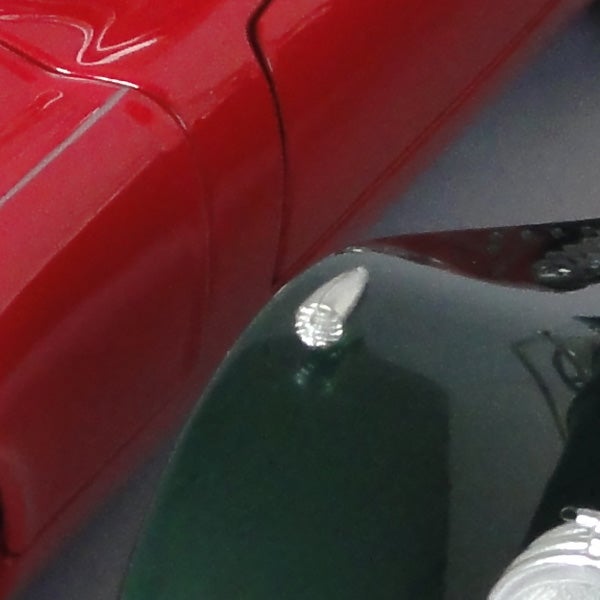 Noise reduction has started to blur out detail at 400 ISO. 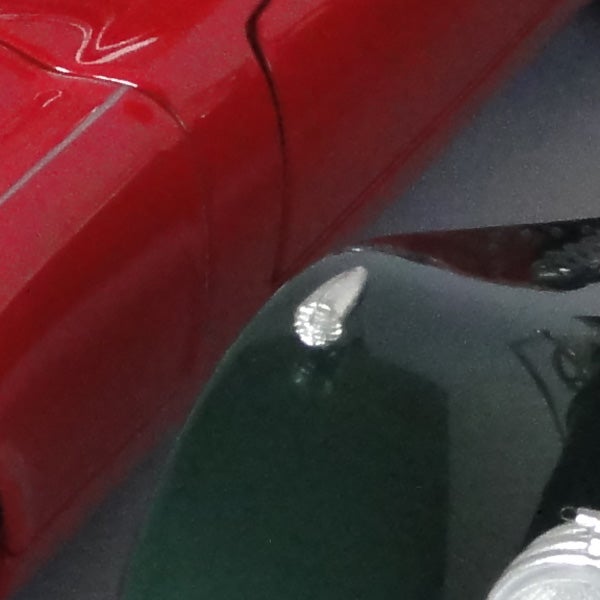 Colour gradients are still good, but more detail is lost at 800 ISO. 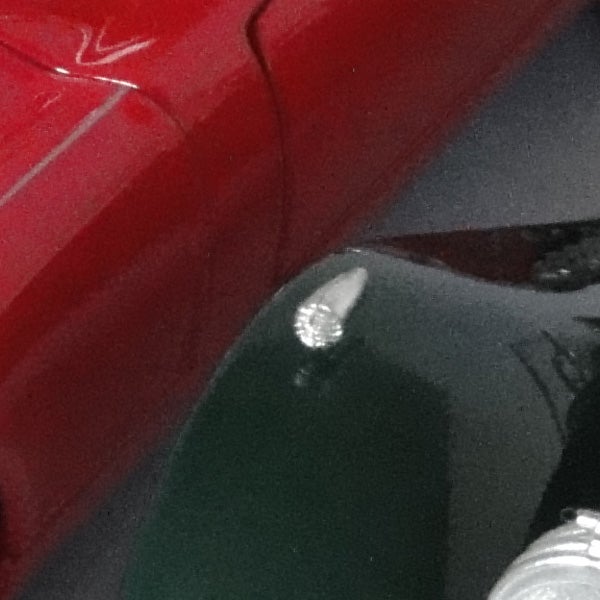 Noise is visible at 1600 ISO but colour rendition is still very good. 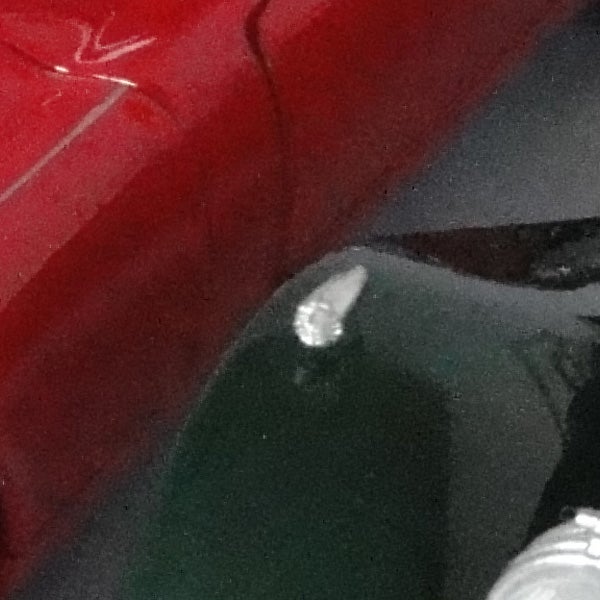 Things are getting a bit speckley at 3200 ISO. 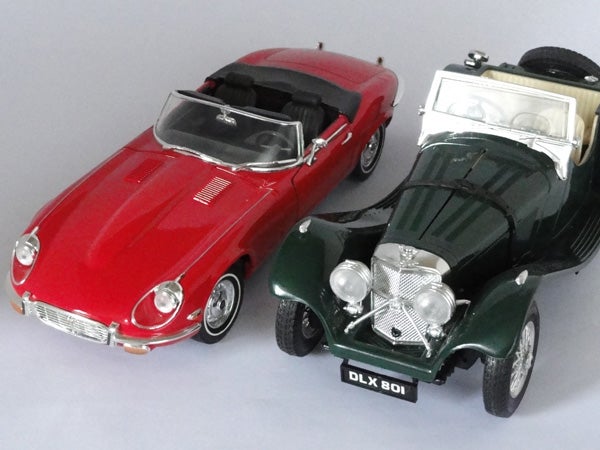 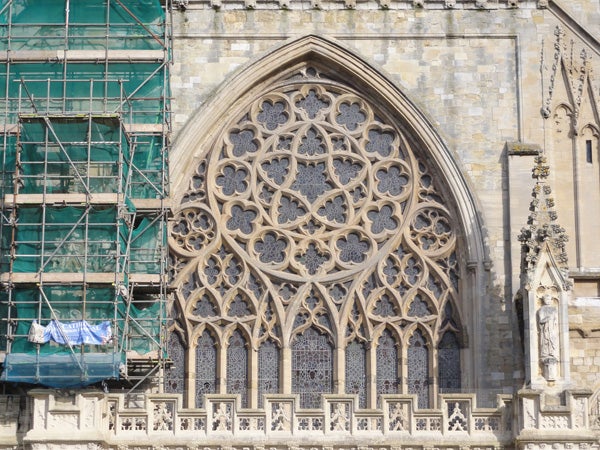 Here’s the usual detail test shot of the West Window of Exeter Cathedral, for you to compare with other cameras. See below for a full res crop, or click for the full sized image. The downloadable file is approximately 4.2MB. 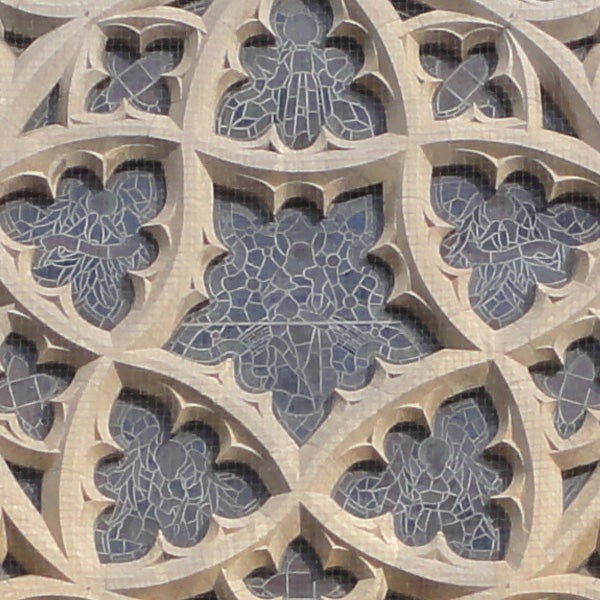 The level of fine detail is exceptionally good, especially for a 10MP sensor. 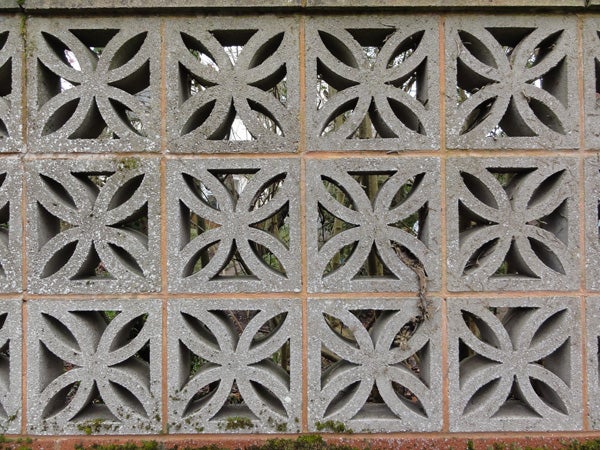 The superb Sony G lens produces no wide-angle distortion at all. 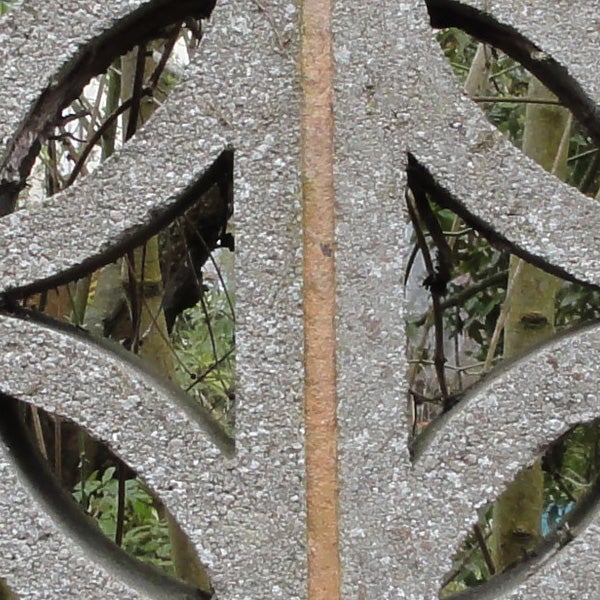 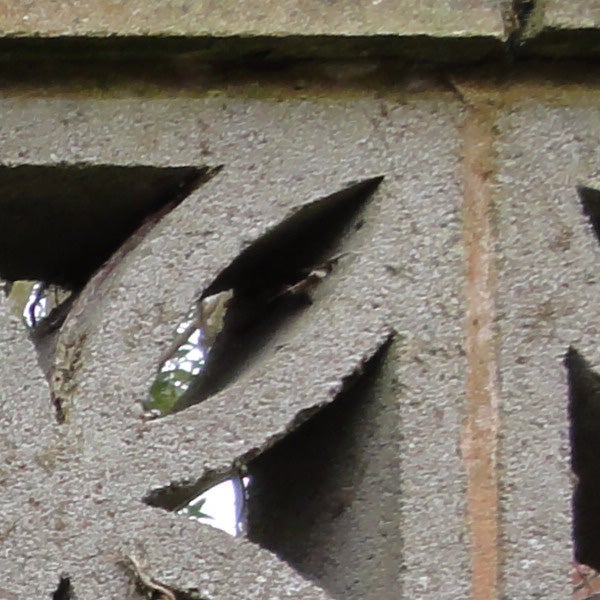 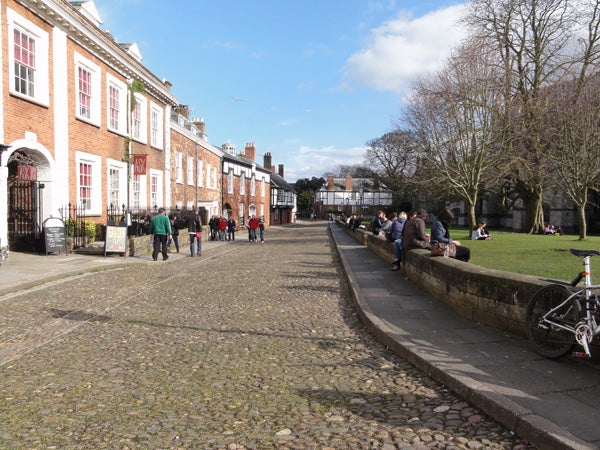 The wide-angle end is equivalent to 25mm. 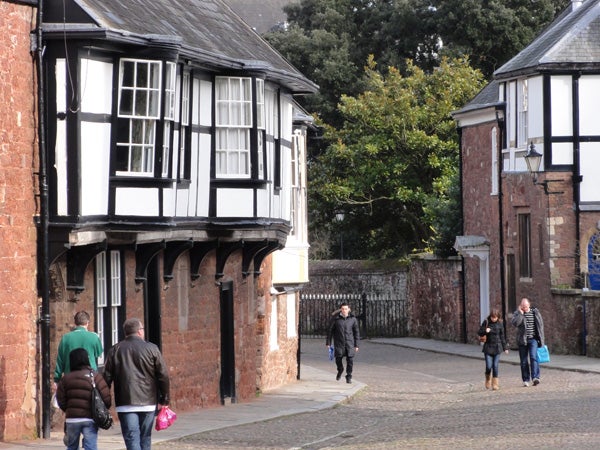 The telephoto end is equivalent to 250mm. 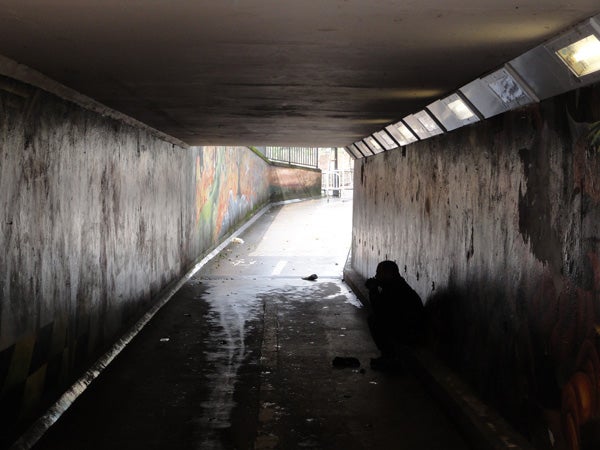 With HDR switched off there isn’t much shadow detail in this shot. 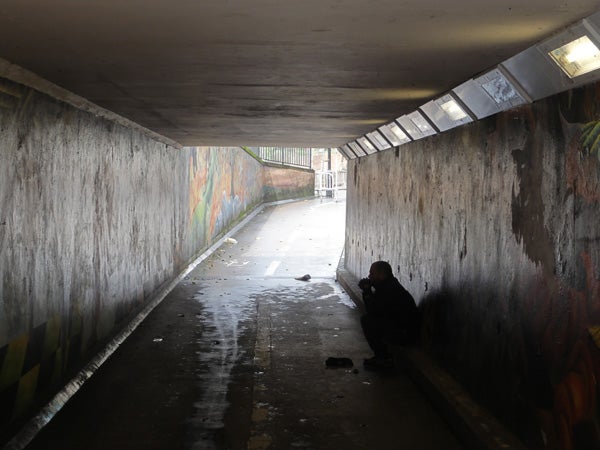 In HDR mode there is more shadow detail, but the highlights look a bit pale. 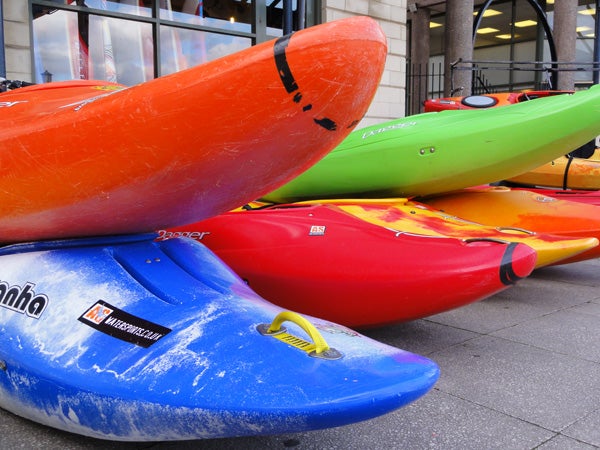 Colour rendition is superb even on an overcast day.