One of our favourite press releases of the 2012 CES in Las Vegas started like this: “Following the announcement at CES of Sony’s “Crystal LED Display”, we thought it would be helpful to send out some information and an image.” Um, you don’t say.

What really tickled us about this release, though, was the way it arrived a full two days after Sony’s main 2012 CES press releases, as Sony finally realised that it had been caught out cold by the startling TV announcements from some other brands, especially where OLED technology was concerned.

So it was that a new screen technology Sony had originally only relegated to a dark corner of a ‘future zone’ on its CES stand finally got elevated to the sort of heights that it frankly should have enjoyed in the first place. 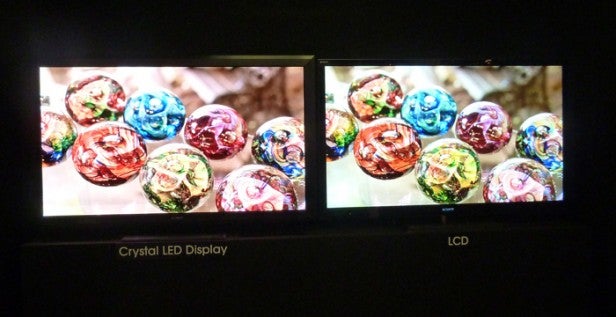 In fact, the Sony spokesperson standing next to the 55in Crystal LED demo unit even had the chutzpah on day two of the show – once it was clear that LG and Samsung’s OLED screens were stealing all the headlines – to suggest that Crystal LED (or CLED) was the next step on from OLED.

To some extent this sounded to us like a convenient excuse for Sony not having anything significantly OLED-flavoured on its stand – despite Sony claiming in the same belated Crystal LED press release mentioned earlier that it was continuing ‘development and commercialisation of organic light emitting diode (OLED) displays’.

Sony does, though, put forward two reasonably compelling arguments for its ‘next step on from OLED’ case. First and very significantly, since Crystal LED technology doesn’t use organic materials like OLED, the image quality won’t ‘decay’ over time – or at least it won’d decay nearly as fast as current OLED screens. LG and Samsung were conspicuously quiet about this OLED ticking time bomb.

The other advantage of CLED is that it’s a self-emitting device, mounting ultra-fine LEDs in each of the red, green and blue colours (adding up to nearly six million LEDs in the 55in model’s full HD incarnation). The RGB LED light source is mounted directly on the front of the display, which Sony claims dramatically improves its efficiency, leading to a wider colour gamut, expansive contrast range, ultra-quick image response time (for cleaner motion reproduction), and wider viewing angle. 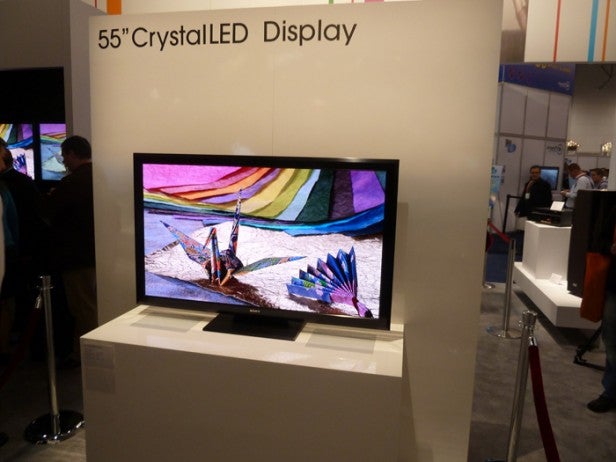 Please note that these improvements are compared with standard LED/LCD technology rather than OLED technology – a fact underlined by Sony presenting the CLED screen in a side by side ‘shoot out’ with one of its current LED models rather than an OLED screen.

From this demonstration, though, it was quickly clear that the outstanding black level response familiar with OLED certainly seems present and correct too on this CLED model. As do the facts that the incredibly deep blacks don’t come at the expense of shadow details or the brightness of any light areas in mostly dark pictures. The backlight is extremely consistent during dark scenes too.

The CLED screen also enjoyed a noticeably wider viewing angle than normal LED, and its colours were bolder and more punchy than those of any normal LED/LCD TV. Though they seemed a little ‘rougher’ and less expressive than those of the OLED sets we’ve already looked at.

Sharpness was good, but again maybe not quite as texture-rich as the images from at least the LG OLED TV. And while motion was a clear advance over normal LED/LCD, there were some minor artefacts on show during the special motion demonstration Sony was running. To us these artefacts felt more like the results of sharpness-boosting processing than genuine motion flaws, but without being given access to the TV’s set up options it’s impossible to say for sure. 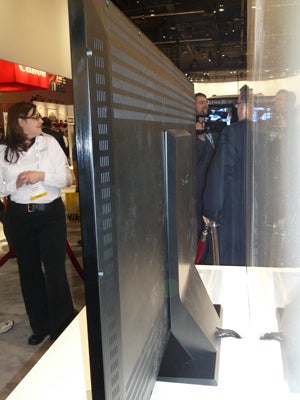 Ultimately what the Sony CLED TV felt like was what it surely is: a very early version of a potentially very interesting but currently rather ‘out there’ technology. In this respect it clearly suffered in comparison with the more complete OLED TVs on show, making Sony’s arguments that CLED is actually a generation beyond OLED harder to swallow.

We have, though, always been big fans of the sort of direct transmission flat TV pictures delivered by CLED technology, and have also long been concerned by OLED’s potential ‘degradation’ problems. So while Sony has an awful lot of work to do in product and marketing terms before it can really start a hard sell on its CLED screens, the technology is at least off to an intriguing start.