While we’re not sure we’ll ever get over the irony of Sony manufacturing Apple docks, it cannot be denied the company has an eye for style and smart design. Interestingly with the ‘V75’ (or ‘CMT-V75BTiP’ to use its catchy full name) Sony has pushed the envelope even further and produced something genuinely eye opening: the world’s thinnest iPod dock.

Design
Actually this is a controversial statement. The Teac NS-X1 is technically the world’s thinnest measuring 55mm at its slimmest point, the trouble is two thirds of the dock is roughly double that measurement. Meanwhile the Sony V75 measures 58mm at its slimmest point and tapers more gracefully to approximately 100mm. 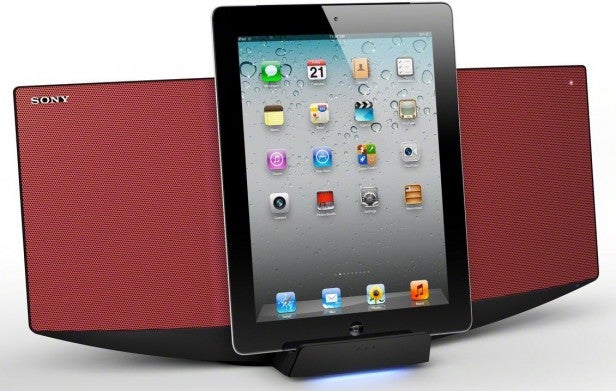 Predictably Sony’s skinny offering also has the edge on build quality. It is constructed like a malnourished Bose SoundDock Portable with metal grid speaker and matt finish (available in red or black) while it also sports a pop-out Apple dock connector at the bottom. Happily booming iPad sales mean Sony has followed the growing trend for an open connector so iPhone, iPod and iPad will all fit, but the iPad doesn’t sit as securely and – given the dock’s small size – obstructs much of the audio output.

Pop the V75 on a pair of scales and it weighs in at an expectedly light 2.9Kg. There is a separate power brick though and given it powers off the mains it isn’t quite as portable as you might think. 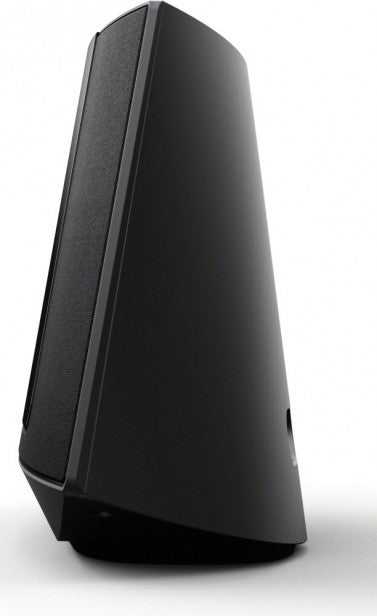 Features
A lack of inches thankfully hasn’t translated into a lack of features. Aside from the Apple dock connector, the V75 is kitted out with a slot loading CD player, DAB digital radio and Bluetooth for wireless streaming. This latter aspect ensures compatibility with almost any handset or MP3 player, but the absence of the highly impressive aptX codec is disappointing and more controversially AirPlay doesn’t make the final cut.

Before we grumble too much, however, it is worth pointing out that Sony has included something far too many docks omit: an LED display. This is top mounted which makes it easy to read and it is a great help when switching between sources, radio presets, CD tracks and equaliser settings (more of later). It also helpfully points out volume level, a hindrance which all too often can result in docks blasting your ears after you forget to adjust the volume down from a previous listen. 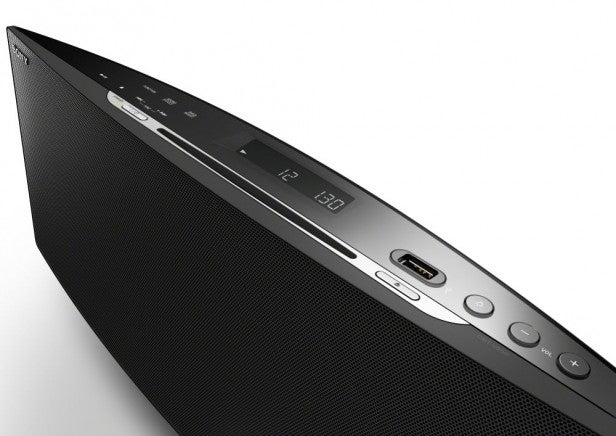 Lastly along the back you will find auxiliary in and headphone out ports along with antenna and power sockets. So how does it all come together?

Performance
Other than its slim lines, what Sony hopes will sell the V75 is its ‘Magnetic Fluid’ speakers. This technology has appeared with increasing regularity in the company’s speakers (such as the ‘RDP-X500IP‘) and is used instead of traditional speaker dampers. This allows Sony to make much slimmer speakers which theoretically produce less distortion.

A further knock-on effect of this space saving tech is it allows Sony to squeeze in larger speakers and the V75 has 2x 20W drivers for a total output of 40W as opposed to the 20W Teac was able to fit inside the NS-X1. Of course this isn’t remotely close to the larger premium audiophile docks like the Monitor Audio i-deck 200 (140W), Audyssey South of Market (200W), B&W Zeppelin Air (160W) and Libratone Live (150W), but they clearly aren’t who Sony sees as direct rivals. The V75 is a fashion product. 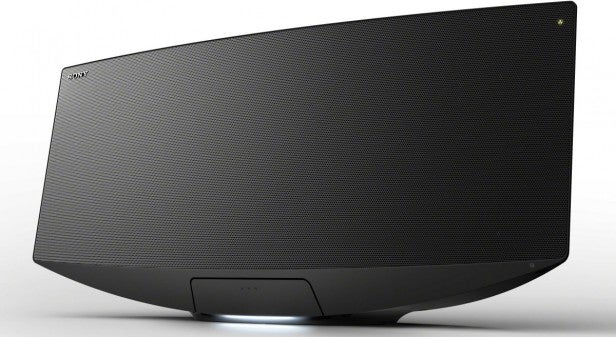 The good news is the V75’s audio performance isn’t entirely style over substance. The bad news is it still leaves a lot to be desired. On the plus side delivery is immediately warm and bassy (the near-defacto sound signature employed these days) and 40W, while not window shaking, is loud enough for a bedroom or kitchen. The trouble is over a longer period of listening it also becomes apparent that the V75 lacks both deep lows and detailed highs with audio sounding clipped of its extremes. This impacts all genres of music and the array of equaliser options (Rock, Pop, Jazz, Classic, Vocal, Hip Hop, Flat) are hefty, stereotypical jumps when more subtle adjustment is needed.

Another concern is the stereo separation. Despite its wide form factor, the V75 has a near mono delivery. This isn’t the end of the world, but it is a problem when the lows and highs leave a lot to be desired creating a muffled end result. Meanwhile Bluetooth suffers from the omission of aptX (which was so successful in the NAD Viso 1) so wireless playback is noticeably downgraded compared to direct connection to the dock or when playing a CD. 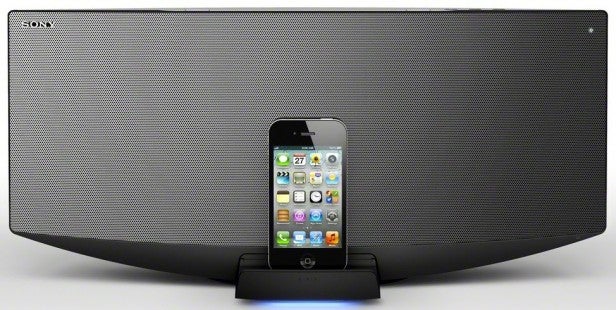 It is important to stress here that ”for the design” the V75 sounds better than you might expect (and it is a step up on the equally gaunt NS-X1), but take that caveat out and it doesn’t impress.

Value
Here we hit the second snag of a fashion product: price. A well made, very thin dock which sounds good for its dimensions is fine at the right price, but with an official RRP of £299 that drops it into the same category of the likes of the Monitor Audio i-deck 200 (£250) and Audyssey South of Market (£299). Both docks are streets ahead of the V75 in terms of performance and while they aren’t uber thin, their actual footprints aren’t significantly bigger. This causes Sony a headache because while it may not consider these models as rivals, we do. 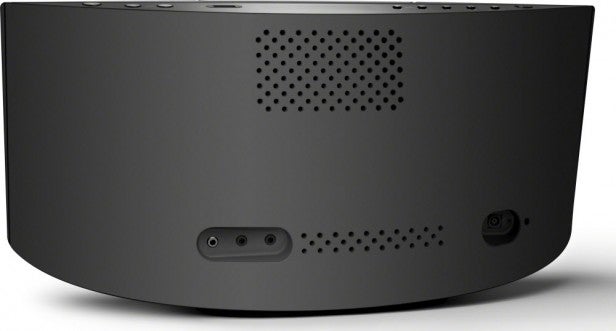 Verdict
The Sony V75 is an impressive feat of engineering. The attractive ultra slim design suggests yelling into a tin can would produce better sound quality, but it is actually reasonably loud and fairly bassy. The trouble is in reality the size saving isn’t huge compared to many premium docks and at £300 it is priced among a number of audiophile gems. Thin may be ‘in’ for many sectors of technology, but when it comes to audio no-one has yet cracked the compromise in price/performance.