Phone cameras, MP3s, streaming video… there are many aspects of technology that have arguably sacrificed quality in favour of improving convenience. As guilty as any of these is the audio dock, which has largely replaced bulky Hi-Fi systems, booting out unseemly wires at the expense of sound quality. Sony is keen to remind mainstream consumers what they’ve been missing out on. 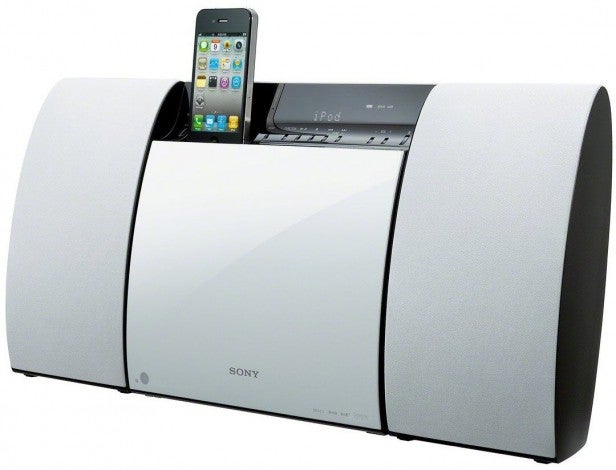 On the surface the Sony CMT-CX5 Hi-Fi system is like a dinosaur from another age. Its boxy lines are pure 80s retro, its individually wired speakers (notably hidden in press photography) will have minimalists shrieking in horror, its inclusion of a slot loading CD drive will appear pointless to today’s legions of digital converts and the DAB radio seems to celebrate a standard that largely died before it got off the ground. Sony has gone so far as to include an Apple dock connector, but there’s no AirPlay or even Bluetooth. What was it thinking? Simple, the CX5 can take the fight to docks in two key areas: audio performance and price.

This is a smart business strategy, but to a superficial audience the CMT-CX5 will have its hands full. The design will divide opinion and build quality is reasonable, but the piano black finish of the Hi-Fi remains a fingerprint magnet. And the matt plastic finish on both its sides and the speakers seems particularly cheap, with edges like the Formica plastics that haunted kitchens in the 70s – and they will also pick up bumps and scuffs easily. Equally historic are the small button controls that run along the top of the CX5, but they are responsive (no touch-sensitive tech here) and clearly labelled with power, playback, volume, function, eject (for CDs) and ‘DSGX’ – more of which later. Inputs are equally straightforward: Apple dock connector, CD slot, a 3.5mm auxiliary jack and an aerial socket for DAB. 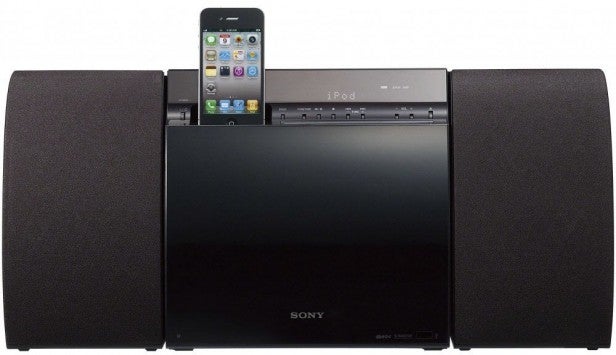 Setup couldn’t be simpler (unless you own a dock) with the Sony CMT-CX5’s clearly labelled left and right speakers wiring into the main unit along with a power cable with hefty power brick. In practice the unit isn’t as bulky as Hi-Fi phobic consumers would expect. Including speakers, the CX5 measures 520 x 245 x 100 mm and weights just 4kg, which factors in the speakers at 1kg each.

Compared to the 640 x 208 x 173 millimetres and 6.2kg of the en-vogue Bowers & Wilkins Zeppelin Air it is positively petite. In addition, given its separate speakers, the CX5’s square-ish 25 x 245 x 10mm shape can fit in most nooks and crannies with the speaker’s near 90cm cables allowing them to be positioned elsewhere. Docks-shmocks. 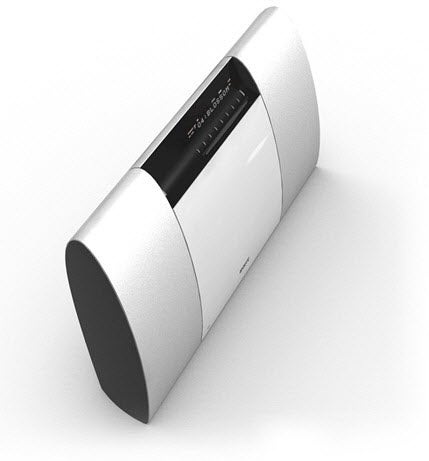 So does Sony’s master plan work? Mostly. The best aspect to the CX5 is it punches above its weight. In a literal sense at 4kg that isn’t difficult, but it pays off financially too with Sony pricing the dock around £200 and retailers subsequently slashing it to circa £160. As ever straight specs don’t tell the whole story, the CX5 has a total output of 40W RMS and throws in Sony’s ‘Dynamic Sound Generator X-tra’ processing technology (the aforementioned ‘DSGX’ button) to give things some pep, but largely underplay the unit’s abilities.

The audio performance of the Sony CMT-CX5 is pleasing. It accentuates the treble
somewhat at the expense of bass and midrange, but music is notably clear
and detailed. Sony clearly recognises this may not please the younger
big beat enthusiasts, and the DSGX mode focuses on both these two shortcomings and
is fairly successful.

It adds greater depth, and while the CX5
still isn’t bass-heavy by any means it is arguably better off for it,
maintaining impressive fidelity as the volume is cranked up. Distort creeps in a little at maximum volume (which with 40W to play with is loud,
if not window shaking), but it is saved by the CX5’s greatest
attribute: its stereo separation. 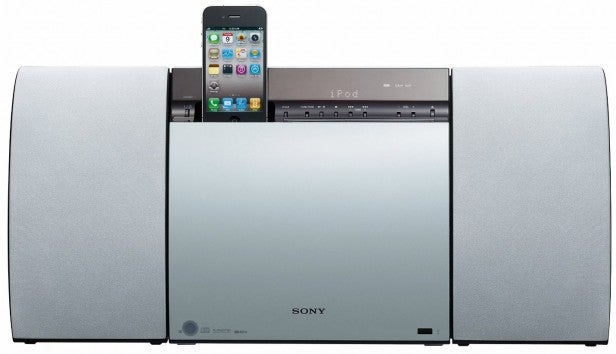 Just
as MP3s saw users forget about audio quality in favour of track
quantity, stereo separation has become a near-dead criteria for the
legions of dock buyers focused on near-mono bombastic delivery. Sony may
show the CX5 with its speakers pushed against the main unit (there is
no physical way of locking them together), but the further apart the
speakers are positioned the better they sound.

The supplied
cables for each speaker are just short of 90cm each and mean a wide
radius of sound can be created which clearly distinguishes the left and
right channels and consequently the placement of specific instruments
and effects. It also means the speakers can be positioned independently
to best fill any shape of room regardless of the Sony CMT-CX5’s primary position
and cuts down the need to max out the volume.

We’ve seen the
Arcam rCube and
Audyssey South of Market docks most faithfully recreate this by
angling their speakers at 45 degrees inside their chassis, but they
cannot compare to actual physical distance. 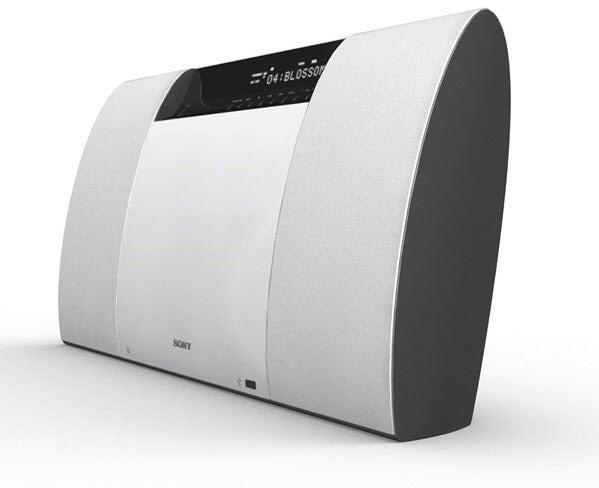 That is not to the Sony CMT-CX5 is sonically superior overall to either
of these more expensive docks. Sony is not trying to cause chaos in the
premium dock sector, but what it does is ask serious questions of those
with up to £200 to spend. In this context the CX5 easily outperforms
its similarly priced dock alternatives, gives you a CD player and DAB
radio (admittedly largely redundant for those with internet-radio-sporting devices). Other niceties include an alarm clock and sleep timer
modes, and a neat remote with bags of functionality including the
ability to navigate iPod content. Against is an almost deliberate lack
of cool, no wireless functionality and a sunken Apple dock which means
an iPad cannot be attached.

”’Verdict”’
Ultimately whether
you should buy the Sony CMT-CX5 comes down to priorities. It lacks gimmicks and may not
be as portable as an equivalent dock, but it offers a superior audio
experience to any equivalently priced dock, brings your dusty CD
collection back to life, drops in DAB for good measure and won’t break
the bank – particularly with online discounts. The CX5 is a brave move
from Sony and one it just about pulls off.