Sony’s in-car DAB head was announced to journalists way back in March 2005, but it took until nearly the end of the year for it to finally be made available to the public. Even once you could buy it there were further delays due to a shortage of the dedicated glass-mounted aerials that were required to pick up DAB signals. Was it worth the wait?


As well as offering CD playback the 6650 has a built-in FM tuner, but of course the only reason you’d be interested in this particular unit is the fact that can pick up DAB signals, without the need to resort to an expensive external box. For most people, who have no issues with existing analogue signals, DAB is something of a ‘so what’ technology. They argue that it offers little benefit with often inferior sound quality, which contrasts to how it was originally advertised as offered superior ‘CD Quality sound’.


I discussed many of those issues here but to get to the heart of the matter straight away, in an area of perfect reception for both FM and DAB, a station such as Radio One will sound better on the former than the latter. The DAB sounds fine, but the FM sounded fuller and richer. However, DAB has numerous advantages over FM such as being free of the hiss and fade, especially in poorer weather conditions. In those cases DAB will simply sound better as as long as coverage is good, it’s a more robust transmission method.


To really push DAB in this country though, there are a number of DAB only stations, many of them from the BBC, such as 1Extra for Hip-Hop, 6Music for alternative rock and BBC7 for drama and plays. The question is, how well does the DAB6650 let you enjoy them?


If you’re comfortable pulling out your current car stereo then you shouldn’t have too much trouble fitting the DAB6650. However, as I wanted to get an iPod installed at the same time, and wasn’t familiar with glass mounted aerials, I decided to leave it to the professionals and got it installed at Hendon Car Stereo a nearby car audio supplier and installer. These guys installed my Minidisc head unit a few years ago so I knew they’d do a good job.

Installation wasn’t completely straightforward as my Ford Focus factory fit unit is a non standard size, which meant I needed to get a fascia adaptor to plug the gap. I also needed to pick up a harness adaptor to connect the Sony to the wiring of my Focus. In addition, I got a steering remote adaptor so that I could continue to use the steering wheel stalk controls. At least that was the theory. The cable didn’t work so I was left having to control tracks and volume on the unit itself, though this wasn’t the fault of the Sony head unit. A Sony steering wheel stalk controller is available, but as an optional extra. The glass mounted aerial is a thin strip that was placed out of the way on the passenger side and didn’t spoil the look of the car at all.


Feature wise, the Sony has almost everything you’d expect to see in a head unit. It offers 52W over four channels, which should be plenty for most people and a major power hike over the average standard fit radio. If you need more it also has two pre-out for an external amp and sub-woofer. There’s also a remote control supplied but I can’t see ever having need for one of these as I’d have no intention of letting back seat drivers also be back seat DJs. 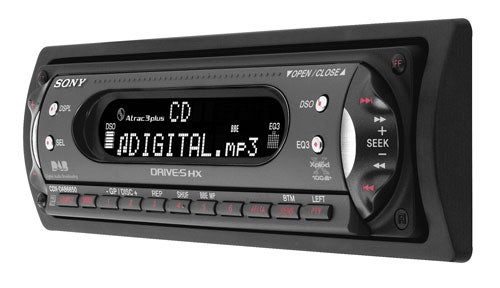 It also has auxiliary input via two RCA connections. What it doesn’t have is support to a CD or Minidisc changer, contradicting the specs that Sony had up on its web site for most of last year. Indeed it still lists this on Amazon. This means that you can’t use something like the Dension ICE Link Plus if you wanted to attach an iPod to the car. You can of course, run the iPod directly via the auxiliary inputs, but you’ll have to use something like a Belkin auto kit to provide a amplified line and charge it externally via a power socket. You only then be able to control the iPod directly, so you’ll need to also get a mounting bracket.


As well as DAB, the FM features RDS, which provides stations names over FM and automatic switching to travel reports. The CD player can also read MP3s and Sony’s native ATRAC3 Plus codec, so if you’ve got a Sony Walkman such as the HD-5 and your albums encoded into Atrac3 Plus, you can simply copy them onto a CD and play them directly.

The DAB6650 itself is smart looking. The removable face plate is curved at the front and at the sides. The left side is volume up and down and the right for moving between stations. The CD slot is hidden underneath and you just push down at the top for the curved fascia to slide down and in to reveal the CD slot, which is pretty cool.


The DAB6650 has six buttons running underneath the display for presets. However, assigning DAB stations to these presets was awkward. Instead of scanning all available stations and then listing them alphabetically as I expected, you have to search for an Ensemble (or Multiplex), a group of stations broadcast from the same transmitter. To move to a station on another Ensemble you need to do another search. So if you want a station from one Ensemble on preset one and one from another ensemble on the second preset, then it’s a long winded process, at least for the initial setup. It also takes a fraction longer to switch between stations if they are on different Ensembles. 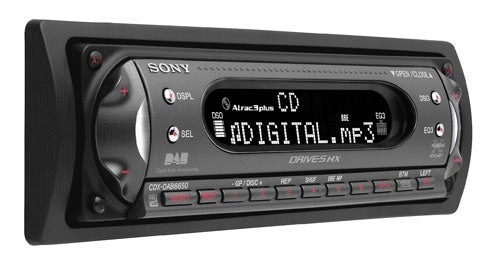 The next issue I found is that the two line fluorescent display is of too low resolution to conveniently display the amount of text information available. The top line is taken up with the station name or the Ensemble, so you’ve only got one line of display. I for one, am partial to the half-hour comedy slot on Radio 4 at 6:30 or the old shows such as the Goons on BBC Radio 7. Often a wealth of information is provided about the show but I quickly discovered that trying to read it as it slowly scrolled across the display while driving along the motorway was not a good idea. Higher resolution and more lines, would enable you to take in more information at a glance, which would be safer.


Being a Sony, there’s little chance it would be free of some sound altering features to play around with and I wasn’t disappointed. The EQ3 button on the right toggles between a number of sound shaping presets such as Vocal, Club, and Jazz and a custom option. I found that the only ones I used were the ‘Xplode’ option, which essentially jacks up the treble and bass, and the vocal setting for when I was listening to podcasts. Experimenting with the presets can be a pain though, as each time you press the button the sound drops out as the processing kicks in, and you have to scroll through them all to get to the one you want.


The other feature is called DS0. This is designed to make the sound from in door speakers appear higher up, to bring the sound closer. Of the three settings the first was tolerable, but the second and third made everything sound incredibly shrill and trebly and should be avoided like the plague.


Generally, the sound was quite bright and accurate, rather than warm, and some may find the bass lacking. On occasion I needed to add extra bass via the EQ on the iPod to get the sound I wanted, but for radio the ‘Xplode’ setting sufficed.

The difficulty I found was that the indicators for these settings, located at the far left and right of the display, are very small and barely readable during the day. The same applied to the row of buttons running along the base. The one third from left controls the TA (Traffic Announcement) function to enable or disable traffic news cutting in but it was too hard to see the label. It was much clearer at night though thanks to the backlight. The buttons are also a little on the small side.


Overall though, these are niggles and I was generally very impressed by the performance of the unit. DAB reception proved very solid along the M4 corridor that I regularly traverse, Interestingly, I tend to temporarily lose the signal as I come off the M4 at the same point every day, but the DAB6650 handles this smoothly but switching automatically to FM and back to DAB when the signal returns. Of course, that’s not much use if you’re listening to a DAB only station.


The good news is that the unit has dropped in price since it releases so if you’re are looking for a DAB unit with good sound quality then this is a safe bet. However, it really could do with a higher res display, labels that you can read during daylight and larger buttons. And if you want to integrate an iPod too, you might be put off by the lack of CD changer support, whatever the Amazon spec list says.


It has specific niggles and flaws but the fundamentals of the DAB6650 are right. DAB reception is great in areas of good coverage, sound quality is excellent and once you’ve set up your presets, it’s easy to use as well.