In case you hadn’t noticed, the home cinema projection market is no longer just about a straight face-off between DLP and LCD technologies. There’s also JVC’s rather impressive D-ILA technology to consider, as well as the similar SXRD system from Sony.


Typically, though, neither D-ILA nor SXRD technologies have been able to compete with their LCD/DLP rivals at the lower priced end of the market. Until now, at least, for sat politely on our projector stand is Sony’s brand new VPL-VW40, an SXRD projector yours for the decidedly unprincely sum of £1,905. That’s over five grand cheaper than the previous SXRD model we looked at, the VPL-VW200; which is all well and good, of course, so long as the inevitable compromises Sony has had to make to the VW40 in order to secure such an extreme price drop don’t prove unbearable. 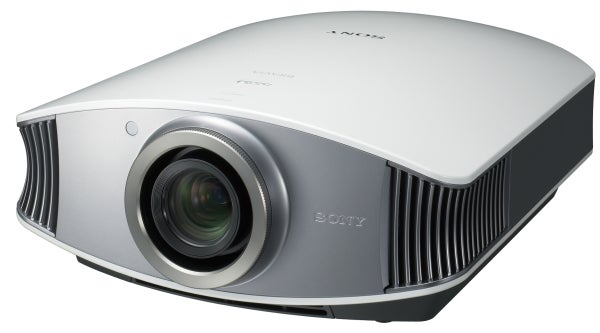 The VW40 is not quite as glamorous to look at as its premium brother, it has to be said. Its ‘icy white’ finish is less eye-catching than the VW200’s sparkly blue. But the projector still employs the same unusual but attractive diamond shape, the finish is still high gloss, and the unit’s footprint is quite a bit smaller, making it a much easier fit for the average living room.


One of the chief benefits of SXRD technology is that it manages to cram huge amounts of pixels into a very small space. So it’s no surprise to find the VW40 sporting a full HD resolution from three SXRD panels. What’s more, with the help of Sony’s Advanced Iris 2 feature, which reduces the light let through the lens during dark scenes to improve black levels, the VW40 can deliver an impressive claimed contrast ratio of 15,000:1.


As always we have to remind you that dynamic iris systems like that used by the VW40 do lead to reduced brightness in the image overall during dark scenes, and can lead to brightness ‘jumping’ if the iris system isn’t fast or ‘gentle’ enough in its operations. But we’ve certainly seen plenty of cases where dynamic irises work very well, so we’re not intending to prejudge anything about the one on the VW40.

Setting the VW40 up is unusually straightforward. A single Lens button on the remote calls up a grid-based test screen, with the option to mechanically adjust the image’s focus, zoom and vertical position and the levels of flexibility in the zoom (1.8x) and vertical shift departments is impressive, making the projector easily adaptable to almost any room size, really.


A search through the tidily presented onscreen menus, meanwhile, reveals a surprising amount of flexibility for such an affordable projector. Particularly key are its image presets, since these fundamentally alter the basic settings of the image. Not surprisingly, the one we got most joy out of with a selection of films was the Cinema preset – but there were a number of other bits and bobs we fiddled around with too to get things looking just right.


You should definitely pay the Cinema Black Pro memory option a visit, for instance, since in there you can find two critical features: the Advanced Iris options, and the facility to switch the lamp between low and high output. Both these features can have a considerable effect on the quality of the VW40’s pictures in terms of their brightness and contrast, and you should definitely play with them at length before you settle on the configuration that pleases your eye the most.

For the record, my own preference was for Auto Iris 1 and the lamp set to low, as I felt this delivered the best combination of black level and brightness to suit my fully blacked-out room.


Within an ‘Expert Setting’ submenu, meanwhile, you will also find further black level tweaks in the shape of an option to adjust a black level boosting processor, and a Gamma adjustment.


And still there’s more. For a Real Colour Processing menu option allows you to adjust the hue of a specific colour without changing the whole image, and the projector ships with Image Director 3 software so that you can fine tune the projector’s gamma settings to an almost infinite degree.


Of course, I suspect most home users won’t bother with all of this stuff; particularly the RCP and Image Director 3 software. But their presence is sure to make the VW40 a more appealing option to installation companies, so Sony is wise to provide them.


At this point it’s probably quickly worth covering some of the key things the VW40 doesn’t have that the far more expensive VW200 does. And so we find the VW200 sporting an expensive Xenon lamp to produce a wider, richer colour gamut, a contrast ratio roughly double that of the VW40, and all manner of ground breaking image processing systems designed to optimise the picture for different sources.

Not that the VW40 is entirely without any image processing, of course; in fact it’s got both Sony’s 24p True Cinema mode for enhanced Blu-ray playback, and Bravia Engine processing with its focus on improving colours, black levels, noise reduction, motion handling and detailing.


Firing up the VW40 with a Blu-ray of Mel Gibson’s Apocalypto, plus Grand Theft Auto IV from an Xbox 360 piped into it, I managed after a little picture feature tweakage to get the VW40 delivering really very impressive images indeed for its price point. 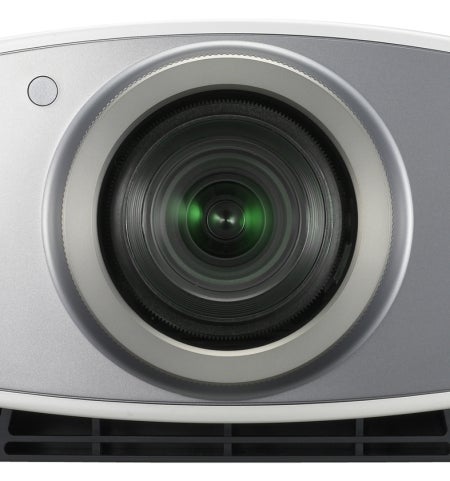 Probably the most consistent strength of SXRD technology is its sharpness, and that remains undamaged by the journey to under £2,000. The stunning levels of detail that illuminate the Apocalypto transfer from pretty much start to finish are rendered more or less immaculately by the VW40, as it reproduces every leaf of a long shot of the jungle setting, every pore on the actors’ skin, and every face in the crowd at the Temple of Sacrifice.


What’s more, it produces this outstanding amount of detail without adding any noise to the picture at all, be it grain or dot crawl. Any noise elements in the image – and there are one or two Apocalypto moments where the picture does look fizzy – are there in the source, as confirmed by running the same scenes through our reference JVC-HD100 projector. The VW40 is merely doing its job of showing every last thing in a source, good or bad.


I’m going to stay with this lack of noise a little longer, actually, for it’s also worth saying that the SXRD technology adds absolutely no technological artefacts like DLP’s rainbow effect (flickering stripes of colour in your peripheral vision) or LCD’s ‘screen door’ effect. Just be aware, though, that in order to get the very purest signal you should disable over-scanning from the VW40’s onscreen menus.


Also very impressive are the VW40’s black levels. Driving around GTA IV’s Liberty City at night is made effortlessly enjoyable by the natural, greyness-free look of the night sky around you – and by the way some good shadow detailing helps the projector deliver a really good sense of depth in dark picture areas.


Colours are natural in tone too, and superbly rendered in terms of their subtlety of blend and tonal shift.

Given how kinetic Apocalypto is with its endless fighting and chase scenes, it’s a relief as well to find the VW40 delivering motion superbly, with hardly any sense of blurring, thanks to SXRD technology’s extremely fast response times.


There are a couple of ‘issues’ with the VW40 you should be aware of, though. The first is that in order to get really, really satisfying black levels out of it you need to have the brightness of the image really scaled back, with the result that it’s probably only a good option to buy if you can use it in a well blacked out room and don’t want to drive a screen bigger than, say 150in.


The other point is that I didn’t feel its colours were quite as vibrant as those of some of the best DLP models at a similar sort of price point – especially in their ‘out of the box’ state (they improved after lots of tweaking of the gamma and RCP settings). But set against that is the Sony’s total freedom from DLP’s rainbow effect that we mentioned earlier.


The VW40 provides ample proof that Sony’s SXRD system really can work well at affordable as well as high prices. A little shortage of brightness perhaps limits its potential audience a touch, but provided you fit the criteria laid out in the last couple of paragraphs of the main review, the VW40 is really quite a cracker.