Talk about extremes. Just a couple of weeks after spending quality time with Sony’s five grand VPL-VW80 projector, we now find ourselves sharing our test room with Sony’s VPL-HW10 – a relative snip at just £1695. The question is, will the performance differences between these two projectors prove as extreme as their prices?


The HW10 starts well by looking pretty much as attractive as the VW80. Its ‘cosmic black’ body looks sturdy and – thanks to a glossy finish and some appealing curves – really very pretty. It isn’t quite as monumental, for want of a better word, as the VW80, but at the same time its size, weight and build quality are of a higher order than you usually get at the sub-£2k end of the market. 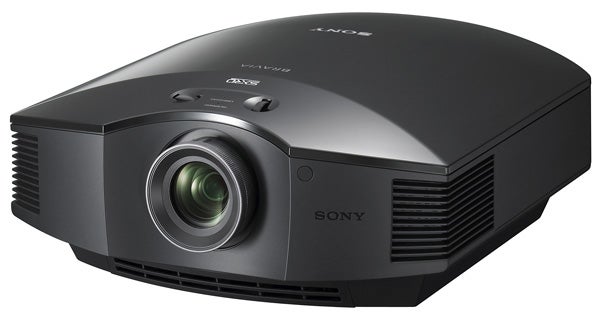 It’s well connected, too. Two CEC-enabled v1.3 HDMI inputs lead the way, which can receive the x.v.Colour and Deep Colour formats, and there’s fine support from a component video port, a D-Sub PC port, and an RS-232 port for system integration.


Inside the HW10 beats a heart made from Sony’s SXRD technology – a derivation of Liquid Crystal on Silicon (LCOS) that has JVC’s outstanding D-ILA technology as its closest technological rival.


One of SXRD’s most stand-out features is the density of its pixel structure, so it comes as no surprise to find the HW10 sporting a Full HD resolution of 1920×1080. Also catching our eye is a striking claimed contrast range – for the sub-£2k price point – of 30,000:1, achieved via a dynamic iris arrangement that adjusts the amount of light the projector emits based on an analysis of the image content to be shown. And so, for instance, if a dark scene is detected, the HW10 will close the iris down to reduce the amount of light being emitted and thus, hopefully, produce a more convincing representation of black.

As regular readers will know, there are two potential downsides to this sort of dynamic iris system: reduced brightness and the potential for scenes to shift their general brightness levels with distracting abruptness. But hopefully the HW10 will have the reaction speed and subtlety to avoid both of these pitfalls.


Setting the HW10 up proves impressively easy for a number of reasons. For starters, the projector’s zoom ratio is a respectable 1.6x, helping it adapt to a reasonable range of room sizes. It also ships with both vertical and horizontal lens-shifting ‘wheels’ to help you get the picture positioned correctly on your screen even if the projector is set to the side of or above/below the centre of your screen.


The HW10’s attractive onscreen menu system, meanwhile, is packed with bits and bobs of interest. For starters, there are two different settings for the automatic iris system, one which reduces the light output more severely than the other at the cost of more brightness.

Then there’s the Real Colour Processing engine we were so impressed with on the VPL-VW80 , which enables you to fine tune the relative position, range, colour and hue of the picture’s red, green, blue, magenta, yellow and cyan elements. As well as providing unexpected flexibility for a £1695 projector, this feature is superbly presented thanks to the way it drops out every other colour from the picture aside from the one you’re trying to adjust. This lets you see how much impact a particular hue is having on the overall picture much more easily than if you were trying to fine tune things using a fully coloured image.


Also superbly presented are the HW10’s noise reduction options, with mosquito NR and block NR options adjustable via a dual-axis ‘graph’ interface that lets you pitch the effects of the NR processing with more precision than you could if the two NR features were presented independently of each other.

Within a Cinema Black Pro menu option, meanwhile, alongside the auto iris controls lies an option to set the lamp output to High or Low. Plus you get a Film Mode that applies 2:2 or 2:3 pulldown depending on the requirements of the source, and three gamma options for adjusting the general brightness tone of the image.


One thing you definitely don’t get, though, is any of the MotionFlow processing that’s so key to the VW80. So there’s no MotionFlow system for smoothing out movement, and no Film Projection mode for inserting blank frames into the image to reproduce a viewing effect more reminiscent of a celluloid projector at a cinema.


You do get Sony’s Bravia Engine 2 processing, though, with its focus on improving various picture elements including colours, contrast and sharpness. And we’re happy to say that this processing system helps standard definition images look unusually good for such an affordable projector. The lack of noise in standard def pictures is particularly impressive, but they also look sharper than we’d normally expect – provided, at least, the source you’re watching is of a decent quality in the first place. 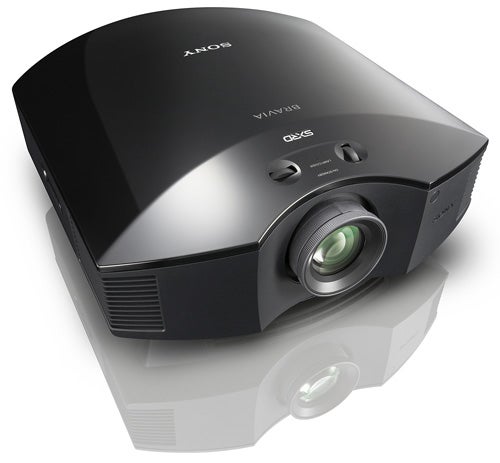 As you’d expect, though, the HW10 really springs to life once you’ve given it an HD source to work with. At this point SXRD’s traditional abilities with fine detail come to the fore, presenting every last pixel of image data in highly textured Blu-rays like ”Batman Begins” with absolute precision, but without any unwanted grain or other noise to accompany the sharpness.


It’s worth adding here that despite their acute sharpness, the HW10’s HD images are free from any of the grid-like patterning sometimes seen with rival LCD projectors, demonstrating the benefits of the SXRD’s extremely dense pixel configuration.


Turning to the HW10’s handling of motion, it’s actually pretty good despite the lack of MotionFlow processing. Images crossing the screen don’t lose any significant resolution, and the amount of judder is pretty low – though obviously there’s nothing like the same almost eerie fluidity seen with the VW80.

Yet more good news concerns the HW10’s colour handling. Tones across the colour spectrum are impressively believable – especially when considered against the rather pallid efforts of the VPL-VW40 model that marks Sony’s previous entry-level SXRD option.


It doesn’t harm the colour situation, either, that the HW10’s extremely fine pixel density allows colour blends to appear with the sort of satisfying subtlety that helps objects in pictures look more three-dimensional and solid.


The single biggest surprise with the HW10’s pictures, though, is how good its black levels are. This has tended to be a weakness with previous value-oriented SXRD projectors, but the HW10 presents a really natural contrast range ranging from vivid peak whites down to more than decent blacks. What’s more, those blacks look stable despite the machinations of the dynamic iris, and even manage to retain solid amounts of shadow detail for the majority of the time.


It’s worth noting that the best black level results are achieved with the Auto iris system set to level 2 and the lamp output set to low. But at the same time my personal feeling is that the best iris settings for the picture overall are to have the lamp set to high and the iris set to level 1, since this puts a bit more ‘punch’ into proceedings. 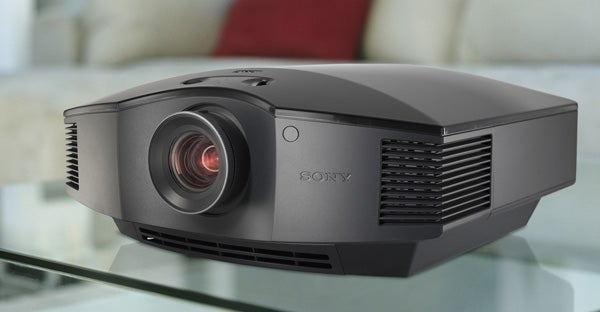 More good news about the HW10 concerns its running noise. For even with the lamp output set to high we hardly ever noticed the sound of its cooling fans. And even when we did pick the sound up, it is so low-level as to be almost soothing.


There are, inevitably, reasons why the HW10 costs less than a third as much as the VPL-VW80 . For instance, the cheaper model’s pictures aren’t as bright, its black levels aren’t as deep, and its colours are slightly less vibrant. But with regard to the VW80’s MotionFlow functionality, we really didn’t find ourselves missing it all that much, to be honest. And for me, even the differences in brightness, contrast and colours aren’t as acute as the £3,500 price difference might imply.


More tellingly, perhaps, the HW10’s colours also aren’t as richly saturated as those of one or two similarly priced DLP projectors. DLP projectors can also deliver slightly deeper black levels, especially when an image contains a combination of dark and bright content (a scenario which causes noticeable crushing in the HW10’s black level range). But the HW10 has the edge over DLP when it comes to clarity and running noise, and most tellingly of all it doesn’t suffer with DLP’s rainbow effect noise.


With JVC currently refusing to move significantly under £2,700 with its outstanding D-ILA technology, we’ve long felt that there’s a real chance for Sony’s rival SXRD system to make inroads at the budget end of the market. And happily, with the HW10 Sony has finally delivered an affordable budget SXRD option that has enough quality to grab that budget market chance with both hands.